Salinity is one of the most important stresses that reduces plant growth and productivity in several parts of the world. Nine Tunisian durum wheat genotypes grown under hydroponic conditions were subjected to two levels of salt stress (100 and 170 mM NaCl) for 21 days. An integrative analysis revealing the impact of salinity on key phenotypic and physiological marker traits was then conducted. Principal component analysis grouped these traits into three different clusters corresponding to the absence of salt stress and the two levels of salt stress. This analysis also allowed the identification of genotypes exhibiting various levels of tolerance to NaCl. Among the nine genotypes of Triticum durum Desf., cultivar Om Rabiaa was the most tolerant whereas cultivar Mahmoudi genotype was the most sensitive. Following the multivariate analysis of the examined phenotypic and physiological traits, we found that shoot length, shoot fresh weight, leaf area, the whole-plant stable isotope ratios of nitrogen (δ15N), shoot ammonium and proline contents, and shoot glutamine synthetase activity could be used as markers for the selection of salt-tolerant wheat genotypes. View Full-Text
Keywords: carbon; durum wheat; genotypes; salinity; markers; nitrogen carbon; durum wheat; genotypes; salinity; markers; nitrogen
►▼ Show Figures 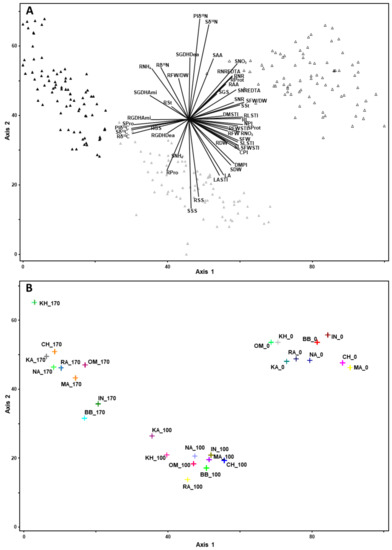