Leaf senescence represents the last stage of leaf development and is highly regulated by plant hormones and environmental factors. Leaf senescence limits growth and yields in crops, leading to a significant portion of agricultural loss. It is thus crucial to develop strategies to delay this physiological process. Melatonin, an extensively studied molecule, has been demonstrated to play a role in the regulation of leaf senescence in plants. Here, we report the role of exogenous melatonin in the alleviation of methyl jasmonate (MeJA)-induced senescence in tomato (Solanum lycopersicum) leaves. The application of melatonin led to slower degradation of chlorophyll, reduced electrolyte leakage, decreased malondialdehyde (MDA) content, and reduced reactive oxygen species (ROS) levels in tomato leaves incubated with MeJA. In addition, melatonin repressed the upregulation of senescence-related genes (SAG and SEN) and chlorophyll degradation genes (SGR1 and PAO) in tomato leaves exposed to MeJA. Furthermore, melatonin stimulated the activity of a Calvin-Benson Cycle enzyme sedoheptulose-1,7-bisphosphatase (SBPase) and alleviated the inhibition of SlSBPASE (tomato SBPase gene) expression and in MeJA-treated tomato leaves, suggesting an action of melatonin on the capacity for carbon fixation during senescence. Collectively, these results support a role for melatonin in the alleviation of MeJA-induced senescence in tomato leaves. This work also presents a case study that melatonin may be a useful agent in the delay of crop senescence in agricultural practice.
Keywords: melatonin; senescence; chlorophyll; reactive oxygen species; photosynthesis; tomato melatonin; senescence; chlorophyll; reactive oxygen species; photosynthesis; tomato

Senescence is the final stage of leaf development and is highly regulated by internal factors, such as developmental age and hormone level, and environmental factors, including drought, heat, dark, nutrient deficiency, and UV-B irradiation [1]. Senescent leaves undergo dramatic changes in gene expression, metabolism, and cell structures. The most noticeable feature of leaf senescence is the loss of chlorophyll as a consequence of accelerated chlorophyll degradation [2]. In addition, during senescence, the expression of senescence-associated genes is largely boosted, while the expression of photosynthesis-related genes is dramatically down regulated [2,3,4,5]. Another important characteristic of leaf senescence is the excessive accumulation of reactive oxygen species (ROS) caused by an imbalance between production and scavenging of ROS [6,7]. Although it is an evolutionarily developmental process important for optimal production of offspring and survival of plants under some unfavorable environmental conditions, leaf senescence limits growth and yields in crops, leading to a significant portion of agricultural loss. It is thus crucial to understand this physiological process so as to develop strategies to control and delay this process.
Melatonin (N-acetyl-5-methoxytryptamine) has gained widespread attention among biologists since it was first discovered in the bovine pineal gland [8]. The physiological functions of this molecule in animals have been extensively investigated. It has been demonstrated that melatonin plays diverse roles in the regulation of circadian rhythms, mood, sleep, body temperature, retina physiology, sexual behavior, seasonal reproduction, and the immune system in humans and animals [9,10]. In 1995, two groups identified the existence of melatonin in plants [11,12], and since then, melatonin has been found present in a variety of plant species. A great many studies have documented the diverse functions of melatonin in plants. The well-established role of melatonin is to act as an antioxidant in plants. Melatonin enhances antioxidative potential by stimulating activities of antioxidant enzymes and increasing levels of non-enzymatic antioxidants, thereby reducing lipid peroxidation and relieving oxidative stress [13,14]. As an indoleamine, melatonin also functions as an auxin-like hormone in the regulation of the growth of roots and shoots in different species, including tomato, cucumber, maize, wheat, and soybean [15]. Melatonin has been further found to play critical roles in the responses to environmental stresses in plants, such as drought [16,17], cold [18,19,20], heat [21], salinity [22,23], heavy metal toxicity [24], and methyl viologen-induced oxidative stress [25,26]. Additionally, melatonin acts as a signaling molecule that plays a role in the defense against pathogens in plants [27,28].
Melatonin also slows down the process of stress-induced senescence in plants. The role of melatonin in the delay of senescence has been observed in a number of species, such as Arabidopsis, apple, grape, cucumber, rice, peach, ryegrass, cassava, and kiwifruit [22,29,30,31,32,33,34,35,36,37]. It has been shown that melatonin delays dark-induced senescence and reduces chlorophyll degradation in barley leaves [38]. The observation that melatonin suppresses the upregulation of senescence-associated genes in leaves of drought-induced senescence in apple trees further supports the role of melatonin in the regulation of senescence [29]. In a recent study, it has been shown that melatonin delays senescence of kiwifruit leaves by improving antioxidant capacity and enhancing flavonoid biosynthesis [36]. Melatonin has also been implicated in the prevention of chlorophyll degradation by downregulating chlorophyll degradation enzymes, such as chlorophyllase and pheophorbide a oxygenase [39]. Importantly, the mutation of a rice gene OsMTS1, which codes for a methyltransferase in the melatonin biosynthetic pathway, reduces melatonin production and triggers premature leaf senescence in rice leaves, providing direct evidence for the role of melatonin in the leaf senescence [40].
Jasmonates (JAs) are a group of plant hormones, including jasmonate acid and its derivatives, such as methyl jasmonate (MeJA) [41,42]. JAs have been documented to mediate multiple plant developmental processes and stress responses in plants [43,44,45,46,47]. A number of studies have established a role for JAs in the induction of leaf senescence in both model species and crop species, including Arabidopsis, maize, and rice [48,49,50]. Recently, JA has been shown to induce leaf senescence in tomato plants [51]. However, the interplay between JA and melatonin remains largely unclear.
The objective of this study was to investigate whether melatonin influences the process of MeJA-triggered leaf senescence in tomato plants. In this work, we found that exogenous melatonin slowed down chlorophyll degradation, reduced electrolyte leakage, and decreased the inhibition of photosynthetic capacity in MeJA-treated tomato leaves. In addition, we observed that melatonin suppressed the upregulation of senescence-associated genes and chlorophyll degradation genes in MeJA-treated tomato leaves. Interestingly, melatonin alleviated the JA-induced inhibition of SlSBPASE expression and sedoheptulose-1,7-bisphosphatase (SBPase) activity in tomato leaves. These results support a role for melatonin in the alleviation of MeJA-triggered senescence in tomato leaves.

For measurement of chlorophyll content, 4 detached leaves were collected from one repeat following different treatments. Leaf discs were punched with a cork borer from 4 leaves and were pool incubated in 80% acetone (v/v) in the dark until leaf discs appeared colorless. The same procedure was taken for another two repeats. Absorbance at 647 and 664 nm was measured and used for the calculation of chlorophyll content according to the formula 20.3 × A647 − 8.04 × A664. The results were presented as the average of three repeats.

Leaf samples were collected following treatment to determine the accumulation of H2O2 and O2−. The H2O2 was extracted with 5% (w/v) trichloroacetic acid and measured by monitoring the absorbance of the titanium-peroxide complex at 410 nm according to a previous study [52]. O2− was detected using nitroblue tetrazolium (NBT), as previously reported [53].

Leaf samples were collected following treatment to determine malonaldehyde (MDA) content, as described previously [54,55]. MDA was extracted with trichloroacetic acid and assessed using thiobarbituric acid. Absorbance of the supernatant at 450, 532, and 600 nm was measured for the quantification of MDA.

Leaf samples were collected following treatment for the measurement of SOD and CAT. Leaf samples (0.1 g) were extracted with 50 mM potassium phosphate buffer (pH 7.0) containing 0.1 mM EDTA and 1% polyvinylpyrrolidone (w/v). The extraction was centrifuged, and the supernatant was used for measurement of activities of SOD and CAT, as described previously [57,58].

Leaves from different treatments were dark-adapted for 30 min, and minimal fluorescence from a dark-adapted leaf (Fo) was measured with a portable fluorometer (PAM-2000, Walz, Germany), and following a saturating pulse, maximal fluorescence from a dark-adapted leaf (Fm) was obtained, which allowed us to calculate maximum photochemical efficiency (Fv/Fm). Carbon assimilation rate was measured with a portable photosynthesis system (LI 6400, LI-COR Biosciences, Lincoln, NE, USA).

Relative transcript abundance was measured using quantitative real-time PCR, as previously described [61]. RNA was extracted from leaves following different treatments and was used as a template for cDNA synthesis. Quantitative real-time PCR was performed using SYBR® Premix Ex TaqTM according to manufacturer’s instructions (TaKaRa, Dalian, China). The tomato actin gene (GenBank Accession No. AB695290) was used as a reference gene. Each real-time PCR reaction was performed in a 25 µL final volume on an iQ5 Multicolor Real-Time PCR Detection System (BIO-RAD, Hercules, CA, USA) with the following program: 1 cycle of 30 s at 95 °C, followed by 40 cycles of 5 s at 95 °C, 30 s at 60 °C. The primers used in this study are listed in Table 1.

The values presented in this study are the means ± SDs. Student’s t-test test was performed to compare the difference between treatments. Asterisks indicate significant difference at ** p < 0.01 or at * p < 0.05.

To validate the involvement of melatonin in the regulation of MeJA-induced senescence in tomato leaves, we examined the expression of senescence-related genes, including SAG (senescence-associated gene, Solyc02g076910.2) and SEN (senescence, Solyc12g008460.1), chlorophyll degradation genes, including SGR1 (senescence-inducible chloroplast stay-green protein 1, Solyc08g080090.2) and PAO (pheide a oxygenase, Solyc11g066440.1). SAG, SEN, SGR1, and PAO were dramatically upregulated by MeJA treatment, confirming that senescence was induced by MeJA in tomato leaves. However, melatonin pretreatment significantly suppressed the upregulation of SAG, SEN, SGR1, and PAO in tomato leaves incubated with MeJA. No significant changes in the expression of these genes were found in the control leaves and leaves pretreated with melatonin but without subsequent MeJA treatment (Figure 2). These results suggest that melatonin influencing MeJA-induced senescence by inhibiting the expression of senescence-related genes and chlorophyll degradation genes.

It has been reported that ROS is involved in the trigger of leaf senescence [22]. To evaluate whether the role of melatonin in the alleviation of MeJA-induced leaf senescence was associated with the alteration of ROS content, we measured the levels of H2O2 and O2− in tomato leaves pretreated with or without melatonin that had been subsequently subjected to MeJA treatment. The results showed that exposure to MeJA substantially enhanced accumulation of H2O2 and O2−, while exogenous application of melatonin suppressed the MeJA-induced enhancement of H2O2 and O2− levels in detached tomato leaves (Figure 4). The levels of H2O2 and O2− did not show significant difference between control leaves and those pretreated with melatonin but without subsequent MeJA treatment. These results suggest that melatonin mitigates MeJA-induced senescence, at least partly, by reducing ROS content.

Sedoheptulose-1,7-bisphosphatase (SBPase) is an enzyme in the Calvin-Benson cycle and has been demonstrated to be crucial for photosynthetic carbon assimilation, growth, and stress tolerance in tomato plants [20,62]. A previous study has revealed that MeJA suppresses the expression of SlSBPASE (Solyc05g052600.2) that encodes SBPase in tomato. In this study, we found that the expression of SlSBPASE was severely suppressed in tomato leaves incubated with MeJA for 5 d, while melatonin pretreatment significantly relieved the suppression (Figure 7A). Consistent with SlSBPASE expression, SBPase activity was dramatically decreased by MeJA, while it was promoted by melatonin pretreatment in MeJA-treated tomato leaves (Figure 7B). These results suggest that melatonin may be involved in the regulation of MeJA-induced leaf senescence by acting on the photosynthetic carbon fixation process.

Designed the study, F.D. and M.W.; conducted the experiments and analyzed the data, F.D., T.Z. and M.W.; wrote the manuscript, F.D.

This work was supported by grants from the Ministry of Science and Technology of China (2015BAD07B05) and China Postdoctoral Science Foundation (2018M633593). 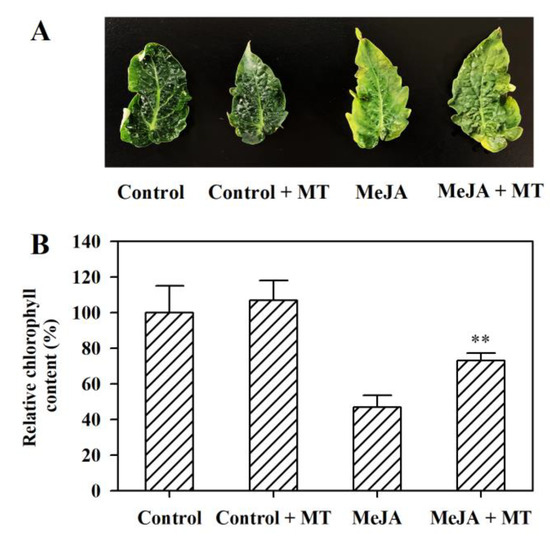 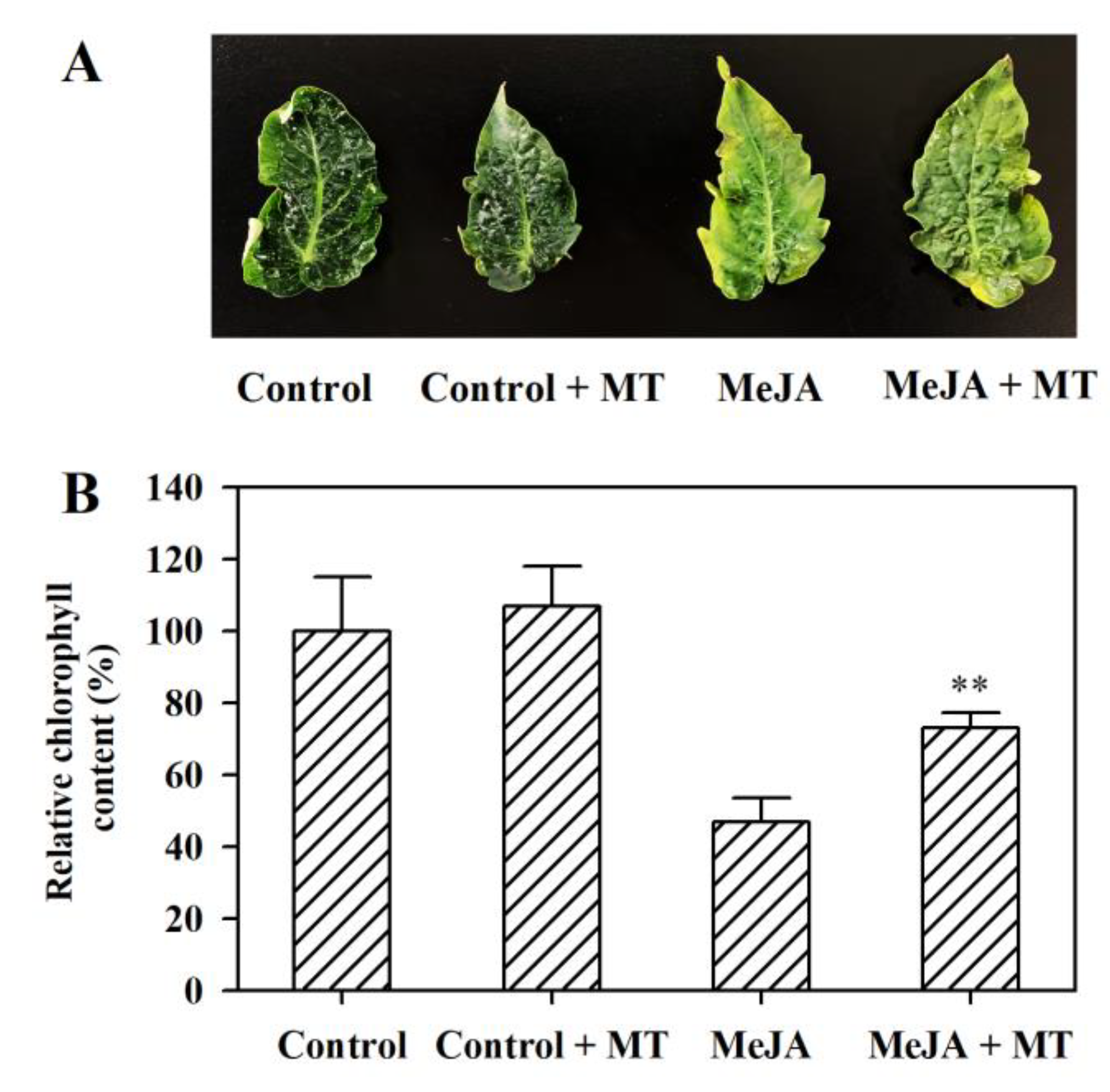 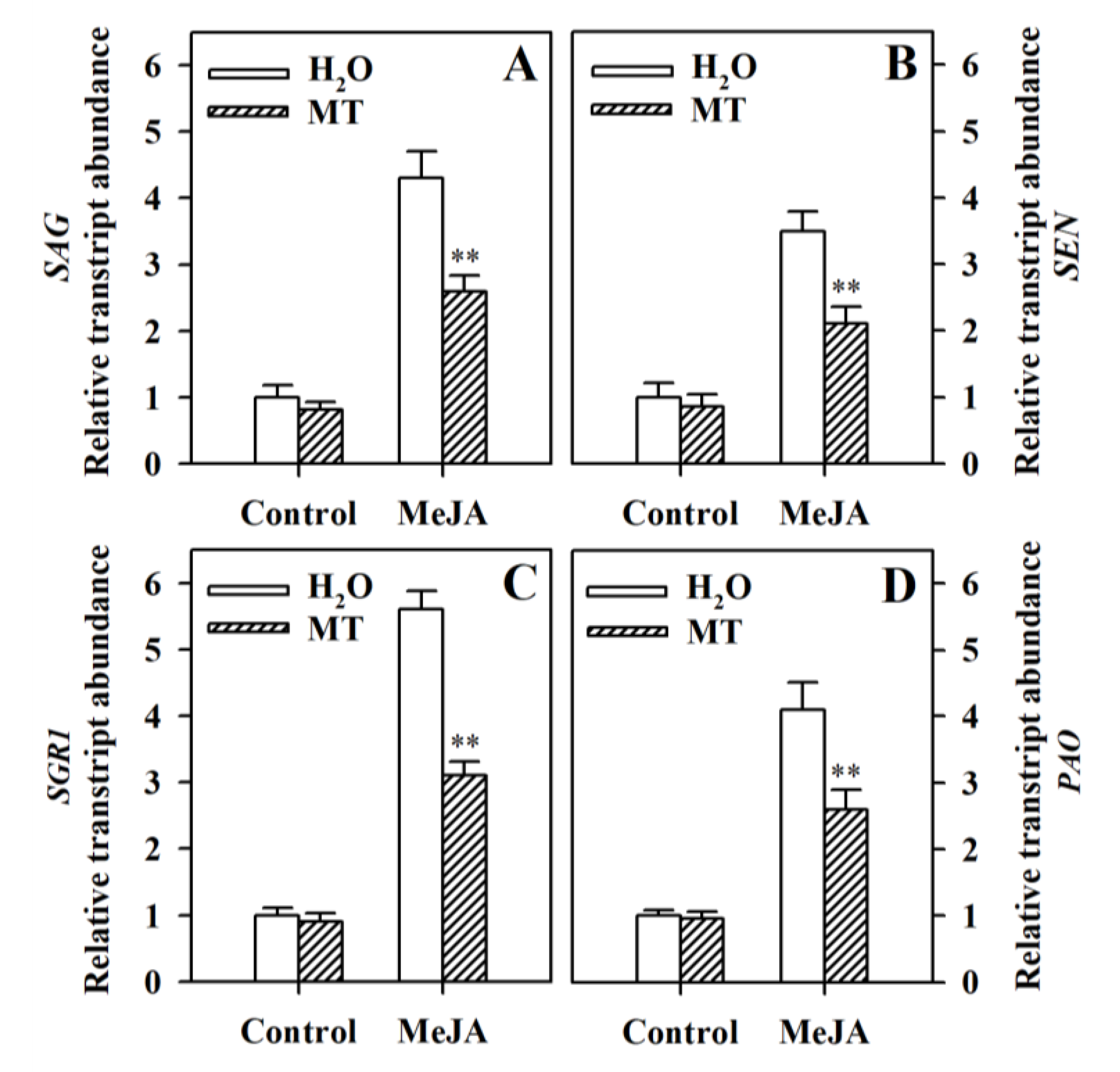 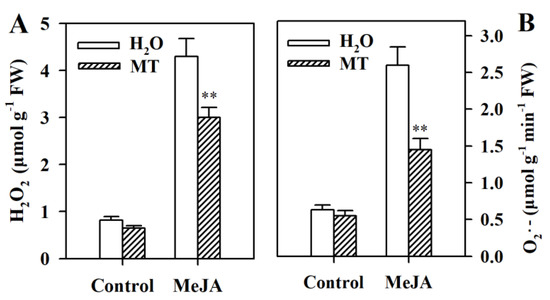 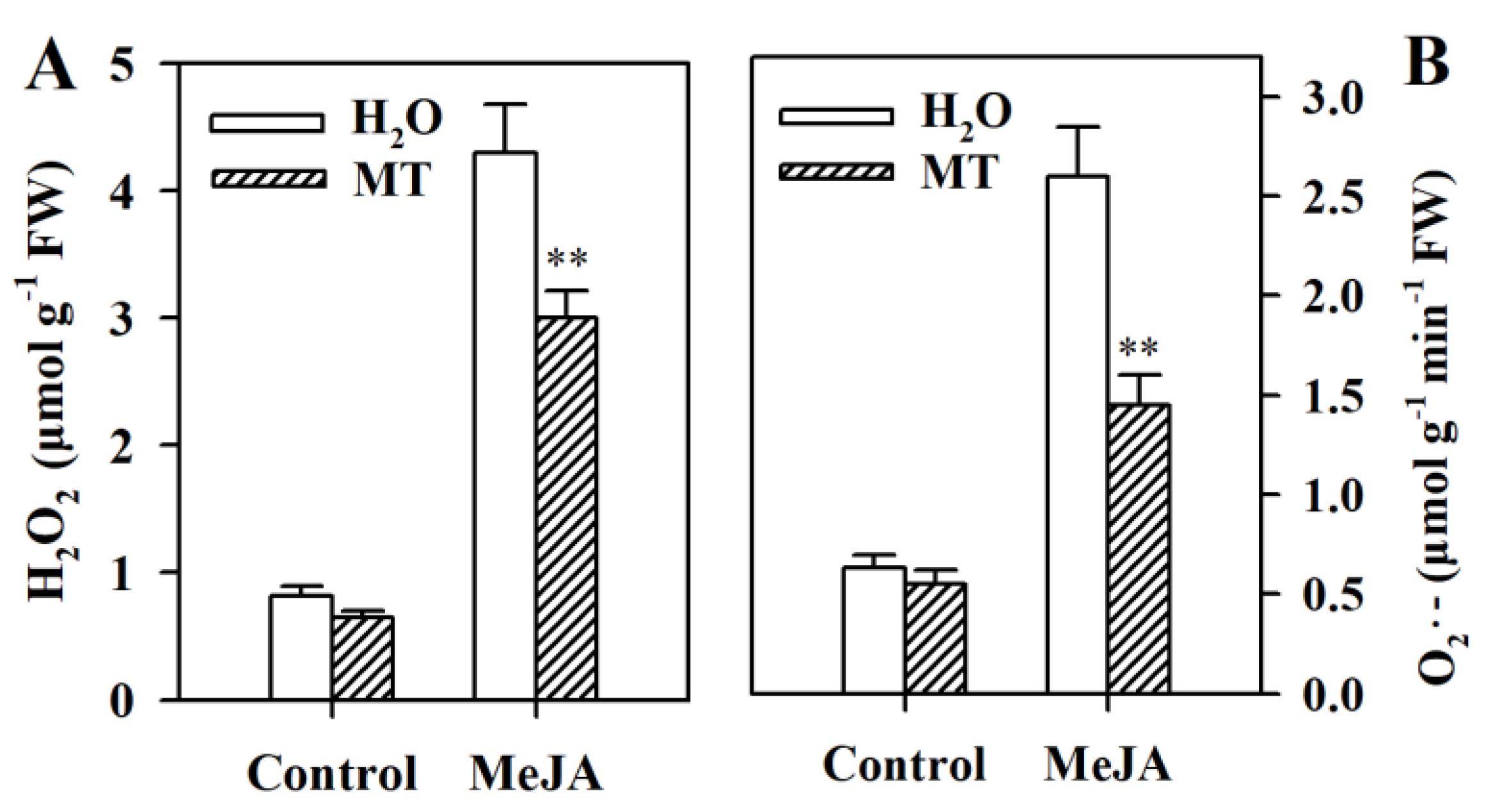 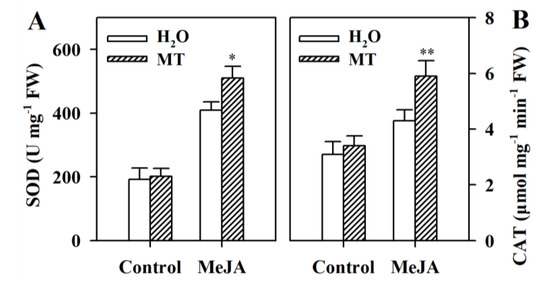 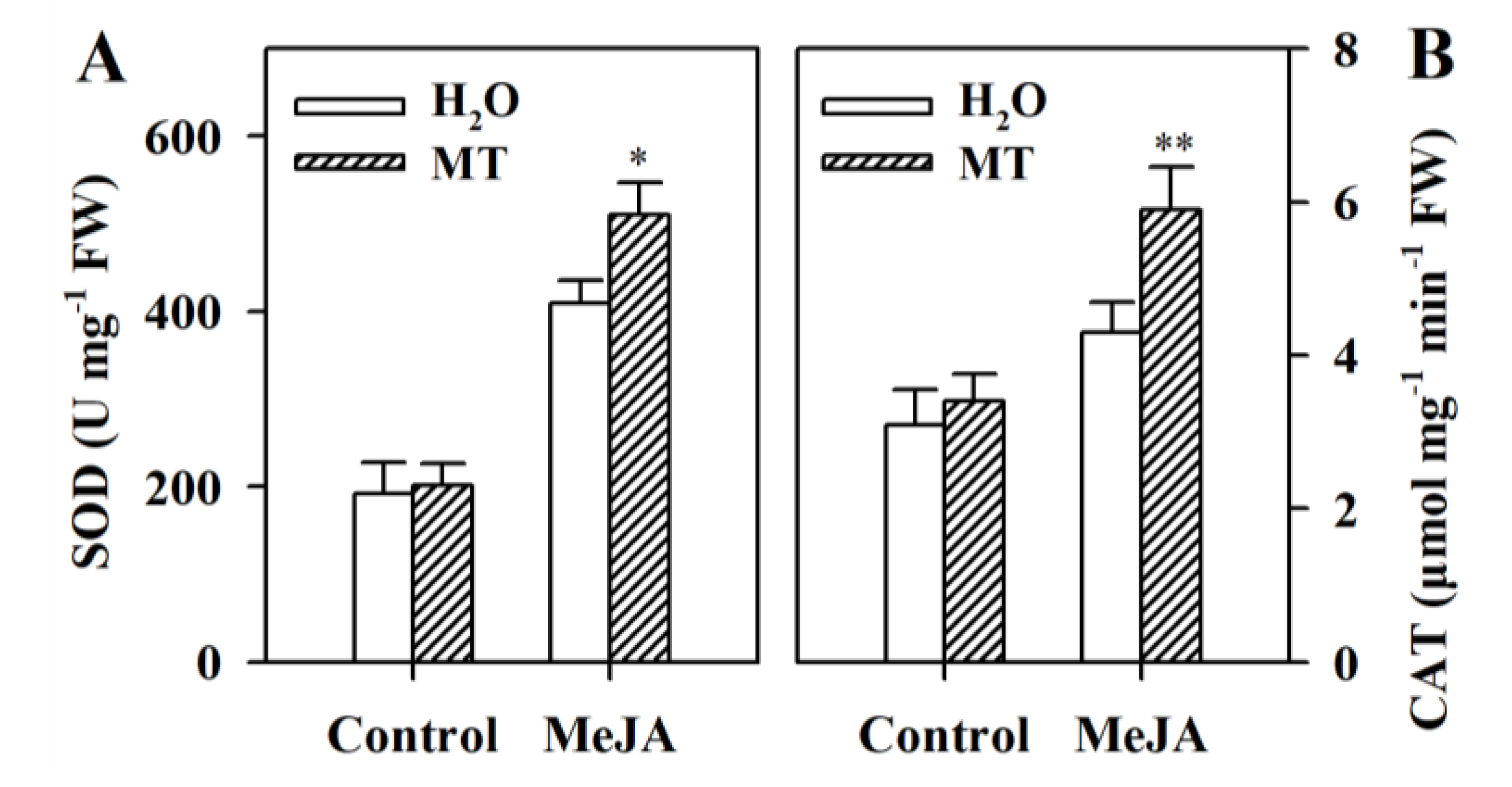 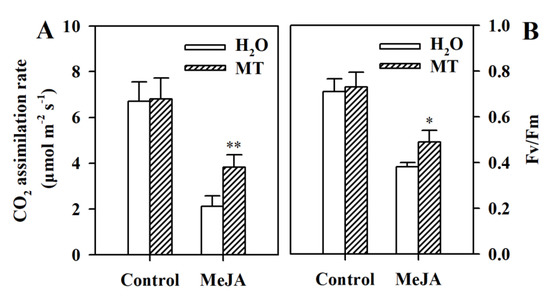 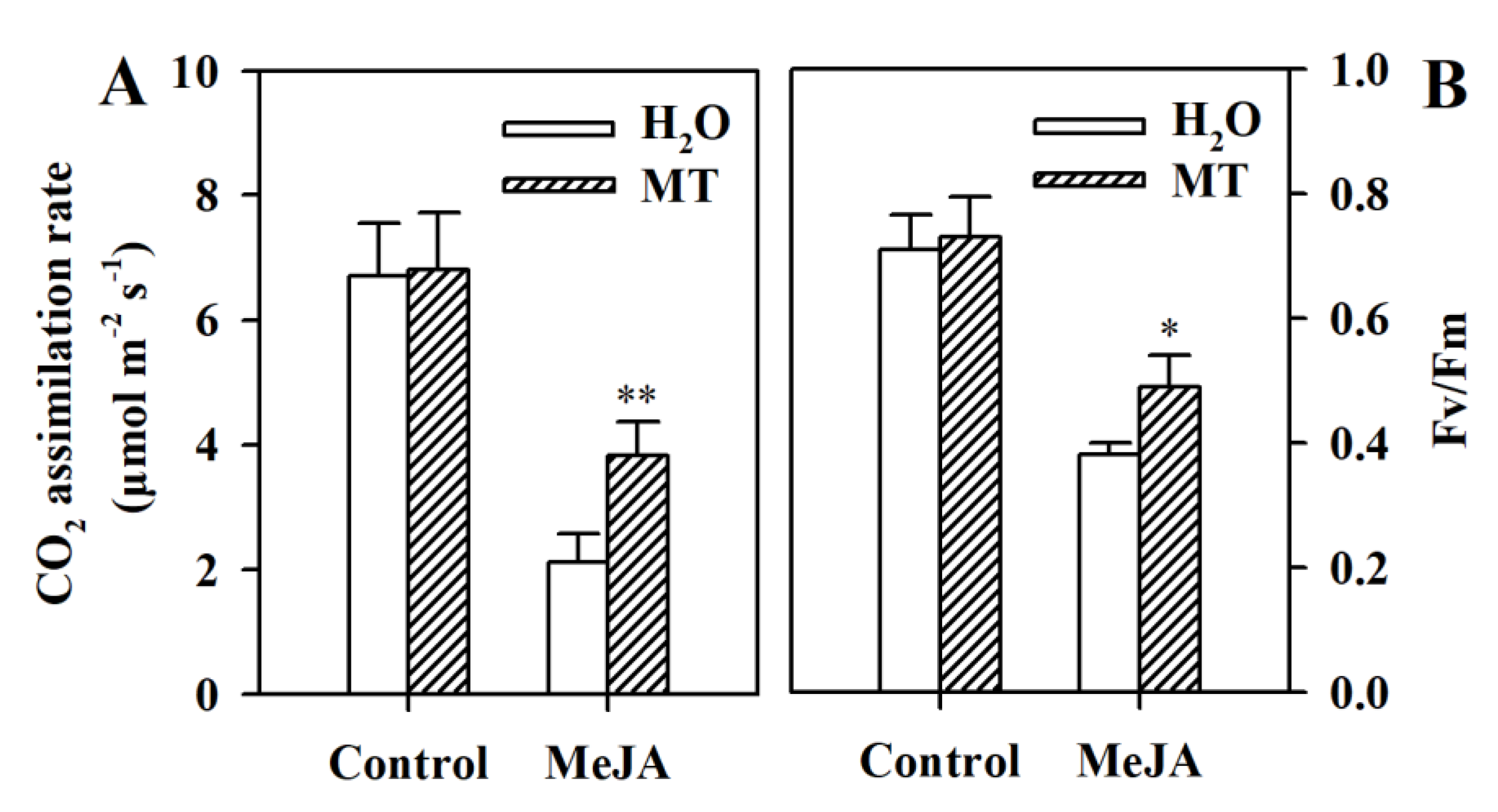 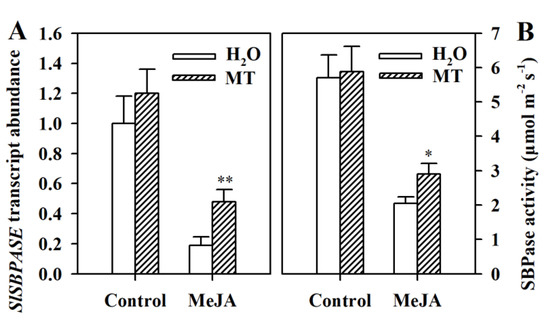 Table 1. Primers used in RT-PCR.
Table 1. Primers used in RT-PCR.
© 2019 by the authors. Licensee MDPI, Basel, Switzerland. This article is an open access article distributed under the terms and conditions of the Creative Commons Attribution (CC BY) license (http://creativecommons.org/licenses/by/4.0/).
We use cookies on our website to ensure you get the best experience. Read more about our cookies here.
Accept
We have just recently launched a new version of our website. Help us to further improve by taking part in this short 5 minute survey here. here.
Never show this again