Mulching-Induced Changes in Tuber Yield and Nitrogen Use Efficiency in Potato in China: A Meta-Analysis

Maintaining high double rice productivity in China is very important for ensuring the food security of China. However, the double rice production system is sensitive to changes in both climate and management practices. Previous studies showed that rice production has been negatively impacted by global warming without considering the changes of cultivars and management practices. However, cultivar improvements and the impact of cultivar change must not be ignored in any assessment. In the current study, we combined data analysis with crop modeling to investigate the impacts of changes in climate and cultivars on rice productivity at three different double rice sites (Nanchang, Hengyang, and Gaoyao) in China. The results showed a warming trend at the study sites during 1981–2009, and the temperature increase rates (maximum, average, and minimum temperatures) in the late rice growing season were larger than in the early rice growing season. Global warming has led to a reduction in the length of the rice growth period. Adopting new rice cultivars may partially mitigate the declining trend of the growing duration and grain yield, but it would not completely compensate for the negative impact observed in double rice regions. In general, the changes in cultivars prolonged the growing duration by increasing the basic vegetative phase and the photoperiod formation phase. The main reasons for yield improvement were the increase in the percentage of filled grains for early rice and the increase in grain number per spike for late rice. In the face of future warming, breeding efforts are necessary for producing new cultivars that are resilient to the negative impacts of future climate change on agriculture. View Full-Text
Keywords: early rice; late rice; cultivar change; warming climate; APSIM-Oryza early rice; late rice; cultivar change; warming climate; APSIM-Oryza
►▼ Show Figures 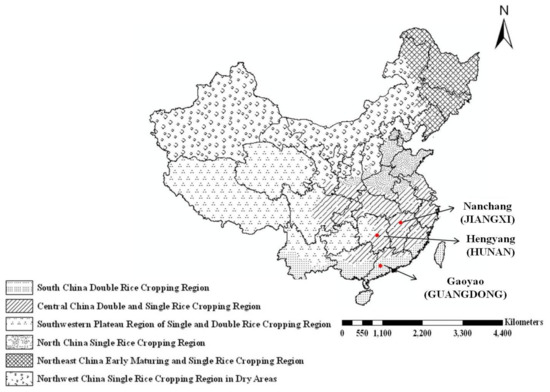