Role of Modelling in International Crop Research: Overview and Some Case Studies
Next Article in Special Issue

Development of high yielding and more palatable glutinous rice is an important goal in breeding and long-standing cultural interaction in Asia. In this study, the TGW6 and Wx, major genes conferring 1000 grain weight (GW) and amylose content (AC), were edited in a maintainer line by CRISPR/Cas9 technology. Four targets were assembled in pYLCRISPR/Cas9Pubi-H vector and T0 mutant plants were obtained through Agrobacterium mediated transformation with 90% mutation frequency having 28% homozygous mutations without off-target effects in three most likely sites of each target and expression level of target genes in mutant lines was significantly decreased (P < 0.01), the GW and gel consistency (GC) were increased, and the AC and gelatinization temperature (GT) were decreased significantly and grain appearance was opaque, while there was no change in starch content (SC) and other agronomic traits. Mutations were inheritable and some T1 plants were re-edited but T2 generation was completely stable. The pollen fertility status was randomly distributed, and the mutant maintainer lines were hybridized with Cytoplasmic Male Sterile (CMS) line 209A and after subsequent backcrossing the two glutinous CMS lines were obtained in BC2F1. The identified proteins from anthers of CMS and maintainer line were closely associated with transcription, metabolism, signal transduction, and protein biosynthesis. Putative mitochondrial NAD+-dependent malic enzyme was absent in CMS line which caused the pollen sterility because of insufficient energy, while upregulation of putative acetyl-CoA synthetase and Isoamylase in both lines might have strong relationship with CMS and amylose content. High yielding glutinous CMS lines will facilitate hybrid rice breeding and investigations of proteins linked to male sterility will provide the insights to complicated metabolic network in anther development. View Full-Text
Keywords: rice; CRISPR/Cas9; Wx; TGW6; mutations; maintainer; cytoplasmic male sterile; amylose content; anther; protein rice; CRISPR/Cas9; Wx; TGW6; mutations; maintainer; cytoplasmic male sterile; amylose content; anther; protein
►▼ Show Figures 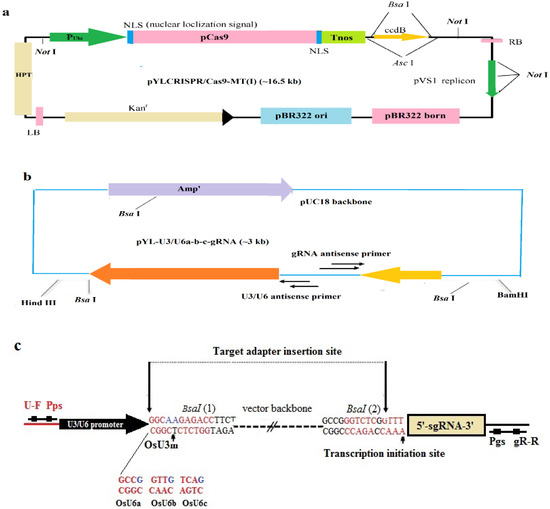