Potassium: A Vital Regulator of Plant Responses and Tolerance to Abiotic Stresses
Previous Article in Journal

Late blight disease, caused by Phytophthora infestans, is a major problem in potatoes worldwide [1]. Similarly, in Ethiopia, the damaging impact of P. infestans is increasingly becoming a serious problem in potato production and the disease is threat to food security. In Ethiopia, potato yield loss caused by P. infestans ranges between 29–100%, depending on variety used [2].
Different sources of inoculum can be responsible for the outbreak of P. infestans. Latently infected seed tubers, infected tubers (cull piles and volunteer potatoes), and closely related weed hosts are a primary source of inoculum. Late blight disease can be airborne [3], soil-borne, and seed-borne [4], and latently infected seed tubers are the most important source of primary inoculums leading to epidemic disease development. In Ethiopia, potato seed tubers are commonly produced through field multiplication of vegetatively produced seed tubers. However, field multiplication of vegetatively propagated seeds tubers leads to high late blight pressure and the production of poor-quality seed tubers [5].
A number of studies have investigated various methods to control late blight disease [6,7] including the genetic basis of resistance in host plants [8] and the application of chemicals. Indeed, the problem of P. infestans is further complicated with the breakdown of resistance in promising cultivars [9], and chemical control could negatively impact the soil environment and public health [10], and has resulted fungicide resistance development. Therefore, practically applicable mechanisms and sustainable methods that control late blight disease to an economically safe level are critically important for the future.
Optimizing the nutritional status of a crop with calcium nutrients could be a feasible way to decrease different diseases to an economically safe level [11]. For instance, calcium nutrients suppressing the severity of Erwinia carotovora subsp. atroseptica of potato [12] and sweet cherries [13], stem rot of soybean [14], brown rot of peach [15], early blight of potato [16], and late blight of potato and tomato [16,17] has been reported. Similarly, Subhani et al. [18] stated that higher calcium content in potato foliage resulted in more resistance of the plant against infection with late blight. Furthermore, the application of calcium can also reduce the input of fungicides [19], decrease potato tuber internal defects, and increase yield, storage life, tuber weight, tuber size and quality [20,21]. So far, in Ethiopia, the application of calcium nutrients in potato production is not recognized and information about calcium application rate is lacking. In potato production, calcium nutrients can be applied in the form of calcium chloride [16] or calcium nitrate [21]. This study was designed to determine the effect of calcium chloride, calcium nitrate, and the combination of calcium chloride mixed with calcium nitrate (1:1) on the severity of late blight disease and potato tuber yield, and to assess the extent to which the application of calcium nutrients reduces the severity of late blight disease and improves potato tuber yield. Hence, the output of this study can be used to amend calcium nutrients in potato nutrition, specifically in Ethiopia, where the use of calcium nutrients is less recognized.

Pot experiments were conducted at Arsi University, Assela, Ethiopia. The study was carried out from June to October 2016, under natural occurrences of late blight disease.

Seed tubers of two potato varieties (Gera and Shenkola) were obtained from Adet Agricultural Research Center, West Gojam, Ethiopia, and used as plant material. Seed tubers were selected for uniformity of tuber size and number of buds per tuber. A single seed tuber (40–45 g) was planted at the center of each pot in the experimental unit.

A mixture of arable soil, sand, and compost (2:1:1 ratio by volume) was used as a growth substrate. The growth substrate was mixed efficiently and then filled into bottom-sealed, 10-liters pots to a total weight of 8 kg per pot. At the beginning of the experiment, the pots were watered with 2 liters of water until saturation. Later on, the water supply was carried out together with Ca nutrients. There was no application of fungicides, and all agronomic practices and cultural managements were kept uniform.

The study was conducted in a randomized complete block design (RCBD) with four replications. The treatments consisted of a combination of two potato varieties and three types of calcium nutrients: CaCl2 alone, CaNO3 alone, and CaCl2 mixed with CaNO3 (1:1), each at three levels (5, 10, and 15 g per liter per plant) and the control treatment (0 g of Ca nutrients). Totally, 20 treatments and 80 experimental units were included in the study. Calcium nutrients were applied through foliar application starting at one month after planting with 10-days intervals, until the plants were two months old. The control plants were sprayed with tap water alone.

Severity of late blight disease was assessed with one week interval, starting at two months after planting until three months old. Disease severity was assessed by estimating leaf area infected and damaged by the disease. For the accurate estimation of the damaged leaf area, the diseased leaf was photographed as soon as the first necrotic damage was observed. Total areas of green color and chlorotic lesion area were measured with an estimation method for disease severity using RGB imagery [22] from Image J, a Java-based image processing tool (https://imagej.nih.gov/ij/). The damaged leaf area from Image J analyses was then used to evaluate the severity of late blight.
Hence, the percentage of infected leaf area for calcium-treated plants and control plants (grown without calcium application) was calculated based on the results obtained from Image J, a Java-based image processing tool. In this regard, late blight disease severity was determined according to Andrivon et al. [23] using a 1–10 scoring scale where: 1 = No lesions, 2 = a few circles, 3 = up to 5%, 4 = 5.1–10%, 5 = 10.1–25%, 6 = 25.1–50%, 7 = 50.1–75%, 8 = 75.1–85%, 9 = 85.1–95% and 10 = 95.1–100% leaf area covered with late blight symptom. The percentage of disease severity reduction was calculated as: 100 (1 − ×/y), where x and y are the disease severity index for pre-harvest calcium-treated and control plants, respectively.

Total tuber yield was measured through destructive measurements, at 90 days after sowing. Tubers were harvested by washing the root system under running water. Total harvested yield (g) was measured and followed by the sorting of the diseased and poor-quality tubers. Healthy tubers with no defects were considered as marketable yield (g). Changes in yield due to the application of calcium nutrients were calculated from differences between the treatments.

2.4.3. Plant Height, Number of Branches, and Number of Tubers

At three months after planting, plant height was measured from the main stem. The measurement was carried out using a ruler (cm), starting from the soil surface (basal end of stem) to the top of the plant (shoot apex). The number of branches was counted at the same day of measuring plant height. The number of tubers was counted after harvesting stems and collecting tubers.

2.4.4. Tuber Tissue Analysis for the Determination of Calcium Content

The determination of calcium in the tuber tissue was carried out for each treatment within each replication. Tuber sample was randomly obtained; the sample was then oven-dried at 80 °C for 72 h and grinded into powder form. The powdered sample for each treatment (0.5 g) was dissolved in 20 mL of nitric acid. Deionized water (150 mL) was added to the dissolved sample and the solution was analyzed for the determination of calcium content through atomic absorption on a spectrophotometer using methodology described by Hamdi et al. [21].

Statistical evaluations of the results were carried out using Genstat, 15th edition. The effect of calcium nutrients was considered as significant if p < 0.05. Significant mean comparison was conducted using the Duncan test (α = 0.05). Simple linear regression analysis (α = 0.05) was performed to determine the relationship between tuber calcium content and late blight disease severity index, as well as between tuber calcium content and tuber yield.

4.2. Plant Height, Number of Branches, and Number of Tubers 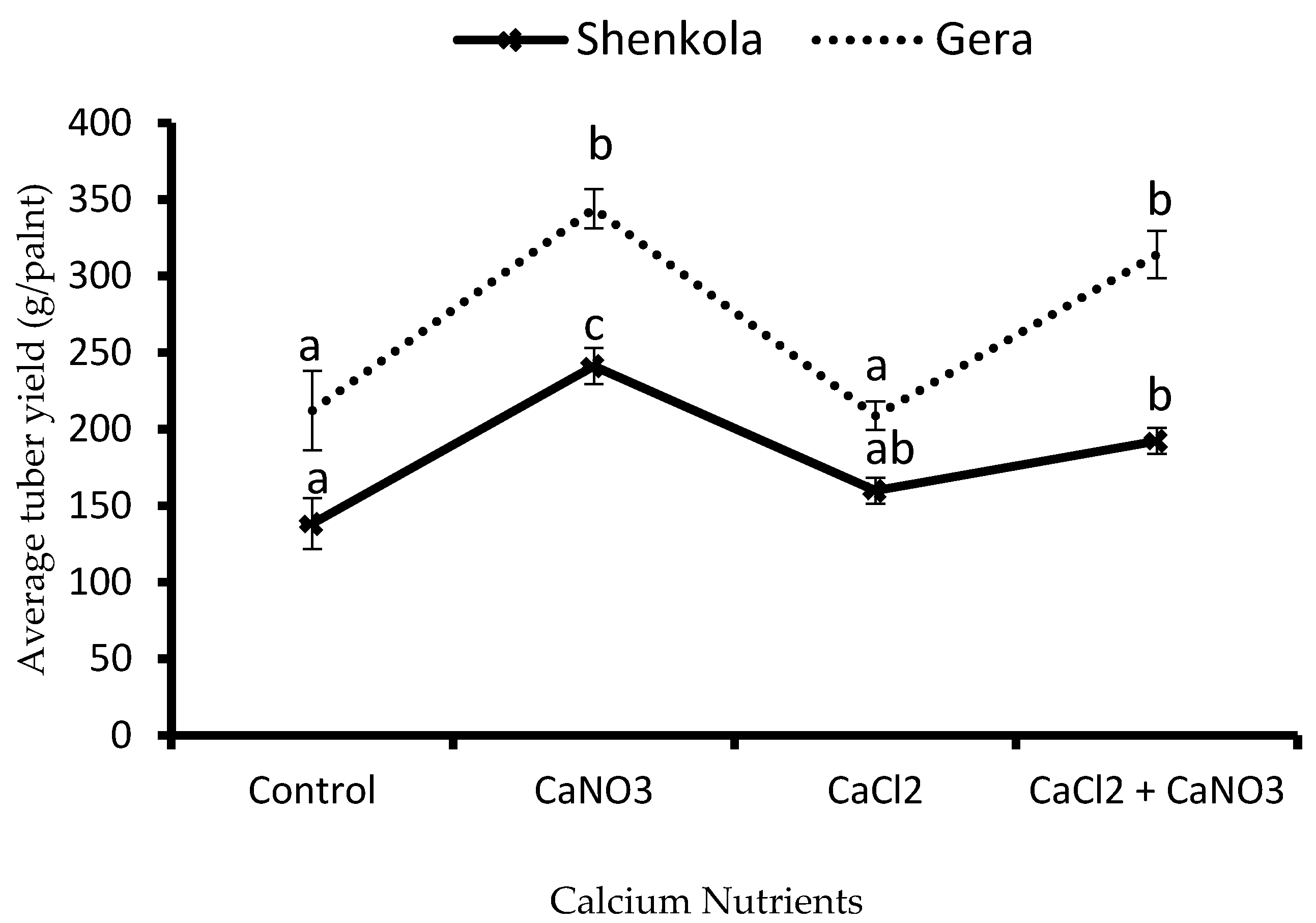