What Affects the Corporate Performance of Listed Companies in China’s Agriculture and Forestry Industry?
Previous Article in Journal

:
The destructive soilborne Fusarium species is one of the most serious challenges facing agriculture. Mycotoxins produced by Fusarium spp. can induce both acute and chronic toxic effects on humans and animals. Massive investments have been made in the last few decades to develop an appropriate management strategy to control Fusarium species in cereals, particularly in wheat, using genetic resistance and other practices, with varied outcomes. The purpose of this research was to find new sources of resistance to both Fusarium culmorum and F. pseudograminearum, which are wheat’s most destructive pathogens in seedlings and adult plants stages. In this study, 26 lines were selected and promoted from a total of 200 spring wheat germplasm received from CIMMYT Mexico plus 6 local check lines. The 32 lines were screened for their resistance reactions to both Fusarium species under different environmental conditions. The discriminant factorial analysis indicated that 7, 12, and 5 were resistant lines against F. culmorum under field, greenhouse, and growth room conditions, respectively. Four lines, L12, L19, L21, and L26, were found to be jointly resistant at the adult and seedling stages in the field and greenhouse. On the other hand, only moderately resistant lines were found for F. pseudograminearum but not completely resistant, which was limited to growth room conditions. Interestingly, five lines (L10, L13, L17, L25, and L28) have shown resistant properties to both Fusarium species. To further evaluate the yield performance of the best-selected 26 lines plus 6 check lines, field trials were conducted under ± F. culmorum inoculum. The highest yield values were obtained from three check lines, as well as the L26, which showed consistency in its reaction to F. culmorum under both field and greenhouse conditions, and produced a high yield (5342 kg/ha). Based on the result obtained, L26 showed a high potential to improve wheat yield and resistance to F. culmorum-caused root and crown rot; therefore, it should be used in wheat crossing programs. Having Fusarium-resistant varieties will ultimately reduce crown rot symptoms and increase grain quality by reducing mycotoxin levels.
Keywords:
Fusarium crown and root rot; Triticum; resistance screening

Out of 200 spring wheat germplasm obtained from CIMMYT Mexico, a set of 26 lines with good quality characteristics were chosen based on their resistance performance to be further validated for their resistance potential to F. culmorum (isolate FC14) and F. pseudograminearum (isolate FPG03). Three standard moderate resistant check lines: 249, Altay, and Yelken, as well as three susceptible check lines, Kızıltan, Gerek, and Kutluk, were included as controls due to their known reactions (Table 1). This set of 26 lines plus 6 checks (total 32), was tested for F. culmorum resistance in three different field conditions in Eskişehir, Yozgat, and Konya, as well as in Eskişehir’s greenhouse and growth room facilities. The meteorological conditions for each region are displayed according to the Turkish State Meteorological Service (TSMS) in Table 1. To screen for F. pseudograminearum resistance, only growth room facilities were used. Furthermore, the same set was tested for yield performance in Konya under plus/minus F. culmorum in field conditions (Table 2).

Monosporic isolates of F. culmorum and F. pseudograminearum were plated on the Spezieller Nährstoffarmer Agar (SNA) medium (1 g KH2PO4, 1 g KNO3, 0.5 g MgSO4 × 7H2O, 0.5 g KCl, 0.2 dextrose, 0.2 sucrose, 20 g agar, distilled water to 1 L) and cultured for 10 days at 23 °C ± 1 °C with a 12 h photoperiod. Oven bags (35 cm × 48 cm), quarter filled with wheat bran, were humidified and sealed with cotton. Separate wheat brans were allocated for each inoculum. The bags were autoclaved at 121 °C for 20 min for 3 successive days. The spore suspension was prepared by adding sterilized distilled water to each Petri dish containing Fusarium cultures. Autoclaved wheat bran bags were allowed to cool before being inoculated with the spore suspension under sterilized conditions. Inoculated wheat bran was mixed by shaking the bags and incubated at 23 °C ± 1 °C for 2–3 weeks at a 12 h photoperiod or until the fungus sufficiently colonized the bran. Finally, the fungus-infested wheat bran was allowed to dry at room temperature. The fungus-colonized bran was used as a source of inoculum in experiments conducted in the growth room, greenhouse, and field.

Infested wheat bran was suspended in distilled water before being filtered through two layers of cheesecloth. Before use, the spore concentration was adjusted to 106 conidia mL−1 of water, and methylcellulose (0.1% v/v) was added to the conidial suspension. To achieve sufficient plantlets with a similar phenological stage, ten wheat seeds were placed on moist blotting paper in sterilized Petri dishes for germination at 22 °C for 2–3 days. Each pre-germinated seed was sown in a separate plastic tube (2.5 cm in diameter × 16 cm in height) filled with potting mix and covered in the same substrate. A sterile potting mix of sand, soil, and organic manure (50:40:10; v/v/v) was used for growth room and greenhouse trials. One week after sowing, the stem base of each seedling (0.5–1 cm above the soil level, including the coleoptile) was inoculated with 1 mL (1 × 106 conidia mL−1) of the abovementioned spore suspension. Following incubation, the seedlings were kept in a growth room for 42 days (early tillering, Zadoks growth stage 14), with a day/night photoperiod of 16/18 h at a temperature of 23 °C ± 1 °C and relative humidity of 60/80% (±5%). A randomized complete block design with five replications (1 plant per replicate) was used, and the experiment was repeated twice.

Each tube was sown with two seeds of each wheat accession, and received 0.5 g of fungal colonized wheat bran (as inoculum source). To facilitate root growth, these tubes were set on a platform of sand in a greenhouse characterized by a range of temperatures from 16 °C to 35 °C with relative humidity (RH) of 25–90%. During the growing seasons, the experiments were watered as needed. Plants were exposed to water stress at maturity stages to promote disease development. A randomized complete block design was used to set up the experiment, which had six replications (two plants per replicate).

During the 2017/18 growing season (October to June), plant materials and check cultivars were planted in field conditions at the ILCI Çiçekdağı Agricultural Enterprise (ICAE) in Yozgat (Latitude 39.63806; Longitude 34.46722), at the Transitional Zone Agricultural Research Institute (TZARI) in Eskişehir (Latitude 39.76670; Longitude 30.40518), and the Bahri Dağdaş International Agricultural Research Institute (BDIARI) in Konya (Latitude 37.85789; Longitude 32.556), Turkey. Each 5 g seed sample of entries was sown in a one-meter row and inoculated with 2 g of fungus-colonized wheat bran of F. culmorum. Experiments with three replications were set up using a randomized complete block design. Disease symptoms were scored by picking up 15 individual plants from each row.

Plants were harvested, and stems were collected at the end of the growing season. Seedling resistance was tested on plants that were grown in a growth room (Zadoks growth stage 14). At the end of the maturity stage, plants grown in greenhouses and fields were examined, and adult plant resistance was tested. Plants were scored on a numeric scale of 1–5 for the typical symptoms of browning percentage on the crown (by observing the disease on the crown) and the main stem (by measuring the disease symptoms on the stem). The scale was modified from Wildermuth et al. [40] (1: 1–9% as resistant, 2: 10–29% moderately resistant, 3: 30–69% moderately susceptible, 4: 70–89% susceptible, and 5: 90–99% highly susceptible). Plants grown under field conditions were also scored for whitehead symptoms at the ripening stage using the same 1–5 scale.

The selected spring wheat germplasm was evaluated for yield performance under field conditions in Konya, both with and without F. culmorum inoculation. Each entry was replicated three times and planted in a 6 m2 plot of six rows in a randomized complete block design with plus or minus artificial inoculum. For inoculated plots, a 140 g seed sample from each entry was inoculated with 5 g of fungus-colonized wheat bran, as described in the ‘Field conditions’ section. Grain yield was weighted and recorded in kg per ha per plot for all plots.

The analysis of variance was used to analyze all of the data (ANOVA). Protected least significant difference at p < 0.001 was used to detect significant differences between studied lines using SPSS statistical software V 17.0 (SPSS Inc., Chicago, IL, USA). A linear discriminant analysis (AFD) was performed using R 3.4.3 software to distinguish the mainline groups based on their disease index. Linear regression analyses were also performed to uncover relationships between each line’s plant height and grain weight. All other analyses were carried out with the XLSTAT software (2016.02.28451) (Addinsoft Inc, New York, NY, USA).

This research was funded by CRP Wheat-CIMMYT and GRDC.

The author would like to thank the SBP CIMMYT Turkey program for its great efforts to produce such outcomes. Also, the author would like to thank Salah-Eddine Laasli for analyzing the data. Göksel Özer and Mustafa Imren are thanked for their contribution to reviewing the manuscript. Gul Erginbas-Orakci is thanked for her support in screening the germplasm. Special thanks to the spring bread wheat program at CIMMYT Mexico led by Ravi Singh. Abdelfattah A Dababat is thanked for his great support in conducting the field trials and the manuscript preparation and editing. 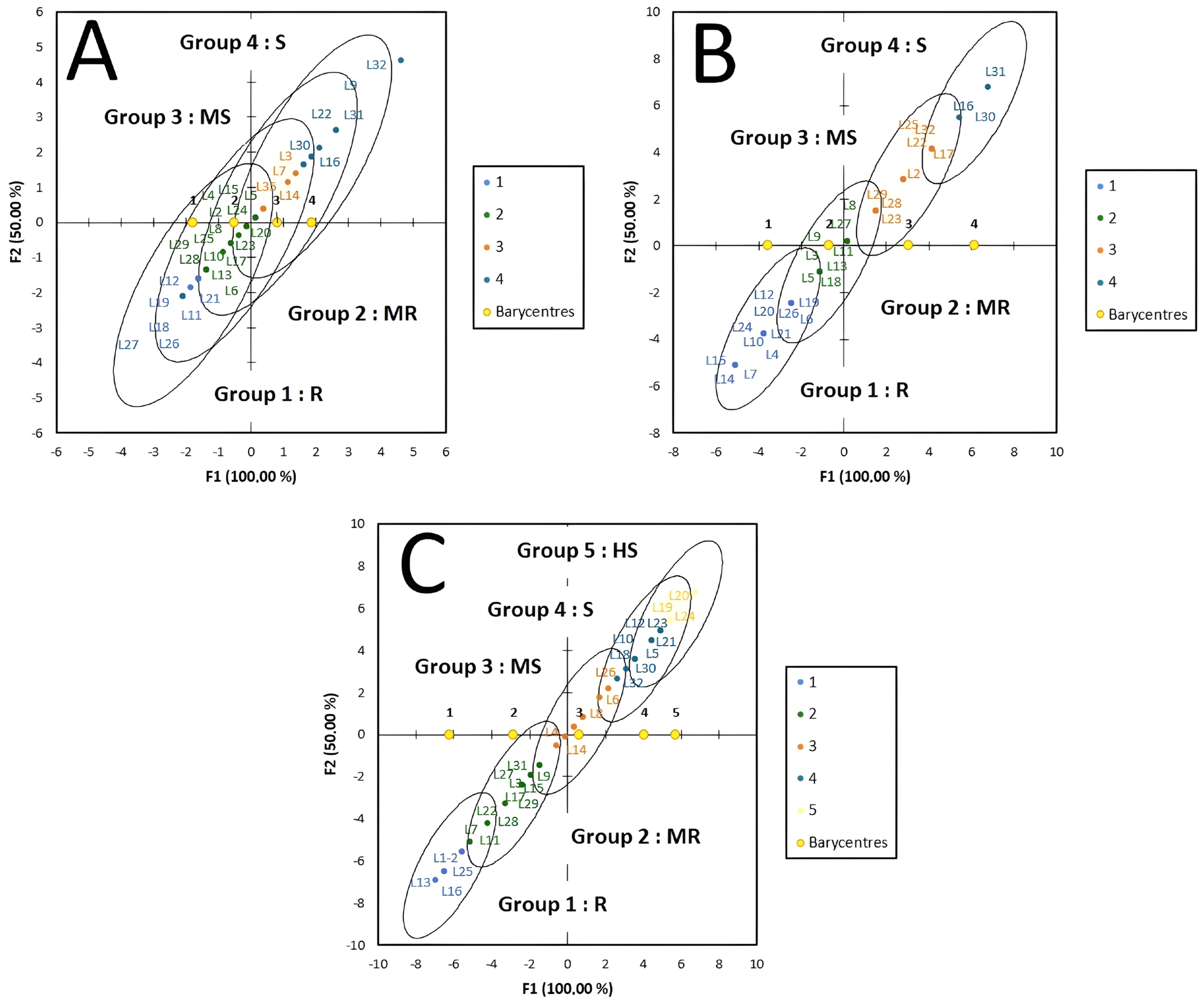 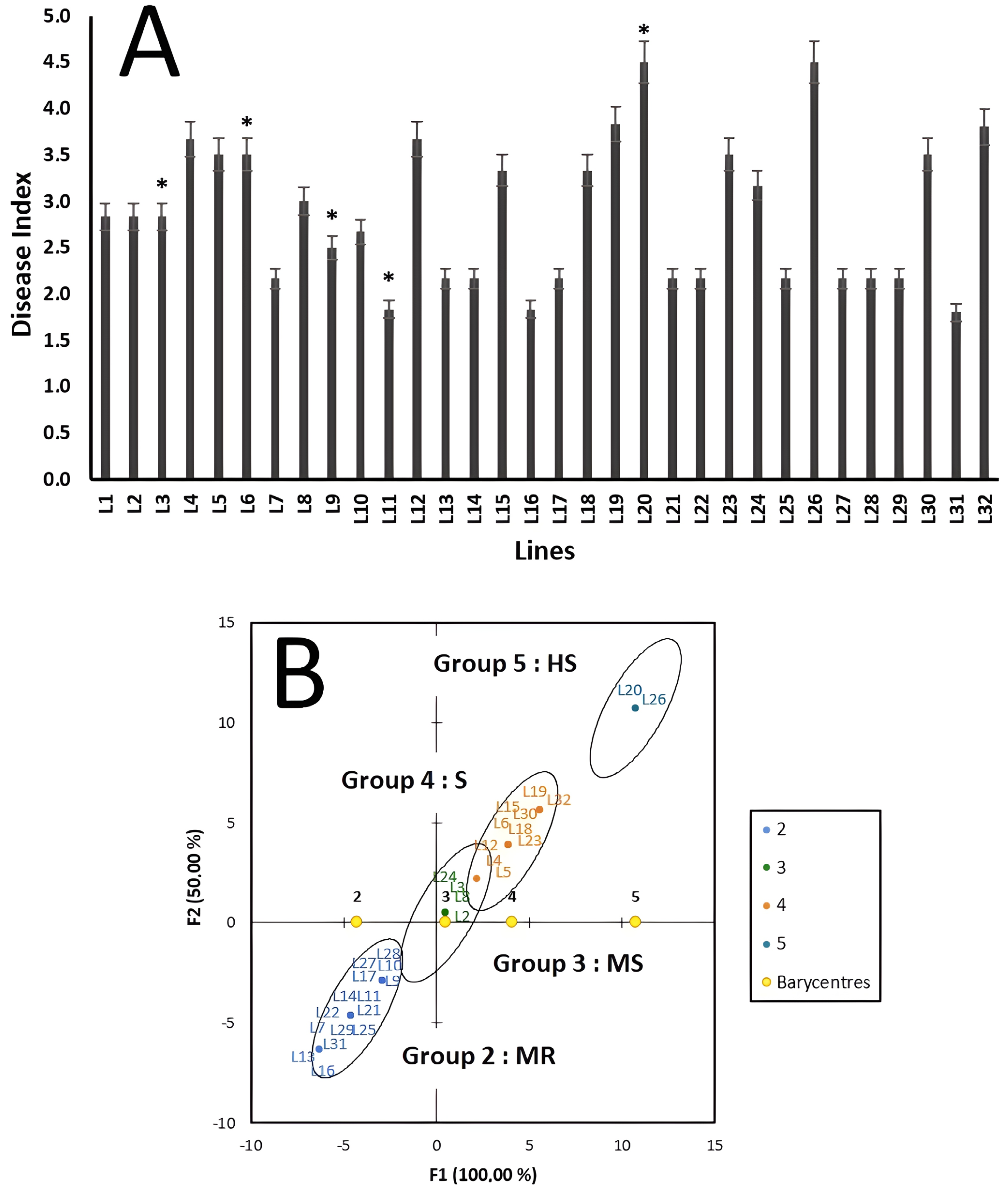 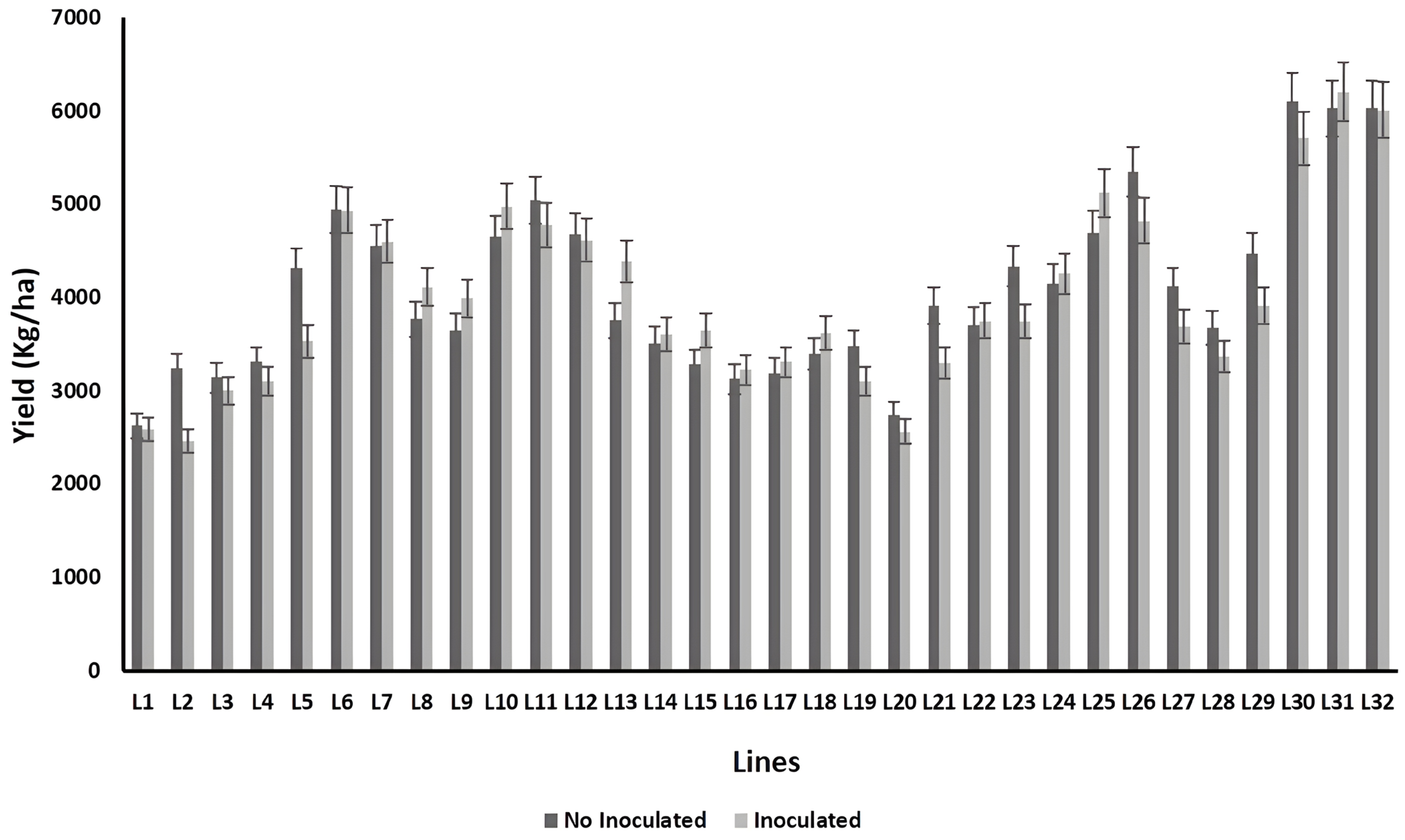