An increased awareness of environmental protection and sustainable production raise the necessity of incorporating the selection of low nitrogen-tolerant winter wheat cultivars for high yield and quality in the breeding process. This selection can be assisted by using stress screening indices. Our study aimed to evaluate and compare a number of stress screening indices and to determine and select the most nitrogen deficiency-tolerant winter wheat cultivars for further breeding. The experiment included forty-eight winter wheat cultivars from eight different countries that were grown for two consecutive years at three different locations under low-nitrogen (LN) and high-nitrogen (HN) conditions. The results emphasized the importance of applying the appropriate stress screening indices in evaluating and selecting nitrogen deficiency-tolerant wheat cultivars. The promising stress screening indices were the mean productivity index (MP), geometric mean productivity index (GMP), harmonic mean index (HM), stress tolerance index (STI) and yield index (YI). They identified cultivars Sofru, BC Opsesija and MV-Nemere as the most tolerant cultivars to LN conditions for grain yield. The same indices classified U-1, OS-Olimpija, Forcali, Viktoria and BC Tena cultivars as the most tolerant to LN conditions for the grain protein content. Using the tolerance index (TOL), yield stability index (YSI) and relative stress index (RSI), the Katarina and Ficko cultivars were denoted as LN-tolerant cultivars in terms of the grain yield and Isengrain, Tosunbey, Vulkan and BC Darija in terms of the grain protein content.
Keywords: wheat; abiotic stress; nitrogen; tolerance indices; yield; quality wheat; abiotic stress; nitrogen; tolerance indices; yield; quality

Nitrogen, as one of the essential nutrients for plant growth, development and productivity, is a substantial requirement for efficient and profitable crop production. Its deficiency may lead to changes in the gene expression, plant metabolism, growth rates and, finally, crop yield and quality reduction [1,2]. In order to avoid crop failure, N fertilizers are usually applied in large quantities. However, the excessive application of N fertilizers beyond nitrogen plant requirements has adversely affected the environment, and it has become obvious that, due to a number of various damaging effects on the environment and economic costs, the high-nitrogen fertilizer consumption has to be optimized [3].
An increased awareness of environmental protection and sustainable production raises the necessity to incorporate a selection of low-nitrogen-tolerant winter wheat cultivars for high yield and quality in the breeding process. Consequently, breeding for high-nitrogen use efficiency (NUE) has become of great importance. The most commonly used concept of breeding for NUE is to select superior germplasms for the grain yield per se by exploiting the existing genetic variations under environmental stress conditions [4]. This selection can be assisted by using stress screening indices.
A number of stress screening indices described by different mathematical expressions with two to four variables have been used for identifying tolerant cultivars under stress and stress-free environments [5]. For instance, the tolerance index (TOL) was defined as the difference between trait performances without and under stress conditions [6]. Rosielle and Hamblin [6] also proposed the mean productivity index (MP) as the average trait performance of a cultivar under stress and nonstress conditions. Fernandez [7] introduced the stress tolerance index (STI) and geometric mean productivity index (GMP), where STI was the ratio of the products’ yield performance under stress and nonstress conditions and squared mean yield performance under nonstress conditions, and GMP was the square root of the product of the cultivar performance under stress and nonstress conditions. The stress susceptibility index (SSI) was used for the evaluation of trait stability and for the determination of changes in traits under different environments by utilizing the yield performance of each cultivar and mean yield performance under both conditions [8]. The relative stress index (RSI) was introduced by Fisher and Wood [9] in research on drought stress on spring wheat cultivars. The harmonic mean (HM) is another index that relies on trait performances. It was used in research on wheat–rye disomic addition lines and calculated as the ratio of a doubled product of cultivar yield under stress and nonstress conditions and their sum [10]. The yield stability index (YSI) was defined as the ratio between the yield performance under and without stress [11], while the yield index (YI) was defined as the ratio between the trait performance of certain cultivar and mean performance of all the cultivars under stress conditions [12]. Nevertheless, simple criteria for the determination of tolerant and stabile cultivars are high values for the MP, STI, GMP, RSI, HM, YSI and YI, as well as low values for the TOL and SSI [13].
A number of research papers on wheat were focused on the evaluation of low-nitrogen stress on the yield [14,15]. Additionally, there have been studies on rice [16] and rapeseed [17] that evaluated low-nitrogen stress effects using stress screening indices. Our study focused on an analysis of nitrogen fertilization stress on grain yield and the grain protein content in winter wheat using stress screening indices. The specific objectives were: (1) to evaluate, compare and identify the most promising stress screening indices for the evaluation of cultivar nitrogen deficiency tolerance in wheat for grain yield and grain protein; (2) to evaluate the correlation between the stress screening indices and performance of the grain yield and grain protein content under high and low amounts of nitrogen and (3) to identify and select the most nitrogen deficiency-tolerant winter wheat cultivars for further breeding purposes.

The experimental material included forty-eight winter wheat cultivars released from 1936 to 2016, mostly by Croatian—HR breeding institutes (33 cultivars) and the rest by breeding programs from seven other countries (Austria—AU, France—FR, Hungary—HU, Italy—IT, Romania—RO, Russia—RUS and Turkey—TR).
Cultivars were evaluated in field trials under two N fertilization levels during two consecutive growth seasons (2016/17 and 2017/18) at Osijek (45°33′ N, 18°40′ E), Zagreb (45°48′ N, 15°58′ E) and Poreč (45°13′ N, 13°35′ E). These locations represent different climatic conditions and soil types in Croatia. In general, Osijek and Zagreb have continental climates, dry with an Eutric Cambisol soil type and humid with a carbonate alluvium soil type, respectively. Poreč has a Mediterranean climate and red soil.
The experiment was set up as a split-plot factorial design in three replications with two N fertilization levels as the main plots and 48 wheat cultivars as the subplots. The plot sizes were 7.56 m2 at Osijek and Poreč and 4.95 m2 at Zagreb. The sowing rate was 350 viable kernels m−2 in all trials and for all cultivars. In order to avoid edge effects on the experimental plots, buffer plots were sown at the beginning and at the end of the main N treatment plots. Basic and pre-sowing fertilizations of 74-kg N ha−1, 80-kg P2O5 ha−1 and 120-kg K2O ha−1 were applied by adding 100 kg ha−1 of urea (46% N) and 400 kg ha−1 of NPK (7:20:30) in order to achieve the experimental conditions as similar as possible to those conditions in wheat production in the region where nitrogen is applied before planting. The N treatment comprised two N fertilization levels, 0-kg N ha−1 (low N, LN) and 100-kg N ha−1 (high N, HN), in a form of calcium ammonium nitrate (27% N). HN-level plots were top-dressed by 50-kg N ha−1 in tillering (GS23-25 after [18]) and by 50-kg N ha−1 during the stem extension (GS33-35 [18]) growth stages.
Herbicides, insecticides and fungicides to control major weeds, insects and foliar diseases were applied in accordance with the commercial practices of wheat production in the Southeastern European region. All trials were harvested at harvest maturity (GS92 [18]) by plot combines and weighed. Grain yield values were recalculated to a 0% moisture content and kg ha−1. Grain protein content (%) was measured using an Infratec 1241 Grain Analyzer (Foss, Denmark) from the grain samples of 0.5 kg collected after the harvest across all experimental plots.

Combined analysis of variance (ANOVA), best linear unbiased prediction (BLUP) for grain yield and grain protein content, principal component analysis (PCA) and 3D visualization of the results were performed by R software [19]. ANOVA was performed using linear model (aov function) with fixed effects for the year, location and cultivar effects, including their interactions. The screening indices were computed, and Pearson’s correlation coefficients, as well as Spearman’s rank order, were estimated using iPASTIC [13], which describes the stress indices as follows:
The tolerance index (TOL): where Yp is the yield of the cultivar under HN conditions (e.g., yield under normal conditions to achieve the full potential), and Ys is the yield of the cultivar under LN conditions (e.g., yield under stress conditions);
The stress susceptibility index (SSI): where (SI is the stress intensity, and Yms and Ymp are the yield means of all cultivars under stress and without it, respectively);
The yield stability index (YSI): the yield index (YI): the mean productivity index (MP): the geometric mean productivity index (GMP): the stress tolerance index (STI): the harmonic mean index (HM): the relative stress index (RSI):

In this study 48 winter wheat cultivars were evaluated under high-nitrogen (HN) and low-nitrogen (LN) conditions. We determined Sofru, BC Opsesija and MV-Nemere as the most tolerant cultivars for the grain yield in low-nitrogen conditions based on five selection indices (the MP, GMP, HM, STI and YI) and potentially useful as parental donors. For the same indices, in terms of the grain protein content, cultivars U-1, OS-Olimpija, Forcali, Viktoria and BC Tena were selected as the most tolerant under low-nitrogen conditions. In consideration of three other indices (the TOL, YSI and RSI), cultivars Katarina and Ficko were denoted as LN-tolerant cultivars in terms of the grain yield and cultivars Isengrain, Tosunbey, Vulkan and BC Darija in terms of the grain protein content. Our results showed that the MP, GMP, HM, STI and YI could be used in the identification of cultivars that give high yields and high-quality grain in conditions with and without a sufficient amount of nitrogen. The TOL, YSI and RSI showed weak or no correlations with the yield and grain protein content performance under stress and optimal conditions. Cultivar evaluation based on stress tolerance indices can be useful for wheat breeders, as they can track cultivar performances under stress conditions. Additionally, tolerant cultivars could be used for developing new high-yielding cultivars in stress conditions. 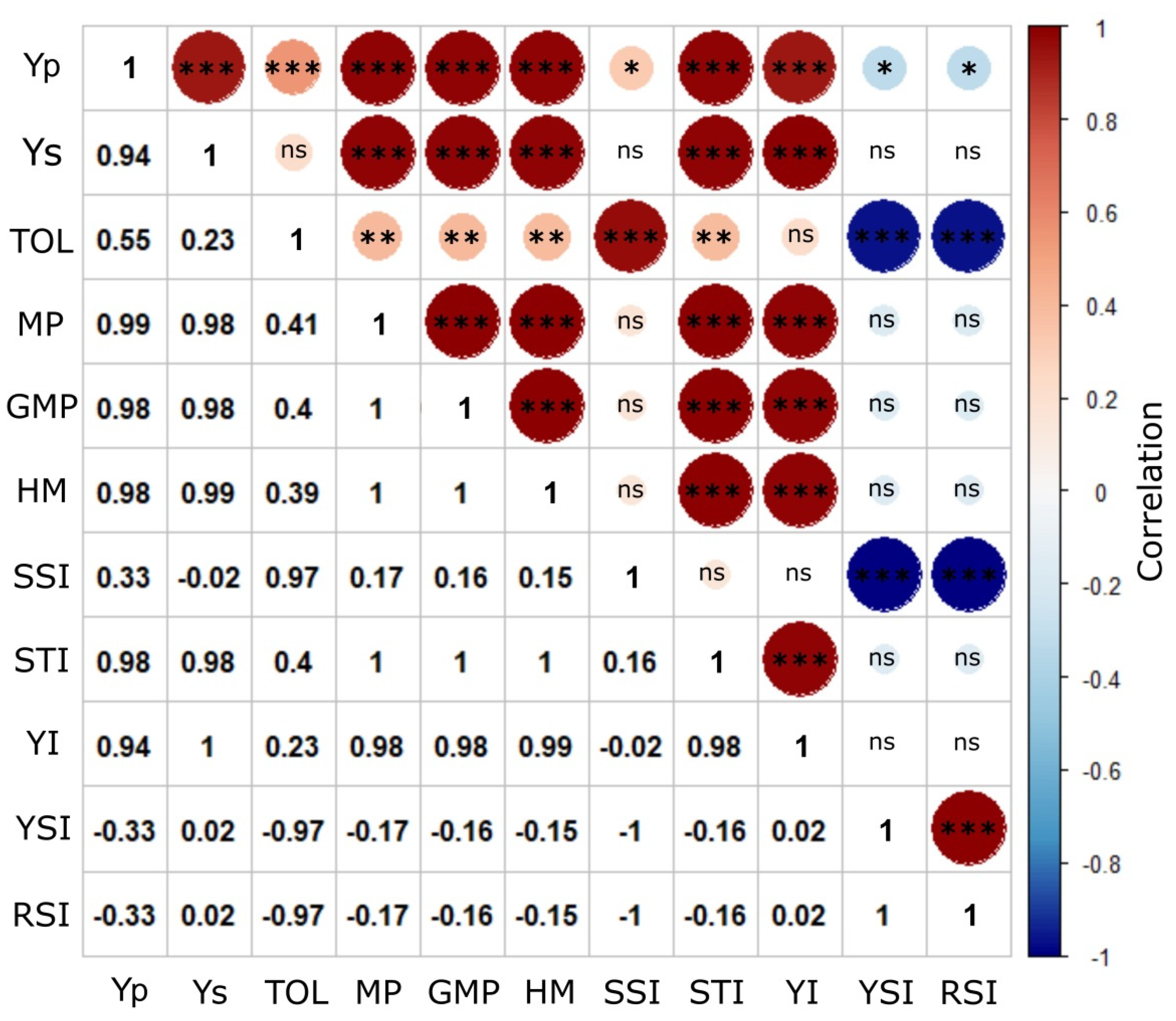 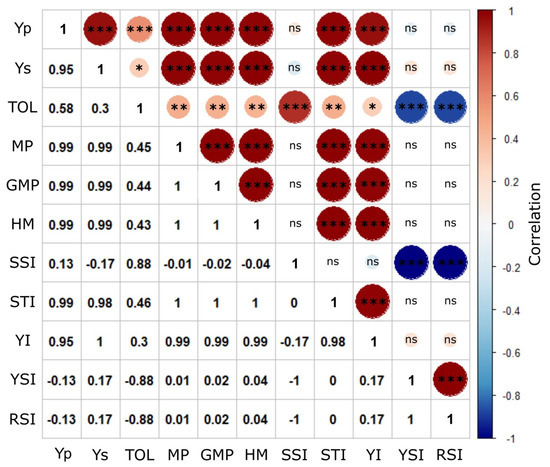 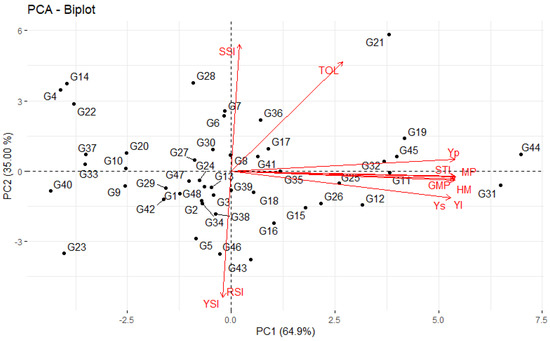