Strawberry (Fragaria ×ananassa Duch.) yields in winter production regions are greatly affected by early-season nitrogen (N) fertilization, especially when pre-plant N is not applied. In Florida, United States, applying N at high rates during the early season is a common fertilization practice, but little is known about its impact on fruit quality. The objective of this study was to examine season and early-season N fertilization effects on yield and physicochemical attributes of ‘Florida Radiance’ strawberry grown under subtropical climate conditions. Field experiments were conducted in west-central Florida over two growing seasons. Plants were treated with three N rates (1.12, 1.68, and 2.24 kg/ha/d) over 21 days during the early vegetative growth stage. Thereafter, all plants were treated with the same N rate of 1.12 kg/ha/d until the end of the season. Increasing the early-season N rate increased marketable yield by 15% to 18%, but it had no significant effect on any fruit quality attributes. Contrarily, marketable yield was similar in both seasons, whereas fruit quality showed remarkable seasonal variations. In the season with higher solar radiation and lower temperature, RH, and rainfall during the fruit development period, berries were redder with increased anthocyanin accumulation but had lower pH, acidity, and soluble solids. These results suggest that season has a greater effect on fruit quality than early-season N fertilization, which is complex to dissect because of the interaction between fruit quality attributes and environmental conditions. The use of high N rates during the early season appears to be an effective strategy to improve the profitability of winter strawberry production. Importantly, this fertilization technique has a minimal risk of compromising fruit quality or fertilizer N use efficiency. View Full-Text
Keywords: anthocyanin; fertility; fertilizer; Florida; Fragaria ×ananassa; fruit quality; nutrient management anthocyanin; fertility; fertilizer; Florida; Fragaria ×ananassa; fruit quality; nutrient management
►▼ Show Figures 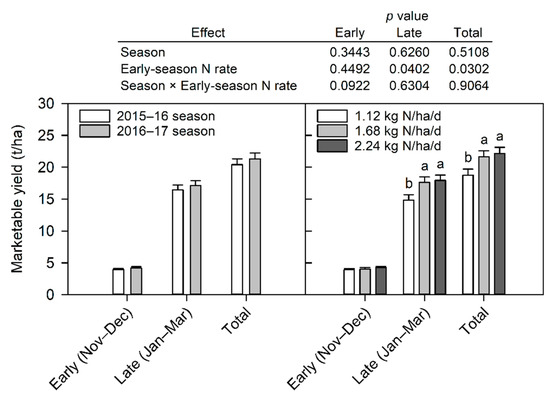