The Use of Proline in Screening for Tolerance to Drought and Salinity in Common Bean (Phaseolus vulgaris L.) Genotypes
Previous Article in Special Issue

Watermelon and melon crops are affected by some important soil-borne fungal diseases like carbonaceous rot (Macrophomina phaseolina), collapse (Monosporascus cannonballus), or the most important pathology at an economic level, the Fusarium wilt (Fusarium oxysporum f. sp. niveum, F. oxysporum f. sp. melonis, F. solani f. sp. cucurbitae, Neocosmospora falciformis, and N. keratoplastica). The methods commonly used for their control are often ineffective, thus new approaches, as the use of biological control agents, are constantly being sought. This work aimed to isolate, identify, and test endophytic fungi for their antagonistic properties against the three mentioned diseases. For this, about 350 endophytic fungal strains were isolated from asymptomatic watermelon plants. Among these, 7 fungal species were selected to evaluate their antagonistic potential against 14 pathogens. Dual culture assays allowed to select two Trichoderma strains according to the high inhibition rates observed (up to 93%), that were further employed in melon and watermelon plants, showing that some of the pathogens were controlled in terms of disease incidence, exhibiting a decrease up to 67% for T. lentiforme. In addition, three concentrations of Epicoccum purpurascens extract was selected to evaluate the germicide effect, obtaining significant differences in the growth of the pathogens depending on fermentation parameters. View Full-Text
Keywords: cucurbits; soil-borne diseases; mycoflora; endophytes; microbial antagonism; Trichoderma cucurbits; soil-borne diseases; mycoflora; endophytes; microbial antagonism; Trichoderma
►▼ Show Figures 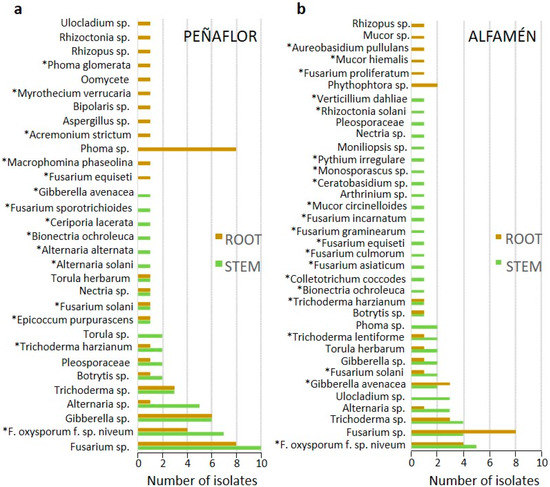 González, V.; Armijos, E.; Garcés-Claver, A. Fungal Endophytes as Biocontrol Agents against the Main Soil-Borne Diseases of Melon and Watermelon in Spain. Agronomy 2020, 10, 820.


González V, Armijos E, Garcés-Claver A. Fungal Endophytes as Biocontrol Agents against the Main Soil-Borne Diseases of Melon and Watermelon in Spain. Agronomy. 2020; 10(6):820.