The experiment was conducted from late spring to early autumn in a greenhouse, under natural illumination. Soil to set up the experiment was collected from 0–30 cm depth of a Luvisol located at Lower Silesia (Poland) (49°54′26.7″ N, 19°12′57.2″ N). Several samples were taken at random from a surface area of 100 m2, mixed and then homogenized after sieving (≤2 mm). The soil had a pH H2O value of 5.78 and the soil Corg content was 0.77% [30]. To control and minimize the heterogeneity of soil to set up a pot experiment we avoided collecting soils that are too wet to minimize soil compaction and avoided collecting soils that are too dry to aid in separating soil from roots and other residues. The pot experiment was set up in a greenhouse in the Institute of Soil Science and Plant Cultivation (IUNG) in Pulawy. The experiment was performed in four biological replications for each treatment and control in a plastic pots that were filled with 3.5 kg of soil. Six different sources of EOM were applied at 2 rates giving in total 12 treatments. EOM sources are described in detail below. The dose of EOM for each treatment was determined after considering the nitrogen required for each dose and the dry matter content and they accounted for 50% (50% N from EOM and 50% from mineral N) and 100% (100% N from EOM) of the total requirement for nitrogen fertilization. In wheat cultivation, the required nitrogen dose is 140 kg ha−1 of the soil, therefore doses of EOM for each treatment were calculated taking into consideration this value of nitrogen as a total 100% dose of N. Moreover, soil without EOM additions was used as a control object, in which full nitrogen fertilization rate was supplied from mineral fertilization with NH4NO3 (100% from mineral N, EOM dose 0%). The calculated doses of EOM were entirely well mixed with the soil, the soil with additives was homogenized through intensive mixing, immediately filling the particular pots. Seeds of the spring wheat variety of Tybalt were sown. This variety has been chosen due to its characteristics: excellent resistance to mildew, great flexibility in drilling date, high yields, morphology of plant: shorts plants with stiff straw, the strong position of this variety in Western Europe, and also its recommendation for UK, France and Germany.
Soil samples were collected after harvesting, 90 days after the application of EOM. The experiment was carried out to allow time for decomposition of used organic materials and taking into account the duration of the vegetative stage of spring wheat (after 90 days a spring wheat is heading into the development stage). Fresh soil samples were taken from each pot separately, and the experiment was designed for four biological replications for each of tested treatments. Directly after collection, the soil samples were immediately used for measurements or stored at 4 °C for dehydrogenases activity (DHA) and community-level physiological profiling (CLPP) analyses or at −80 °C for DNA extraction.

The organic wastes tested in the experiment were residues from local factories e.g., a sugar factory, a fry factory, or they were made from organic, compostable waste originating from the Polish–Czech borderland region. The reasons of this choice was rational waste management at the place of its generation.

Compost (Cof)—organic fertilizer, produced by the homogenization and composting of materials containing degradable organic substances, sewage sludge from the treatment of waste waters, sawdust, biodegradable garden and park waste, soil, mouldings of medicinal plants (wastes from solvent extraction), lime sludge.
Compost (Cdw)—organic fertilizer, made from separated biodegradable wastes from households such as kitchen wastes (food, vegetable and fruit wastes), garden and park waste (grass, leaves, weeds, soil) and other biodegradable wastes (wood ash, sawdust etc.), wood wastes and sewage sludge from communal sewage disposal plants.
Animal meal (Man)—organic fertilizer produced from animal by-products (classified as category 2 and 3 materials) by techniques that comply with Regulation (EC) No 1069/2009 of the European Parliament and Council.
Digestate (Dgf)—digestate from a biogas plant fed by wastes from a fry factory. The main ingredients are potato peelings, misshapen and defective fries and excess sludge.
Digestate (Dgs)—digestate from a biogas plant fed with 100% sugar beet pulp. The biogas plant is located next to the sugar factory in Poland.
Digestate (Dga)—digestate from an agricultural biogas plant fed with silage maize (70% of the input) and slurry (30% of the input).
Each organic residue was thoroughly homogenized and analysed before use (Table 1).

The characterization of the CLPPs was based on the metabolic properties of the soil microbiome obtained using Biolog ECO plates [31] for the bacterial community, Biolog FF plates for the aerobic fungal community, and Biolog AN plates for the anaerobic community. The Biolog system is a useful technique, which is used to assess the shifts in the microbial community functional diversity of the soil. Portions of the sieved soil (1 g) were shaken with 99 mL of sterile saline peptone water for 20 min at 20 °C and subsequently incubated at 4 °C for 30 min. Then the soil microorganism’s suspension was inoculated into each well of the ECO plates (120 µL), FF and AN plates (100 µL) and incubated at 27 °C. AN plates were incubated under anaerobic conditions, in special jars with a gas mixture containing 5% H2, 10% CO2, 85% N2, gas was injected into each jar using an Anoxomat apparatus (MART Microbiology B.V., USA). The microbial functional profile was recorded by measuring the absorbance (590 nm) during 240 incubation hours at 24 h intervals. The most consistent readings allowing good resolution among the treatments came from the 120 incubation hour Biolog Plates and these were used in the analyses. Based on absorbance measurements the average well colour development (AWCD) [32] or average well density development (AWDD) [33] were determined. These parameters are factors of the overall metabolic activity of environmental microorganisms. Moreover, biodiversity indices such as Shannon (H) and Simpson (S) were calculated following [34].

The relative abundance of AOA within the total DNA community of treatments was characterized through a T-RFLP analysis for relative quantification of individual terminal restriction fragments within the polymerase chain reaction (PCR) products. The T-RFLP approach is recommended as a reliable technique for environmental research to show similar general community patterns and offers a solid alternative for comprehensive assessment of microbial communities [35,36]. The functional amoA gene coding the α-subunit of the ammonia monooxygenase was used as a biomarker. Genomic DNA was extracted from a 0.5 g of soil sample using a FastDNA SPIN Kit for Faeces (MP Biomedicals, Solon, OH, USA) according to the manufacturer’s protocol.
PCR was performed in a total volume of 30 μL containing 4 ng of DNA template, 15 μL RedTaq® ReadyMix™ PCR Reaction Mix (Sigma-Aldrich, St. Louis, MO, USA). The concentration of the primers used for PCR was 0.5 μM. Forward primers: amoA 19F—labelled with 6-carboxyfluorescein- FAM on 5′ end (5′-ATG GTC TGG CTW AGA CG-3′) and reverse primer: amo 643R—(5′-TCC CAC TTW GAC CAR GCG GCC ATC CA-3′) [37]. The amplification reaction was performed as follows: 5 min at 92 °C, 35 cycles of 45 sec at 92 °C, 30 sec at 59 °C, 1 min at 72 °C, 7 min at 72 °C. The PCR products (700 bp) were purified with ExoSAP-IT® PCR Products Purification Kit for ABI (Affymetrix Inc., Santa Clara, CA, USA). The total volume of the restriction mixture was 10 μL and it contained approximately 50 ng DNA, 0.6 μL of buffer Tango (Fermentas® International, Burlington, ON, Canada), and 0.6 μL of restriction enzyme (10 U/μL) AluI or Csp6I (Fermentas® International, Burlington, ON, Canada), the mixture was incubated at 37 °C for 2 h, subsequently, the reaction was terminated by incubation at 65 °C for 20 min. 1 μL of digested product was mixed with 9 μL of deionized formamide and 0.5 μL of DNA fragment length standard (GS-600LIZ, ABI) (Applied Biosystems, Foster City, CA, USA) and placed on a 96-well plate. The samples were denatured at 94 °C for 3 min and then snap-cooled with ice. The fluorescently labelled terminal restriction fragments (T-RFs) were run through an ABI 3130 xl capillary sequencer (Applied Biosystems, Foster City, CA, USA) in the GeneScan mode. T-RFLP data were analysed using GeneMaper® Software v.4.0 (Applied Biosystems, Foster City, CA, USA).

DHA was determined according to the Thalmann method [38] with TTC (triphenyl tetrazolium chloride) used as a substrate, in Tris-HCl buffer (pH 7.4). Incubation was conducted for 96 h at 30 °C. Enzymatic activity was determined spectrophotometrically at 485 nm, with reference to methanol.

Statistical analysis was performed with Statistica Software (version 13. software, StatSoft Inc., Tulsa, OK, USA, 2011). Data (AWCD/AWDD/DHA/H/S) were evaluated by analysis of variance (ANOVA) and following the significant differences between treatment were estimated by the post-hoc Tukey HSD (honestly significant differences) test at the p < 0.05 significance level.
The most frequently used form of analysis and comparison of the obtained genetic and metabolic profiles is statistical cluster analysis (the determination of the relationship between the populations using a dendrogram) [39]. Therefore, multivariate cluster analysis was used to assess the level of substrates utilization in Biolog Plates. Moreover, to show potential patterns in the dataset of each treatment and control objects, data visualizations were presented as heat maps. Moreover, dendrograms were prepared on the basis of cluster analysis from the normalized metabolic and genetic data and representing the scaled similarity (%) on the axis (Ward’s method and the unweighted pair group method with arithmetic mean, UPGMA) and the boundary marked according to Sneath’s criteria (restrictive 33% and less restrictive 66%). The data were also evaluated following multidimensional scaling to detect additional relationships between treatments. Differences between treatments were analyzed by principal component analysis (PCA) based on the results of community level physiological profiling and T-RFLP data.

In summary, we analysed the impact of six sources of EOM (compost, digestate waste and animal meat bone meal) on the soil microbiome (as determined by functional and genetic diversity and dehydrogenases activity) in comparison with mineral strategies. The study included the evaluation of soil supplementation with selected EOM, which can increase soil organic matter content. The results indicated that the addition of EOMs to soils may alter the soil microbiological properties, however the degree of modification depended on the type of EOMs used. The results suggest the possibility of using the tested organic wastes as a fertilizer and also as a source of organic matter. This approach is a beneficial solution to the problem of increasing volumes of organic waste and also with the observed decrease in the content of soil organic matter. The results presented in this paper show that even the complete replacement of mineral fertilizer by EOMs (treatment without the use of mineral fertilizer) allows for the continuation of microbiological processes at a similar level. It is a very significant effect, which is relevant to the producers of organic waste and for farmers who have requirements for the provision of adequate fertilization for crops while simultaneously caring for the condition of the soil environment.

This research is one of the output of the project “Risks and benefits of introducing exogenous organic matter into the soil” (CZ.3.22/1.2.00/12.03445) realized within Cross-border Cooperation Operational Programme between the Czech Republic and Poland 2007-2013, which was co-financed by European Regional Development Fund (ERDF).

The pot experiment was performed in the Institute of Soil Science and Plant Cultivation State Research Institute in Puławy. 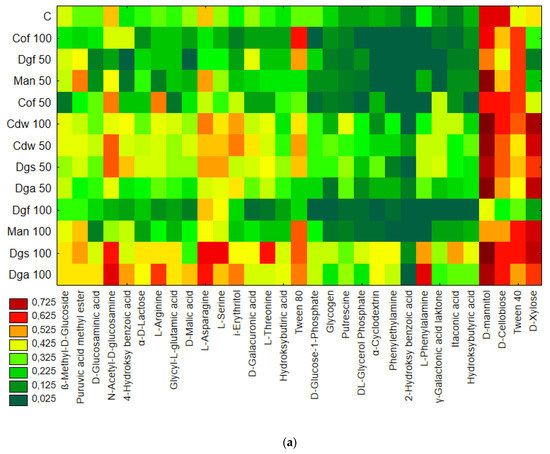 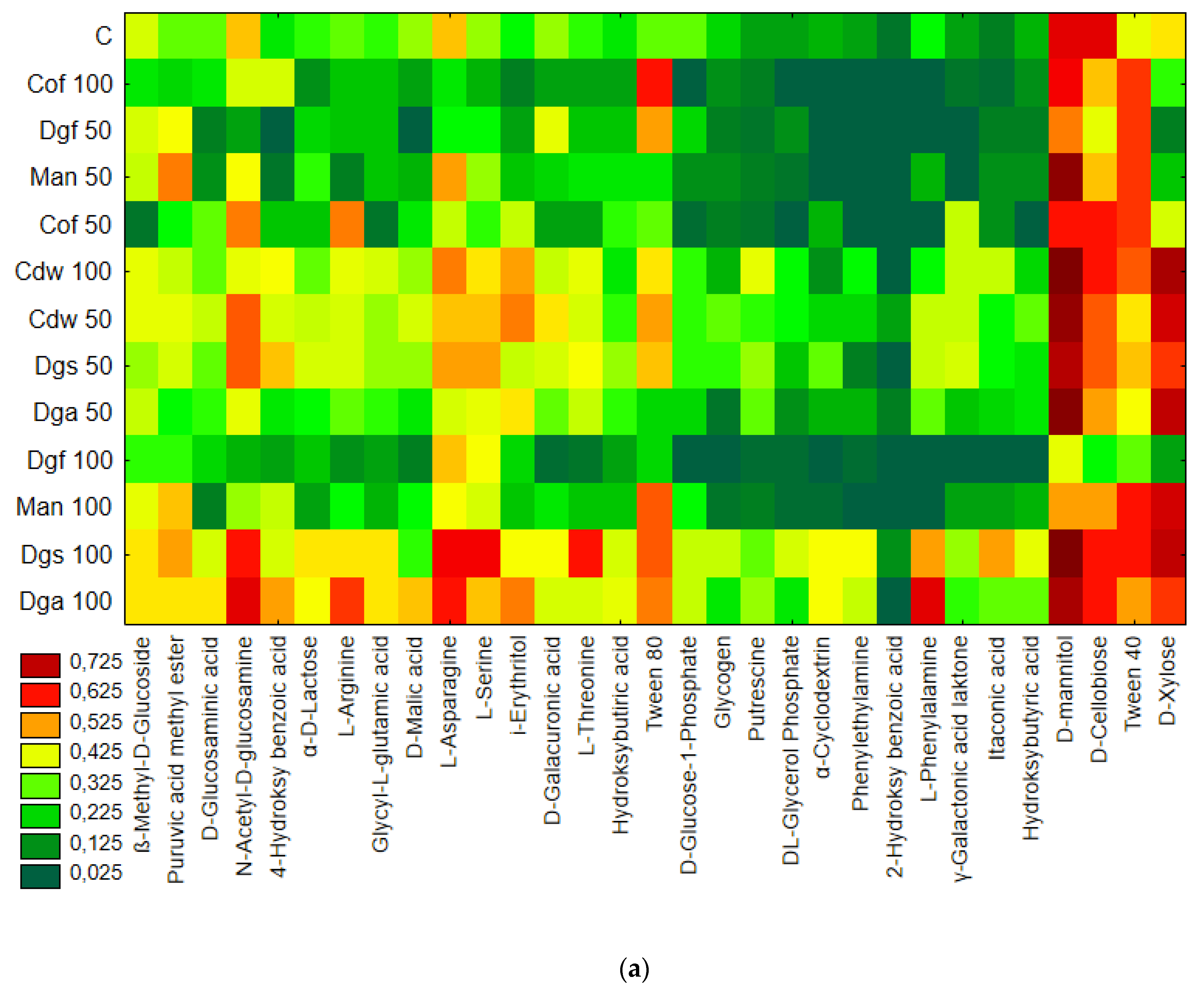 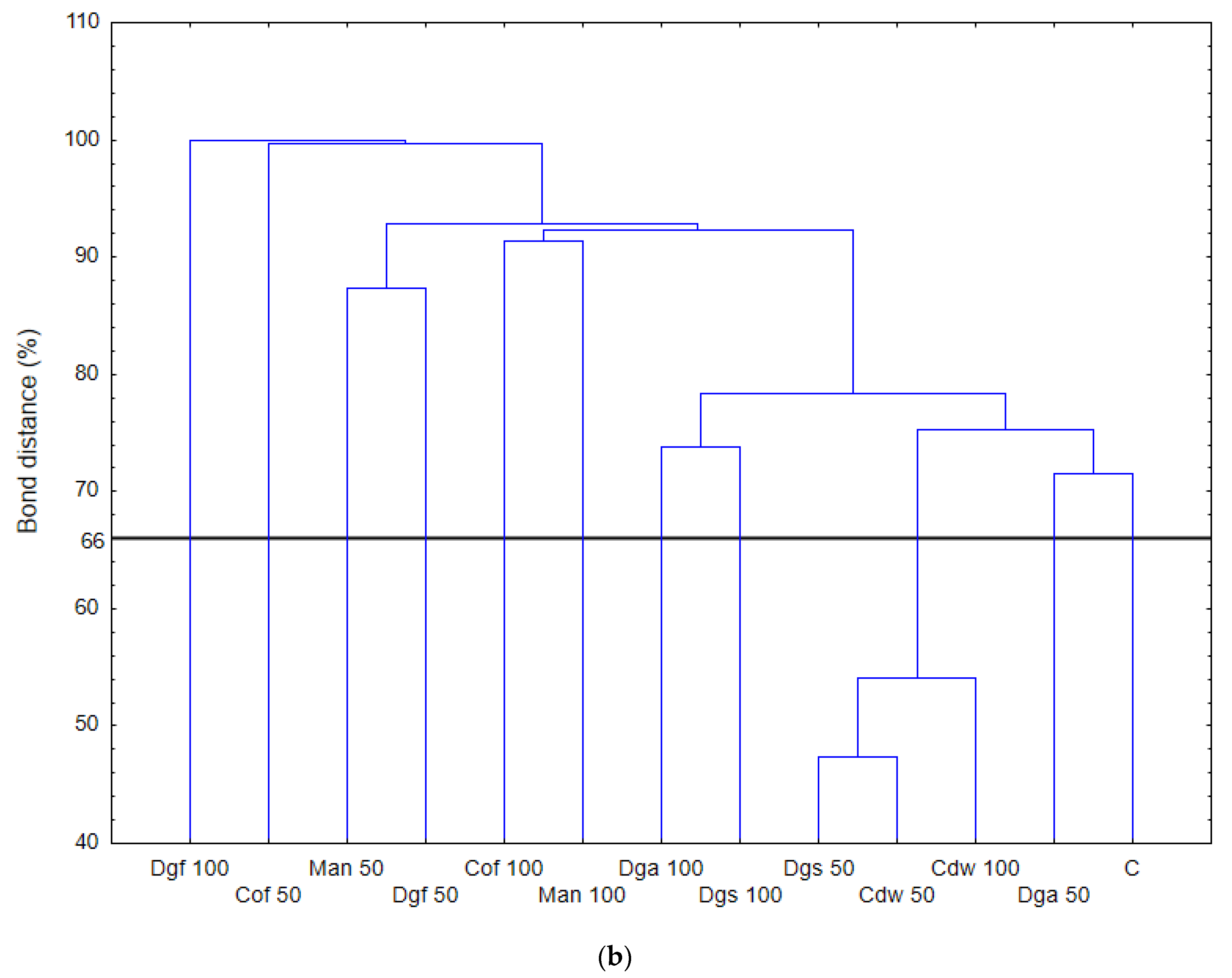 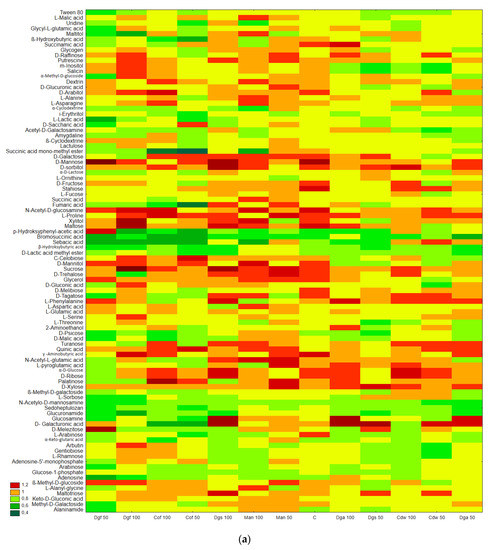 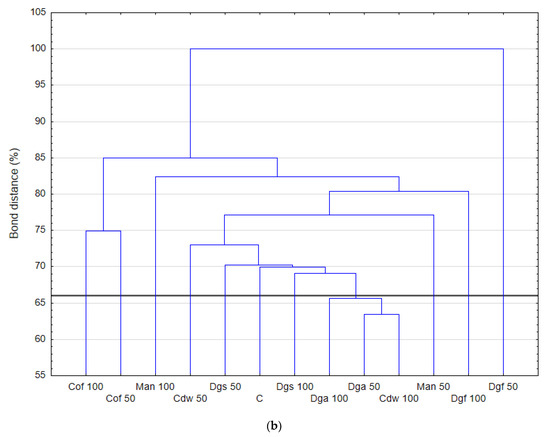 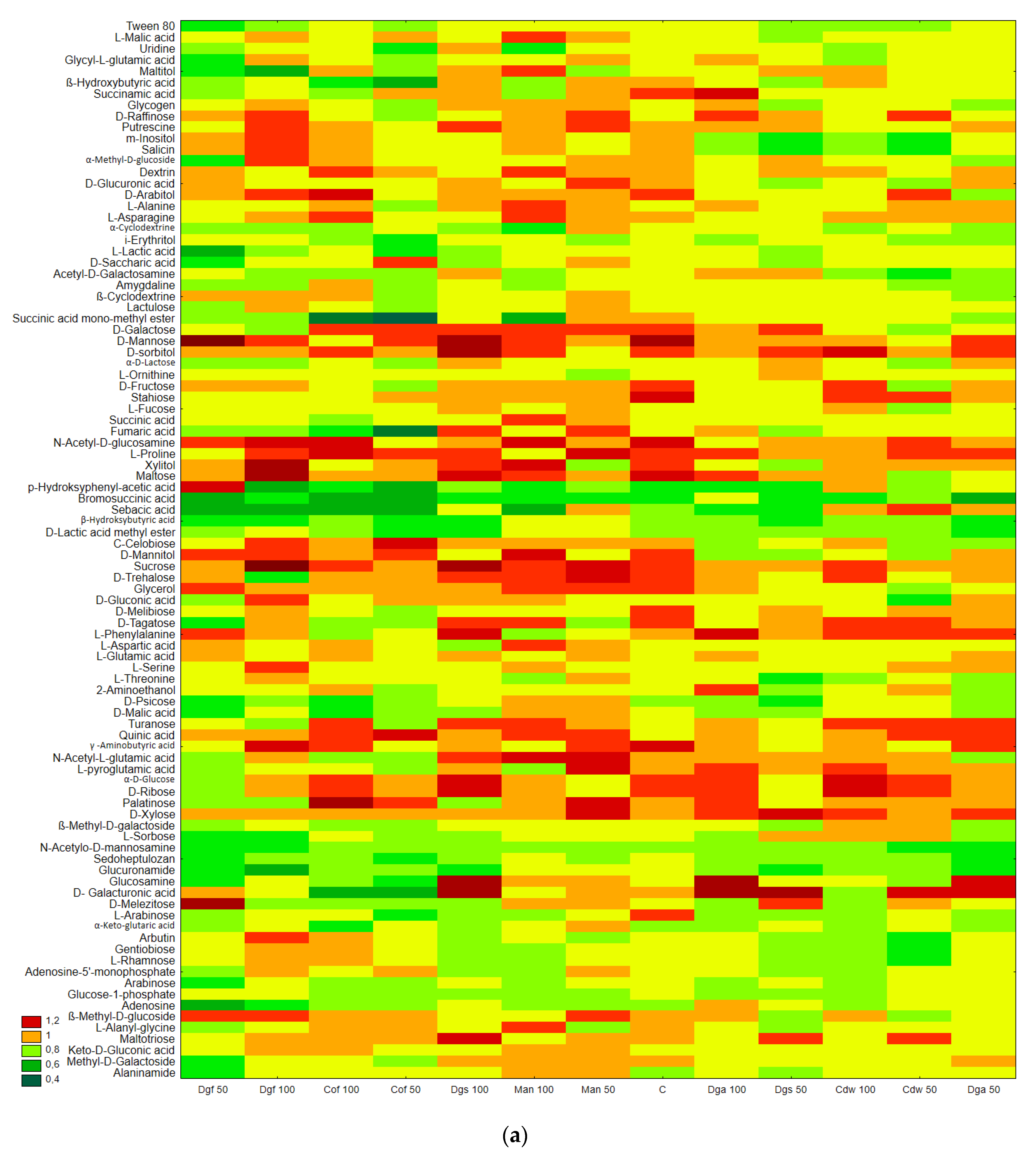 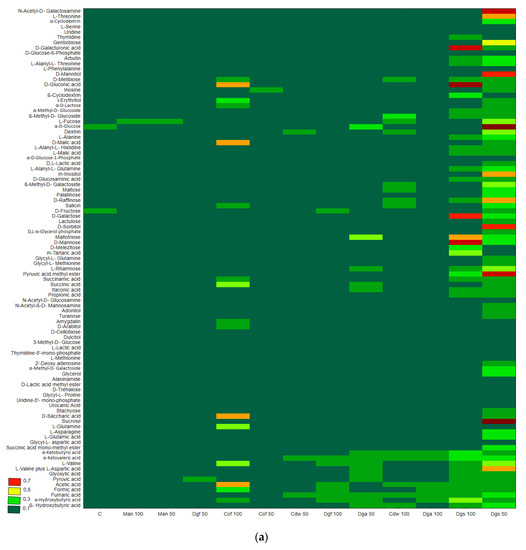 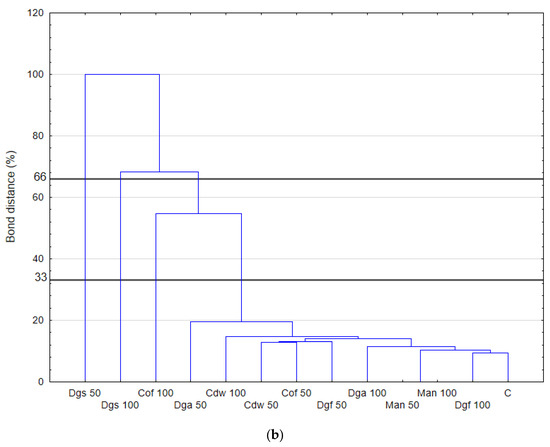 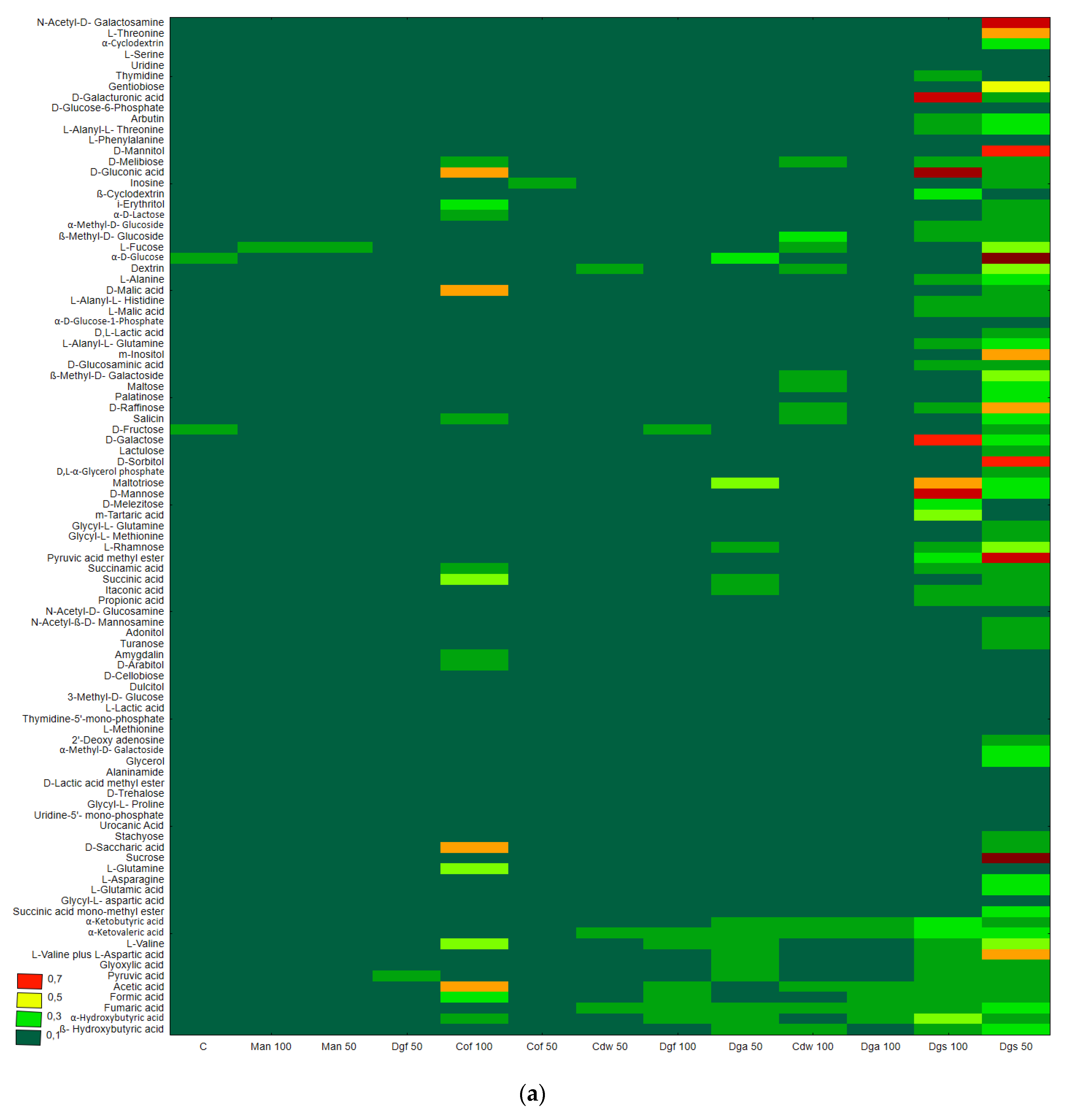 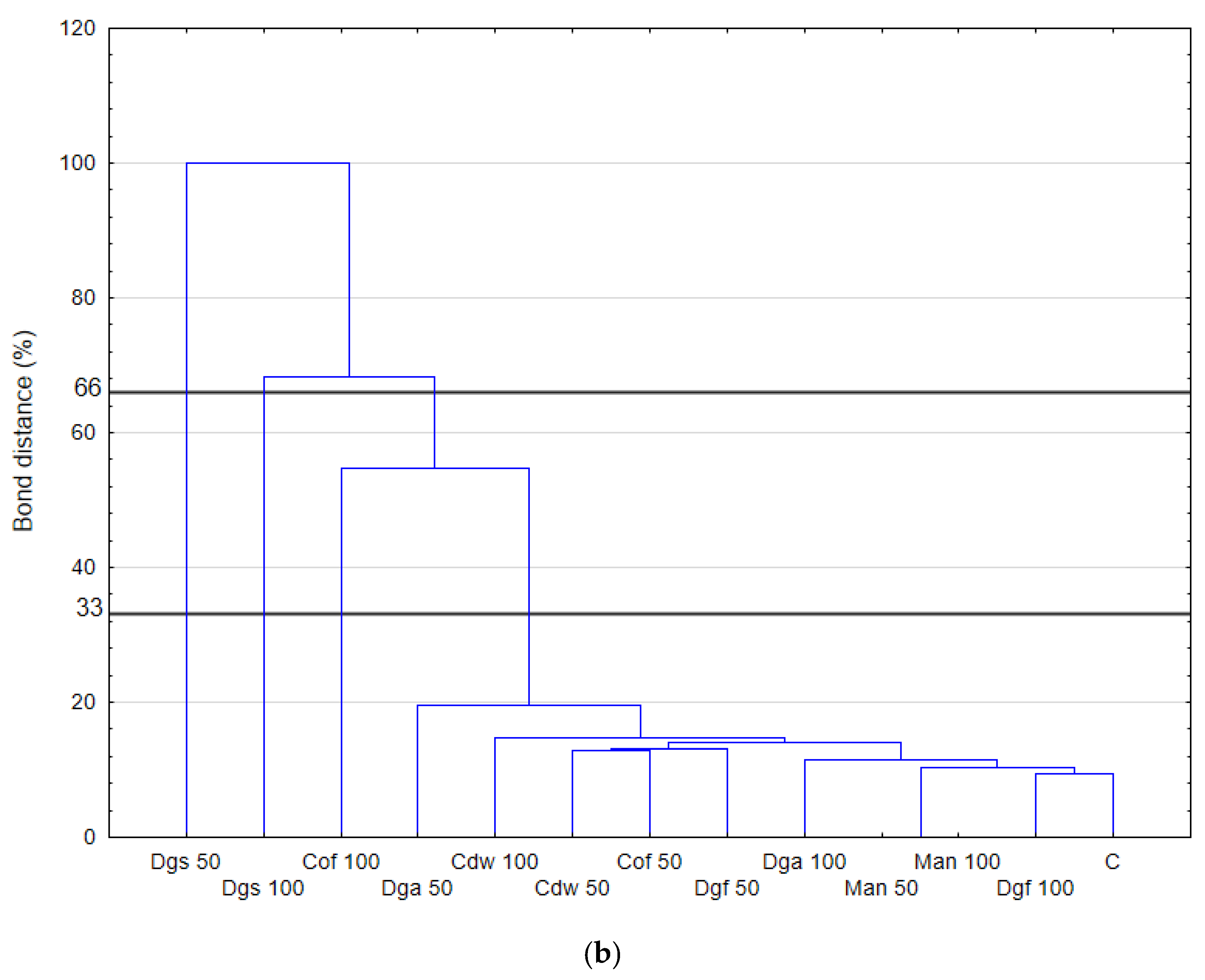 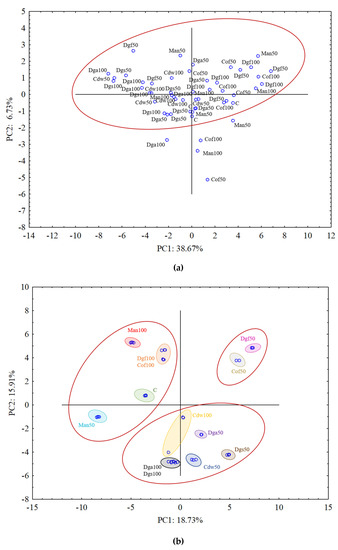 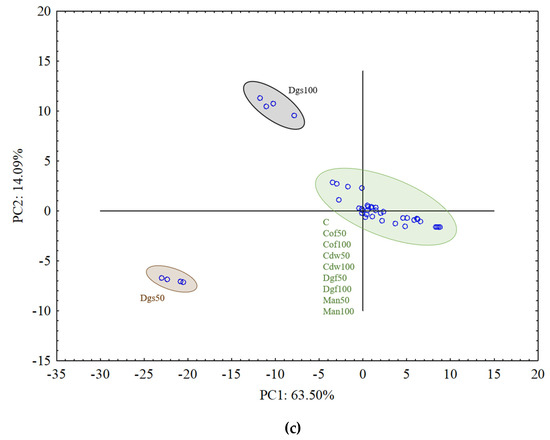 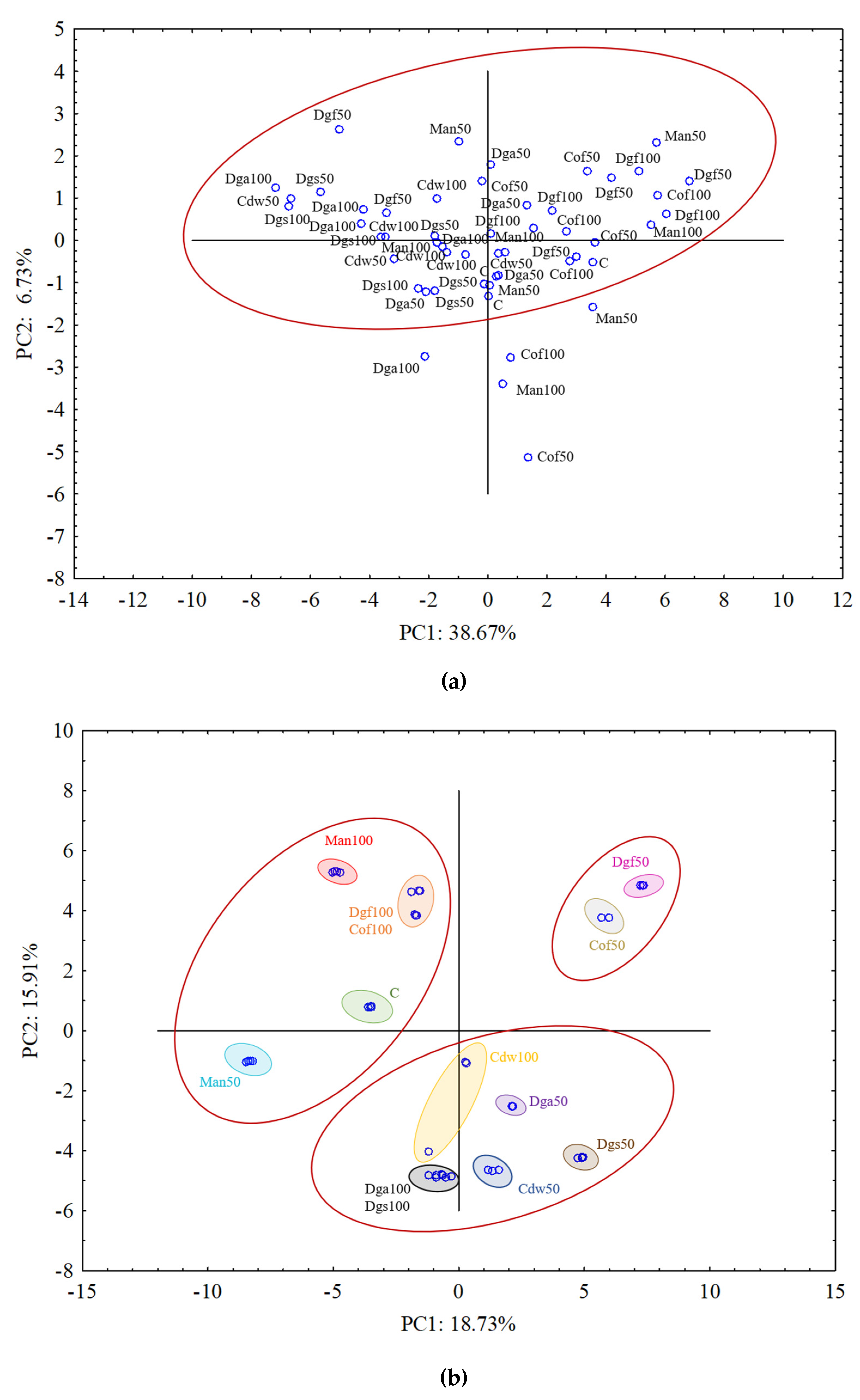 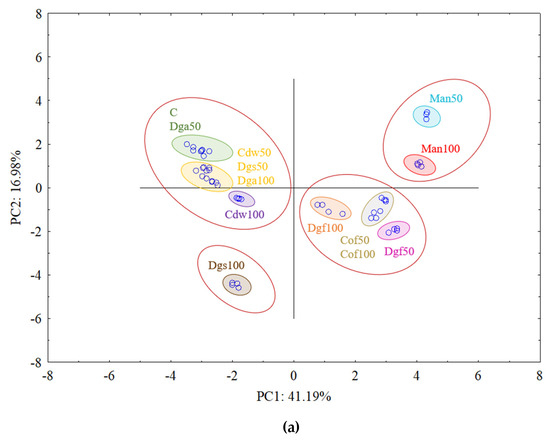 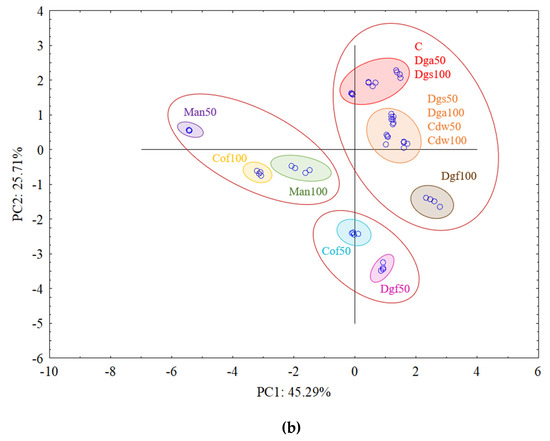 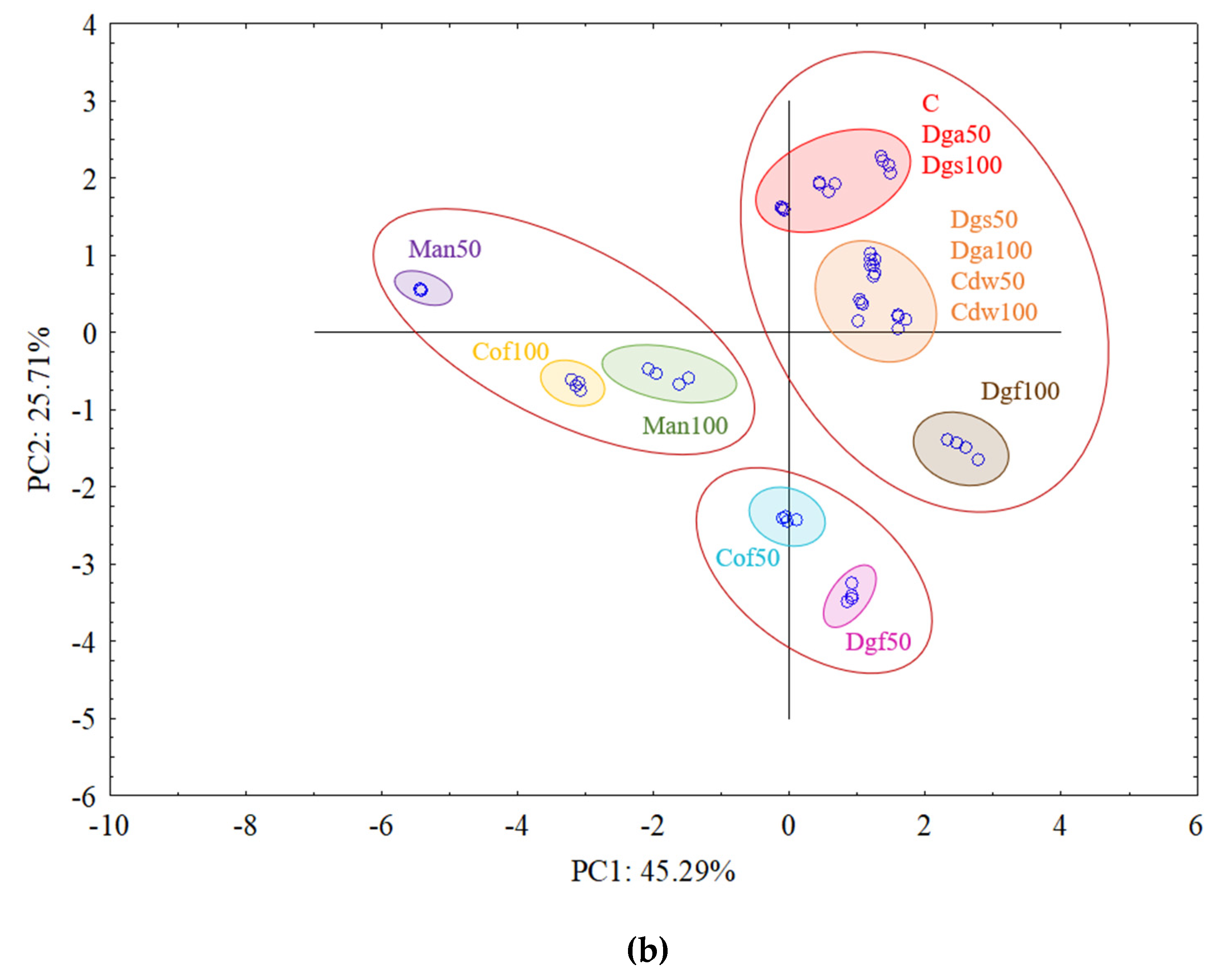 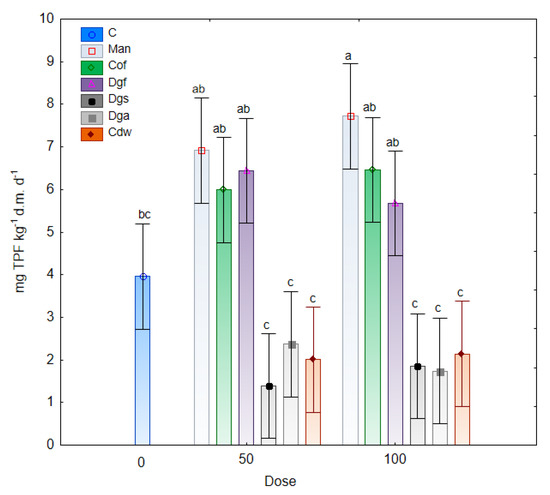 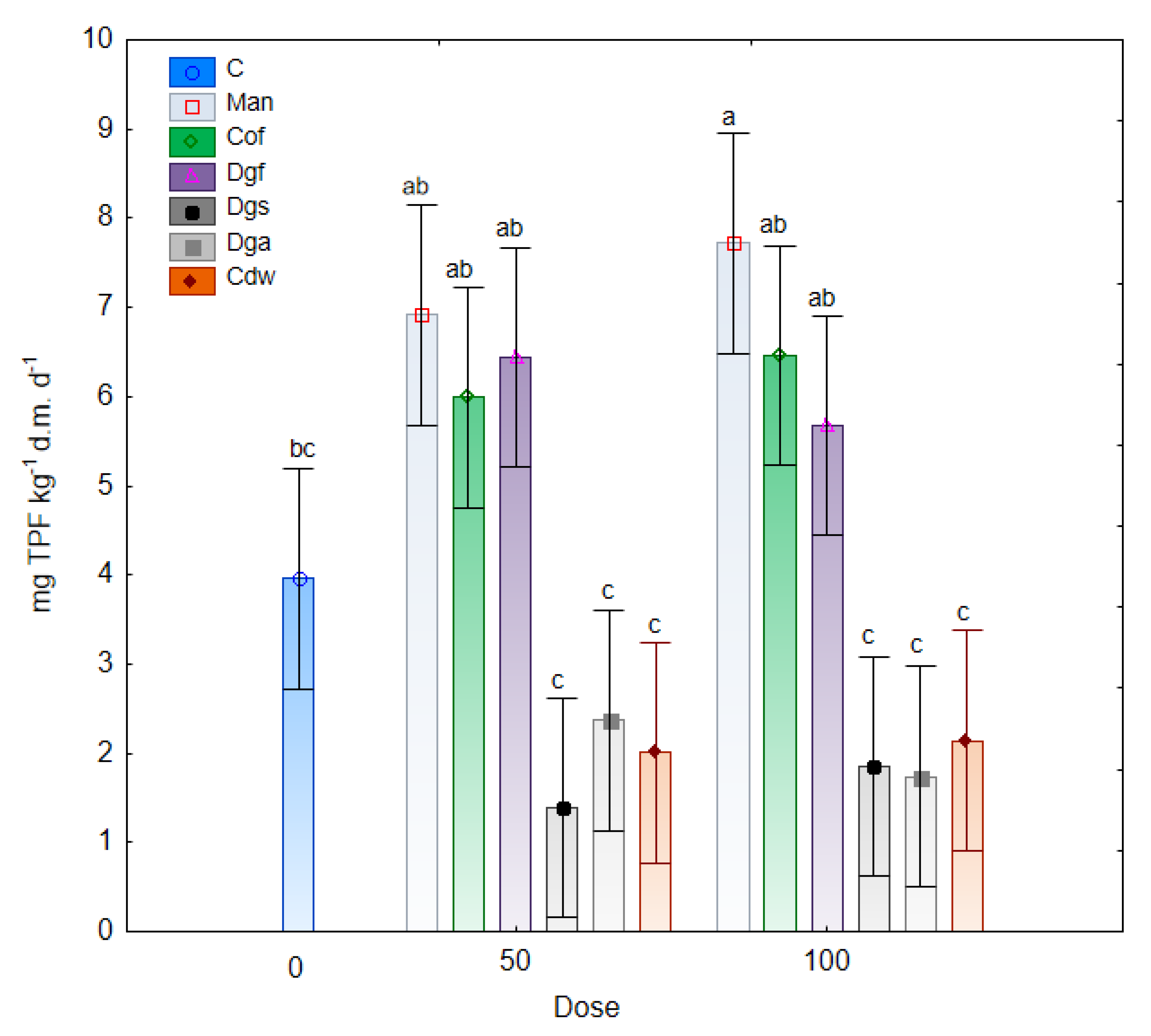