How the current distribution of tea cultivation is influenced by specific environmental conditions in Sri Lanka is yet to be explored. Therefore, this study aims to assess the differences between tea and non-tea growing areas with respect to climatic and topographic covariates, and to determine the major covariates that control tea distributions. Climatic data of temperature and rainfall were extracted from WorldClim-Global Climate Data; the elevation, slopes, and aspects were obtained from Global Multi-resolution Terrain Elevation Data; and the solar radiation data was computed using a clear-sky solar radiation model. Random points were created on rasterised environmental layers for tea-growing and non-tea growing areas, stratified into low, mid, and high regions, using ArcGIS version 10.4.1 (Environmental Systems Research Institute: ESRI Redlands, CA, USA).Correlations were derived between covariates and tea and non-tea growing areas. According to the logistic regression analysis, there was no significant influence of the south-west, west, and north-west aspect compared to the north aspect when all other covariates were held constant. The odds ratio indicated that an area with a one-unit higher solar radiation was 1.453 times more likely to be a tea growing area. Similarly, a per unit increase in slope increases the likelihood of an area being suitable for tea cultivation by 1.039 times. When the annual mean temperature increased, the suitability of tea cultivation decreased, but an increased rainfall had increased the suitability of an area for tea cultivation. Areas with a north facing slope had the highest suitability for tea cultivation. This research demonstrated that tea growing could be expanded into a variety of locations as long as these variables are either found or managed in order to obtain the critical levels. In addition, it is proposed that the results of this study could be utilised in the assessment of the climate or/and land suitability for tea. View Full-Text
Keywords: Camellia sinensis; tea suitability; temperature; rainfall; solar radiation; topographic features Camellia sinensis; tea suitability; temperature; rainfall; solar radiation; topographic features
►▼ Show Figures 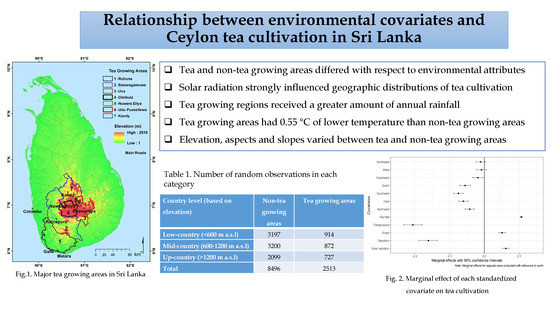