A Comparison of Selected Biochemical and Physical Characteristics and Yielding of Fruits in Apple Cultivars (Malus domestica Borkh.)

To investigate the effects of exogenous spermidine (Spd) on metabolism changes under salt stress in cucumber roots, a gas chromatography-mass spectrometry (GC-MS) was performed. The results showed that most of the 142 metabolites responded to salt stress or exogenous Spd treatment. Salt stress reduced carbon consumption, resulted in the transformation of glycolysis and the tricarboxylic acid (TCA) cycle to the pentose phosphate pathway (PPP), and meanwhile increased salicylic acid (SA) and ethylene synthesis, and, thus, inhibited the growth of seedlings. However, exogenous Spd further improved the utilization of carbon, the energy-saving pattern of amino acid accumulation, and the control of hydroxyl radicals. In conclusion, Spd could promote energy metabolism and inhibit SA and ethylene synthesis in favor of root growth that contributes to higher salt tolerance. This study provides insight that may facilitate a better understanding of the salt resistance by Spd in cucumber seedlings. View Full-Text
Keywords: spermidine; salt stress; roots; metabolomics; cucumber spermidine; salt stress; roots; metabolomics; cucumber
►▼ Show Figures 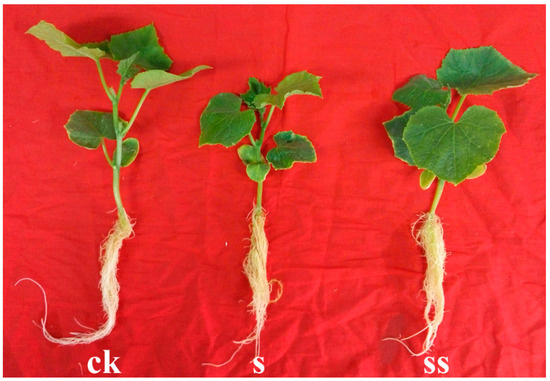