The ‘Palo a Pique’ Long-Term Research Platform: First 25 Years of a Crop–Livestock Experiment in Uruguay

Mixed crop–livestock long-term experiments (LTE) are critical to increase the understanding of sustainability in complex agroecosystems. One example is the ‘Palo a Pique’ LTE which has been running for 25 years in Uruguay (from 1995 to present), evaluating four pasture–crop rotations under livestock grazing with no-till technology in soils with severe limitations. The results demonstrate that cropping systems reduced soil organic carbon (SOC) compared with permanent pastures, and that perennial pastures rotating with crops were critical to mitigate SOC losses. Data from the ‘Palo a Pique’ LTE has contributed to the establishment of new national policies to secure the sustainability of agricultural-based systems. Although the original purpose of the LTE was oriented to crops and soils, a demand for sustainable livestock intensification has gathered momentum over recent years. As a result, the current approach of the ‘Palo a Pique’ LTE matches each pasture–crop rotation with the most suitable livestock strategy with the common goal of producing 400 kg liveweight/ha per year. General approaches to the pursuit of sustainable livestock intensification include shortening the cycle of production, diversifying animal categories, increasing liveweight gain and final animal liveweight, and strategic livestock supplementation. Prediction of trade-offs between environmental, economic, and production indicators can be addressed through monitoring and modeling, enabling the timely anticipation of adverse sustainability issues on commercial farms. The ‘Palo a Pique’ LTE serves as a framework to address contemporary and future questions dealing with the role of ruminants on climate change, competition for land, nutrient dynamics, and food security. View Full-Text
Keywords: crop–livestock; pasture–crop rotations; sustainability; sustainable intensification; long-term experiments crop–livestock; pasture–crop rotations; sustainability; sustainable intensification; long-term experiments
►▼ Show Figures 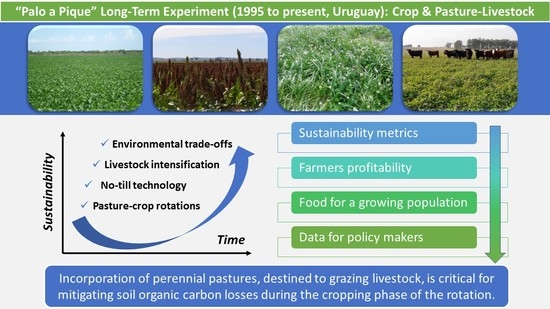