The impact of climate change on viticulture is of major importance. Several international and indigenous grapevine cultivars have been examined for their adaptive performance to drought and heat stresses. However, the underlying physiological mechanisms are not well known. In the present study we examined the short-term effects of light and moderate drought stress (DS) as well as heat stress (HS) on physiological and biochemical attributes in two grapevine cultivars: Chardonnay (international) and Xynisteri, an indigenous adapted to the specific Cypriot microclimate. Xynisteri plants exhibited decreasing leaf stomatal conductance and photosynthetic rate as well as increasing total phenols and antioxidant capacity under DS conditions. These reactions were concomitant to a rapid accumulation of hydrogen peroxide and lipid peroxidation in leaves, associated to an increase of the antioxidant superoxide dismutase activity. However, Chardonnay plants did not exhibit the same responses as Xynisteri against DS (i.e., stomatal closure, total phenolics and antioxidants) over the first four days. Additionally, Chardonnay showed leaf damage with increased lipid peroxidation levels and activation of catalase and peroxidase. Interestingly, HS increased leaf stomatal conductance and decreased total phenolic content, flavonoids and antioxidant capacity in Chardonnay after 20 d of stress. In both cultivars, HS had milder effects compared to DS, and again Xynisteri showed better performance than Chardonnay in terms of damage index and antioxidative activities. Overall, Xynisteri adaptation to DS and HS was higher than that of Chardonnay, and both cultivars reacted more to the short-term DS than to HS. Although the Xynisteri performances under stress conditions provide an important resource for adaptation to stressful conditions, the impacts on earliness, yield and grape quality remain to be explored. View Full-Text
Keywords: climate change; drought stress; heat stress; photosynthesis; antioxidants; lipid peroxidation climate change; drought stress; heat stress; photosynthesis; antioxidants; lipid peroxidation
►▼ Show Figures 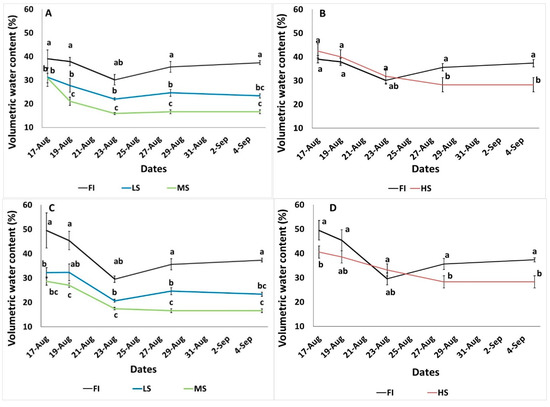 Tzortzakis, N.; Chrysargyris, A.; Aziz, A. Adaptive Response of a Native Mediterranean Grapevine Cultivar Upon Short-Term Exposure to Drought and Heat Stress in the Context of Climate Change. Agronomy 2020, 10, 249. https://doi.org/10.3390/agronomy10020249


Tzortzakis N, Chrysargyris A, Aziz A. Adaptive Response of a Native Mediterranean Grapevine Cultivar Upon Short-Term Exposure to Drought and Heat Stress in the Context of Climate Change. Agronomy. 2020; 10(2):249. https://doi.org/10.3390/agronomy10020249


Tzortzakis, Nikolaos, Antonios Chrysargyris, and Aziz Aziz. 2020. "Adaptive Response of a Native Mediterranean Grapevine Cultivar Upon Short-Term Exposure to Drought and Heat Stress in the Context of Climate Change" Agronomy 10, no. 2: 249. https://doi.org/10.3390/agronomy10020249