Nitrogen (N) fixation is essential in the development of sustainable agriculture, but nodulation of legumes is usually inhibited by N fertilization. In this study, we evaluated the increased density of intercropped maize (Zea mays L.) as a means to alleviate the inhibitory effect of soil mineral N on intercropped pea (Pisum sativum L.) and improve system performance. A field experiment was conducted in the Hexi Corridor region of northwestern China from 2012 to 2014. The experiment consisted of monoculture pea, monoculture maize, and a pea/maize strip-intercropping system. Two levels of N fertilization were evaluated in both cropping systems during the co-growth period of intercropping, i.e., 0 kg N ha−1 (N0) and 135 kg N ha−1 (N1), and three maize densities were evaluated with both levels of N fertilization in the intercropping system, i.e., 45,000 plants ha−1 (D1), 52,500 plants ha−1 (D2), and 60,000 plants ha−1 (D3). The application of N reduced the number of nodules of intercropped pea by 135% at D1 and by 9% at D2 compared to no application of N, in all the years examined. The alleviation of the inhibitory effect of soil mineral N on the nodulation of intercropped pea (Cis) was calculated as the percentage increase in nodulation with intercropping relative to monoculture for a given level of N fertilization. With the application of N, Cis was improved by increased intercropped maize density (D3 > D2 > D1) at all stages. The internal efficiency of nitrogen (IEN) of pea was improved with intercropping and, on average, was 19% and 12% greater at D3 than at D1 and D2, respectively. These results demonstrate that increased maize density can alleviate the inhibitory effect of soil N on the nodulation of pea and sustain the productivity of maize/pea intercropping while reducing N fertilizer requirements in arid regions. View Full-Text
Keywords: maize/pea intercropping; plant density; nitrogen use efficiency; root nodules maize/pea intercropping; plant density; nitrogen use efficiency; root nodules
►▼ Show Figures 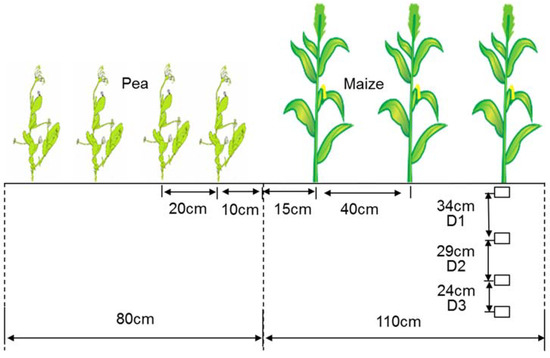