For improving the therapeutic efficiency of tumors and decreasing undesirable side effects, ternary complexes were developed by coating pH-sensitive PEG-b-PLL-g-succinylsulfathiazole (hereafter abbreviated as PPSD) with DNA/PEI polyplexes via electrostatic interaction. PPSD can efficiently shield the surface charge of DNA/PEI. The gene transfection efficiency of ternary complexes was lower than that of DNA/PEI at pH 7.4; however, it recovered to the same level as that of DNA/PEI at pH 6.0, attributed to the pH-triggered release of DNA/PEI from ternary complexes. Cell uptake results also exhibited the same trend as transfection at different pH values. The suitable ability for pH-triggered shielding/deshielding estimated that PPSD demonstrates potential as a shielding system for use in in vivo gene delivery. View Full-Text
Keywords: gene delivery; shielding system; pH-sensitive gene delivery; shielding system; pH-sensitive
►▼ Show Figures 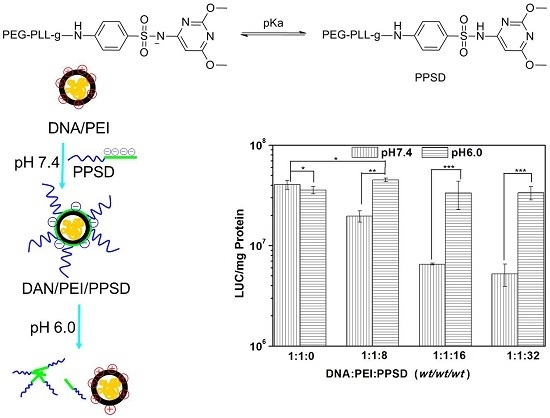