Using Sulfobutylated and Sulfomethylated Lignin as Dispersant for Kaolin Suspension

Kraft lignin is an abundant natural resource, but it is underutilized. In this study, sulfoalkylated lignin derivatives with similar charge densities but with different alkyl chain length were produced via sulfobutylation and sulfomethylation reactions. The contact angle studies revealed that sulfobutylated lignin (SBL) with longer alkyl chains had a higher hydrophobicity than sulfomethylated lignin (SML) did. The adsorption behavior of sulfoalkylated lignins was studied using a Quartz crystal microbalance with dissipation (QCM-D) on Al2O3 coated surface as representative of positively charged sites of kaolin particles. The results of adsorption studies showed that SBL deposited more greatly than SML did on the Al2O3 surface, and it generated a thicker but less viscoelastic adlayer on the surface. The adlayer thickness and configuration of molecules on the surface were also related to the zeta potential and stabilization performance of the polymers in the kaolin suspension system. The results also confirmed that both lignin derivatives were very effective in dispersing kaolin particles at neutral pH, and their effectiveness was hampered under alkaline or acidic pH. View Full-Text
Keywords: lignin; biopolymer; sulfobutylation; sulfomethylation; QCM; zeta potential; dispersion lignin; biopolymer; sulfobutylation; sulfomethylation; QCM; zeta potential; dispersion
►▼ Show Figures 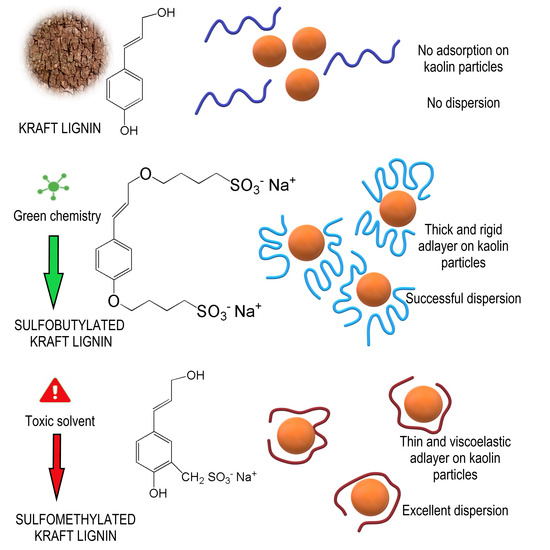