Osteoarthritis (OA) is a debilitating joint disorder affecting more than 240 million people. There is no disease modifying therapeutic, and drugs that are used to alleviate OA symptoms result in side effects. Recent research indicates that inhibition of peroxisome proliferator-activated receptor δ (PPARδ) in cartilage may attenuate the development or progression of OA. PPARδ antagonists such as GSK3787 exist, but would benefit from delivery to joints to avoid side effects. Described here is the loading of GSK3787 into poly(ester amide) (PEA) particles. The particles contained 8 wt.% drug and had mean diameters of about 600 nm. Differential scanning calorimetry indicated the drug was in crystalline domains in the particles. Atomic force microscopy was used to measure the Young’s moduli of individual particles as 2.8 MPa. In vitro drug release studies showed 11% GSK3787 was released over 30 days. Studies in immature murine articular cartilage (IMAC) cells indicated low toxicity from the drug, empty particles, and drug-loaded particles and that the particles were not taken up by the cells. Ex vivo studies on murine joints showed that the particles could be injected into the joint space and resided there for at least 7 days. Overall, these results indicate that GSK3787-loaded PEA particles warrant further investigation as a delivery system for potential OA therapy. View Full-Text
Keywords: osteoarthritis; drug delivery; particles; poly(ester amide); GSK3787; atomic force microscopy osteoarthritis; drug delivery; particles; poly(ester amide); GSK3787; atomic force microscopy
►▼ Show Figures 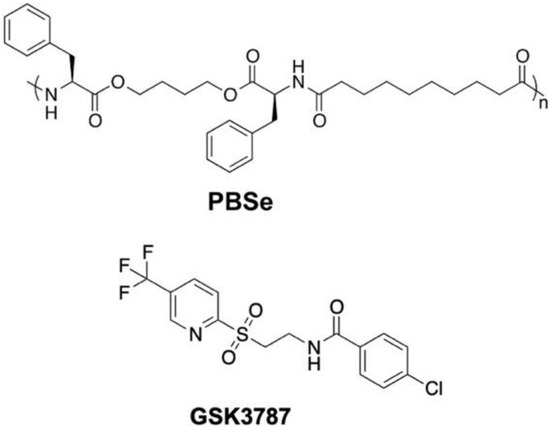