The capacity of a biomaterial to innately modulate cell behavior while meeting the mechanical property requirements of the implant is a much sought-after goal within bioengineering. Here we covalently incorporate soluble elastin into a gelatin–poly (ethylene glycol) (PEG) hydrogel for three-dimensional (3D) cell encapsulation to achieve these properties. The inclusion of elastin into a previously optimized gelatin–PEG hydrogel was then evaluated for effects on entrapped fibroblasts, with the aim to assess the hydrogel as an extracellular matrix (ECM)-mimicking 3D microenvironment for cellular guidance. Soluble elastin was incorporated both physically and covalently into novel gelatin/elastin hybrid PEG hydrogels with the aim to harness the cellular interactivity and mechanical tunability of both elastin and gelatin. This design allowed us to assess the benefits of elastin-containing hydrogels in guiding fibroblast activity for evaluation as a potential dermal replacement. It was found that a gelatin–PEG hydrogel with covalently conjugated elastin, supported neonatal fibroblast viability, promoted their proliferation from 7.3% to 13.5% and guided their behavior. The expression of collagen alpha-1(COL1A1) and elastin in gelatin/elastin hybrid gels increased 16-fold and 6-fold compared to control sample at day 9, respectively. Moreover, cells can be loaded into the hydrogel precursor solution, deposited, and the matrix cross-linked without affecting the incorporated cells adversely, thus enabling a potential injectable system for dermal wound healing. View Full-Text
Keywords: polyethylene glycol hydrogel; myofibroblast; gelatin; elastin; cell encapsulation; dermal substitu polyethylene glycol hydrogel; myofibroblast; gelatin; elastin; cell encapsulation; dermal substitu
►▼ Show Figures 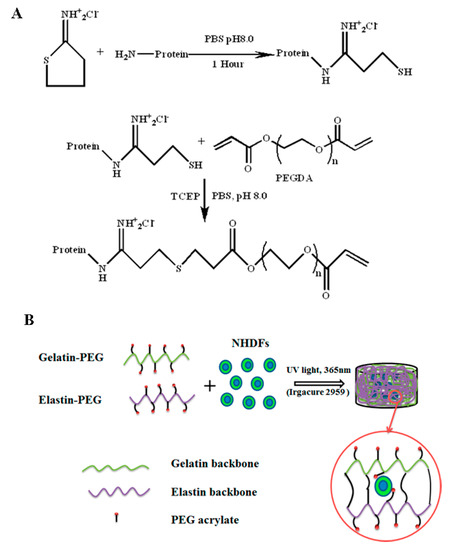