:
Kraft lignin (KL) or plasticized KL (PKL)/poly(lactic acid) (PLA) composites, containing different lignin contents and with and without the coupling agent, were prepared in this study using twin-screw extrusion at 180 °C. Furthermore, ε-caprolactone and polymeric diphenylmethane diisocyanate (pMDI) were used as a plasticizer of KL and a coupling agent to improve interfacial adhesion, respectively. It was found that lignin plasticization improved lignin dispersibility in the PLA matrix and increased the melt flow index due to decrease in melt viscosity. The tensile strength of KL or PKL/PLA composites was found to decrease as the content of KL and PKL increased in the absence of pMDI, and increased due to pMDI addition. The existence of KL and PKL in the composites decreased the thermal degradation rate against the temperature and increased char residue. Furthermore, the diffusion coefficient of water in the composites was also found to decrease due to KL or PKL addition.
Keywords:
lignin composite; twin-screw extrusion; plasticization; coupling agent

Excessive use of petroleum-derived plastics has been known to cause serious environmental problems. Recently, issues regarding microplastic (consisting of plastic fragments of <5 mm) produced using non-biodegradable conventional plastics, such as polypropylene, polystyrene, and polyethylene, have been raised [1,2,3]. Microplastic is known to be an environmental contaminant causing soil and marine pollution which threatens agriculture and food production, and consequently human health [1,2,3]. As an alternative, many governments, global organizations, and multinational corporations have implemented policies to restrict the use of disposable plastic products. Additionally, development and utilization of bioplastics have lately been receiving attention [4,5,6]. Bioplastics can be classified into biomass-derived plastics and biodegradable plastics, which can include fossil-based plastics [7]. Poly(lactic acid) (PLA), polyhydroxyalkanoate (PHA), and thermoplastic starch (TPS) are representative biomass-derived bioplastics which possess biodegradability [6,7]. Poly(butylene succinate) (PBS) and polycaprolactone (PCL) are derived from petroleum resources but can be biodegradable [7,8,9].
PLA is considered one of the most promising biopolymers due to its excellent properties, which include biodegradability, biocompatibility, and renewability, as well as good mechanical properties [10,11,12]. PLA is derived from agricultural products (e.g., corn and potato) and is usually produced by ring-opening polymerization of lactide and condensation of lactic acid without polluting the environment during the production process [6,10,13]. However, despite its properties, the application of PLA has been limited because of its higher price and lower resistance to heat and water [11,13]. It has been proposed that compounding PLA with filler can improve its properties and remove some of its drawbacks [5,11,12,13,14,15]. Recently, some studies have introduced lignin to improve the performance of PLA and reduce the cost [10,13,14].
Lignin is one of the most abundant biopolymers, accounting for nearly 25% of lignocellulosic biomass [16,17,18,19]. It is usually easily obtained as a byproduct of the pulping industry and has some positive properties, including being biodegradable, non-toxic, and low-cost and having low density and excellent thermal and moisture resistance [20,21,22,23]. Due to these properties, research on lignin application for bioplastics has increased. Lignin has been known to have positive effects on composite properties. Some studies have observed that lignin addition enhances resistance for heat and moisture [14,15,24]. Furthermore, lignin has also been utilized as a stabilizer to prevent oxidation on plastic composites [25]. However, some studies have reported that the presence of lignin can deteriorate the mechanical properties of lignin-based composites. Lignin has been found to be incompatible with most aliphatic polyesters, including PLA, PBS, and PCL, thus deteriorating the mechanical properties of the composites [26,27,28]. However, it has been found that this strength deterioration, which is caused by lignin addition, can be overcome by adding coupling agents [26,29,30,31]. Isocyanate coupling agents, such as polymeric methylene diphenyl diisocyanate (pMDI), are known to form urethane linkages due to the reaction of the –NCO group in isocyanate coupling agents and the hydroxyl groups of lignin and aliphatic polyesters. This enhances the interfacial adhesion between lignin and polyesters [28,30,31,32]. In addition, dispersion of lignin in polyester matrices has been found to be significant in developing lignin-based high-performance polyester composites [26]. Plasticization is defined as the swelling effect in the matrix structure of lignin caused by plasticizers such as polyethylene glycol, triethylene glycol, lactic acid, and succinic acid [33,34]. Various plasticizers have been used to lower the glass transition temperature (Tg) of lignin to improve its thermal flowability [34]. Plasticizers increase the free volume by spacing polymer chains and the mobility of the chain segments, resulting in a decrease in the Tg and melt viscosity [35]. The lignin plasticization will also contribute to improving the dispersion of lignin in polymer matrices [26] and the processability and toughness of the thus-obtained composite.
In this study, lignin/PLA composites were prepared using twin-screw extrusion. Furthermore, the effects of lignin plasticization and pMDI addition on tensile properties, melt flowability, and thermal and moisture stability of lignin/PLA composites were investigated.

For this study, PLA (IngeoTM Biopolymers 6400D) with a specific gravity of 1.24 and melt flow rate of 6.0 g/10 min at 210 °C and a load of 2.16 kg was obtained from Natureworks LLC (Minnetonka, MN, USA). Kraft lignin (KL) was isolated from the black liquor produced from hardwood chips by Moorim Pulp & Paper Co. (Ulsan, Korea) using the method described by Kim et al. [17]. The precipitated KL was recovered by filtration after adjusting the pH of the black liquor to below 2.0 using a concentrated HCl solution. This precipitate was repeatedly washed with fluent deionized water and later dried at 60 °C in an oven for 2 weeks. pMDI as a coupling agent with NCO content of 30.0–32.0% was obtained from Kumho Mitsui Chemicals Co. (Seoul, Korea).

KL was mixed with ε-caprolactone (ε-CL) using a weight ratio of 80/20 (KL/ε-CL). The mixture was extruded at 150 °C with a screw rotation speed of 50 rpm using a twin-screw extruder (BA-11, Bautek Co., Pocheon, Korea) using an L/D ratio of 40/1 for the screw. The extrusion process was repeated thrice to prepare plasticized KL (PKL).

2.3. Preparation of KL or PKL/PLA Composites

KL and PKL were premixed with PLA pellets using weight ratios of 10/90, 20/80, and 30/70 (KL or PKL/PLA) and maintained in a vacuum dryer at 40 °C. To investigate the effect of a coupling agent, pMDIs of 1 and 3 phr, based on the total weight of KL or PKL/PLA mixtures, were added. Afterwards, KL or PKL/PLA composites were prepared using twin-screw extrusion at 180 °C, with a screw rotation speed of 50 rpm.

First, the composites were hot-pressed at 180 °C for 1 min to form the sheets. Afterwards, the specimens were cut with a Type V sample cutter (KP-M2060, KIPAE E&T, Co., Ltd., Suwon, Korea) as described by the American Society for Testing and Materials D638 standard. Subsequently, they were maintained in a thermo-hygrostat at a relative humidity of 65% to remove the effects of relative humidity on the tensile properties. Tensile tests were conducted using a universal testing machine (H50K, Hounsfield Test Equipment, Redhill, UK) at a cross-head speed of 10 mm/min. A minimum of ten specimens of each sample were tested and the average values were reported.

To investigate changes in the molecular structure of the coupling agent, FTIR analysis was conducted at the Central Laboratory of Kangwon National University using a Fourier transform infrared spectrophotometer (Frontier, PerkinElmer Inc., Daejeon, Korea) equipped with an attenuated total reflectance attachment. A total of 32 scans were run per sample in the range of 4000–500 cm−1.

TGA of the composites was performed using a thermogravimetric analyzer (Q2000, TA instruments Inc., New Castle, DE, USA) at the Central Laboratory of Kangwon National University. The samples (15–20 mg) were heated on a platinum pan under a nitrogen atmosphere. The range of scanning temperatures was 25–500 °C, with a heating rate of 10 °C/min. Derivative thermogravimetry (DTG) was performed by measuring mass loss with respect to temperature.

The composites were hot-pressed at 180 °C for sheet formation and cut into rectangular shapes with dimensions of 30 mm × 0.5–0.6 mm × 30 mm (width × thickness × length). The specimens were dried at 60 °C in a vacuum dryer until the weight became constant and were then immersed in a water bath at 30 °C. The changes in weight were measured periodically using a balance, with a precision of 1 mg, until the moisture contents attained the equilibrium (. The values of moisture content against the immersion time () were calculated using Equation (1), i.e., where is the initial weight of the dried sample and is the sample weight against the immersion time in the water bath.
The diffusion coefficient (D) of the water into the composites was determined by Fick’s second law. For one-dimensional diffusions from the sheets, Equation (2) was used, i.e., where l is the thickness of the composite sheet and t is the immersion time.
Equation (2) was applied to determine the diffusion coefficient for the long term (D2), where > 0.6. The diffusion coefficient for the short term (D1), where < 0.6, was determined using Equation (3), i.e.,

The effects of lignin plasticization and pMDI addition on the morphological characteristics, tensile properties, melt flowability, and thermal and water resistance properties of KL or PKL/PLA composites have been investigated in this study. KL or PKL/PLA composites were found to have rougher fractured surfaces with increasing KL and PKL contents; however, pMDI addition increased the compatibility between KL or PKL and PLA, resulting in a smoother fracture surface. An increase in compatibility between the polymers was also seen in the tensile properties of the composites. Deterioration in the tensile strength occurred in KL or PKL/PLA composites as the KL and PKL contents increased. However, the tensile strength was improved to some extent, since the urethane linkage formed from pMDI enhanced the interfacial adhesion between KL or PKL and PLA. Moreover, the influence of pMDI addition in improving the tensile strength in the PKL/PLA composites was found to be better than that for the KL/PLA composites. This was because the well-dispersed PKL in the PLA matrix might have increased the possibility of forming a urethane linkage. The existence of KL and PKL in the composites decreased the thermal degradation rate against the temperature and increased the char residues. As KL or PKL contents increased, the values of maximum water absorption in the composites were found to increase. KL or PKL/PLA samples were observed to have lower water diffusion coefficients for the short term and long term. These results will be useful as fundamental information when applying lignin to bioplastics.

This research was supported by the Basic Science Research Program through the National Research Foundation of Korea (NRF), funded by the Ministry of Education (no. 2018R1A6A1A03025582) and by the National Institute of Forest Science (FP0400-2018-01) grant. 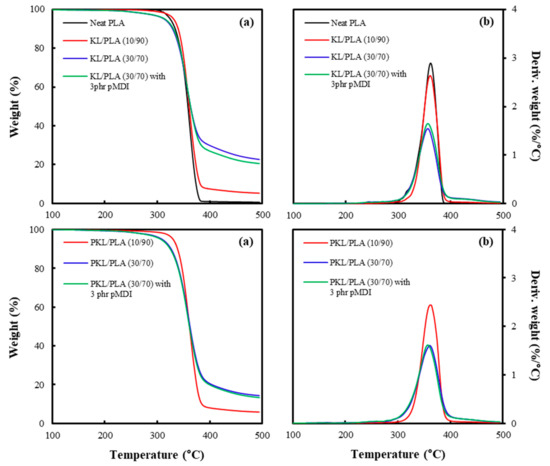 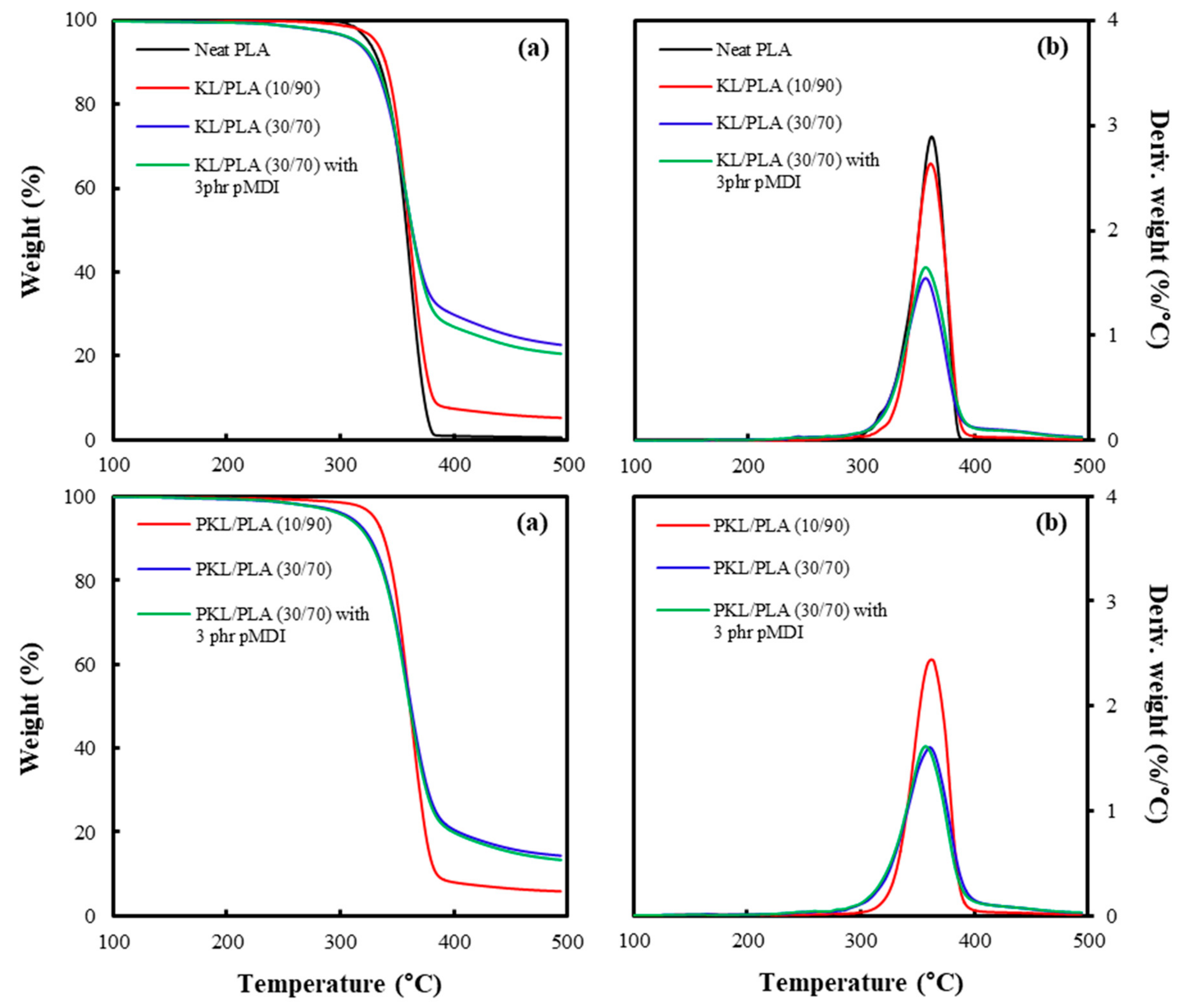 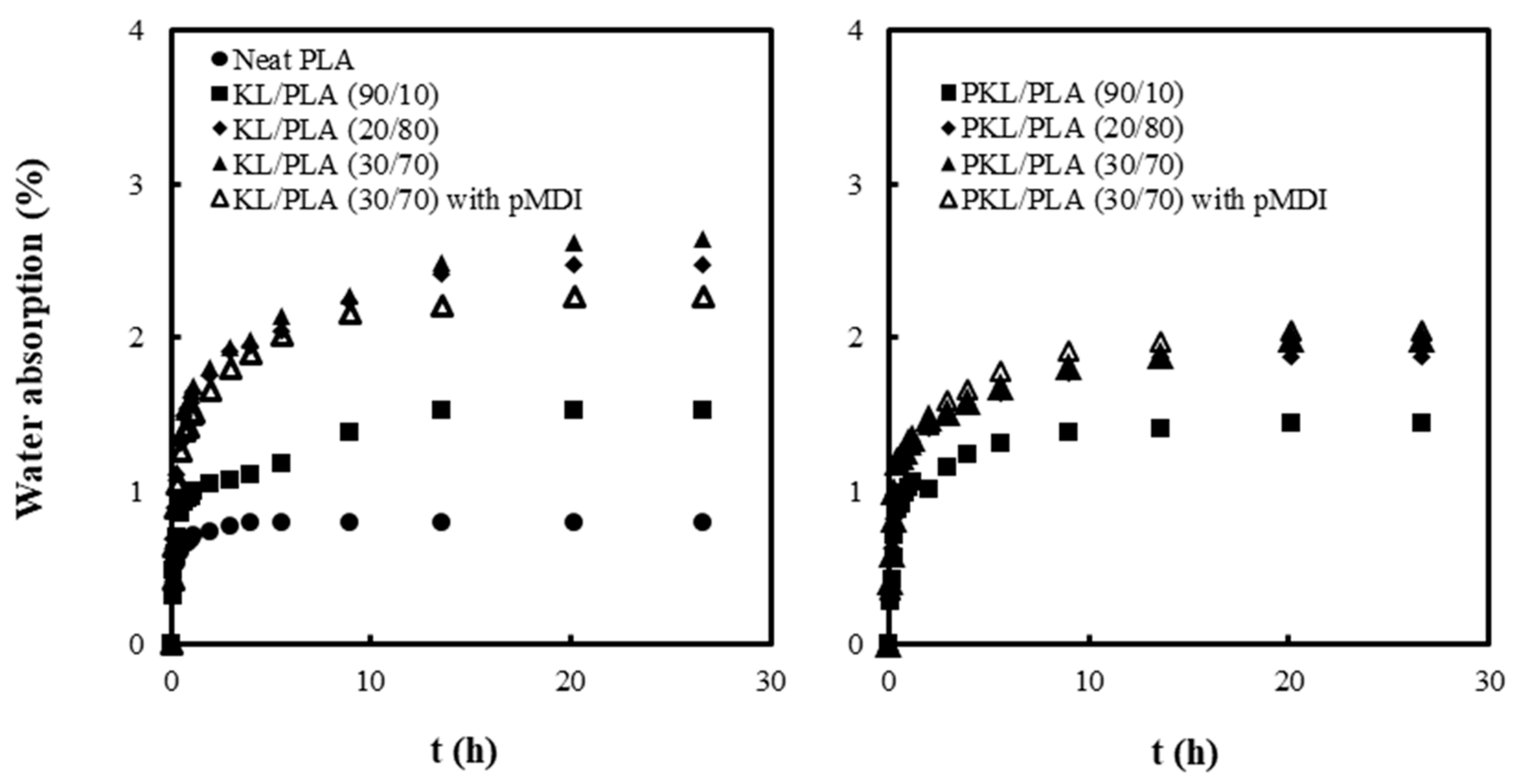 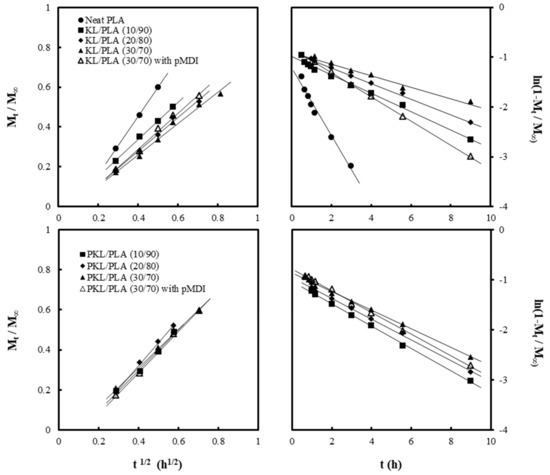