Cellulose in Ionic Liquids and Alkaline Solutions: Advances in the Mechanisms of Biopolymer Dissolution and Regeneration
Previous Article in Journal

Cellulose nanocrystals (CNC) were obtained from macauba and gravata fibers. Macauba (or Bocaiuva) is a palm tree found throughout most of Brazil and Gravata is an abundant kind of bromelia with 1–2m long leaves, found in Brazilian Pantanal and Cerrado. The raw fibers of both fibers were mercerized with NaOH solutions and bleached; they were then submitted to acid hydrolysis using H2SO4 at 45 °C, varying the hydrolysis time from 15 up to 75 min. The fibers were analyzed by X-ray diffraction (XRD), FTIR Spectroscopy, scanning electron microscopy (SEM) and thermal stability by thermogravimetric analysis (TG). XRD patterns did not present changes in the crystal structure of cellulose after mercerization, but it was observed a decrease of hemicellulose and lignin contents, and consequently an increase of cellulose content with the increase of NaOH solution concentration in the mercerization. After acid hydrolysis, the cellulose nanocrystals (CNC) were also analyzed by transmission electron microscopy (TEM) which showed an acicular or rod-like aspect and nanometric dimensions of CNC from both fibers, but the higher values of aspect ratio (L/D) were found on CNC obtained from gravata after 45 min of acid hydrolysis. The mercerization and subsequent bleaching of fibers influenced the crystallinity index and thermal stability of the resulting CNC, but their properties are mainly influenced by the hydrolysis time, i. e., there is an increase in crystallinity and thermal stability up to 45 min of hydrolysis, after this time, both properties decrease, probably due to the cellulose degradation by the sulfuric acid. View Full-Text
Keywords: cellulose nanocrystals; pantanal fibers; gravata; macauba; characterization cellulose nanocrystals; pantanal fibers; gravata; macauba; characterization
►▼ Show Figures 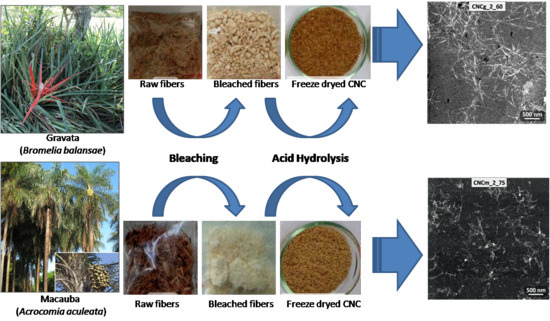