:
Electrospinning is a well-known technology used to create nanofiber mats from diverse polymers and other materials. Due to their large surface-to-volume ratio, such nanofiber mats are often applied as air or water filters. Especially the latter, however, have to be mechanically highly stable, which is challenging for common nanofiber mats. One of the approaches to overcome this problem is gluing them on top of more rigid objects, integrating them in composites, or reinforcing them using other technologies to avoid damage due to the water pressure. Here, we suggest another solution. While direct 3D printing with the fused deposition modeling (FDM) technique on macroscopic textile fabrics has been under examination by several research groups for years, here we report on direct FDM printing on nanofiber mats for the first time. We show that by choosing the proper height of the printing nozzle above the nanofiber mat, printing is possible for raw polyacrylonitrile (PAN) nanofiber mats, as well as for stabilized and even more brittle carbonized material. Under these conditions, the adhesion between both parts of the composite is high enough to prevent the nanofiber mat from being peeled off the 3D printed polymer. Abrasion tests emphasize the significantly increased mechanical properties, while contact angle examinations reveal a hydrophilicity between the original values of the electrospun and the 3D printed materials.
Keywords:
nanofiber mat; electrospinning; water filter; 3D printing; FDM printing; adhesion; stabilization; carbonization

Electrospinning can be used to create continuous nanofibers or nanofiber mats, typically with diameters in the range of tens to hundreds of nanometers [1,2,3]. In needle-based technology, a polymer solution or melt is pressed out of a syringe through a fine needle and stretched in a strong electric field, building a so-called Taylor cone while being drawn to a substrate [4]. Needleless technologies often apply rotating cylinders or wires, which are constantly coated with polymer melt or solution [5].
Due to their large surface space, such nanofiber mats are often used in applications that necessitate a large contact area of the material with the environment, such as catalyzers [6], medical wound dressing [7,8,9], biotechnological applications [10,11,12], or novel filter materials [13,14,15,16,17,18].
These fine nanofiber mats with typical areal weights of a few grams per square meter or even less, however, are mechanically not very stable [19], making an additional stabilization necessary in many cases. This is of special relevance in the case of electrospun water or oil filters [20]. Diverse approaches have been reported in the literature to solve this problem, such as heat pressing [14,21], ultrasonic welding of several nanofiber mats [22], coating the nanofiber mats [23], laminating the nanofiber mats [24], crosslinking of neighboring fibers [25], or embedding the nanofiber mats into textile composites [26].
Additive manufacturing technologies have many applications, both in the aerospace, automotive, and prototyping industries. At present, however, many research works focus on the study of mechanical properties and the dimensional accuracy of manufactured models [27,28,29]. Here, we report on a novel approach to combine both of the aforementioned technologies, using 3D printing on nanofiber mats to increase their mechanical stability.
Generally, 3D printing by fused deposition modeling (FDM) on macroscopic textile fabrics is under investigation in many research groups, aiming at increasing the adhesion between both parts of the composite by mechanical, thermal, or chemical methods [30,31,32,33,34,35,36,37,38]. Direct 3D printing on electrospun nanofiber mats prepared with different equipment, however, has, to the best of our knowledge, not yet been reported in the scientific literature. Reports of combinations of both technologies by electrospinning on 3D printed objects [39,40,41], on objects for which 3D printed negative forms were created [42], or by creating 3D printing inks from electrospun nanofibers [43], have been recently published. Only one report on a special self-built machine, created to produce alternatingly 3D-printed and electrospun layers by a needle-based method, can be found in the scientific literature [44]. Our results reported here go without such specialized equipment, but evaluate 3D printing by a common FDM printer on needleless electrospun nanofiber mats.

For electrospinning, the needleless electrospinning machine “Nanospider Lab” (Elmarco Ltd., Liberec, Czech Republic) was used by applying the following spinning parameters: high voltage 50–80 kV, nozzle diameter 0.8–0.9 mm, carriage speed 100 mm/s, bottom electrode/substrate distance 240 mm, ground electrode/substrate distance 50 mm, temperature in the chamber 22–23 °C, and relative humidity in the chamber 32–33%. As substrates, either a polypropylene nonwoven or an aluminum foil was used. On the latter, PAN nanofibers mats adhere strongly [45], allowing one to use the aluminum foil as a relatively rigid substrate during 3D printing. Spinning was carried out for 10 min (on aluminum), 20 min (in case of 70 kV), or 30 min (in case of 50 kV) to create sufficiently thick nanofiber mats.
The spinning solution was prepared from 16% polyacrylonitrile (PAN) dissolved in dimethyl sulphoxide (DMSO, min. 99.9%, purchased from S3 Chemicals, Bad Oeynhausen, Germany). PAN was used for this proof-of-concept, since it can be electrospun from the low-toxic DMSO [46] and has been investigated in detail during stabilization and carbonization before [47].
Some nanofiber mats were stabilized in a muffle furnace B150 (Nabertherm, Lilienthal, Germany), at a typical stabilization temperature of 280 °C approached with a heating rate of 1 K/min, followed by isothermal treatment at this temperature for 1 h. Carbonization was performed in a furnace (Carbolite Gero, Neuhausen, Germany) at a temperature of 500 °C, reached with a heating rate of 10 K/min in a nitrogen flow of 150 mL/min (STP) and isothermal treatment at this temperature for 1 h.
On these nanofiber mats, 3D printing was performed using the FDM printer Orcabot XXL (Prodim, The Netherlands) with a nozzle diameter of 0.4 mm, using a layer thickness of 0.2 mm, a nozzle temperature of 190 °C to 210 °C, and different printing bed temperatures between room temperature and 80 °C. The polymer material was poly(lactic acid) (PLA) (purchased from Filamentworld, Neu-Ulm, Germany). A sketch of this process is presented in Figure 1.
For the optical and chemical evaluation of the composites, we used a digital microscope VHX-600D (Keyence, Neu-Isenburg, Germany), a confocal laser scanning microscope (CLSM) VK-8710 (Keyence), and an Excalibur 3100 (Varian, Inc., USA) FTIR spectrometer.
Contact angles were investigated by placing drops of distilled water with a volume of 15 µL onto the samples under examination, taking microscopic images with the aforementioned digital microscope and fitting the angles between the drop contour and the baseline between object and drop.
The abrasion resistance of the nanofiber mats on the 3D printed polymer surface was investigated by a Martindale abrasion tester, working according to ISO 12947, and evaluating the damage on the surface by eye, as defined in the standard, as well as with the aforementioned digital microscope.

To conclude, we have successfully tested the possibility to prepare composites by 3D printing on raw, stabilized, or carbonized PAN nanofiber mats, thus mechanically stabilizing the nanofiber mats. Optical and chemical examinations revealed that the nanofiber mats were not measurably modified by the 3D printing process. Contact angle examinations did not show significant differences in hydrophilicity, comparing the pure nanofiber mat and the composite surface. Martindale abrasion tests underlined the significantly increased abrasion resistance of the composite.
While in this first proof-of-principle, a full layer was 3D printed on the nanofiber mats, as the composites could be used in filter applications with the liquid flow parallel to them, future experiments have to be conducted to investigate the possibility to print open mesh-like structures on nanofiber mats to also enable utilization in filters through which the liquid flows.

This research was funded by the DAAD, funding program number 57440917 – Research Grant and by the Erasmus+ program of the European Union. The APC is funded by the Open Access Publication Fund of Bielefeld University of Applied Sciences and the Deutsche Forschungsgemeinschaft (DFG, German Research Foundation) – 414001623. 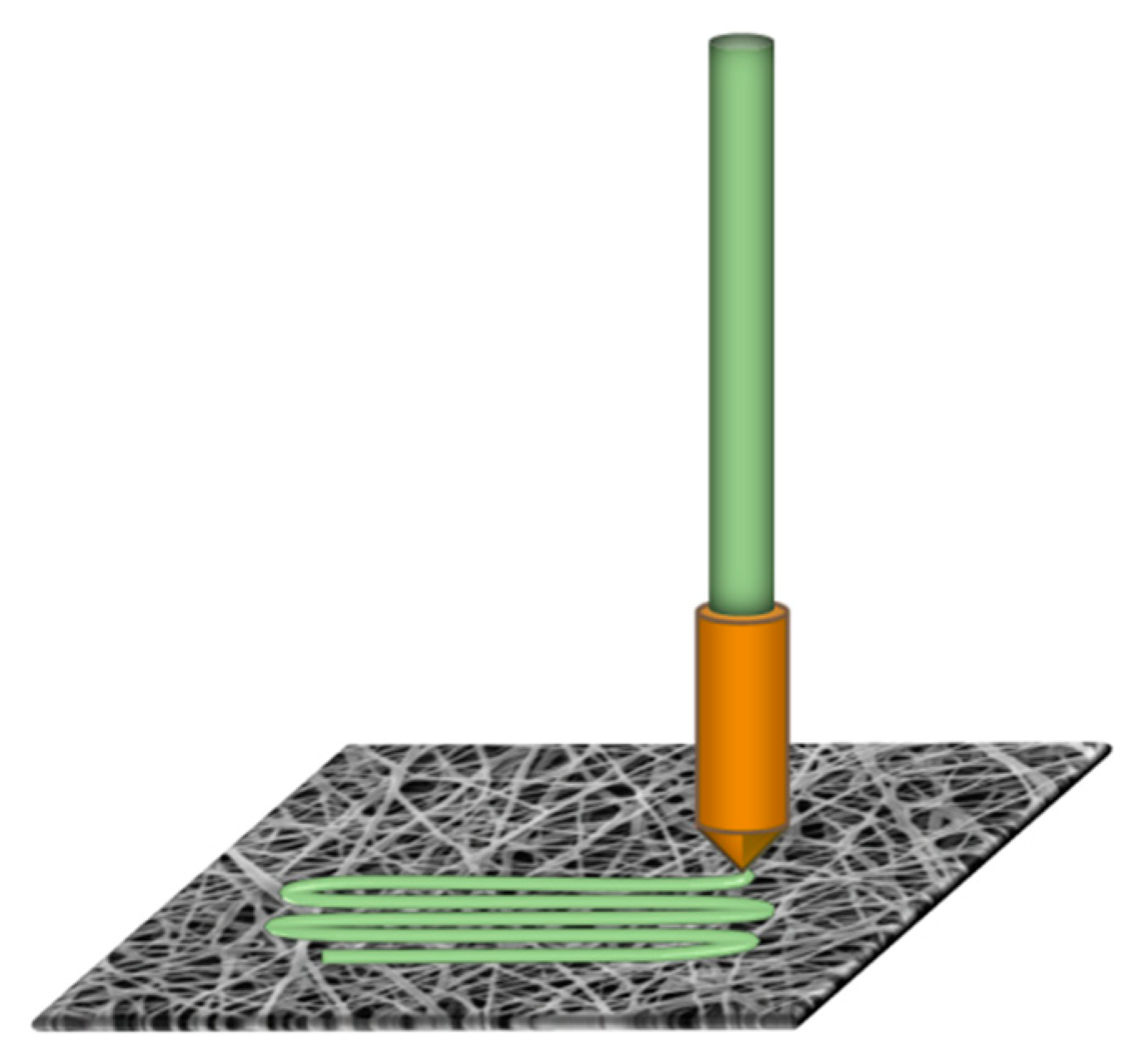 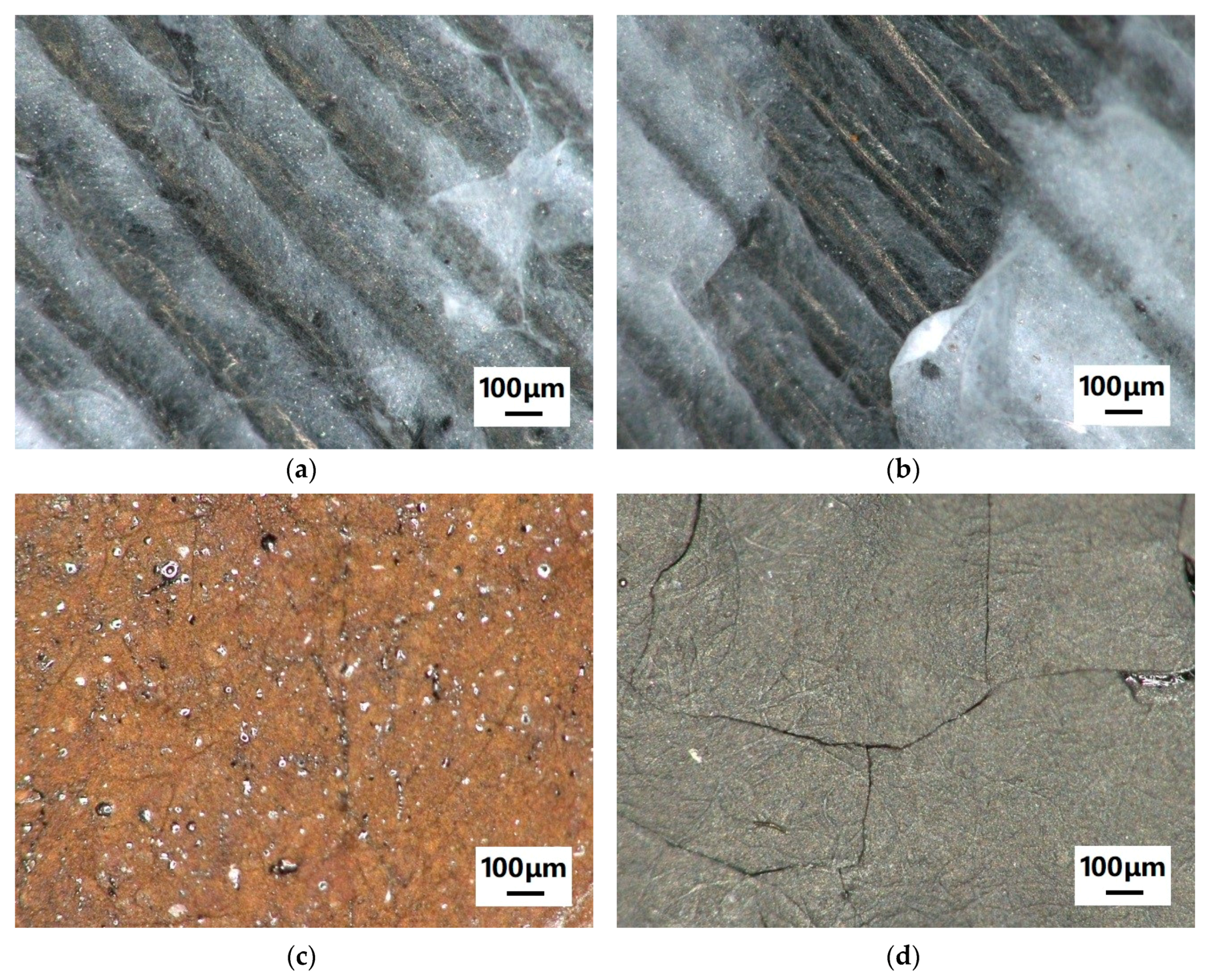