Ziyang green tea was considered a medicine food homology plant to improve chronic fatigue Ssyndrome (CFS) in China. The aim of this research was to study the therapeutic effect of selenium-polysaccharides (Se-TP) from Ziyang green tea on CFS and explore its metabolic mechanism. A CFS-rats model was established in the present research and Se-TP was administrated to evaluate the therapeutic effect on CFS. Some serum metabolites including blood urea nitrogen (BUN), blood lactate acid (BLA), corticosterone (CORT), and aldosterone (ALD) were checked. Urine metabolites were analyzed via gas chromatography-mass spectrometry (GC-MS). Multivariate statistical analysis was also used to check the data. The results selected biomarkers that were entered into the MetPA database to analyze their corresponding metabolic pathways. The results demonstrated that Se-TP markedly improved the level of BUN and CORT in CFS rats. A total of eight differential metabolites were detected in GC-MS analysis, which were benzoic acid, itaconic acid, glutaric acid, 4-acetamidobutyric acid, creatine, 2-hydroxy-3-isopropylbutanedioic acid, l-dopa, and 21-hydroxypregnenolone. These differential metabolites were entered into the MetPA database to search for the corresponding metabolic pathways and three related metabolic pathways were screened out. The first pathway was steroid hormone biosynthesis. The second was tyrosine metabolism, and the third was arginine-proline metabolism. The 21-hydroxypregnenolone level of rats in the CFS group markedly increased after the Se-TP administration. In conclusion, Se-TP treatments on CFS rats improved their condition. Its metabolic mechanism was closely related to that which regulates the steroid hormone biosynthesis. View Full-Text
Keywords: polysaccharide; chronic fatigue syndrome; metabonomics polysaccharide; chronic fatigue syndrome; metabonomics
►▼ Show Figures 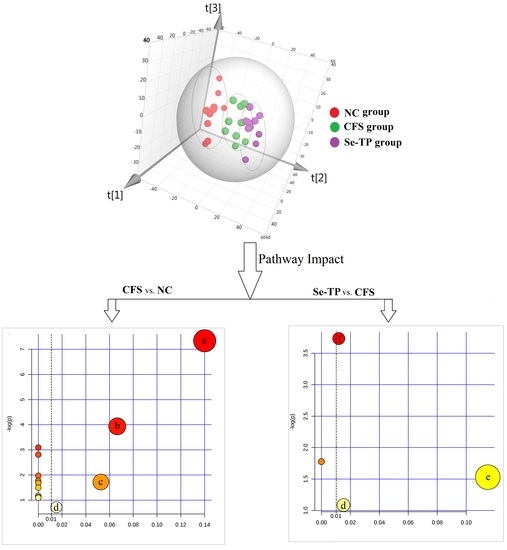