Many enzymes require pyridoxal 5’-phosphate (PLP) as an essential cofactor and share active site residues in mediating diverse enzymatic reactions. Methionine can be converted into cysteine by cystathionine γ-lyases (CGLs) through a transsulfuration reaction dependent on PLP. In bacteria, MccB, also known as YhrB, exhibits CGL activity that cleaves the C–S bond of cystathionine at the γ position. In this study, we determined the crystal structure of MccB from Staphylococcus aureus in its apo- and PLP-bound forms. The structures of MccB exhibited similar molecular arrangements to those of MetC-mediating β-elimination with the same substrate and further illustrated PLP-induced structural changes in MccB. A structural comparison to MetC revealed a longer distance between the N-1 atom of the pyridine ring of PLP and the Oδ atom of the Asp residue, as well as a wider and more flexible active site environment in MccB. We also found a hydrogen bond network in Ser-water-Ser-Glu near the Schiff base nitrogen atom of the PLP molecule and propose the Ser-water-Ser-Glu motif as a general base for the γ-elimination process. Our study suggests the molecular mechanism for how homologous enzymes that use PLP as a cofactor catalyze different reactions with the same active site residues. View Full-Text
Keywords: cystathionine γ-lyases; cysteine biosynthesis; Staphylococcus aureus; pyridoxal 5’-phosphate (PLP) cystathionine γ-lyases; cysteine biosynthesis; Staphylococcus aureus; pyridoxal 5’-phosphate (PLP)
►▼ Show Figures 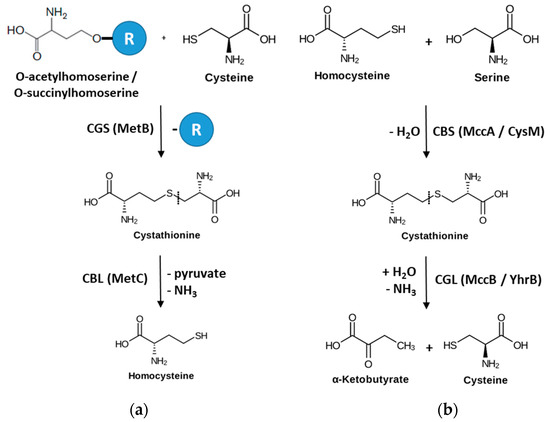