The propagation of both surface and flexural acoustic plate modes along y-rotated x-propagation GaPO4 piezoelectric substrates was studied for several y-cut angles: the phase velocity and coupling coefficient dispersion curves were theoretically calculated for two different electroacoustic coupling configurations. The investigation of the acoustic field profile across the plate thickness revealed the presence of thin plate modes having polarization predominantly oriented along the propagation direction, and hence suitable for operation in liquid environment. These modes include the linearly polarized Anisimkin Jr. and the quasi longitudinal plate modes, AMs and QLs, showing a phase velocity close to that of the longitudinal bulk acoustic wave propagating in the same direction. The temperature coefficient of delay (TCD) of these longitudinal modes was investigated in the −20 to 420 °C temperature range, in order to identify thermally stable or low TCD cuts. The power flow angle, i.e., the angle between the phase and group velocity vectors, was also estimated to evaluate the substrate anisotropy effect on the acoustic wave propagation. The GaPO4 intrinsic properties, such as its resistance to high temperature and its chemical inertness, make it especially attractive for the development of acoustic waves-based sensors for applications in harsh liquid environment. View Full-Text
Keywords: GaPO4; Anisimkin Jr. modes; quasi longitudinal modes; piezoelectricity GaPO4; Anisimkin Jr. modes; quasi longitudinal modes; piezoelectricity
►▼ Show Figures 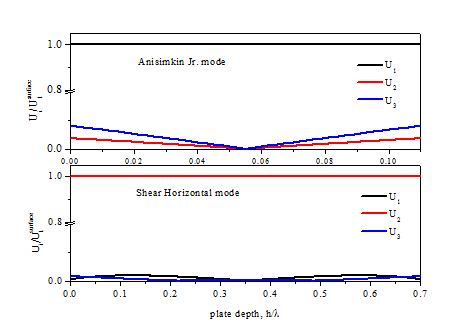