Over the last decades, duplex stainless steels (DSS) have progressively been used in certain industrial areas instead of traditional austenitic stainless steels for the last decades due to their excellent mechanical properties and corrosion resistance, in spite of their relatively high cost. In these industrial sectors, often highly corrosive gases and fluids are stored and transported, e.g., marine, paper, pulp, chemical, nuclear, and petrochemical industries. DSS have much higher strength and higher PREN (Pitting Resistance Equivalent Number, Super DSSs have PREN > 40) than traditional austenitic stainless steels. Their increasing usage is supported by their low cost/lifetime rate [1,2].
Their favorable characteristics are realized by a particular microstructure which is composed of austenitic and ferritic phases having near the same volume ratio (50–50%). As a consequence of the nearly same amount of these phases this type of duplex steels have got improved corrosion resistance and enhanced toughness, ductility and weldability. The favorable fraction of austenitic and ferritic phases is regulated by appropriate addition of different alloying elements (e.g., Cr, Ni, Mo, and N), while the carbon content is in the range of 0.02–0.03%. Because of the high quantity of alloying elements, components made from DSS can be exposed to various mechanical and environmental effects during their lifetime what can induce different types of deterioration processes. When a component’s temperature is between 300 and 1000 °C it can induce the precipitation of different deleterious secondary phases (e.g., α’/alpha prime, σ/sigma, and χ/chi phases) [3,4,5].
Formation of the α’-phase is resulted by the spinodal decomposition of the ferritic phase into Fe-rich (or Cr-depleted) α-ferrite and Cr-rich α’-phase (also called alpha prime), what takes place between 300 and 525 °C and causes the so called “475 °C embrittlement”. During this spinodal decomposition zones with different Cr-concentrations are formed by uphill diffusion. The spinodal decomposition of the ferritic phase increases hardness because stress fields are formed between Cr-rich α’ and Fe-rich α zones and are increasing with aging time what hinder the movement of dislocations [6].The σ-phase forms during a eutectoid-type decomposition of the ferritic phase (δ) into secondary austenite (γ2) and σ-phase according to the next equation: δ→γ2 + σ between 650–1000 °C after some isothermal annealing [7,8,9].
The presence of these secondary phases can lead to premature deterioration of DSS components in two different ways. On the one hand, these are hard and brittle precipitations which have a damaging effect on ductility and toughness of duplex steels. On the other hand, they have usually relatively high concentration of Cr and/or Mo, decrease the concentration of these elements in the adjacent grains resulting the reduction of corrosion resistance [10,11,12,13,14].
As a matter of fact, in cases of traditional stainless steels and some grades of DSSs (e.g., lean DSSs) diffusionless formation of strain-induced martensite (SIM) should be considered due to the high rate of cold working. SIM can be formed from metastable austenite according to the next equations: γ→ε, γ→α’ or γ→ε→α’, where ε is a paramagnetic HCP (hexagonal closed packed) phase and α’ is a ferromagnetic BCC (body centered cubic) phase. However, it seems that highly alloyed DSSs, including 2507 grades, are not prone to formation of SIM, because they have more stable austenite to prevent its formation [15]. In our case, it will be revealed. Hereafter, the letter α’ denotes usually the Cr-rich α’-phase.
In this paper, the effects of cold working on thermally induced deterioration processes of duplex stainless steels and their activation energies are studied through differential thermal analysis (DTA) measurements in the range of 100 to 1000 °C. Articles can be found in the literature which deal with the decomposition of ferritic phase in austenitic or duplex stainless steels and their hot deformability, but they use different kinds of steels with pre-treatments and testing methods (see them in Section 3.6 and Section 4). However, no studies can be found in which the effects of cold working on the phase transformations of duplex stainless steels are studied using DTA. DTA seems to be capable to indicate phase transformations at different temperatures and consequently to quantify their activation energies from the Kissinger plot.
Another purpose and novelty of our work was to investigate the applicability of DTA on the phase transformations of duplex stainless steels. Calculating their activation energies by the Kissinger plot offer numerical and comparable results to judge this.

The experimental material was a commercially available SAF 2507 type duplex stainless steel (other standards apart from SAF 2507: UNS S32750, EN Number 1.4410). The nominal composition of this steel is given in Table 1. A micrograph of the microstructure of the untreated sample can be seen on Figure 1. For this study a sample made of this type of steel was cold rolled up to 60% deformation, then a piece of it was investigated using DTA. Later on, two pieces of it were isothermally heat treated at different temperatures (500 and 800 °C) for 20 min in order to form different phases.
DTA investigations were carried out by a Setaram Setsys 16/18 device to find phase transformations and determine their activation energies. Samples were heated up from 100 to 1000 °C with different heating rates (5, 10, and 20 °C/min) in argon atmosphere, then they were cooled at a constant 40 °C/min cooling rate.
For optical metallography, the specimens were ground and mechanically polished, and after they were etched by Murakami’s and Beraha II etchant. Murakami’s etchant contains 150 mL distilled water (H2O), 30 g potassium hydroxide (KOH), and 30 g potassium ferricyanide (K3[Fe(CN)6]). Samples were kept in 90–95 °C Murakami’s solution for 15–20 s.
Beraha II etchant contains 85 mL distilled water (H2O), 15 mL hydrochloric acid (HCl) with a concentration of 37.5%, and 1 g potassium metabisulfite (K2S2O5). Samples were kept in room temperature Beraha II solution for 30–45 s.
X-ray diffraction (XRD) measurements were performed on a Rigaku SmartLab diffractometer in the Bragg–Brentano geometry with a 1D D/Tex detector. Diffractograms were evaluated with the PDXL2 program using the ICDD-2018 database.
Hardness measurement is one of the most commonly used method to detect changes in mechanical properties of metals or alloys. Any changes of the mechanical properties or the microstructure that are not resulted by the modifying chemical composition can be revealed by hardness measurement. For these investigations a Vickers indentation hardness tester was applied. The tests were performed on the polished surfaces of the specimens by a Buehler 1105 micro-hardness tester. The applied force was 4.905 N (500 gF, HV 0.5) for macro, and 0.491 N (50 gF, HV0.05) for micro hardness tests.

Results of DTA measurements on the cold rolled sample are shown in Figure 2. Two reactions can be identified by them. One exothermic reaction was revealed at the temperature ~500 °C. An endothermic reaction occurred at the temperature ~800 °C. Since these peak temperatures can be found in the formation temperature ranges of the α’- and σ-phases therefore, it has been supposed that the exothermic peak on the DTA curve indicates the α’-phase formation or recrystallization, while the second peak refer the σ-phase formation.
In order to identify the phase transformations occurred at each DTA-peaks, further studies were performed. Therefore, pieces of the 60% cold worked specimen were isothermally heat treated at 500 and 800 °C, respectively, for 20 min to induce recrystallization or α’-, as well as σ-phase precipitations, then they were cooled in water. These transformations were examined by optical metallography, macro and micro hardness tests, feritscope measurements, and XRD.

After etching, different phases in the samples can be identified. Beraha II reagent colorizes only the ferritic phase because on its surface a thin sulfide layer forms, which causes interference. Therefore, the austenitic phase remains bright. Murakami’s etchant was applied near its boiling point to reveal the ferritic and σ-phases (austenitic grains also seem to be grey), however, ferritic grains become a light reddish brown and σ-phase grains become deep reddish brown [16]. Optical micrographs can be seen in Figure 3.
In Figure 3, details “a” and “b” show micrographs of the untreated sample with nearly equal (50–50%) ratio between ferrite and austenite. In the main phases of the sample cold worked at 60% then heat treated at 500°C (Figure 3c,d) tiny black spots can be seen what seem to be other secondary phases. These spots were revealed stronger by Murakami’s than Beraha II reagent. In the sample cold worked at 60% then heat treated at 800 °C (Figure 3e,f) ferritic phase was bitten unevenly, while the σ-phase was done evenly by Murakami’s reagent. These phases appear in similar colors. In this sample, the eutectoid-type decomposition of the ferritic phase into secondary austenite can be seen very well by etching Beraha II reagent.

Ferrite contents of the specimens were determined by a Fischer FMP30 type feritscope. Feritscopes are useful tools for fast and non-destructive measurement of ferrite content based on magnetic induction. The samples contain significant amount of both paramagnetic (such as austenite, σ-phase) and ferromagnetic (ferrite) phases [17,18]. Due to the cold working and heat treatment (decomposition of the ferritic phase) their proportions can change. Figure 4 shows the results of the feritscope measurements. These results reveal that ferrite content decreased only in the specimen heat treated at 800 °C, what is caused by the decomposition of the ferritic phase into austenitic and σ-phases. The amount of the ferromagnetic phase did not increase due to cold working, therefore SIM was not formed (at least for the BCC ferromagnetic α’-phase).

As the XRD results (Figure 6) reveal, the specimens cold worked and heat treated at 500 °C contain only ferritic and austenitic phases. However, it should be noted that XRD cannot distinguish ferritic and α’-phases, because they have the same crystalline structures, with very similar lattice parameter [2]. It should also be noted that heat treating at 500°C did not result in any more new phases but the intensity ratio of the peaks has changed. The intensity ratio of the 220 peak was increased most probably as a result of a weak 220 texture formation. As a consequence, this can influence the growth in the hardness of austenite in the sample heat treated at 500 °C.
In order to evaluate the intensity fraction of the different phases, the background was first subtracted, and then the areas under the diffraction peaks of the different phases were summarized in the diffraction angle range of 30°–100° (Table 2). The changing in intensity fractions shows the changing in phase content. XRD results also reveal that the sample heat treated at 800 °C contains significant amount of σ-phase beside the ferritic and austenitic phases. The proportion of the ferritic phase is similar to the results of feritscope measurements. It can be seen that formation of the HCP SIM (ε-) phase was not detected.

The research reported in this paper was supported by the BME Nanotechnology and Materials Science TKP2020 IE grant (BME IE-NAT TKP2020), by the BME NC TKP2020 grant, OTKA grant number K 124926 funded by National Research, Development and Innovation Office—NKFIH. This research was also supported by the JánosBolyai Research Scholarship of the Hungarian Academy of Sciences, grant number: BO/00821/20/6 and BO/00292/19/11. This work was partially completed in the ELTE Institutional Excellence Program (1783-3/2018/FEKUTSRAT) supported by the Hungarian Ministry of Human Capacities.

The authors express their thanks to András Éva, Miklós Prodán for their useful remarks, and to Nikolett Pálfi BSc student for her work in laboratory. 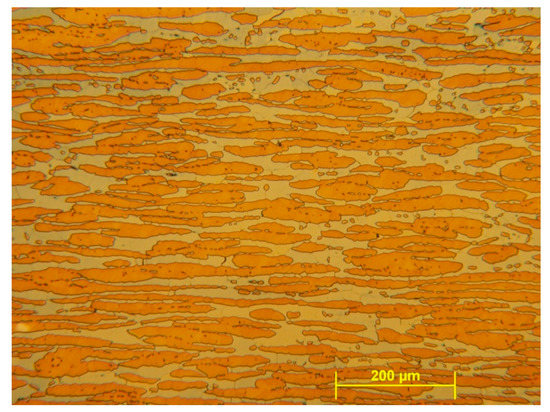 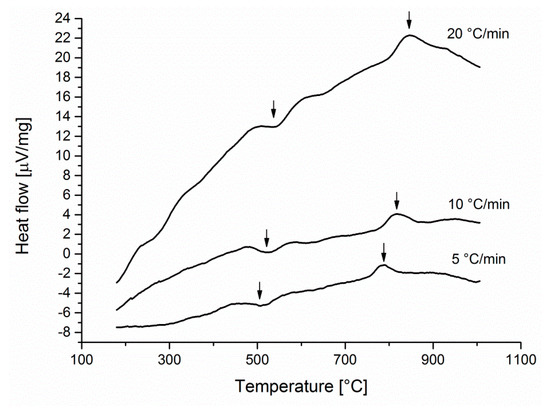 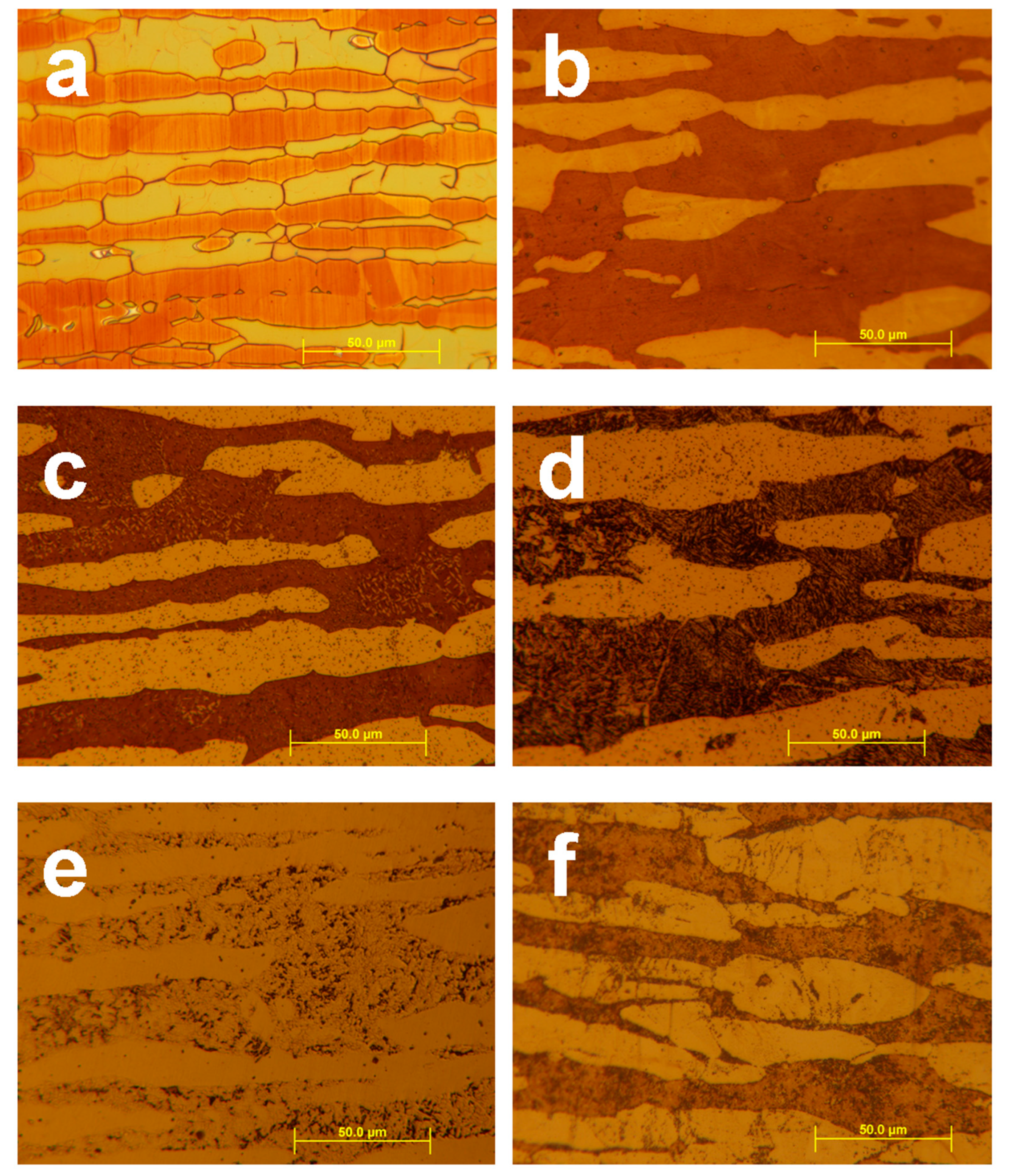 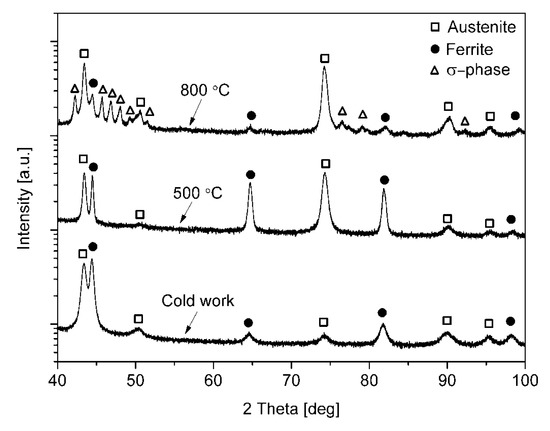