:
A numerical scheme was developed to compute the thermal and stress fields of the Czochralski process in a quasi-time dependent mode. The growth velocity was computed from the geometrical changes in melt and crystal due to pulling for every stage, for which the thermal and stress fields were computed by using the open source software Elmer. The method was applied to the Czochralski growth of Ge crystals by inductive heating. From a series of growth experiments, we chose one as a reference to check the validity of the scheme with respect to this Czochralski process. A good agreement both for the shapes of the melt/crystal interface at various time steps and the change in power consumption with process time was observed.
Keywords:
global simulation; Czochralski; germanium

In contrast to silicon, it is still a challenge to grow germanium crystals without dislocations. In specific cases, it is even not wanted to grow dislocation free, but to keep the dislocation density in a certain range. This applies for Ge used in radiation detectors, where the Ge crystal is grown in hydrogen atmosphere and not in argon because of purity reasons. In dislocation-free crystals, a hydrogen double vacancy complex will be formed with hydrogen, which leads eventually to the degradation of the detector [1]. Dislocation multiplication is driven by thermal stresses, and thus, tuning the thermal field in the crystal is of severe importance. In the case of Czochralski growth with resistance heating, numerical results have been presented by Artemyev et al. using the software package CGsim (http://str-soft.com/products/CGSim/) and compared with experimental results  [2]. In the case of inductive heating, which is required to grow Ge crystals for detectors, the tuning of the thermal field is much more challenging. Experimental work has been done by Wang et al. [3]. However, no calculations have been made for these growth experiments. A global simulation for the Czochralski growth of Ge with induction heating was performed by Honarmandnia et al. [4]. However, only the temperature field including the interface shape was computed for three distinctive growth stages. Later, they also considered thermal stress, but for a configuration with a resistance heater [5].
In order to obtain information on dislocation density development, it is essential to simulate the entire growth process. This can be done in one run solving the time dependent heat transport equation. This approach is, e.g., realized in CGsim, but with some restrictions on the gas phase attached to the moving parts such as the crystal and melt. Furthermore, the grid is adapted in the parts of changing geometry by condensing and expanding the nodes, leading to a very dense mesh in the shrinking melt volume and a very coarse mesh in the growing crystal. Other approaches include a recalculation of the mesh in the relevant regions during the run as, e.g., that of Sabanski et al. [6]. In this paper, we present an approach with different runs for every stage of the process. The crystal shape is preset either by the shape obtained in the experiment or an artificial one. Thus, the three phase junction (melt/gas/crystal) is defined by input, but the melt/crystal interface is calculated. We developed a script for an automatic setup of geometry and meshing for each growth stage. The calculation of the thermal and stress fields using the open source software Elmer (https://www.csc.fi/web/elmer) is started from a script. The shape of the crystal was given previously. In this paper, we use the shapes obtained by the growth experiments to compare experimental and numerical results. However, any artificial shape can be given as an input for the computation.

For the Czochralski growth of high purity Ge single crystals, a growth furnace was constructed at IKZ. Details were described elsewhere [7]. A sketch for the axisymmetric calculation is presented in Figure 1. The current setup with a quartz crucible of a 90 mm inner diameter was used to grow 2 crystals. The only graphite part in the setup was the susceptor holding the crucible. Heat was generated in the graphite part by inductive heating using a coil with 9 windings made of silver. A frequency of 80 kHz was applied. Crystals were pulled with a constant pulling velocity of , except when the bottom cone was grown to empty the crucible. The position of the crucible was fixed during the entire process of crystal growth. As a result, the melt level was decreasing in time, resulting in a higher growth velocity of the crystal than the pulling velocity. The rotation rates of the crystal and crucible were 15 rpm and −2 rpm, respectively (counter rotation). The radius of the crystal was controlled by adapting the heating power. This was done manually. In the finishing process, the Ge melt was pulled out completely.
Two kinds of material analyses are relevant in this paper: lateral photovoltaic scanning (LPS) measurements to obtain information on the interface shape during crystal growth [8] and etch pit density (EPD) measurements. Therefore, the crystals were cut orthogonal to the crystal growth direction for counting EPD and parallel for LPS. For EPD analysis, the polished wafers were etched to reveal the dislocations. The etch pit density was determined by manually counting the pits using a light microscope. For better comparability, all wafers were analyzed at the same positions (middle, half radius, edge) along a and a direction. A typical LPS setup was shown in [9,10]. Here, a modulated and focused laser beam exited electrons and holes, which drifted/diffused inside the sample. If a resulting doping inhomogeneity existed in the area of electron/hole movement, a potential difference would be detectable between the ohmic rim contacts by using a lock-in-technique. In the case of high charge carrier lifetime and a resulting large mean free path of charge carriers, LPS measurements are quite challenging, because the information of the local resistivity gradient is smeared out. This makes the LPS measurements for high purity Ge extremely difficult. In addition, the high intrinsic charge carrier density at room temperature sets a barrier to the measurability. In order to measure differences in local resistivity, the charge carrier concentration had to be larger than the intrinsic charge carrier density. In the current setup, the intrinsic charge carrier density was about (at 300 K) [11], which corresponded to a resistivity of . The resistivity of the crystal investigated in this paper was just below this critical value ().

We developed a quasi-transient approach to compute the Czochralski growth of high purity Ge using the open source software Elmer. The approach was validated by a reference experiment. The key point was the comparison of the interface shape during the growth. For this reason, lateral photoscanning (LPS) measurements were performed at vertical cuts through the crystal. A good agreement between LPS measurements and numerical results was observed. We showed that it was essential to compute the local growth velocity instead of using the constant pulling velocity. Furthermore, the change in power with process time was in good agreement between the measured one in the experiment and the calculated one in the numerical calculations.
Employing the temperature field and the von Mises stress, we obtained a first guess for the evolution of the dislocation densities. The tendency from this approach with respect to the growth process and process time was the same as observed by the etch pit densities measured on three wafers of a crystal. A complete calculation of dislocation densities applying the Alexander–Haasen model requires a much more advanced numerical approach, which is a project for the future.

This research was funded by Federal Ministry of Education and Research (BMBF) grant number 05A2017.

Part of this work was funded by the Federal Ministry of Education and Research (BMBF) within the Collaborative Research Project (05A2017). We would like to thank F. M. Kießling for his continuous support of the GERDA project. 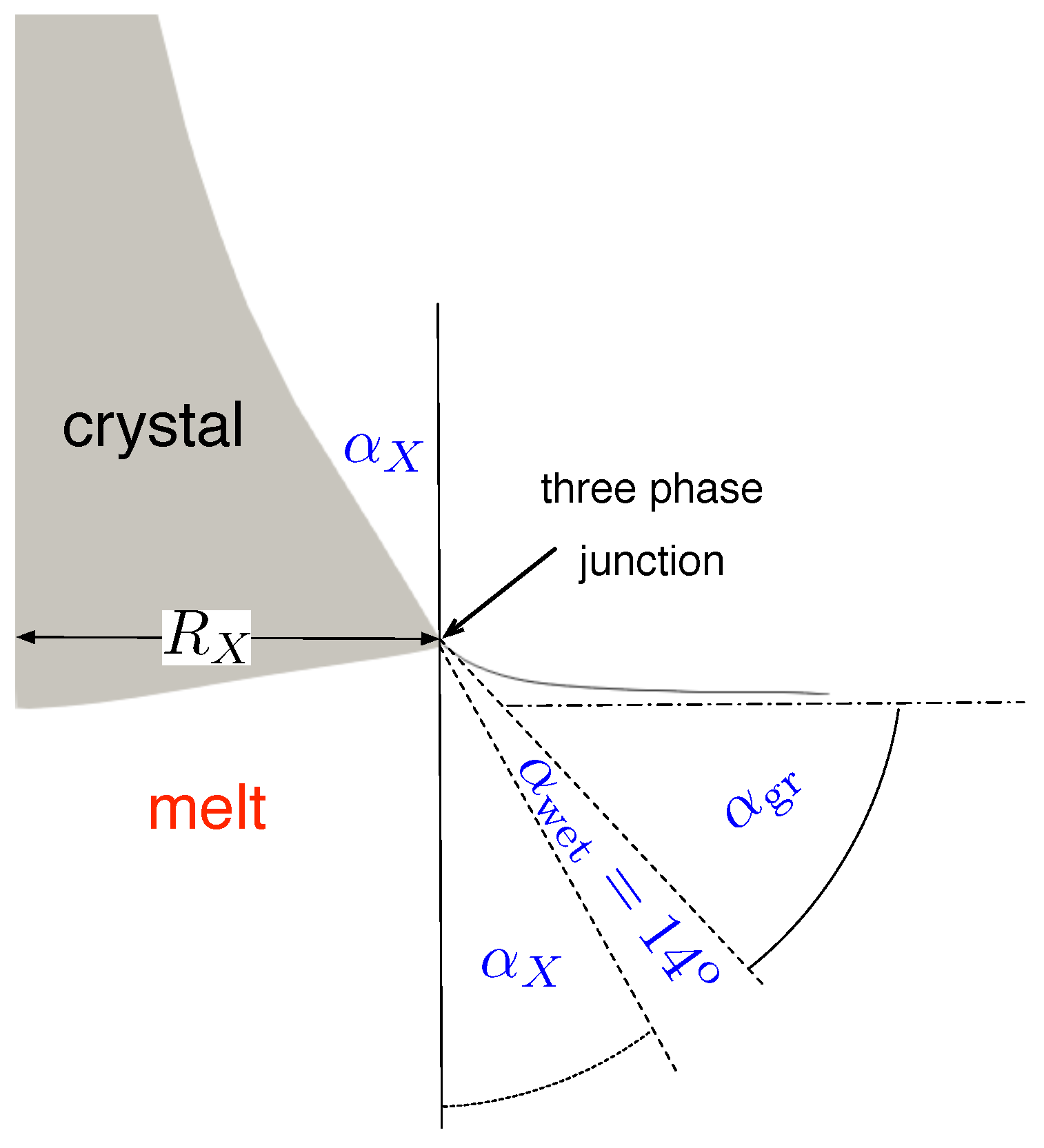 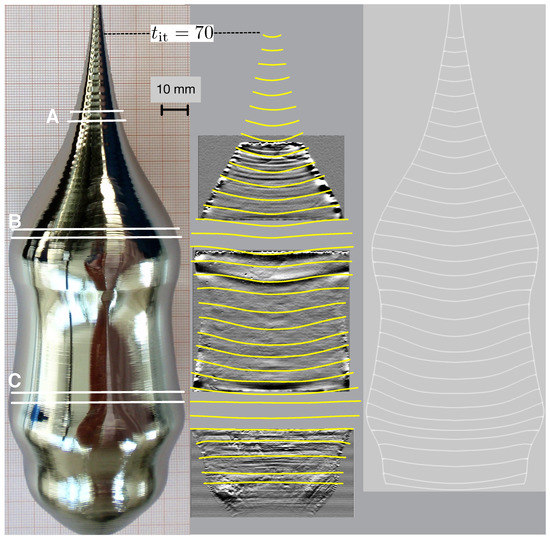 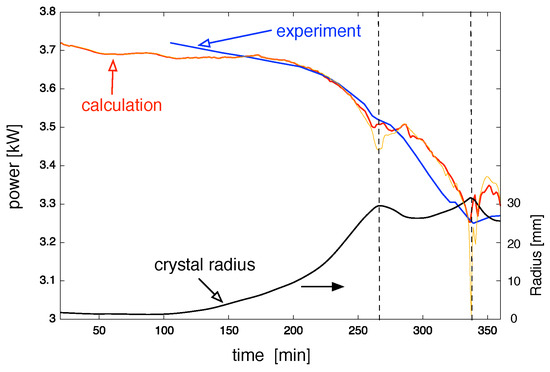 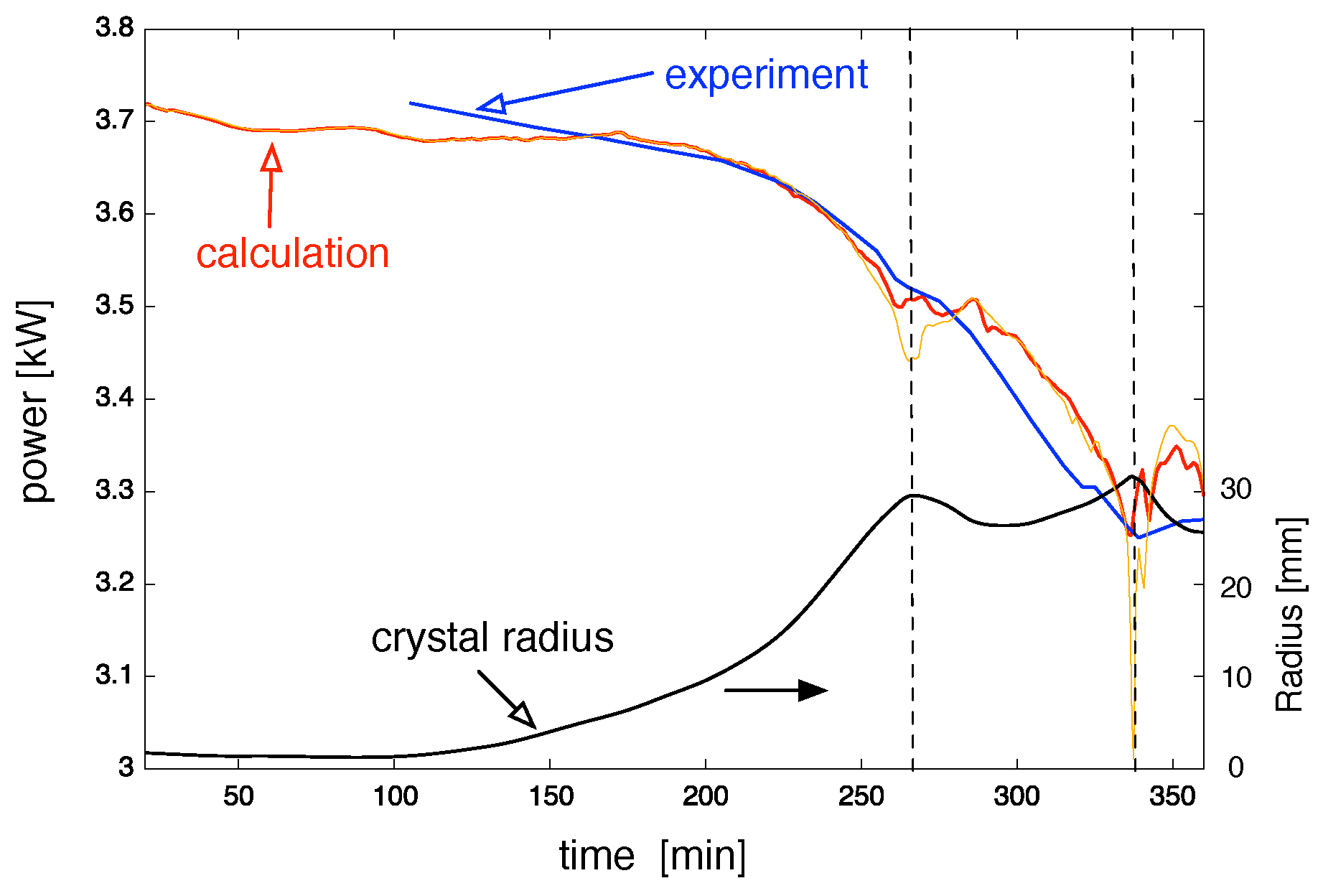 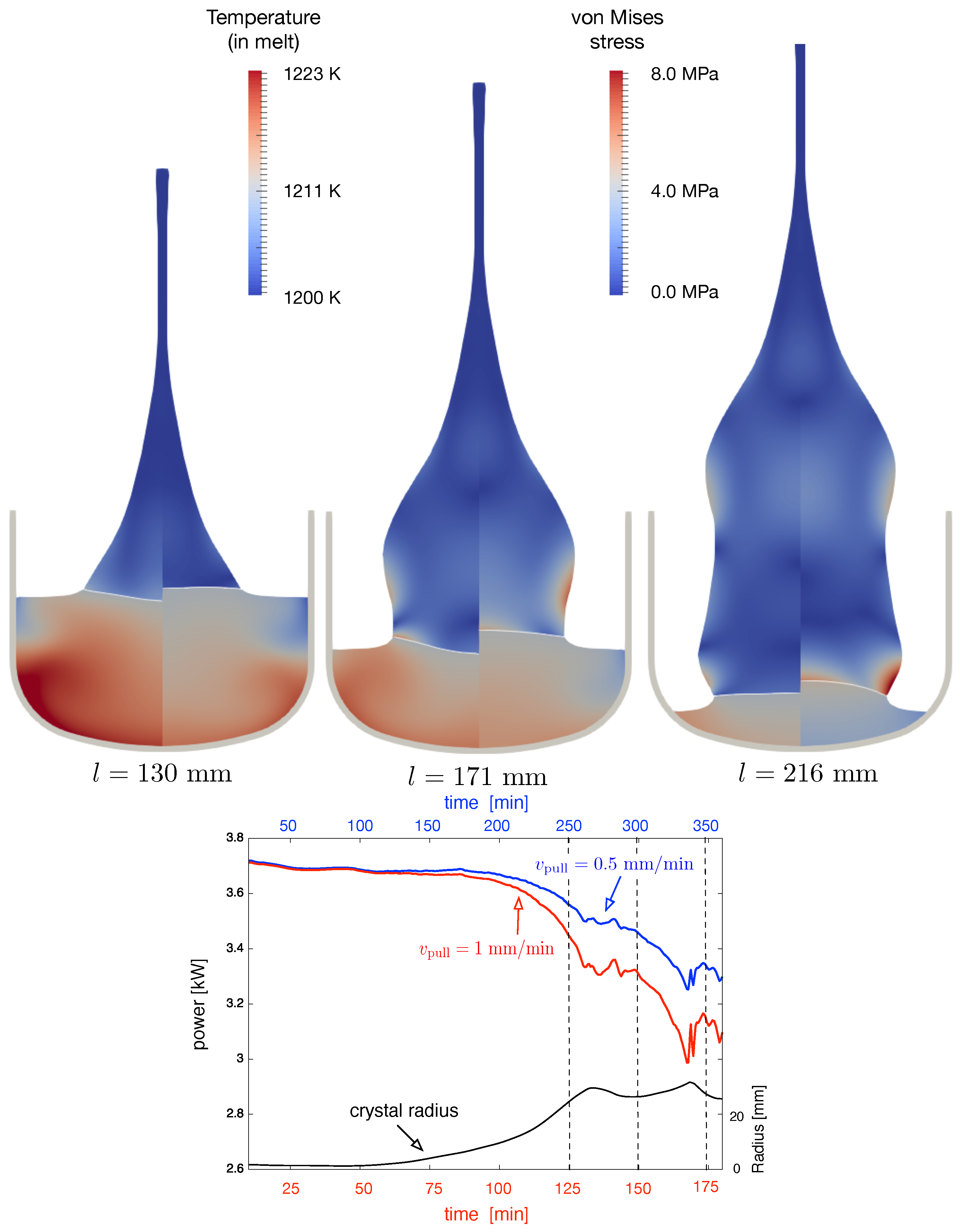 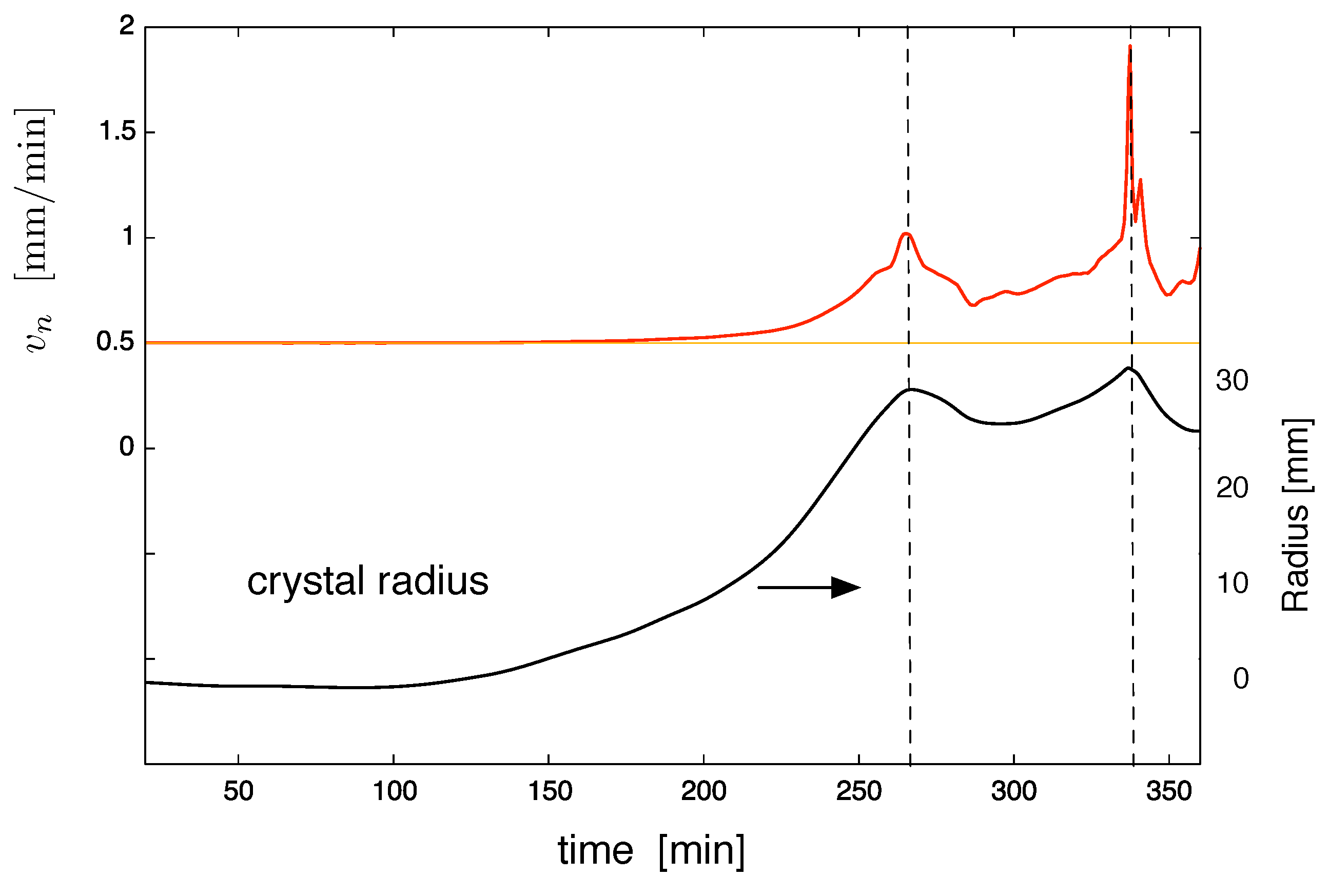 Table 2. Physical properties of furnace materials.
Table 2. Physical properties of furnace materials.
Values of EK98300 K. Data from the data sheets of Heraeus.
© 2019 by the authors. Licensee MDPI, Basel, Switzerland. This article is an open access article distributed under the terms and conditions of the Creative Commons Attribution (CC BY) license (http://creativecommons.org/licenses/by/4.0/).
We use cookies on our website to ensure you get the best experience. Read more about our cookies here.
Accept
We have just recently launched a new version of our website. Help us to further improve by taking part in this short 5 minute survey here. here.
Never show this again