Pseudokinases: From Allosteric Regulation of Catalytic Domains and the Formation of Macromolecular Assemblies to Emerging Drug Targets

Pseudokinases are a member of the kinase superfamily that lack one or more of the canonical residues required for catalysis. Protein pseudokinases are widely distributed across species and are present in proteins that perform a great diversity of roles in the cell. They represent approximately 10% to 40% of the kinome of a multicellular organism. In the human, the pseudokinase subfamily consists of approximately 60 unique proteins. Despite their lack of one or more of the amino acid residues typically required for the productive interaction with ATP and metal ions, which is essential for the phosphorylation of specific substrates, pseudokinases are important functional molecules that can act as dynamic scaffolds, competitors, or modulators of protein–protein interactions. Indeed, pseudokinase misfunctions occur in diverse diseases and represent a new therapeutic window for the development of innovative therapeutic approaches. In this contribution, we describe the structural features of pseudokinases that are used as the basis of their classification; analyse the interactome space of human pseudokinases and discuss their potential as suitable drug targets for the treatment of various diseases, including metabolic, neurological, autoimmune, and cell proliferation disorders. View Full-Text
Keywords: pseudokinases; signal transduction; cancer therapy; tyrosine/serine/threonine phosphorylation; new drug targets; interactome pseudokinases; signal transduction; cancer therapy; tyrosine/serine/threonine phosphorylation; new drug targets; interactome
►▼ Show Figures 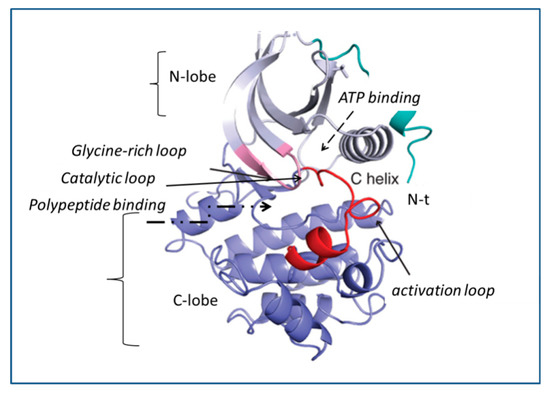