The Promoting Effect of Ni on Glycerol Hydrogenolysis to 1,2-Propanediol with In Situ Hydrogen from Methanol Steam Reforming Using a Cu/ZnO/Al2O3 Catalyst
Previous Article in Journal

Hydrotreated Vegetable Oil as a Fuel from Waste Materials

:
Biofuels have become an integral part of everyday life in modern society. Bioethanol and fatty acid methyl esters are a common part of both the production of gasoline and diesel fuels. Also, pressure on replacing fossil fuels with bio-components is constantly growing. Waste vegetable fats can replace biodiesel. Hydrotreated vegetable oil (HVO) seems to be a better alternative. This fuel has a higher oxidation stability for storage purposes, a lower temperature of loss of filterability for the winter time, a lower boiling point for cold starts, and more. Viscosity, density, cold filter plugging point of fuel blend, and flash point have been measured to confirm that a fuel from HVO is so close to a fuel standard that it is possible to use it in engines without modification. The objective of this article is to show the properties of different fuels with and without HVO admixtures and to prove the suitability of using HVO compared to FAME. HVO can also be prepared from waste materials, and no major modifications of existing refinery facilities are required. No technology in either investment or engine adaptation of fuel oils is needed in fuel processing.
Keywords:
biofuel; biodiesel; hydrotreating; hydrocarbon; waste

The experiment shows that the hydrotreatment process is an alternative to the production of biofuels for the esterification process to eliminate the undesirable effects, as described in [16] and [28]. These include, in particular, increased NOx content, emissions, fuel storage problems, engine oil wear, and so on. HVO are also characterized by high cetane numbers, as confirmed by the measured results [16]. The characteristics for diesel compared to HVO were practically the same, as illustrated by Sugiyama [17]. Experiments and proven measurements show that HVO impurities have a positive effect on the characteristics of diesel engines.
Characteristics to be monitored include, above all, the lubricity to provide the lubricating ability of the moving parts of the fuel system and the cetane number. The graphs show, in accordance with [28], that the recommended HVO ratio (addition) should be about 50% in order to be consistent with the diesel fuel characteristics.
According to Šimáček et al. [29], low density and low sulfur content have an effect on lower lubricity, which can be improved by the application of conventional lubricating additives as is the case with today’s low-grade mineral diesel fuel. The kinematic viscosity of all HVO mixtures meets the standard parameters. The distillation curve determines that, by addition of HVO to mineral diesel fuel, its process is flattened. According to Hönig et al. [23], this has a positive effect on the reduction of carbon deposits and exhaust emissions. The HVO Manual [27] indicates CFPP up to −40 °C. This value has not been confirmed by its own measurement. The lowest measured CFPP was −36 °C in 100% HVO. This is even 11 °C less than that found in Aatola et al. [16]. Even with this mismatch, all blends have a positive effect on the CFPP drop and are well below the F-class for diesel fuels, the CFPP reported by EN 590 max −20 °C. Results of the flash point measurement have an increasing tendency, which corresponds to all other articles, the measured values were compared with. This has a positive effect on reducing the risk of a fuel explosion during handling and storage under standard conditions. The measured high values of the cetane number and the calculated cetane index value increase with the HVO content in the mineral oil mixture. The values of the cetane number and cetane index set out in this work correspond to the already high values of these figures in Aatola et al. [16], Šimáček et al. [29], Hönig et al. [30], Váchová and Vozka [31], and the HVO guidelines [27].
The properties of hydrotreated oils are much more similar to high quality sulfur-free diesel or synthetic GTL diesel fuel than to FAME.
In the production of fuels, components with n-hydrocarbons and branched hydrocarbons are suitably combined to achieve suitable fuel properties (cetane number, pour point). Biodiesel produced by the hydrotreating of vegetable oil consists mainly of C17 and C18 n-hydrocarbons with a high cetane number but with poor low temperature properties due to the melting point between 20 and 28 °C. Improvement of these parameters can be achieved by adding a second proportion of highly isomeric hydrocarbons into the fuel blend.
During long-term storage, pure hydrotreated oils as well as mixtures containing them, behave like traditional diesel fuels. Hydrotreated oils do not contain any hazardous impurities, such as saturated monoglycerides present in FAME. There is therefore no risk of clotting above the cloud point. However, as with standard diesel, this phenomenon may occur due to the presence of paraffins in the fossil fuel or hydrotreated oil during long-term storage at temperatures below the cloud point.

The sample of tested hydrotreated vegetable oil was received from the Neste Oil Company (Espoo, Finland). Simultaneously, diesel fuel free of fatty acid methyl esters compliant with EN 590 and a FAME mixture compliant with EN 14 214 were used for laboratory tests.
The following tests of blends were carried out:
The following samples and their mixtures were analyzed:
For the GC measurements, the samples were diluted 1/50 (20 μL sample + 980 μL hexane).
Analytical Standards:
For sample analysis, an Agilent Technologies 7890A gas chromatograph (Santa Clara, CA, USA) equipped with an autosampler, a fused-silica capillary column SPB-2560 and a flame ionization detector (FID) was used. The basic instrument parameters and GC analysis conditions are shown in Table 2.
Lubrication was measured on a PCS instrument: HFRR (high frequency reciprocating rig). The PCS instrument uses an electromagnetically vibrating moving body with low amplitude, while simultaneously compressing it against a solid body. The instrument measures the frictional forces between the bodies and the electrical contact resistance between them. Settings of the instrument are in Table 3.

Due to the pressure of the European Union to reduce the total amount of greenhouse gases released into the atmosphere, there is also a need to reduce greenhouse gas emissions in transport. One way is to increase the share of biofuels in mineral diesel over 7%.
Biodiesel from FAME is not very suitable as a higher percentage mixture because of the low oxidation stability, higher temperature of cold filter plugging point (CFPP), carbonization tendency and possible microbial contamination in the presence of water. A much better biofuel is HVO, whose hydrocarbon character can be compared to high quality mineral diesel with a very high cetane number and a very low temperature of cold filter plugging point (CFPP). As confirmed by the actual measurement, HVO does not have the above-mentioned drawbacks as fatty acid methyl esters do. HVO can be mixed into mineral diesel fuel without limitation. Its presence in mineral oil blends improves engine performance and reduces fuel consumption, exhaust emissions, and cold filter plugging point (CFPP), so it can also be used in aviation turbine engines. The properties of hydrotreated oils are much more similar to high quality sulfur-free diesel or synthetic GTL diesel fuel than to FAME.
Adding HVO can achieve a lowering of NOx and particulate matter emission, which has a positive impact on environment. This is a suitable way of accomplishing emissions below the limits of a newly introduced ban for highly-polluting, older diesel vehicles, for example in Germany. HVO has a naturally high cetane number, which is very useful for increasing lower cetane fuels, which could also be conducive to other alternative fuels for lowering emissions, as well as having sufficient fuel properties.
The production technology of this biofuel is intergenerational in its own way, as raw materials, both food and waste, can be used for its production without significantly changing the hydrotreatment conditions. It is also beneficial for this technology that it can be operated, after minor modifications, directly in existing refineries.

This work was supported by grants of the Grant Agency of Czech University of Life Sciences Prague IGA 2018: 31150/1312/3113—Analysis of the influence of biofuels on the operating parameters of combustion engines and IGA 2017: 31150/1312/3116—The Examination of the Influence of Blended Biofuels on Operating Parameters of CI Engines. 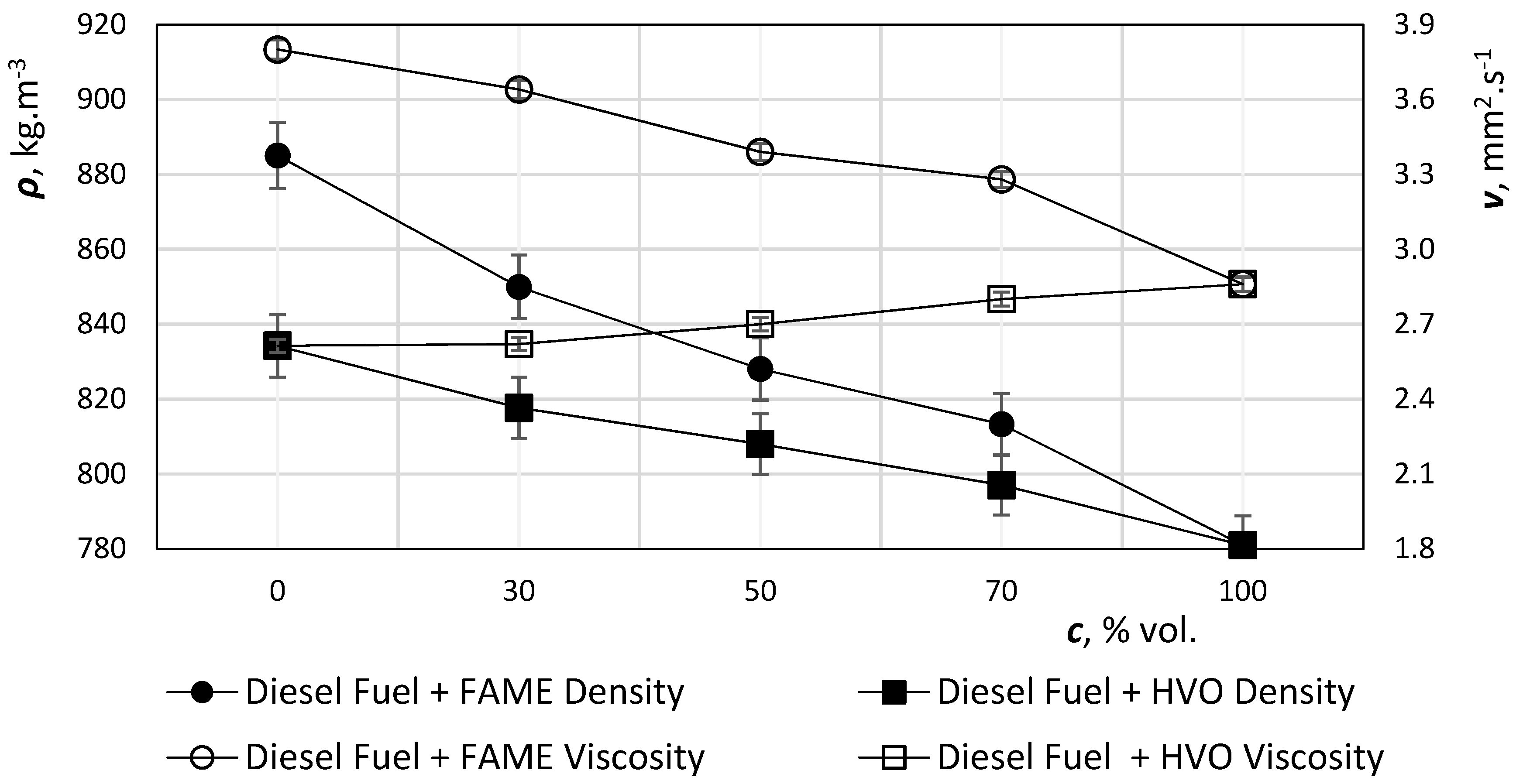 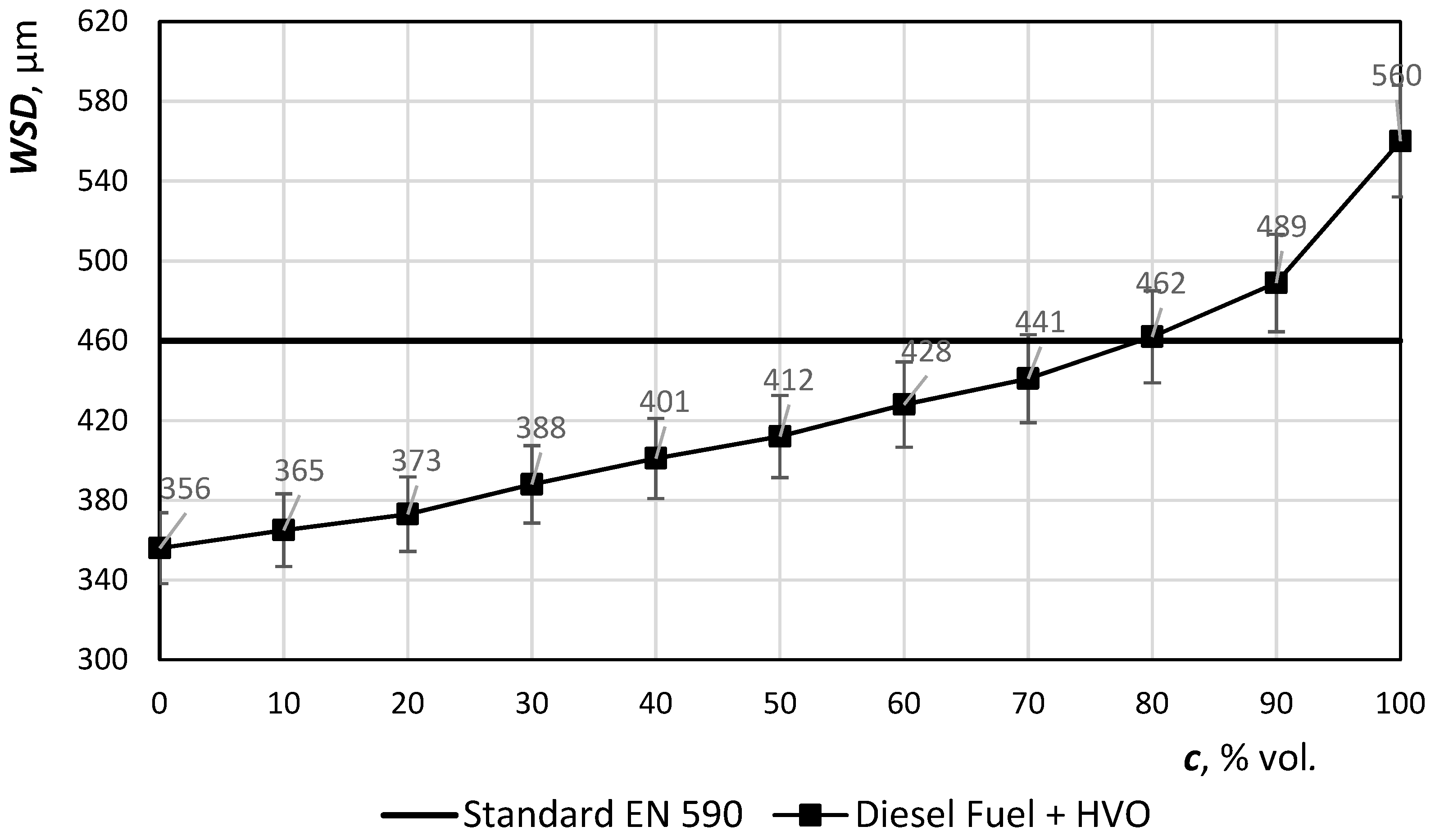