Pt represents an effective promoter of supported Ni catalysts in the transformation of tristearin to green diesel via decarbonylation/decarboxylation (deCOx), conversion increasing from 2% over 20% Ni/Al2O3 to 100% over 20% Ni-0.5% Pt/Al2O3 at 260 °C. Catalyst characterization reveals that the superior activity of Ni-Pt relative to Ni-only catalysts is not a result of Ni particle size effects or surface area differences, but rather stems from several other phenomena, including the improved reducibility of NiO when Pt is present. Indeed, the addition of a small amount of Pt to the supported Ni catalyst dramatically increases the amount of reduced surface metal sites, which are believed to be the active sites for deCOx reactions. Further, Pt addition curbs the adsorption of CO on the catalyst surface, which decreases catalyst poisoning by any CO evolved via decarbonylation, making additional active sites available for deoxygenation reactions and/or preventing catalyst coking. Specifically, Pt addition weakens the Ni-CO bond, lowering the binding strength of CO on surface Ni sites. Finally, analysis of the spent catalysts recovered from deCOx experiments confirms that the beneficial effect of Pt on catalyst performance can be partially explained by decreased coking and fouling. View Full-Text
Keywords: triglycerides; tristearin; deoxygenation; decarbonylation; decarboxylation; nickel; platinum; hydrocarbons triglycerides; tristearin; deoxygenation; decarbonylation; decarboxylation; nickel; platinum; hydrocarbons
►▼ Show Figures 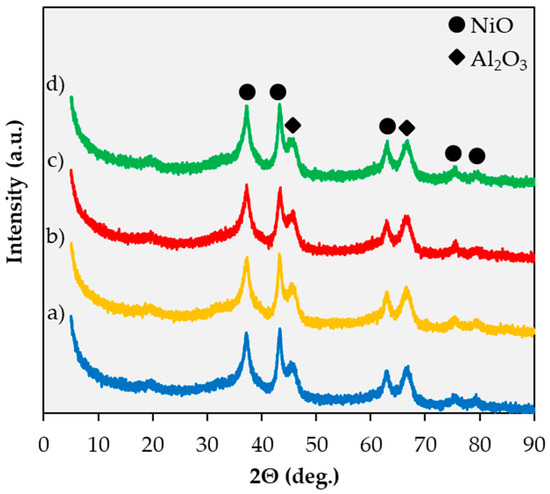