We herein describe the design and synthesis of a catalytically active peptide–gold nanoparticle conjugate (Pep-Au-NP) that binds Zn(II) within its peptide monolayer and develops carbonic anhydrase activity. Specifically, a modified variant of the β-sheet forming IHIHIQI-peptide (IHQ), which forms an interstrand 3-His Zn(II)-binding site, was used as a ligand for spherical gold nanoparticles (Au-NPs). The resulting immobilized peptide maintains its ability to form β-sheets, as determined by circular dichroism (CD)-spectroscopy and, thus, maintains its ability to form Zn(II)-binding sites. The addition of Zn(II)-ions to the peptide–gold nanoparticle conjugates ([email protected]) resulted in significant improvements in rates of ester hydrolysis of 4-nitrophenyl acetate (4-NPA) and the hydration of CO2 compared to the unconjugated peptide variants. Recycling of the catalyst revealed that [email protected] remains intact with at least 94% of its initial activity after five rounds of CO2 hydration. The herein reported results reveal that Pep-Au-NPs are able to perform reactions catalyzed by natural metalloenzymes and open up new possibilities for the implementation of these conjugates. View Full-Text
Keywords: catalytically active peptides; gold nanoparticle; carbonic anhydrase mimic; artificial enzymes; catalysis catalytically active peptides; gold nanoparticle; carbonic anhydrase mimic; artificial enzymes; catalysis
►▼ Show Figures 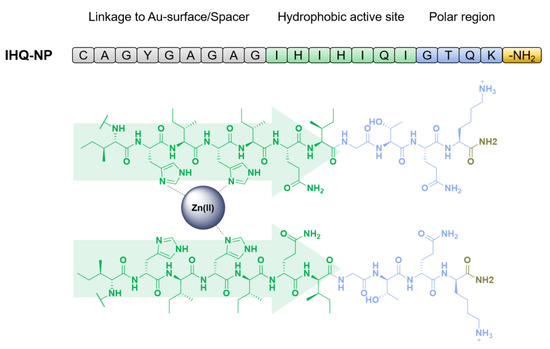