A Force Field for a Manganese-Vanadium Water Oxidation Catalyst: Redox Potentials in Solution as Showcase
Next Article in Special Issue

Thermal Inactivation of Butyrylcholinesterase in Starch and Gelatin Gels

Butyrylcholinesterase (EC 3.1.1.8) is a hydrolase enzyme catalyzing the reaction of butyrylthiocholine hydrolysis to release thiocholine and butyric acid. Butyrylcholinesterase (BChE), as well as acetylcholinesterase (AChE), has been commonly used to monitor inhibitors of cholinesterases in the air, water, and biological fluids [1,2]. These enzymes catalyze similar reactions, differing only in substrate, but, in contrast to BChE, AChE is inhibited by excess of substrate [1].
Numerous studies show high sensitivity of BChE to organophosphorus and carbamate pesticides [3,4,5]. The specific effect of these pesticides on BChE activity provided the basis for developing very effective biosensors to determine them in environmental samples or food [2,3]. Moreover, this enzyme can be used to detect nerve agents, and thus security agencies and the military take a close interest in it [6,7,8,9,10]. The sensitivity of BChE for detecting organophosphorus pesticides such as paraoxon and chlorophos is 6 and 10 times, respectively, higher than the sensitivity of AChE [3].
Analytes in environmental samples and biological fluids are usually determined using electrochemical (amperometric and potentiometric) and optical BChE-based biosensors [2,11,12,13]. There are studies reporting the use of fluorescence methods involving enzyme conjugates [14].
Despite the high sensitivity of enzyme-based analytical methods, maintaining the high activity and stability of the enzymes during storage and use, including their use as the recognition element in biosensors, still remains a challenge. Enzyme preparations can be stabilized by adding polyelectrolytes, amino acids, sugars, or nanoparticles [14,15,16,17]. To enhance the stability of enzymes further, the resulting solutions are dehydrated by evaporation or freeze drying on supports. In a study by Gibson et al., to increase the stability of glucose oxidase preparations, they were first supplemented with sucrose and then dehydrated [18]. The resulting enzyme preparations retained their catalytic activity for one month when stored at a temperature of 37 °C.
Development of BChE preparations stable in storage and use is a problem that has been addressed in numerous studies [10,19,20,21]. A study by Lonshakova-Mukina et al. [22] reported that starch and gelatin gels produced a substantial stabilizing effect on BChE activity during long-term storage. Immobilization of the enzyme preparations into those polymers increased their storage time at a temperature of 4 °C to more than two years. At the same time, there are very few available data on thermodynamic properties of the BChE immobilized in natural polymer carriers.
Most researchers analyze kinetics of thermal inactivation of proteins in aqueous solutions [15,23,24,25,26] rather than in viscous media created by high-molecular-weight materials such as starch and gelatin. Gelatin and starch gels were found to enhance temperature and pH stability of proteins such as enzymes of luminous bacteria [27,28,29]. In the presence of gelatin gel, the activity of those enzymes at different temperatures increased by a factor of two, and their optimum pH range became wider. Hence, high-molecular-weight polymers can effectively stabilize protein molecules. Previous studies of BChE stability were mainly conducted with low-molecular-weight substances such as glycerol or sucrose [16]. The novelty of the present research is the use of starch and gelatin gels to study thermal inactivation of BChE. We found that the thermal stability of BChE was enhanced in the presence of these natural polymers.

Freeze-dried BChE from equine serum 900 U/mg (Sigma, USA) was used in the study. Other reagents used were butyrylthiocholine iodide (≥99.0%) (Fluka, Sigma-Aldrich, Switzerland), 5-5′-dithiobis (2-nitrobenzoic acid) (≥98%) and starch from potato (Sigma-Aldrich, Germany), gelatin from porcine skin with medium gel strength (Fluka, Sigma, Germany). Solutions of butyrylcholinesterase, starch, and gelatin were prepared using a 0.05 M potassium-phosphate buffer, pH 8, at 25 °C.
Gelatin gel was prepared as follows. Buffer solution was added to gelatin powder, and it was left to swell for 30 min. Then, it was heated to a temperature of 80 °C while being stirred thoroughly. To prepare starch gel, the necessary amount of dry starch was added to the buffer solution; it was brought to a boil and then cooled to a temperature of 25 °C.
BChE activity was determined in the presence of different gelatin (0.4% to 3%) and starch (1% to 4.2%) concentrations and with no stabilizers (control) at a temperature of 25 °C. Thermal inactivation of BChE was studied by incubating the enzymes for 2–30 min at temperatures ranging from 50 to 64 °C in a 1.4% gelatin solution, 3% starch solution, and with no stabilizers (control). A portion of 0.05 M phosphate buffer pH 8 was used as a control solution.
BChE activity was analyzed using Ellman’s method [39]. To perform measurements, 1.8 mL of starch/gelatin suspension or buffer solution with 0.11 U BChE, 100 µL 0.02 mM 5-5′-dithiobis (2-nitrobenzoic acid), 100 µL 2 mM butyrylthiocholine iodide were sequentially added to the spectrophotometer cuvette. BChE activity was determined by measuring the absorbance of the reaction solution at a 412 nm absorption wavelength. BChE residual activity, a/a0, was determined after exposure of the enzyme to various temperatures; a0 is the starting activity of BChE, and a is the activity of BChE after heating time. Measurements were done using a Shimadzu UV-2700 spectrophotometer (Japan). Each data point was determined in at least 3–5 parallel measurements.
Activation energies Ea were determined using the Arrhenius equation:
ki = Ai × exp(−Ea/RT),
where Ai is the Arrhenius pre-exponential factor, Ea is the Arrhenius activation energies, R is the universal gas constant, T is temperature in Kelvin.
The activation enthalpy ΔH#, the activation entropy ΔS#, and the free energy of inactivation ΔG were calculated according to the Eyring equations:
ln(ki/T) = (−ΔH#/R) × (1/T) + (ΔS#/R) + ln(kB/h),
ΔG# = ΔH# − TΔS#,
where kB is Boltzmann’s constant, h is Plank’s constant.
The activation entropy ΔS# was obtained by plotting T × ln(k/T) versus T and from the temperature dependence of ΔG (3).

Using starch and gelatin gels can maintain catalytic activity of BChE exposed to elevated temperatures over long periods. Thus, there is positive evidence in favor of using these polymer gels to produce enzyme preparations that are stable in storage and use. Starch gel is, however, the better choice, as the use of this stabilizer not only increases the Arrhenius energy but also decreases entropy of activation of BChE thermal inactivation, which indicates that the rate of this process slows down.

The research was funded by the Government of Krasnoyarsk Territory, Krasnoyarsk Regional Fund of Science, and the Russian Foundation for Basic Research [project No 20-44-242001]. 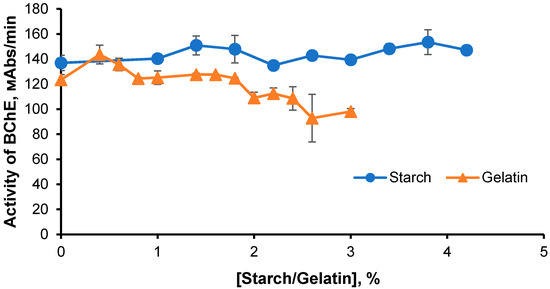 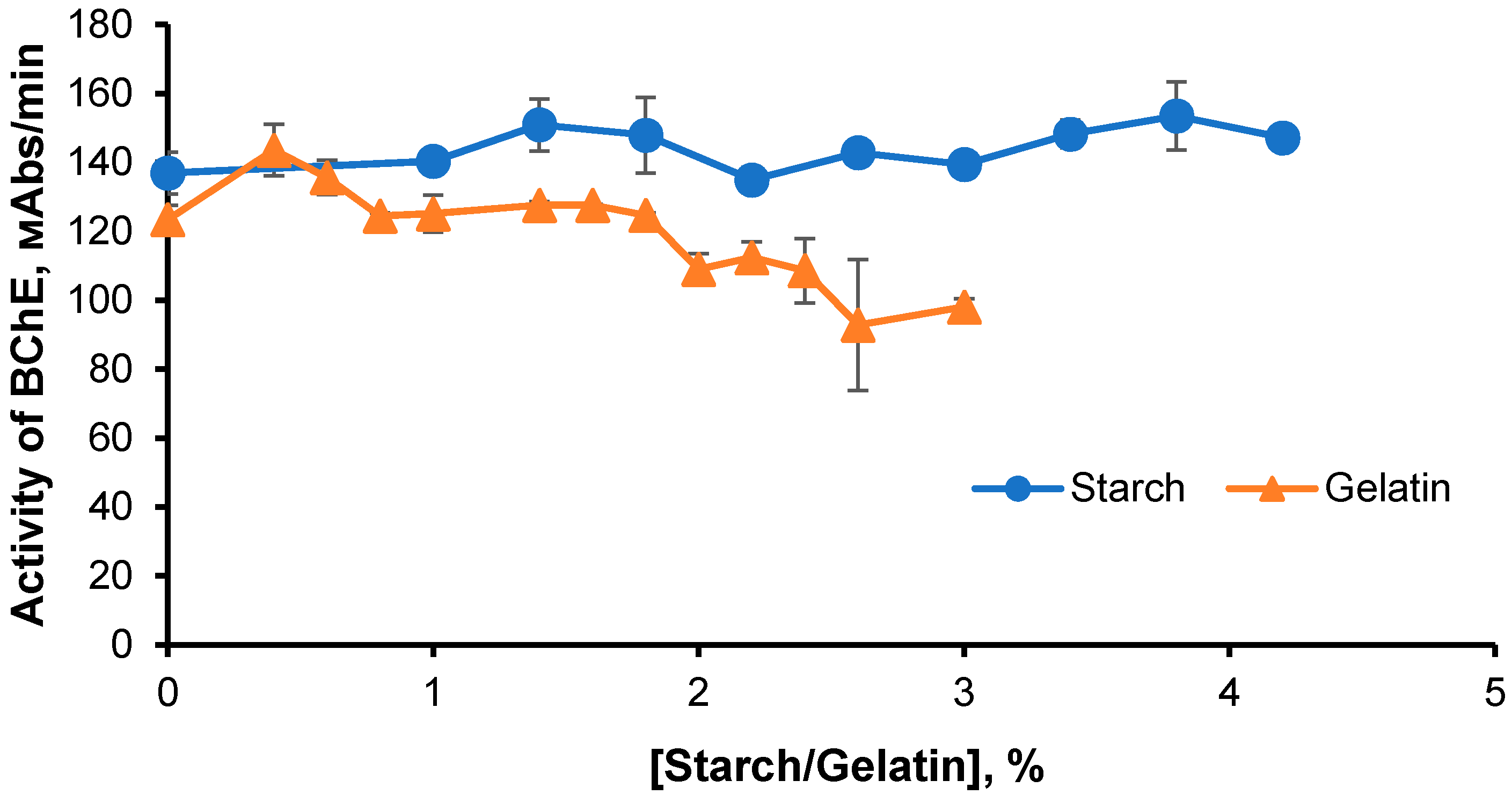 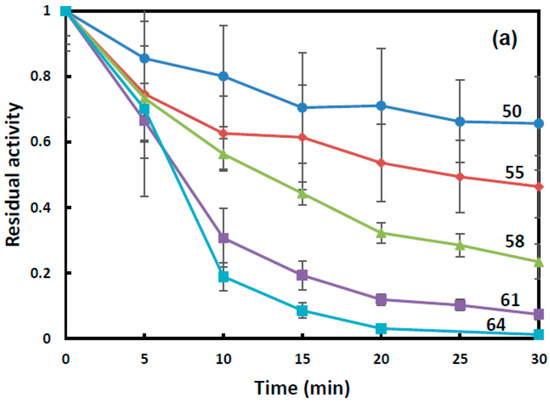 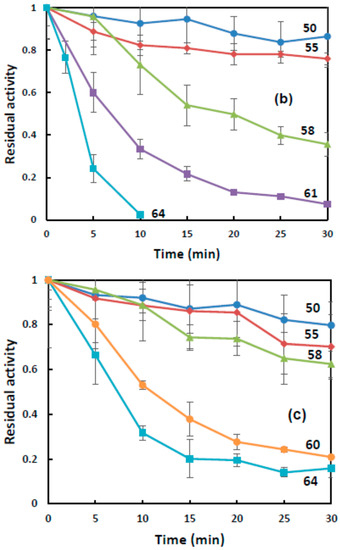 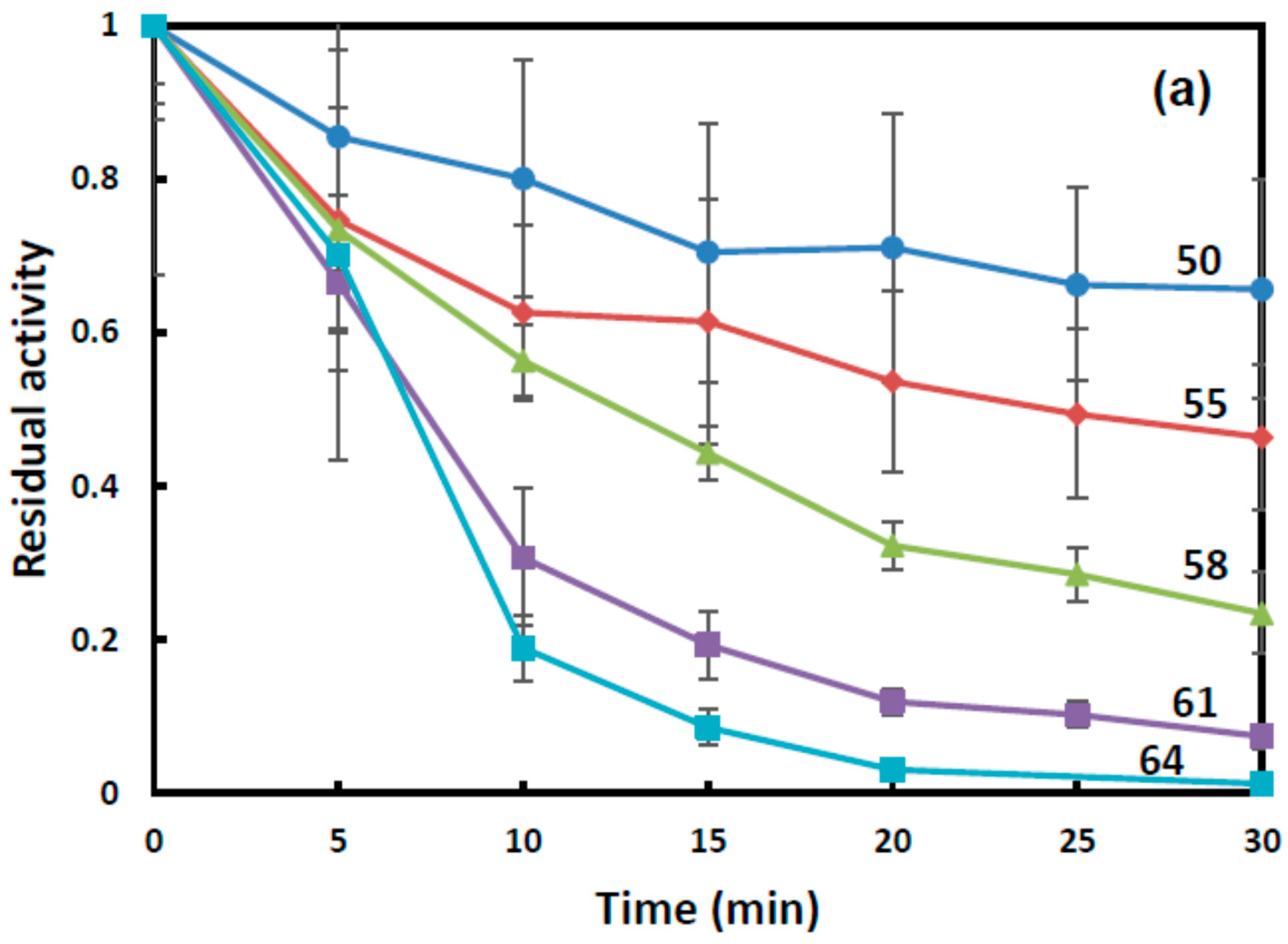 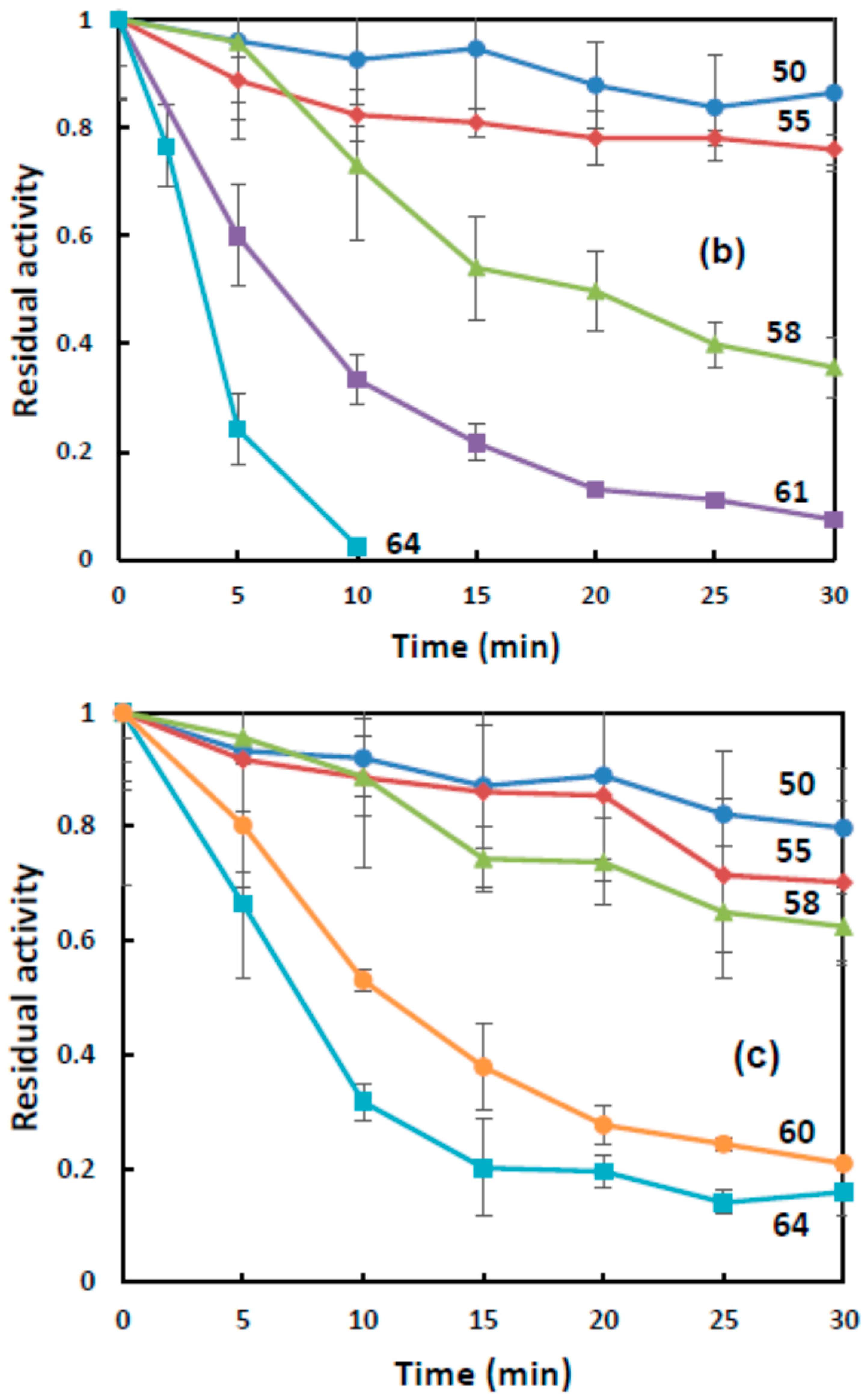 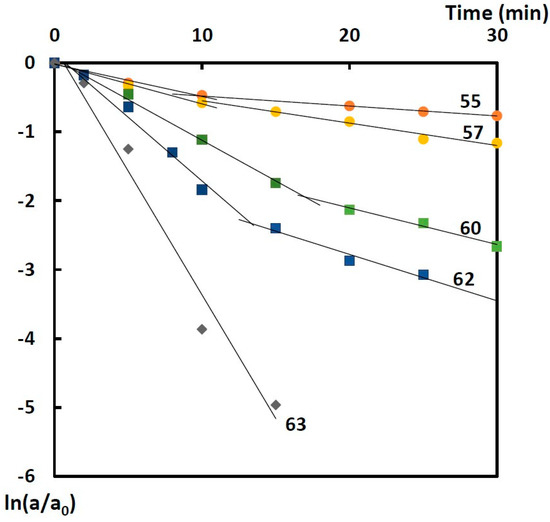 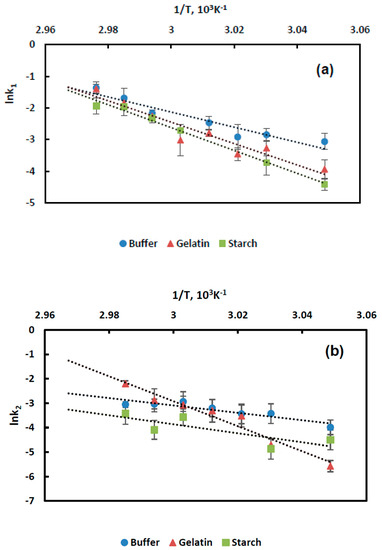 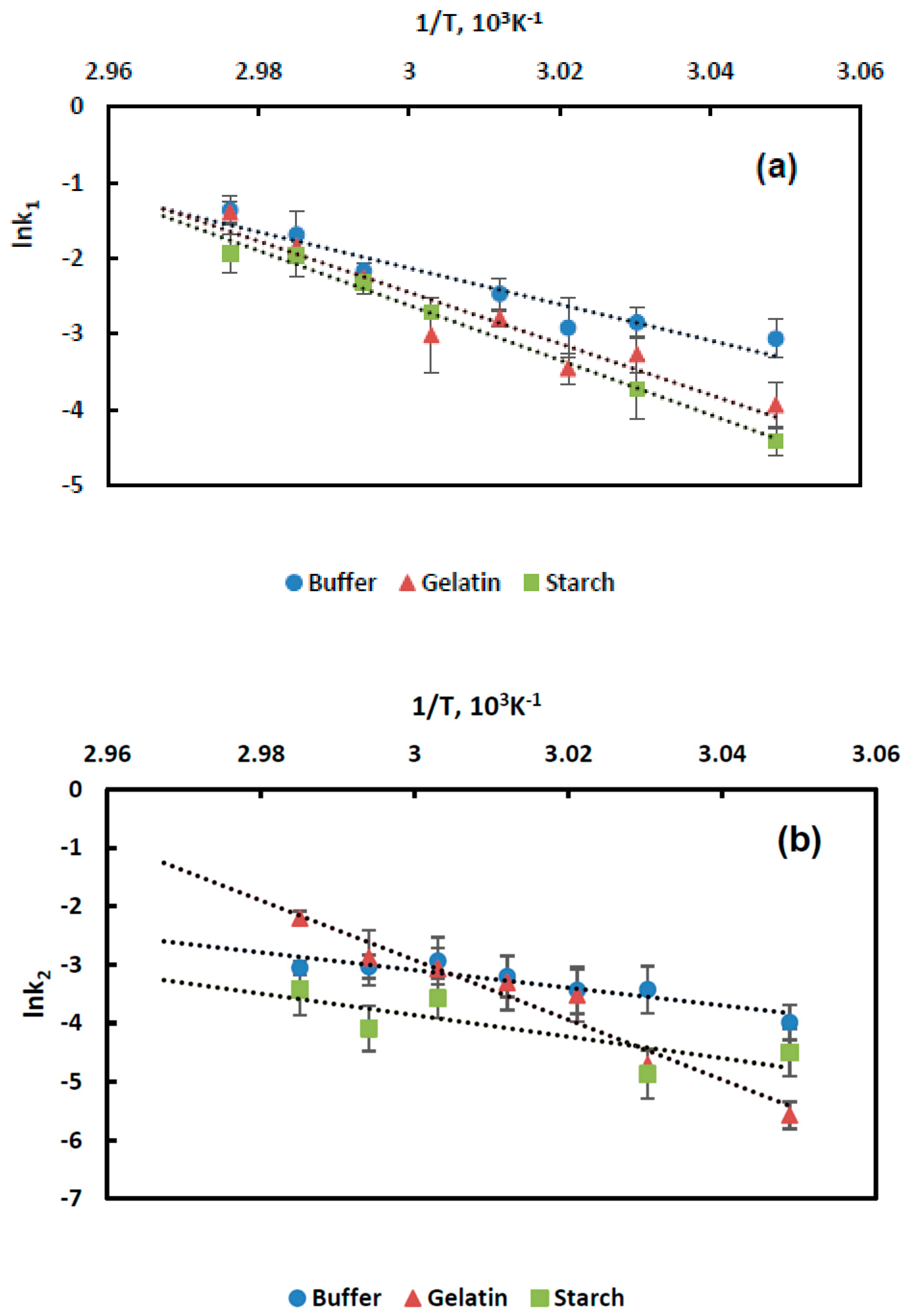 Table 1. Activation parameters for thermal inactivation of butyrylcholinesterase.
Table 1. Activation parameters for thermal inactivation of butyrylcholinesterase.
© 2021 by the authors. Licensee MDPI, Basel, Switzerland. This article is an open access article distributed under the terms and conditions of the Creative Commons Attribution (CC BY) license (https://creativecommons.org/licenses/by/4.0/).
We use cookies on our website to ensure you get the best experience. Read more about our cookies here.
Accept
We have just recently launched a new version of our website. Help us to further improve by taking part in this short 5 minute survey here. here.
Never show this again