Water Depollution and Photo-Detoxification by Means of TiO2: Fluoroquinolone Antibiotics as a Case Study

Photocatalysis by semiconductors is considered one of the most promising advanced oxidation processes (AOPs) and TiO2 is the most well-studied material for the removal of contaminants from the aquatic system. Over the last 20 years, pharmaceuticals have been the most investigated pollutants. They re-enter the environment almost unmodified or slightly metabolized, especially in the aquatic environment, since the traditional urban wastewater treatment plants (WWTPs) are not able to abate them. Due to their continuous input, persistence in the environment, and unpleasant effects even at low concentrations, drugs are considered contaminants of emerging concern (ECs). Among these, we chose fluoroquinolone (FQ) antibiotics as an environmental probe for assessing the role of TiO2 photocatalysis in the degradation of recalcitrant pollutants under environmental conditions and detoxification of surface waters and wastewaters. Due to their widespread diffusion, their presence in the list of the most persistent pollutants, and because they have been deeply investigated and their multiform photochemistry is well-known, they are able to supply rich information, both chemical and toxicological, on all key steps of the oxidative degradation process. The present review article explores, in a non-exhaustive way, the relationship among pollution, toxicity and remediation through titanium dioxide photocatalysis, with particular attention to the toxicological aspect. By using FQs as the probe, in depth indications about the different phases of the process were obtained, and the results reported in this paper may be useful in the improvement of large-scale applications of this technology, and—through generally valid methods—they could be deployed to other pharmaceuticals and emerging recalcitrant contaminants. View Full-Text
Keywords: TiO2 photosensitized degradation of drugs; fluoroquinolones; antibacterial resistance; ecotoxic effects TiO2 photosensitized degradation of drugs; fluoroquinolones; antibacterial resistance; ecotoxic effects
►▼ Show Figures 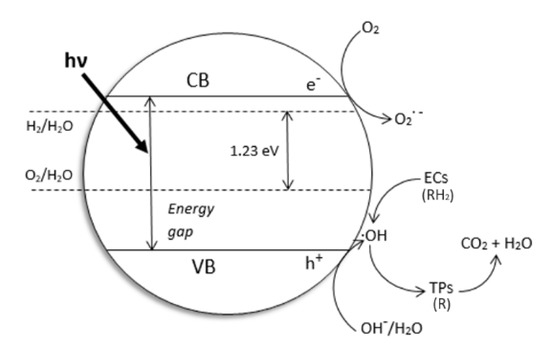