UV-Catalyzed Persulfate Oxidation of an Anthraquinone Based Dye

Wastewater from the textile industry has a substantial impact on water quality. Synthetic dyes used in the textile production process are often discharged into water bodies as residues. Highly colored wastewater causes various of problems for the aquatic environment such as: reducing light penetration, inhibiting photosynthesis and being toxic to certain organisms. Since most dyes are resistant to biodegradation and are not completely removed by conventional methods (adsorption, coagulation-flocculation, activated sludge, membrane filtration) they persist in the environment. Advanced oxidation processes (AOPs) based on hydrogen peroxide (H2O2) have been proven to decolorize only some of the dyes from wastewater by photocatalysis. In this article, we compared two very different photocatalytic systems (UV/peroxydisulfate and UV/H2O2). Photocatalyzed activation of peroxydisulfate (PDS) generated sulfate radicals (SO4•−), which reacted with the selected anthraquinone dye of concern, Acid Blue 129 (AB129). Various conditions, such as pH and concentration of PDS were applied, in order to obtain an effective decolorization effect, which was significantly better than in the case of hydroxyl radicals. The kinetics of the reaction followed a pseudo-first order model. The main reaction pathway was also proposed based on quantum chemical analysis. Moreover, the toxicity of the solution after treatment was evaluated using Daphnia magna and Lemna minor, and was found to be significantly lower compared to the toxicity of the initial dye. View Full-Text
Keywords: photocatalysis; dye; UV; peroxydisulfate; advanced oxidation process photocatalysis; dye; UV; peroxydisulfate; advanced oxidation process
►▼ Show Figures 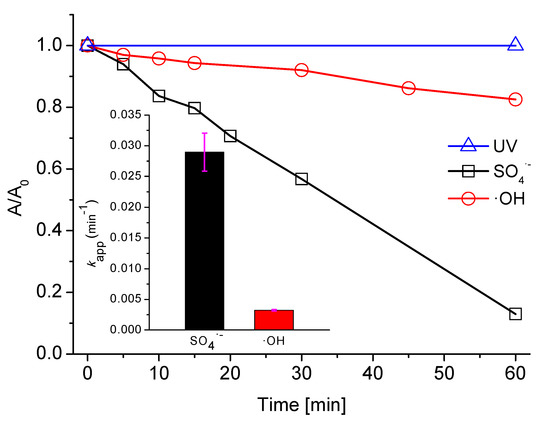