Categorization and Cooperation across Games
Previous Article in Journal

This Is How We Do It: How Social Norms and Social Identity Shape Decision Making under Uncertainty

Evolution of cooperation by reciprocity has been studied using two-player and n-player repeated prisoner’s dilemma games. An interesting feature specific to the n-player case is that players can vary in generosity, or how many defections they tolerate in a given round of a repeated game. Reciprocators are quicker to detect defectors to withdraw further cooperation when less generous, and better at maintaining a long-term cooperation in the presence of rare defectors when more generous. A previous analysis on a stochastic evolutionary model of the n-player repeated prisoner’s dilemma has shown that the fixation probability of a single reciprocator in a population of defectors can be maximized for a moderate level of generosity. However, the analysis is limited in that it considers only tit-for-tat-type reciprocators within the conventional linear payoff assumption. Here we extend the previous study by removing these limitations and show that, if the games are repeated sufficiently many times, considering non-tit-for-tat type strategies does not alter the previous results, while the introduction of non-linear payoffs sometimes does. In particular, under certain conditions, the fixation probability is maximized for a “paradoxical” strategy, which cooperates in the presence of fewer cooperating opponents than in other situations in which it defects. View Full-Text
Keywords: evolutionary game theory; cooperation; generosity; repeated game; prisoner’s dilemma evolutionary game theory; cooperation; generosity; repeated game; prisoner’s dilemma
►▼ Show Figures 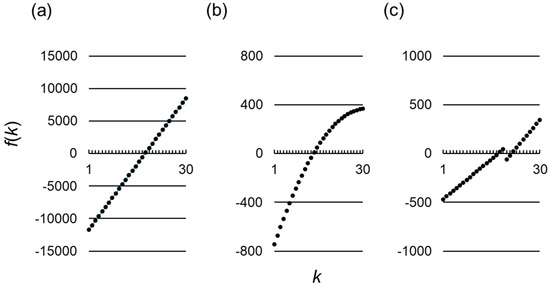