The natural compound amygdalin is popular among tumor patients as an alternative treatment option. However, knowledge about its precise mode of action remains poor. In the present study, amygdalin is shown to inhibit growth and disseminative properties of taxane-resistant prostate cancer cells. Further investigation is warranted to determine the role of amygdalin in the setting of metastasized prostate cancer.

Accounting for 1.3 million incident cases and 416,000 deaths, prostate cancer (PCa) was the 3rd most common neoplasm and the 5th leading cause of cancer deaths in 2017 worldwide, contributing to 7.1 million of disability-adjusted life years, with 88% coming from years of life lost and 12% from years lived with disability [1]. The incidence of PCa increased by a substantial 42% between 2007 and 2017, whereas the odds of developing this malignancy is currently 1 in 18 [1]. Alarmingly, the absolute number of annual new cases of metastatic PCa (mPCa) in the US was forecasted to rise by 42% over the next decade in the period 2015–2025 [2]. The resultant socioeconomic burden is formidable, since treatment costs of PCa are increasing more rapidly than those of any other tumor [3].
Growing healthcare expenditures are considerably attributable to several anticancer drugs approved for mPCa therapy in the last decade due to their efficacy for survival prolongation and improvement of quality of life [4]. While abiraterone acetate, enzalutamide, docetaxel, and cabazitaxel along with androgen deprivation therapy (ADT) were all the mainstay of systemic management of castration-resistant mPCa (mCRPC) for years, the upfront use of one of the first three compounds or apalutamide with concurrent ADT in hormone-sensitive mPCa (mHSPC) has revolutionized the treatment paradigm of this stage of disease [5]. While clinical effectiveness of either of the aforementioned approaches related to the extension of overall survival in mHSPC was similar in several indirect comparisons, further aspects, such as tumor characteristics, patient preferences, cost-effectiveness, and toxicity, should be taken into account for personalized decision making [5,6]. To this end, docetaxel and cabazitaxel seem to be cost-effective; however, they are more toxic for mPCa management when compared to antihormonal agents [4,5,7].
Despite an impressive activity in mPCa, disease progression is unavoidable after taxane treatment, necessitating the development of novel approaches conquering emerging drug resistance. Particularly in light of common taxane-related side effects during previous therapy [8], tolerability of the next-line approach is critical. In this context, amygdalin, a cyanogenic glycoside existing in seeds and kernels of some fruits and exerting antiproliferative, antioxidative, and immunoregulatory activities, might represent an intriguing option for mPCa treatment [9,10]. Importantly, no relevant toxicity for purified amygdalin utilized in “therapeutic” dosing has been reported yet [11]. Thus, the aim of our investigation was to assess anticancer activity of amygdalin in docetaxel- and cabazitaxel-resistant PCa cells.

Resistant sublines were established by continuous exposure to increasing concentrations of the respective drugs, as described before [13]. The docetaxel-resistant tumor cells were exposed to 2.5 ng/mL docetaxel (Sanofi, Paris, France), and cabazitaxel-resistant tumor cells were exposed to 2.5 ng/mL cabazitaxel (Sanofi, Paris, France) three times a week.
Amygdalin from apricot kernels (Sigma-Aldrich, Taufkirchen, Germany) was freshly dissolved in cell culture medium and added to tumor cells at 10 mg/mL based on earlier studies [14]. Controls remained untreated. In all experiments, treated tumor cell cultures were compared to nontreated cultures. To assess toxic effects of amygdalin and/or docetaxel and cabazitaxel, cell viability was determined by trypan blue (Gibco/Invitrogen).

Cell growth was measured using a 3-(4,5-dimethylthiazol-2-yl)-2,5-diphenyltetrazolium bromide (MTT) dye (Roche Diagnostics, Penzberg, Germany). PCa cells (100 µL, 1 × 104 cells/mL) were seeded onto 96-well tissue culture plates containing serial dilutions of amygdalin. Controls were incubated without amygdalin. After 24, 48, and 72 h, MTT (0.5 mg/mL) was added for 4 h. Subsequently, cells were lysed in a buffer containing 10% SDS in 0.01 M HCl. The plates then were incubated overnight at 37 °C, 5% CO2. Absorbance at 550 nm was detected for each well using a microplate enzyme-linked immunosorbent assay (ELISA) reader. Cell number after 24 h incubation was set to 100% in order to illustrate the kinetics of dose response.

A total of 500 PCa cells treated with 10 mg/mL amygdalin per well were transferred to 6-well plates. Untreated PCa cells served as controls. After 10 days incubation without medium change, cell colonies were fixed and counted. A colony was defined as consisting of at least 50 cells. Untreated controls were set to 100%.

Cell cycle analysis was carried out on subconfluent cells. Tumor cell populations were stained with propidium iodide, using a CycleTEST PLUS DNA Reagent Kit and then subjected to flow cytometry using FACScan (both from Becton-Dickinson, Heidelberg, Germany). A total of 10,000 events were collected from each sample. Data acquisition was carried out using CellQuest software, and cell cycle distribution was analyzed by ModFit software (Becton-Dickinson). The number of cells in G0/1, G2/M, or S phases was expressed as the percentage of the total cell number.

Six-well plates were coated with collagen G (obtained from calf skin, 90% collagen type I, and 10% collagen type III, Biochrom, Berlin, Germany; diluted to 400 µg/mL in phosphate-buffered saline (PBS)) or fibronectin (obtained from human plasma, BD Biosciences, diluted to 50 µg/mL in PBS) and laminin (obtained from the Engelbreth–Holm–Swarm mouse tumor, BD Biosciences diluted to 50 µg/mL in PBS) overnight at 4 °C. Plastic dishes were used as the background control. To block nonspecific cell adhesion, plates were washed with 1% bovine serum albumin (BSA) in PBS. Subsequently, 0.5 × 106 PCa cells, treated with culture medium alone or pretreated with amygdalin, were added to each well for 1 h. Then, nonadherent cells were fixed with 1% glutaraldehyde and counted. The mean cellular adhesion rate (number of cells adherent to the coated wells minus number of cells adherent to the noncoated wells) was determined from five different observation fields (5 × 0.25 mm2).

Serum-induced chemotactic movement was assessed by six-well (8-µm pores) Transwell chambers (Greiner, Frickenhausen. Germany) with PCa cells that were pretreated with amygdalin for 72 h. A total of 0.5 × 106 PC3 or DU145 cells per mL (LNCaP did not migrate and, thus, were excluded from the chemotaxis assay) were then placed in the upper chamber in serum-free medium, either free of amygdalin or containing amygdalin. The lower chamber contained 10% serum providing the serum gradient necessary for tumor cell migration. After 20 h incubation, the nonmigrating cells on upper surface of the Transwell membrane were gently removed with a cotton swab. Cells that had migrated to the lower surface of the membrane were stained and counted. The mean chemotaxis rate was determined from five different observation fields.

All experiments were performed at least 3 times, and statistical significance was determined with the Student’s t-test or Wilcoxon–Mann–Whitney U test. Differences were considered statistically significant at p < 0.05.

The PCa cell lines were treated with gradually increasing concentrations of docetaxel (PC3, DU145, and LNCaP) or cabazitaxel (DU145 and LNCaP) to induce resistance. Figure 1 depicts the dose–response relationship of parental (sensitive) versus-resistant cells. Docetaxel, applied at 2.5 ng/mL, already caused a significant growth reduction of PC3, DU145, and LNCaP cells, whereas higher concentrations were necessary to (moderately) suppress growth of the drug-resistant cells. Cabazitaxel did not induce resistance in PC3 cells. However, low-dosed cabazitaxel (1.25 ng/mL) caused a significant growth blockade of DU145 and LNCaP cells, which was not the case in the respective resistant sublines. All further studies were carried out in the presence of 2.5 ng/mL docetaxel or 2.5 ng/mL cabazitaxel.

Amygdalin, applied at 10 mg/mL, caused a significant downregulation of PC3, DU145, and LNCaP cell numbers, independent of whether they were resistant to cabazitaxel or docetaxel or not (Figure 2).
Proliferation data (BrdU uptake) were inhomogeneous. Concerning the sensitive cell lines, a significant reduction of BrdU incorporation in the presence of amygdalin was noted after 72 h in PC3 but after 24 and 48 h in the DU145 and LNCaP cells (Figure 3A). Based on the docetaxel-resistant cells, the amygdalin-triggered effects were at a maximum after 24 and 48 h in all cell lines evaluated. Most importantly, a very prominent loss of PC3 and DU145 tumor clones was seen following amygdalin exposure (Figure 3B). No clones were recorded at all when LNCaP cells (both sensitive and resistant) were treated with amygdalin.

3.4. Modulation of Adhesion and Invasion by Amygdalin

Amygdalin exerts distinct anticancer activity impeding both cell growth and disseminative capacity of taxane-resistant PCa cells. Further scientific efforts are anticipated in order to define the clinical relevance of this compound as an integrative component in the treatment of metastasized PCa.

The following supporting information can be downloaded at: https://www.mdpi.com/article/10.3390/cancers14133111/s1, File S1: Original Blots.

This research was supported by the Brigitta & Norbert Muth Foundation.

Not applicable for not involving humans or animals.

Not applicable for not involving humans.

All data generated or analyzed during this study are included in this published article. 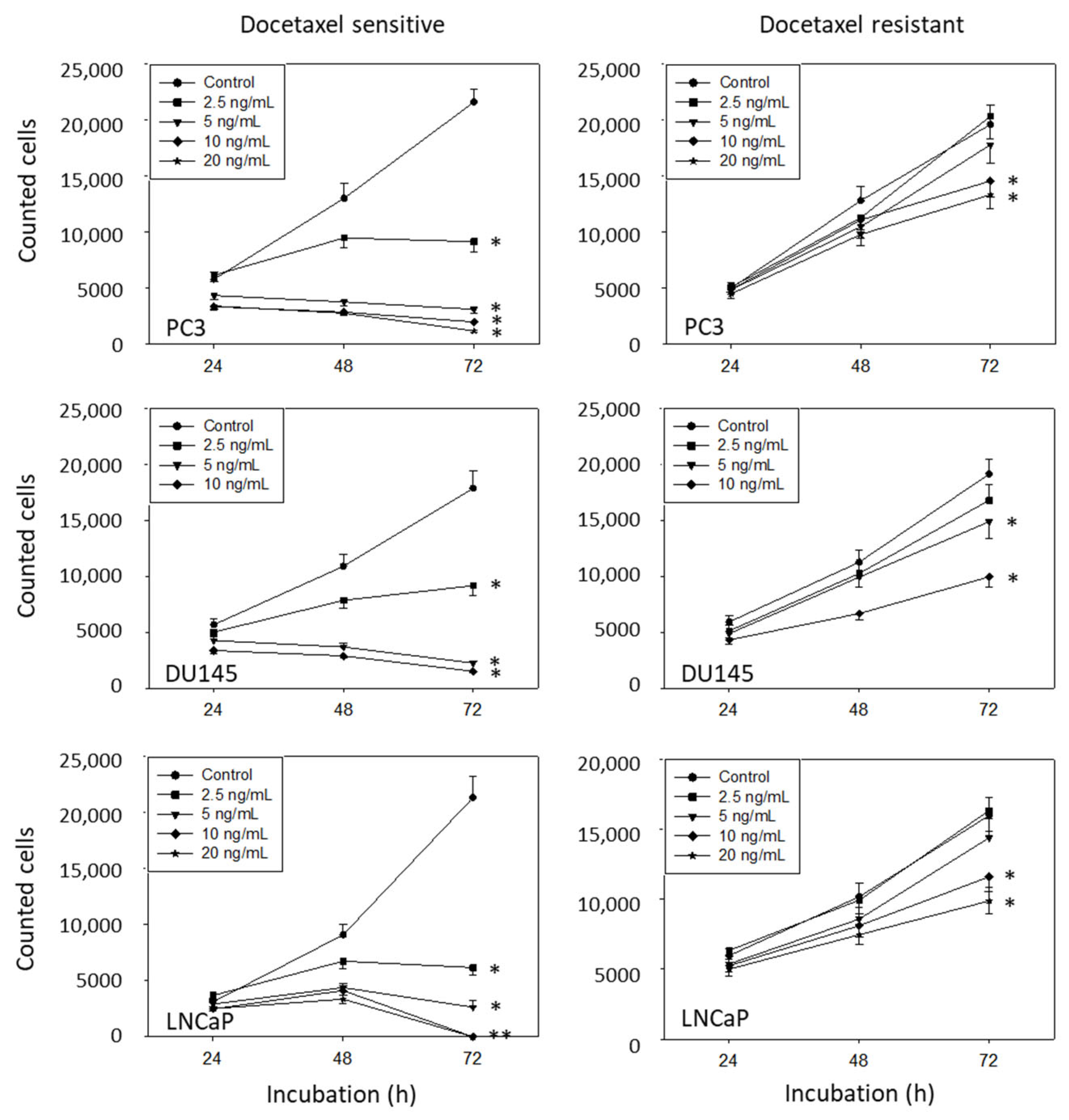 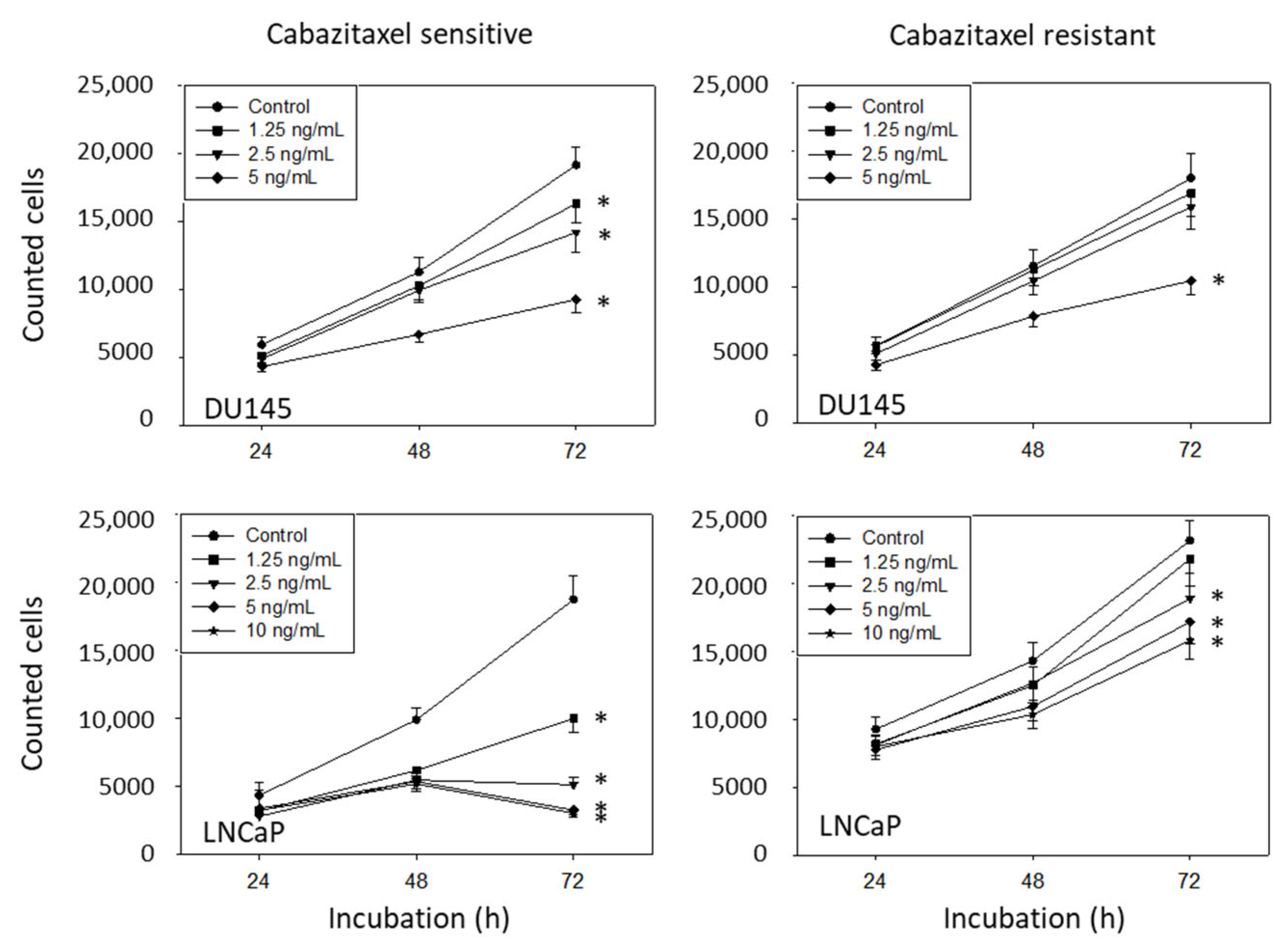 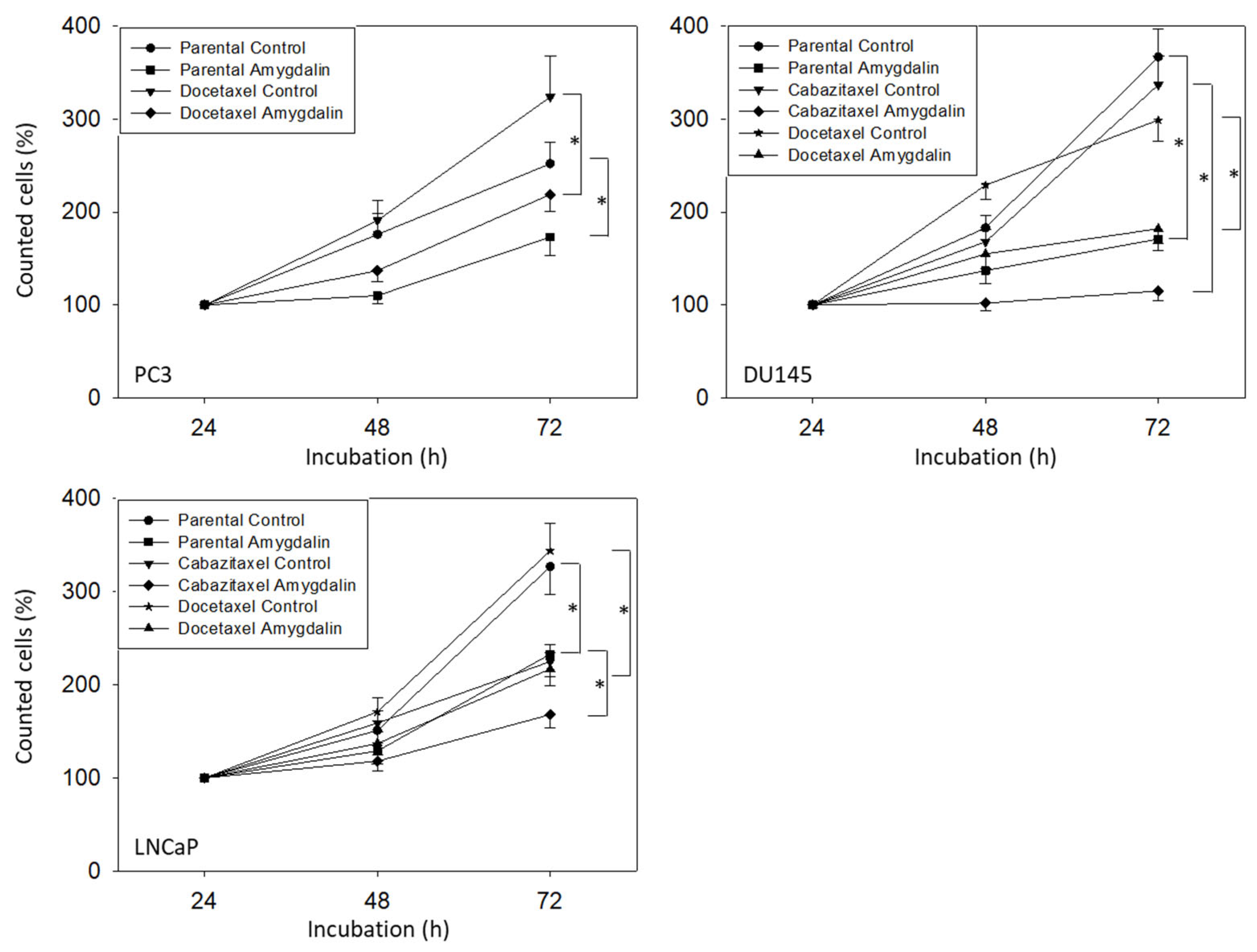 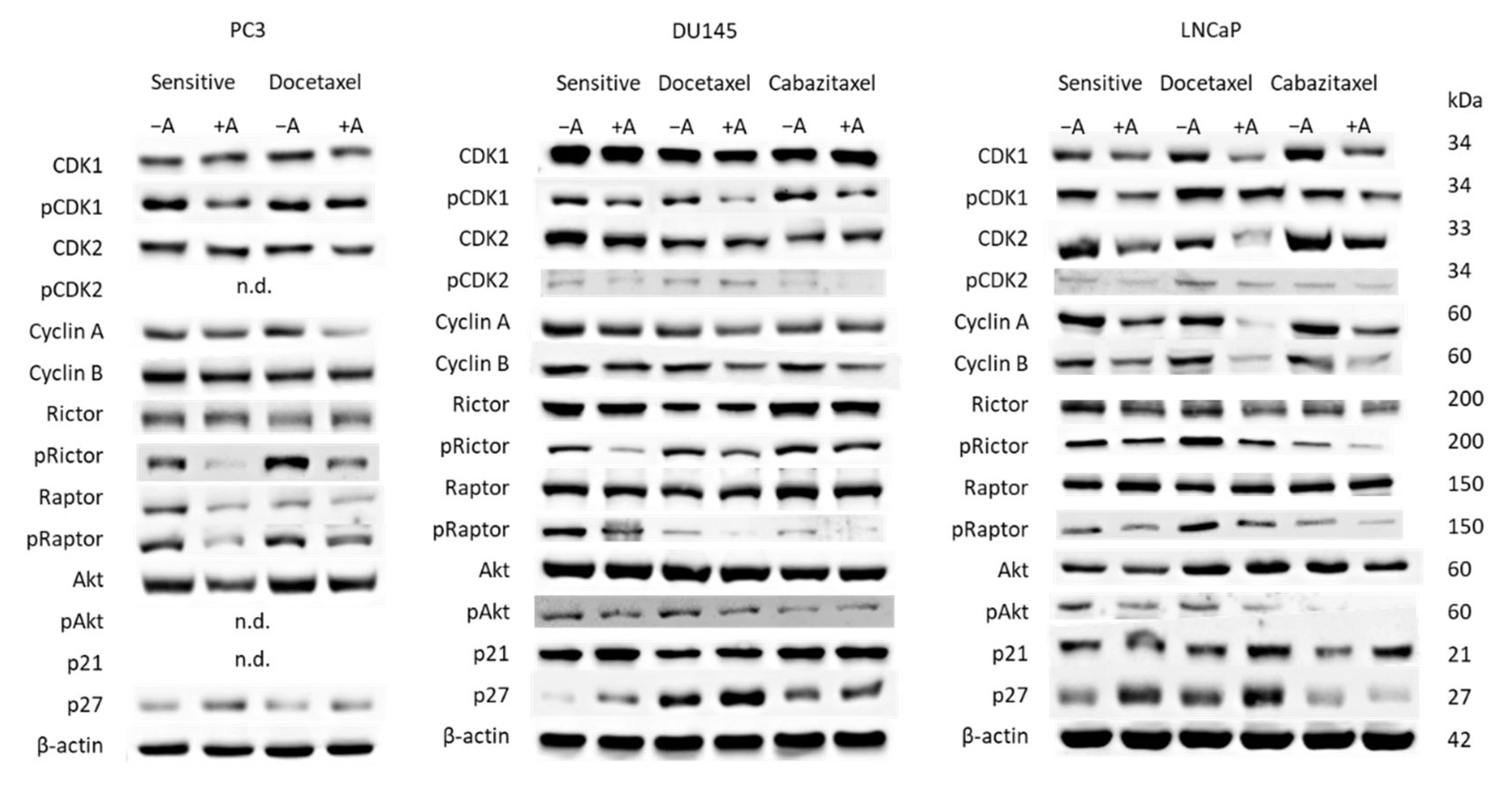 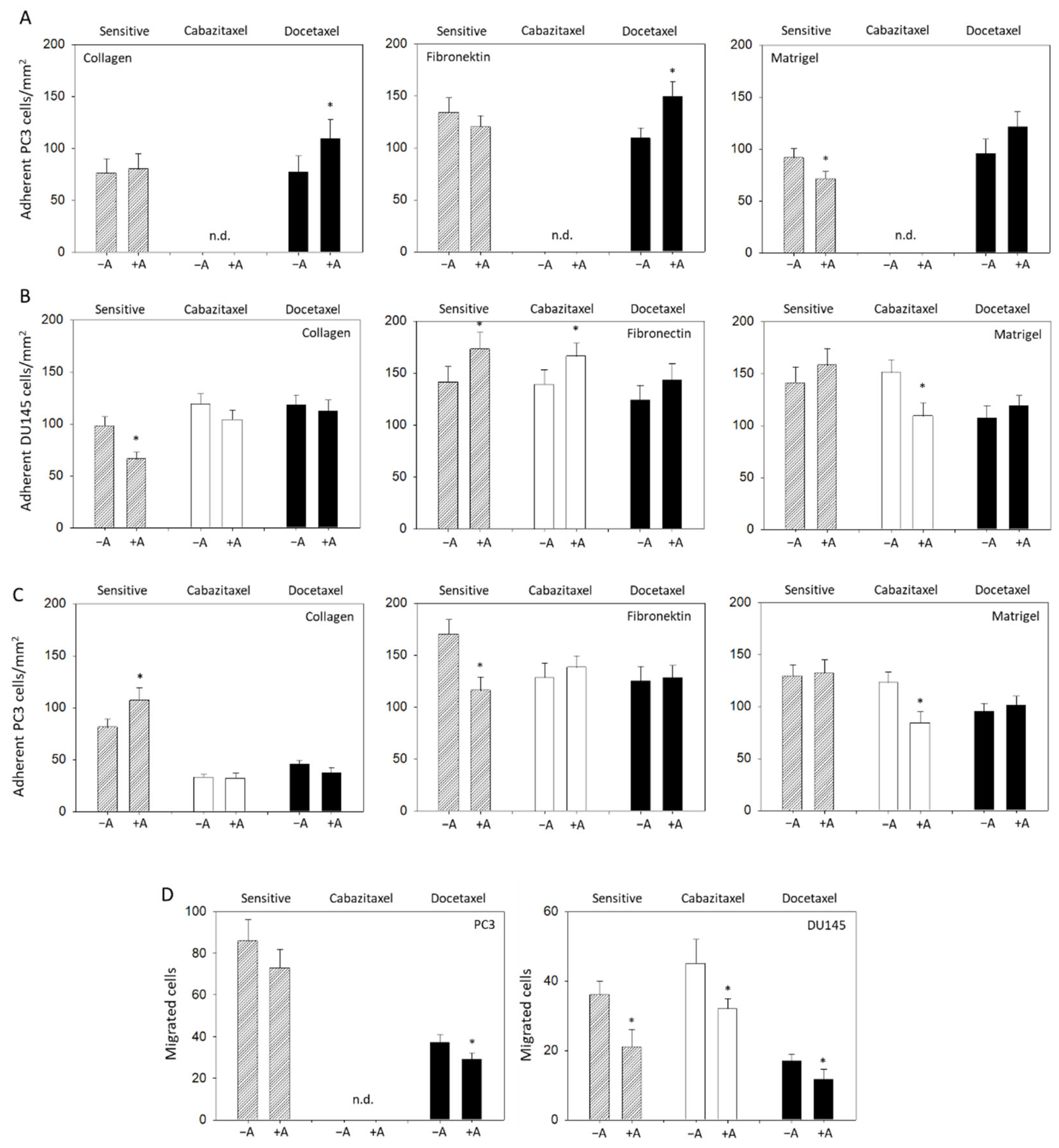