Expedition into Exosome Biology: A Perspective of Progress from Discovery to Therapeutic Development
Previous Article in Journal

The Two-Faced Role of SIRT6 in Cancer

Triple-negative breast cancer (TNBC) has a poor outcome compared to the other major breast cancer subtypes and new therapies are needed. We sought to clarify the functions of a ubiquitous protein, Annexin A1, in the development and progression of TNBC. We found that Annexin A1 expression correlated with poor patient prognosis in basal-like breast tumors and also in the basal like-2 subset of TNBCs. Stable knockdown of Annexin A1 attenuated the growth of SUM149 xenografts, which model basal-like 2 tumors. In a polyoma middle T antigen-driven allograft model of breast cancer, Annexin A1 depletion markedly delayed tumor formation, induced epithelial to mesenchymal transition and upregulated basal markers. Finally, loss of Annexin A1 resulted in the loss of a discrete CD24+/Sca1− population containing putative tumor-initiating cells. Collectively, our data demonstrate a novel cell-autonomous role for Annexin A1 in the promotion of tumor-forming capacity in certain TNBC tumors.

Triple-negative breast cancer (TNBC) has a poor outcome compared to other breast cancer subtypes, and new therapies that target the molecular alterations driving tumor progression are needed. Annexin A1 is an abundant multi-functional Ca2+ binding and membrane-associated protein. Reported roles of Annexin A1 in breast cancer progression and metastasis are contradictory. Here, we sought to clarify the functions of Annexin A1 in the development and progression of TNBC. The association of Annexin A1 expression with patient prognosis in subtypes of TNBC was examined. Annexin A1 was stably knocked down in a panel of human and murine TNBC cell lines with high endogenous Annexin A1 expression that were then evaluated for orthotopic growth and spontaneous metastasis in vivo and for alterations in cell morphology in vitro. The impact of Annexin A1 knockdown on the expression of genes involved in mammary epithelial cell differentia tion and epithelial to mesenchymal transition was also determined. Annexin A1 mRNA levels correlated with poor patient prognosis in basal-like breast tumors and also in the basal-like 2 subset of TNBCs. Unexpectedly, loss of Annexin A1 expression had no effect on either primary tumor growth or spontaneous metastasis of MDA-MB-231_HM xenografts, but abrogated the growth rate of SUM149 orthotopic tumors. In an MMTV-PyMT driven allograft model of breast cancer, Annexin A1 depletion markedly delayed tumor formation in both immuno-competent and immuno-deficient mice and induced epithelial to mesenchymal transition and upregulation of basal markers. Finally, loss of Annexin A1 resulted in the loss of a discrete CD24+/Sca1− population containing putative tumor initiating cells. Collectively, our data demonstrate a novel cell-autonomous role for Annexin A1 in the promotion of tumor-forming capacity in a model of human breast cancer and suggest that some basal-like TNBCs may require high endogenous tumor cell Annexin A1 expression for continued growth. View Full-Text
Keywords: Annexin A1; breast cancer; mouse model; allograft; xenograft Annexin A1; breast cancer; mouse model; allograft; xenograft
►▼ Show Figures 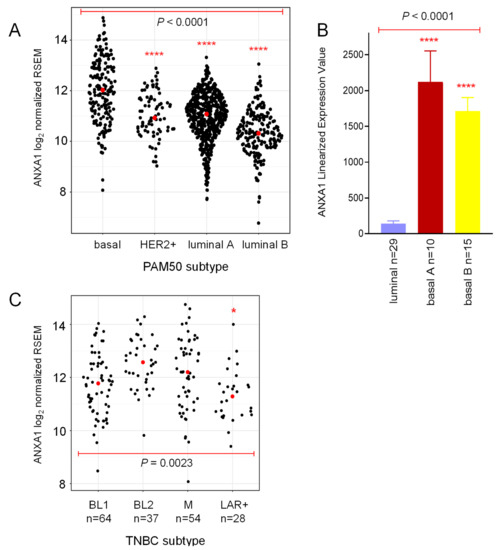