HCC in the Era of Direct-Acting Antiviral Agents (DAAs): Surgical and Other Curative or Palliative Strategies in the Elderly
Next Article in Special Issue

Hematologic malignancies account for 8–9% of all incident cancers, and the incidence has generally increased since the 1960s [1,2]. The major hematologic malignancies are Hodgkin lymphoma (HL), non-Hodgkin lymphoma (NHL), leukemia, and multiple myeloma (MM). The epidemiology and risk factors of these cancers have been studied for decades, but their etiology is still not entirely clarified. Heterogeneity within hematologic malignancy subtypes seems to pose a challenge for epidemiological identification of risk factors. Additionally, the incidence rates vary by age, sex, and geography [3,4,5,6,7,8,9].
A recent study of twins in the Nordic countries revealed that twin concordance for cancer often manifests across, rather than within, cancer types [10,11]. Namely, if one twin develops cancer, the co-twin has an increased risk of developing cancer but not necessarily at the same site. Previous epidemiological studies of hematologic malignancies suggest that this is indeed the case; they report evidence of familial predisposition across both hematologic and non-hematologic malignancies [12,13,14,15,16,17,18,19,20,21]. For instance, among women from Connecticut, lung cancer in first-degree relatives as well as breast and ovary cancer in siblings are associated with a significantly increased risk of NHL [12]. Moreover, the results indicate a stronger association between siblings than parents [9,12,13,14,15]. The impact of sex on familial predisposition has also been assessed, though the results differ by type of malignancy [9,14,15,16]. While the body of research indicates that familial effects for hematologic malignancies influence the risks, they are not able to further identify the source of these effects into those explained by shared genes and environment.
Twin studies allow for delving into the nature of this familial predisposition by partitioning the variation in risk into components explained by genetic and environmental influences. In 1996, Mack et al. [22] published findings from an American twin study suggesting genetic susceptibility to HL in young adulthood. A few years later, Lichtenstein et al. [23] conducted a study of twins from Denmark, Finland, and Sweden and reported familial influences for leukemia but did not take timing of events into account. A more recent Nordic study by Mucci et al. [10] also included Norwegian twins and had a longer follow-up time; they categorized leukemia as “acute” or “other” and provided an uncertain estimate of heritability for other leukemia: 57% (95% CI: 0–100%). Both of these Nordic studies analyzed multiple cancer types, including hematologic malignancies, but neither were able to estimate genetic and environmental variance for the remaining hematologic malignancies as no or too few concordant pairs were observed.
In this study, we utilize the world’s most comprehensive database of twins for studying cancer. We aim to explore the genetic and environmental contributions to variation in risk of hematologic malignancies and to characterize familial dependence within and across hematologic malignancies. We take into account timing of events, censoring, and competing risk of death.

The Nordic Twin Study of Cancer (NorTwinCan) is an international, multidisciplinary collaboration of researchers working to investigate the genetic and environmental underpinnings of cancer. The NorTwinCan cohort is based on nationwide twin registers linked to national cancer and mortality registers in Denmark, Finland, Norway, and Sweden [10,11,23]. Details about the twin registers in each of the four participating countries were described previously by Skytthe et al. [24]. Following the latest linkage update in 2018, the study now includes around 400,000 individual twins from four countries, out of which around 315,000 have known zygosity [11]. The analyses presented here are based on these 315,000 monozygotic (MZ) and dizygotic (DZ) twins. The DZ twin pairs can be of the same or opposite sex unless otherwise specified.
Cancer diagnoses were based on the International Statistical Classification of Diseases and Related Health Problems, Tenth Revision (ICD-10) and were grouped according to the NORDCAN classification system [25]. This study includes the main hematologic malignancies, i.e., Hodgkin lymphoma (HL) (C81), non-Hodgkin lymphoma (NHL) (C82–86), multiple myeloma (MM) (C90), and leukemia (C91–95). Due to inconsistencies among the classification of leukemia subtypes between Nordic countries, a sub-classification of leukemia was not carried out. In the Danish data, ICD-10 was used along with the International Classification of Diseases for Oncology, Third Edition (ICD-O-3) when identifying lymphoma incident cases, which might cause the cumulative incidences of HL and NHL to diverge from those of other Nordic countries. The incidence of cancer among twins has been demonstrated to mirror that of the general population [10,24].

For hematologic malignancies overall and separately, we estimated the lifetime risk, defined as risk of cancer diagnosis before age 100. The lifetime risks were obtained from the cumulative incidence function by age estimated using nonparametric counting process modelling, as described by Scheike et al. [26]. The lifetime risks were stratified by sex, zygosity, and cohort for representativeness comparison. Delayed entry determined by the date of register initiation and right-censoring caused by end of follow-up or emigration were accounted for by this approach. Likewise, competing risk of death was accounted for.
The nonparametric risk scale approach, described by Scheike et al. [27], allows for the estimation of cross-cancer familial dependence in terms of case-wise concordance and relative recurrence risk. The case-wise concordance is the conditional risk of cancer in a twin before some age given that the other twin developed (another) cancer before that age and was estimated using nonparametric counting process modelling, as described by Scheike et al. [27]. This is referred to as familial risk. Familial risks for DZ twins also apply to full siblings, as they are as genetically alike. Familial risk by age was estimated for overall hematologic malignancies, and lifetime familial risks were estimated for hematologic malignancies, overall and separately. The relative recurrence risk of cross-cancers was defined as the concordance of cross-cancers, that is, the risk of both twins in a pair having cancer (different cancers) before some age, relative to the risk of the two cancers occurring independently. The latter is given by the product of cumulative incidences. Cross-cancer relative recurrence risks were estimated within the hematologic malignancies and for overall hematologic malignancy vs. other cancer sites. Familial predisposition to cross-cancer is indicated by an increased familial risk among DZ twins compared to the cumulative incidence or a relative recurrence risk for DZ twins greater than one. Furthermore, the influence of shared genetic factors is indicated by a higher familial dependence among MZ twins compared to DZ twins [26]. Inference of the measures assume approximate normality in distribution of estimators and test of differences was performed using a Pepe–Mori type test derived in a way similar to that described by Scheike et al. [27].

The overall magnitude of the genetic and environmental contributions to the variation in risk for each hematologic cancer, taking the timing of events into account, can be assessed by modelling the difference in MZ and DZ pair covariances to the total variance in cancer risk assuming equal margins in MZ and DZ twins. This was achieved parametrically using the bivariate biprobit model, that is, the classic liability-threshold approach, taking censoring into account by inverse probability weighting [28]. Tetrachoric correlations for MZ and DZ pairs and further variance components of the polygenic biometric model from quantitative genetics, the “ADCE model” [28,29], were obtained from this model. The components that contribute to variance are additive genetic (A), dominant genetic (D), shared environmental (C), and unique environmental (E) effects. Heritability is then defined as the proportion of variation in liability to develop cancer attributed to genetic factors, that is, the sum of A and D. Shared environmental effects are those experiences and exposures that affect both twins in a pair. Unique environmental effects influence one twin but not the other, but it also includes measurement error as well as random effects and genetic differences even between MZ pairs. Hence, environmental effects in this setting refer to external non-genetic influences and should not be confused with environmental risk factors, i.e., environmental exposures and lifestyle-related behaviors [30]. This model also provides estimates of cumulative incidence by age as well as familial risk by age, though not for different cancers. The parametric estimates of familial risk were compared to those from the nonparametric model and in turn also adjusted for competing risk of death.
Furthermore, the heritability estimated nonparametrically on the risk scale was obtained in line with the “ACE” sub-model as the ratio of twice the difference in MZ and DZ concordance risk to the total variance in risk based on nonparametric estimates [26,31]. This is not directly comparable to the heritability modelled parametrically on the liability scale [26]. The heritability in risk was estimated by age for overall hematologic malignancies and at age 100 for overall hematologic malignancy vs. other cancer sites.
When illustrating risks and genetic and environmental effects by age, we focused on age 40 and older but did not restrict occurrences by age.
Model sensitivity was assessed by comparing the parametric and nonparametric estimates of cumulative incidence functions and familial risks by age. If there were no substantial differences, we relied on the parametric estimates as they allow for more accurate inference.
All analyses were performed using the statistical software R version 3.5.2 [32] with mets package version 1.2.6 [26,28]. All tests were two-sided and performed at the 5% significance level.

This research was funded by grants from the Nordic Cancer Union grant number 195020, project entitled “Genetic Epidemiology and Familial Risk of Cross-Cancer Associations: A Nordic Twin Study-II”, and from the AgeCare program of the Academy of Geriatric Cancer Research, Odense University Hospital, as well as by a scholarship from the Faculty of Health Sciences, University of Southern Denmark.

Ethical review and approval were waived for this study, since no ethics approval is needed for register-based studies according to legislation in the Nordic countries. The appropriate register authorities in each country have given permission for the record linkages.

Restrictions apply to the availability of these data. The data were obtained from the participating twin cohorts and national cancer registries. Requests to access additional data need to be made through the individual national cohorts and registers responsible for the data sets.

The authors are thankful to The Danish Twin Registry for hosting and managing the joint Nordic twin data. We also acknowledge the contribution of all of the researchers and staff of the twin and cancer registries contributing to the NorTwinCan project. 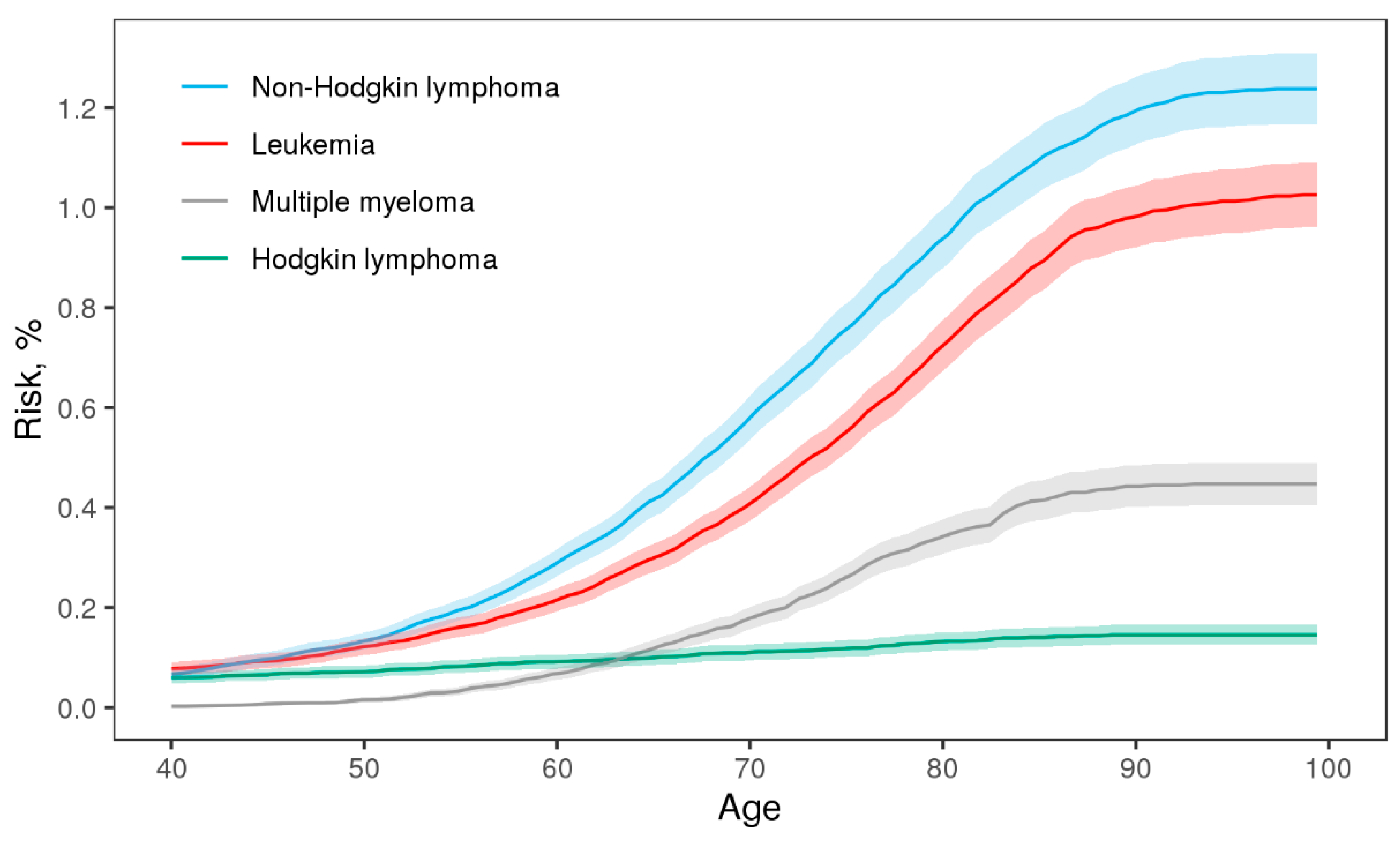 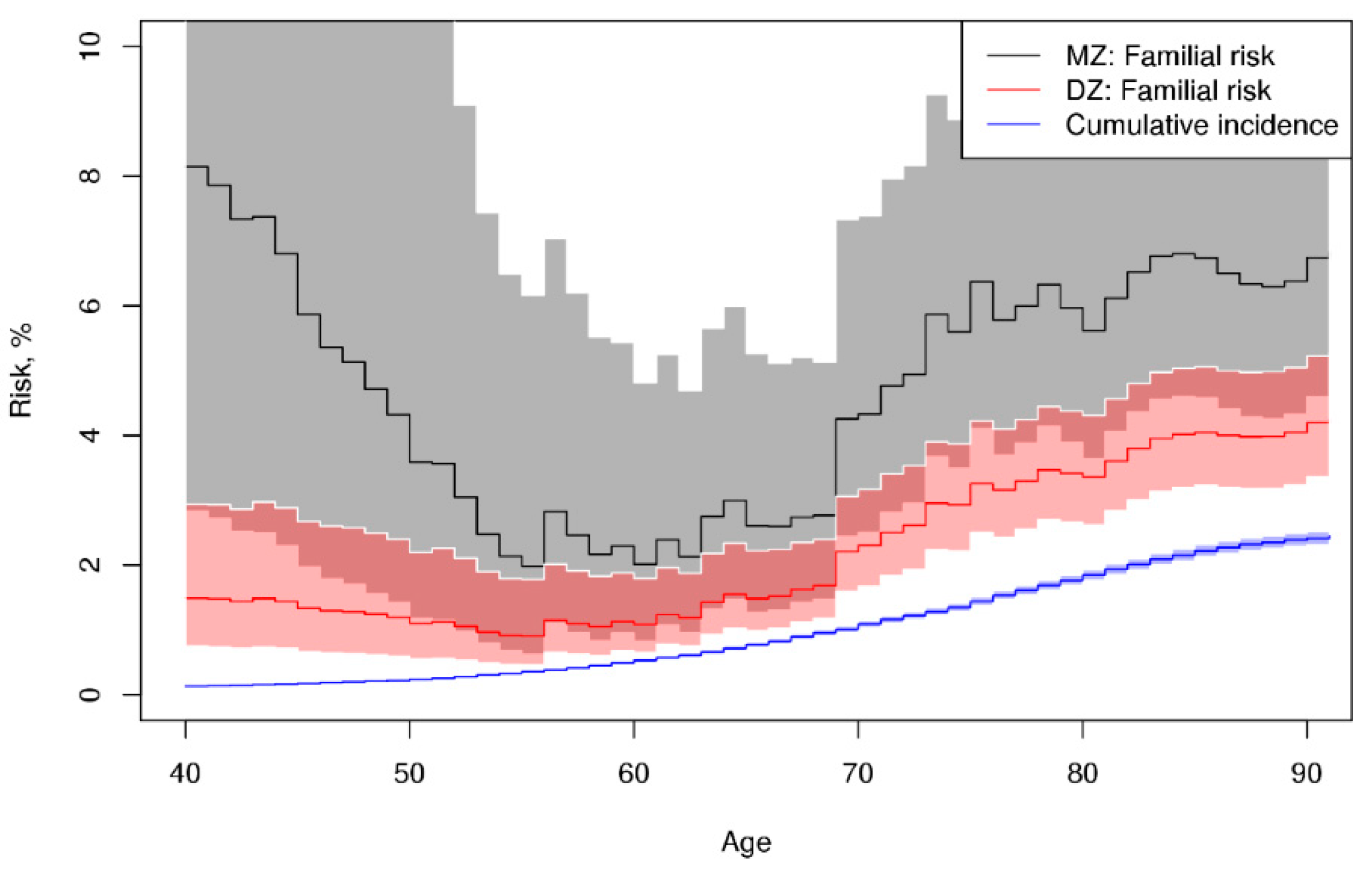