Epithelial-mesenchymal transition (EMT) is a process involved not only in morphogenesis and embryonic development, but also in cancer progression, whereby tumor cells obtain a more aggressive metastatic phenotype. Anterior gradient protein 2 (AGR2) maintains the epithelial phenotype and blocks the induction of EMT, thus playing an undeniable role in tumor progression. However, the mechanism through which AGR2 expression is regulated, not only during EMT, but also in the early stages of cancer development, remains to be elucidated. In the present study, we show an inverse correlation of AGR2 with ZEB1 (zinc finger enhancer binding protein, δEF1) that was verified by analysis of several independent clinical data sets of lung adenocarcinomas. We also identified the ZEB1 binding site within the AGR2 promoter region and confirmed AGR2 as a novel molecular target of ZEB1. The overexpression of ZEB1 decreased the promoter activity of the AGR2 gene, which resulted in reduced AGR2 protein level and the acquisition of a more invasive phenotype of these lung cancer cells. Conversely, silencing of ZEB1 led not only to increased levels of AGR2 protein, but also attenuated the invasiveness of tumor cells. The AGR2 knockout, vice versa, increased ZEB1 expression, indicating that the ZEB1/AGR2 regulatory axis may function in a double negative feedback loop. In conclusion, we revealed for the first time that ZEB1 regulates AGR2 at the transcriptional level, while AGR2 presence contributes to ZEB1 mRNA degradation. Thus, our data identify a new regulatory mechanism between AGR2 and ZEB1, two rivals in the EMT process, tightly associated with the development of metastasis. View Full-Text
Keywords: AGR2; EMT; ZEB1; cancer AGR2; EMT; ZEB1; cancer
►▼ Show Figures 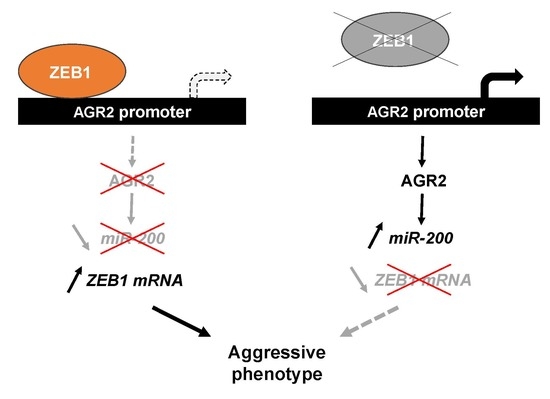