Epithelial ovarian cancer (EOC) is the second most common cause of death among all gynecological malignancies, leading to 125,000 deaths per year worldwide [1]. EOC is commonly referred to as a silent killer, which can be attributed to non-specific symptoms and a lack of effective screening tools. As a result, 75% of patients present with advanced stage disease [2]. The five-year survival rate of advanced stage EOC is approximately 19–29% [3].
The standard treatment for patients with apparent early-stage EOC is a staging procedure consisting of the removal of both ovaries, fallopian tubes, uterus, omentum and lymph nodes and careful the examination of surrounding tissues for the presence of metastatic spread. If no suspicious lesions are detected, biopsies are taken from normal-appearing tissue in predefined areas to determine the extent of disease and the possible need for additional chemotherapy [4]. For patients with advanced-stage disease, in whom complete cytoreduction seems feasible, treatment consists of primary cytoreductive surgery followed by adjuvant platinum-based chemotherapy [5]. Patients with significant co-morbidities, or in whom it is unlikely to reach complete cytoreduction, receive neoadjuvant chemotherapy (NACT) followed by interval cytoreductive surgery. For both early- and advanced-stage disease, the completeness of surgery is the most important prognostic factor for survival [1,6,7,8]. Since the gynecologic oncologist must rely on visual inspection and palpation for detecting metastatic lesions intraoperatively, tumor tissue may remain undetected and potentially lead to undertreatment and subsequent impaired survival. A novel technique which may provide surgical guidance is tumor-targeted molecular imaging.
A leading example of tumor-targeted molecular imaging is near-infrared fluorescence (NIRF) imaging. NIRF imaging can be used intraoperatively to accurately discriminate malignant from benign tissue in real time using fluorescent probes. Ideally, an NIRF probe consists of targeting moieties such as antibodies, peptides or ligands which bind with high affinity to proteins or receptors that are overexpressed on the cell surface of tumor cells but are absent on adjacent normal cells. These targeting moieties are conjugated to a fluorophore which emits light in the near-infrared range (λ = 700–900 nm) [9,10]. The tumor-targeted NIRF probe is intravenously administered to the patient prior to surgery [11], and once the probe has bound to its target, malignant cells will be specifically illuminated and visualized using a tailored optical imaging system. By using NIR wavelengths, a tissue penetration depth of up to 10 mm can be achieved, allowing the detection of malignant cells below the tissue surface [10].
To improve the outcome of cytoreductive surgery by means of tumor-targeted imaging, proteins that are exclusively overexpressed on the cell surface of EOC cells should be identified [12]. Folate receptor alpha (FRα) is overexpressed in 90–95% of epithelial ovarian cancers [13,14] and has therefore been considered a candidate target for NIRF imaging in EOC [7]. Compared to visual inspection alone, the intraoperative use of OTL-38, a folate analogue conjugated to a fluorophore in the NIR range, resulted in the identification of an additional 29% of metastatic peritoneal lesions in patients with advanced-stage EOC [11]. Unfortunately, eleven out of thirteen resected lymph nodes were false positively illuminated.
This study examines the expression of biomarkers to determine their value as novel targets for the NIRF imaging of metastatic EOC lesions with similar accuracy to FRα, but with improved discrimination between tumor-positive and tumor-negative tissue. Recent studies have shown great improvements in understanding the molecular landscape of epithelial ovarian cancer [15]. We focused on biomarkers that exhibit the various hallmarks of cancer, and for which NIRF probes are already clinically available [16,17]: epidermal growth factor receptor (EGFR) [18], vascular endothelial growth factor-A (VEGF-A) [19,20], integrin αvβ6 [21] and epithelial cell adhesion molecule (EpCAM) [9,22]. L1 cell adhesion molecule (L1CAM) was also included, since previous studies have reported overexpression in EOC [23]. FRα was included as a reference marker.

2.3. Expression of EpCAM, αvβ6 and FRα in Tumor-Negative Tissues

EpCAM, αvβ6 and FRα were detected on the epithelial cells of tumor-negative fallopian tubes (Figure 2D–F), the endometrium (Figure 2G–I) and ovarian inclusion cysts, although EpCAM with lower intensities. Additionally, EpCAM and αvβ6 were expressed with high intensities in the epithelial cells lining the lumen of the small bowel (Figure 2J–K). All other tumor-negative tissue (ovaries, lymph nodes, omentum and peritoneum) showed a complete absence of these markers (Figure 2A–C,L–U).

2.4. Expression of EpCAM, αvβ6 and FRα in Lymph Nodes False-Positively Illuminated with OTL-38

Because the fluorescent folate analogue OTL-38 from the aforementioned study showed false-positive signals in eleven lymph nodes [11], immunohistochemistry was performed on these lymph nodes to determine EpCAM, αvβ6 and FRα expression. All lymph nodes showed a complete absence of these markers (Figure 3).

2.5. Expression of EpCAM, αvβ6 and FRα in Primary Ovarian Tumors and Metastases

The sensitivity, specificity, positive predictive value (PPV), negative predictive value (NPV) and area under the curve (AUC) were calculated for EpCAM, αvβ6 and FRα based on either “overexpression” or “no overexpression” to determine the potential of correctly identifying tumor-positive and tumor-negative lymph nodes in primary debulking samples (Table 2). αvβ6 showed a lower detection potential than EpCAM and FRα, which showed similar statistics. These statistics could not be calculated for interval debulking samples due to a low sample size of lymph node metastases (n = 2).

To determine whether chemotherapy can affect biomarker expression, tissue samples from both primary and interval cytoreductive surgery were included. When comparing both TIS and intensity scores, there was no statistically significant difference in αvβ6 and FRα expression between primary and interval debulking. However, there was a significant difference in EpCAM expression between both groups in metastases, but not in the primary tumors.
In addition, available diagnostic tumor samples (n = 12) before start of NACT from patients in the interval cytoreductive surgery group were immunohistochemically stained for EpCAM, αvβ6 and FRα. Expression patterns before NACT were compared to the remaining vital tumor cells sampled during interval cytoreductive surgery. Although a small decrease was seen in staining intensity for all targets after NACT in the intensity scores bar graphs (Figure 4, Figure 5 and Figure 6), this difference was not statistically significant, suggesting no change in marker expression after being exposed to platinum-based chemotherapeutic agents.

Medical records and tissue specimens were retrospectively reviewed from patients diagnosed with advanced stage EOC (FIGO IIb-IV [2]) who underwent cytoreductive surgery between 2011–2017 at the Leiden University Medical Center (LUMC), The Netherlands. Hematoxylin and eosin stained tissue sections retrieved from the archives of the Department of Pathology were reviewed by a pathologist specializing in gynecologic oncology (TB) to determine the histological subtype and to select the most suitable tissue specimens for immunohistochemical analysis. This resulted in the inclusion of tissue from 42 patients who underwent primary cytoreductive surgery and 42 patients who underwent interval cytoreductive surgery following NACT, of whom a large number of metastatic tissue samples was available. Tissue samples included primary tumors (n = 84), their corresponding omental, peritoneal and lymph node metastases (n = 167) and tumor tissue from diagnostic biopsies before NACT, if applicable (n = 12). Tumor-negative tissue specimens in the primary debulking group originated from patients who underwent a staging procedure because of suspected early-stage EOC. Tumor-negative tissue specimens in the interval debulking group originated from biopsies taken during interval debulking procedures and were therefore subject to NACT. To determine expression in tumor-negative tissue from surrounding structures, samples from the ovaries, fallopian tubes, uterus, omentum, pouch of Douglas, bladder peritoneum, pelvic wall, paracolic gutter, diaphragm, intestine/appendix and lymph nodes were included from all patients (n = 222). Subjects who were alive at the time of the study gave their informed consent for the use of their tissue. This study was conducted in accordance with the Declaration of Helsinki and approved by the Ethics Committee (protocol number B17.025).
Because previous research has indicated heterogenous expression levels of EGFR, VEGF-A and L1CAM in EOC [19,20,32], a pilot staining was primarily conducted. Samples included a selection of primary tumors (n = 5) and tumor-negative peritoneal (n = 3), omental (n = 3) and lymph node (n = 3) tissue.
Additionally, considering the aforementioned false-positivity in lymph nodes reported in a translational study with an FRα targeting probe (OTL-38) by our group [11], these false positive lymph node specimens (n = 11) were immunohistochemically stained for the most promising targets.

Whole formalin-fixed paraffin-embedded (FFPE) tissue blocks were cut into sections of 4 µm thickness. After the deparaffinization of these sections in xylene and rehydration in a stepwise series of alcohol solutions, endogenous peroxidase activity was blocked with 0.3% hydrogen peroxide for 20 min. Deparaffined slides were placed in a 37 °C water bath and incubated with 0.125% trypsin for 30 min to unmask EpCAM epitopes, and with 0.4% pepsin and 1N HCl for 20 min to unmask αvβ6 and EGFR epitopes. VEGF-A epitopes were unmasked by heat induction at 95 °C using citrate buffer (pH 6.0, Dako, Glostrup, Denmark) in a PT-Link module (Agilent, Santa Clara, CA, USA). Antigen retrieval for L1CAM was performed by a 30 min incubation in Tris-EDTA (pH 9.0, Dako, Glostrup, Denmark) pre-heated to 90–100 °C. The slides were then incubated overnight in a humidified chamber at room temperature with previously determined dilutions of primary monoclonal antibodies against EpCAM (0.25 µg/mL), αvβ6 (0.5 µg/mL), EGFR (2.86 µg/mL), VEGF-A (0.25 µg/mL) and L1CAM (1 µg/mL). The slides were then washed in PBS and incubated for 30 min at room temperature with a horseradish peroxidase (HRP)-labelled secondary antibody (anti-mouse or anti-rabbit Envision, Dako). Staining for FRα was performed using an immunohistochemical assay kit according to the manufacturer’s instructions (BioCare Medical, Pacheco, CA, USA). After being rinsed in PBS, the immunoreactions were visualized using DAB substrate buffer (Dako) for 10 min and counterstained using Mayer’s hematoxylin for 15–30 s. After dehydration at 37 °C, the stained slides were mounted with pertex (Leica Microsystems, Wetzlar, Germany). All antibodies and reagents used for immunohistochemical staining can be found in Appendix A.

All immunohistochemically stained slides were scanned using the Ultra-Fast Scanner 1.6 RA (Philips, Eindhoven, The Netherlands). Staining in malignant tissues was evaluated based on membranous expression. Positive expression was scored independently by two blinded observers (L.M. and M.D.), of which a final agreement score was determined. Samples with no agreement were resolved by consensus. The score comprised the total amount of positively stained tumor cells as a percentage of total tumor tissue (proportion score (PS): 0 ≤ 9%, 1 = 10–25%, 2 = 26–50%, 3 = 51–75%, 4 ≥ 76%), and the staining intensity (intensity score (IS): 0 = none, 1 = weak, 2 = moderate, 3 = strong). Examples of staining intensities can be seen in Appendix B. These scores were then multiplied (PS x IS) to give a final total immunostaining score (TIS) of one of nine possible values: 0 = no expression, 1, 2, 3, 4 = weak expression, 6, 8 = moderate expression, 9, 12 = strong expression. Tumor-negative tissue sample scores were based solely on staining intensity as 0 = none, 1 = weak, 2 = moderate, 3 = strong, as the percentage of positively stained tumor cells is not applicable.

In conclusion, our study showed that EpCAM is a potential alternative target for FRα for tumor-specific intra-operative molecular imaging for EOC. Since a high and homogenous expression was detected in primary tumors and metastases, and no false positivity in lymph nodes was observed, EpCAM may contribute to a more reliable detection of metastatic EOC lesions. Further research is needed to determine whether guidance by tumor-targeted molecular imaging will more often lead to the completeness of surgery.

This research was funded by the Zabawas Foundation, a Netherlands Organization for Scientific Research (NWO) VENI grant (91619059) and a Dutch Cancer Society (KWF) grant (UL2015-8089).

The authors gratefully acknowledge Danique C. Assendelft, Shadhvi Bhairosingh and N. Geeske Dekker-Ensink for their practical help. These contributors have no conflict of interest. 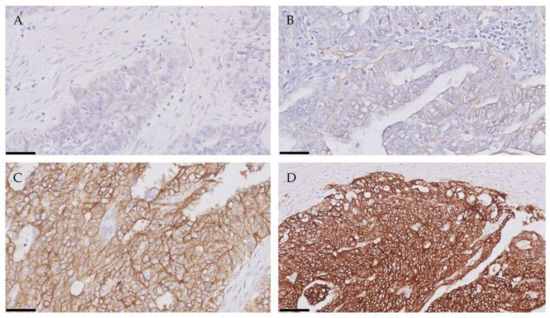 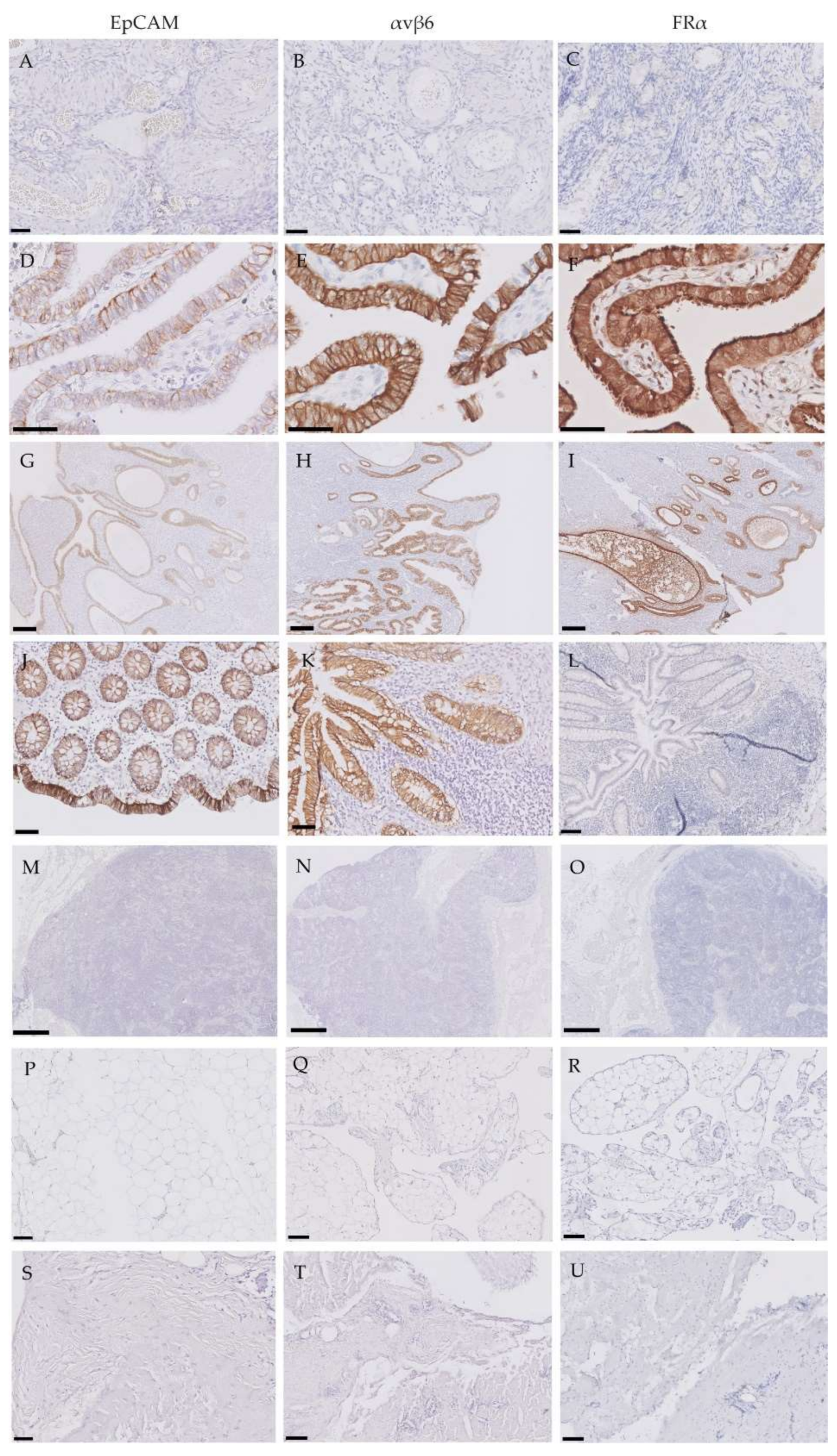 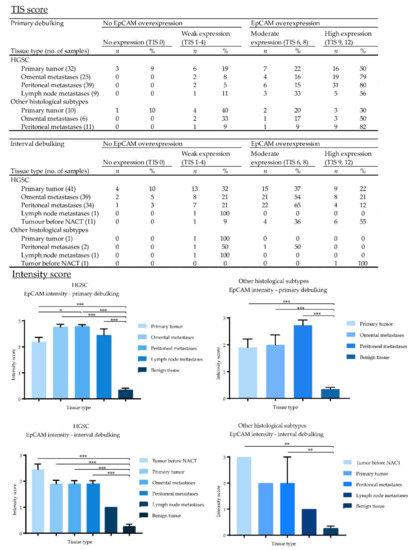 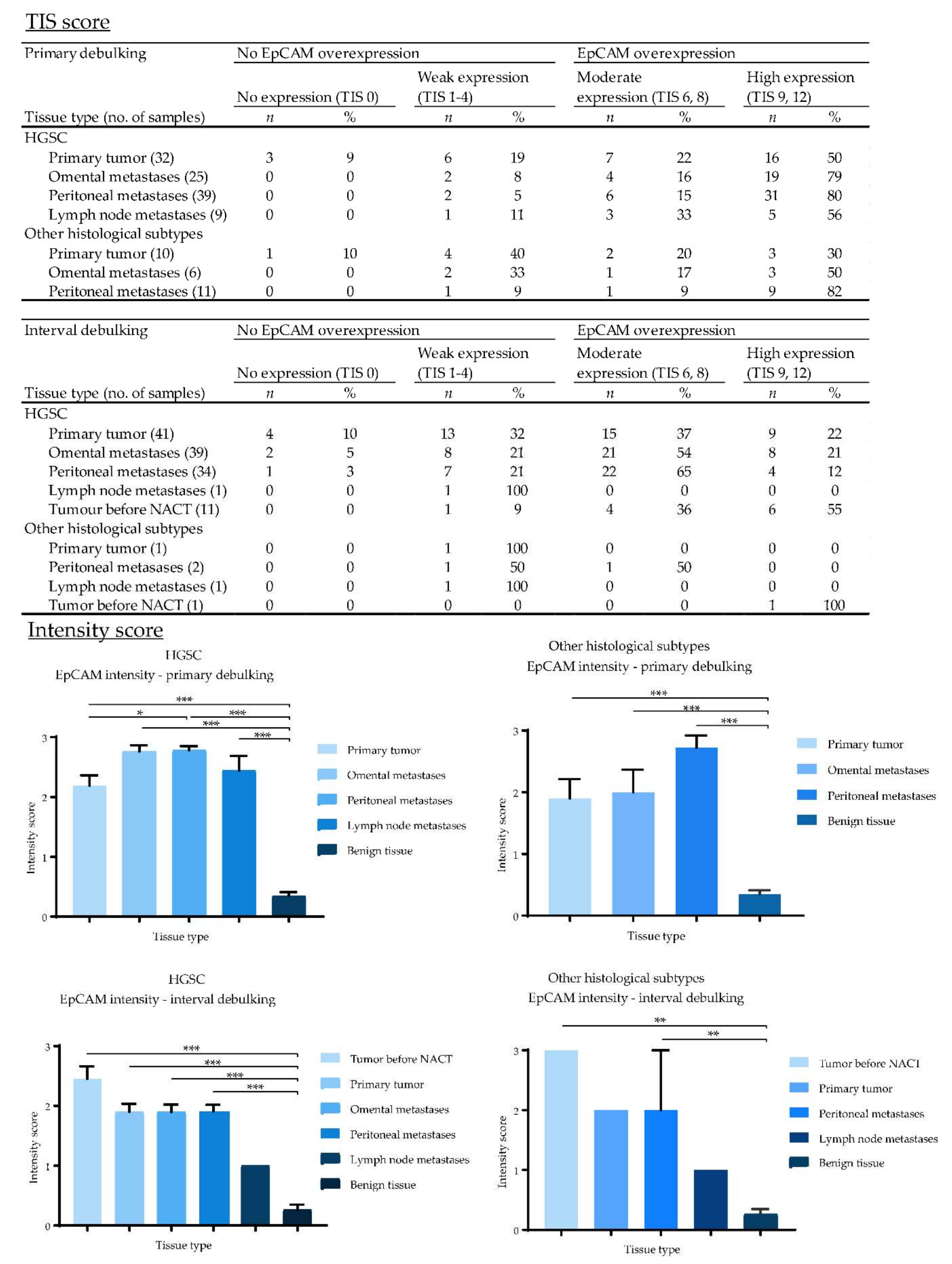 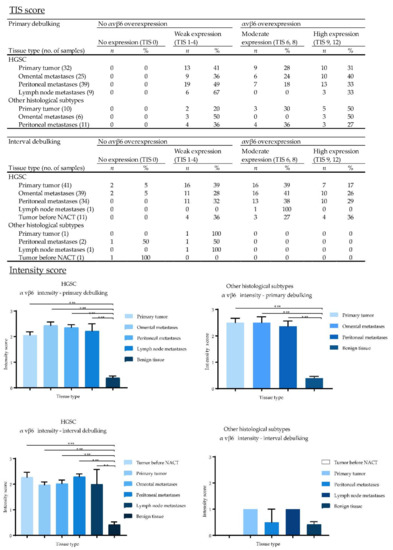