Multiple primary thyroid cancer (TC) and breast cancer (BC) are commonly diagnosed, and the lifetime risk for these cancers is increased in patients with a positive family history of both TC and BC. Although this phenotype is partially explained by TP53 or PTEN mutations, a significant number of patients are negative for these alterations. We judiciously recruited patients diagnosed with BC and/or TC having a family history of these tumors and assessed their whole-exome sequencing. After variant prioritization, we selected MUS81 c.1292G>A (p.R431H) for further investigation. This variant was genotyped in a healthy population and sporadic BC/TC tissues and investigated at the protein level and cellular models. MUS81 c.1292G>A was the most frequent variant (25%) and the strongest candidate due to its function of double-strand break repair. This variant was confirmed in four relatives from two families. MUS81 p.R431H protein exhibited lower expression levels in tumors from patients positive for the germline variant, compared with wild-type BC, and normal breast and thyroid tissues. Using cell line models, we showed that c.1292G>A induced protein instability and affected DNA damage response. We suggest that MUS81 is a novel candidate involved in familial BC/TC based on its low frequency in healthy individuals and proven effect in protein stability.
Keywords: exome sequencing; MUS81; breast cancer; thyroid cancer; functional analysis; familial cancer exome sequencing; MUS81; breast cancer; thyroid cancer; functional analysis; familial cancer

Thyroid cancer (TC) is the most common secondary tumor in patients diagnosed with primary breast cancer (BC) [1,2]. Similarly, BC is reported as the most frequent second primary tumor in TC patients [3,4,5]. The lifetime risk for these cancers is increased in patients with a positive family history of both TC and BC [3,6,7], and clinical cancer surveillance might be appropriate for some of the cases [8]. In a large cohort of 13,798 BC Chinese patients, family history of cancer was the only predictor of secondary TC in BC patients [1]. Studies to investigate mechanisms involved in this association are necessary [9].
Hereditary BC and TC are mainly related to Cowden syndrome in which 30% to 35% of patients are positive for PTEN pathogenic variants [10,11]. Breast cancer is the most frequent cancer in the Li–Fraumeni syndrome tumor spectrum, which is associated with pathogenic variants in TP53 [12]. However, TC is also rarely described in Li–Fraumeni patients [13]. In addition to PTEN and TP53, other candidates were reported as presenting potential predisposition genes associated with familial BC/TC [14,15]. In Cowden or Cowden-like syndromes, SDHx and KLLN genes were reported as modifiers of the phenotype [16,17]. Two variants mapped in PARP4 (p.G496V and p.T1170I) were detected among 14 unrelated individuals diagnosed with both BC and TC [14]. Four Polish founder variants in CHEK2 (1100delC, IVS2+1G>A, del5395, and I157T) were described in TC patients who were also diagnosed with BC or had familial breast cancer history [15].
An association between BC and TC was also described in TC patients treated with surgery and exposed to radioiodine therapy. These patients presented a higher risk of developing a second primary cancer of the breast [18]. A plausible explanation is a deregulation of thyroid hormones (in TC and in other thyroid dysfunctions such as hyperthyroidism and hypothyroidism), which may have pro- and anti-oncogenic properties able to trigger BC development [19]. A recent study based on United States survivors (2000–2015) showed an increased risk of second primary papillary TC for several cancer types, including BC. According to these authors, the risk of developing papillary TC was not clearly associated with the treatment of the first tumor and shared risk factors could explain this association [20]. High-penetrance genes or genetic variants associated with this phenotype are poorly explored, and markers for preventive screening would benefit high-risk patients. Herein, the germline DNA of patients diagnosed with BC and/or TC and familial history of these tumors was whole-exome sequenced to investigate genetic variants potentially associated with hereditary BC and TC.

In a preliminary survey, we evaluated the clinical data and family history of 130 patients with personal and family history of BC and TC. Then, we established the following patient inclusion criteria: index case with non-medullary TC and/or BC with family cancer history of these cancers AND at least two first- or second-degree relatives with one of these cancers developed before the age of 45 OR the index case plus one first-degree relative affected with one of these cancers with age of cancer onset lower than 40 years old. Exclusion criteria comprised female patients diagnosed with TC and a previous history of BC treated by radiotherapy. Medullary thyroid cancer was excluded due to its association with familial medullary thyroid carcinoma syndrome associated with RET mutations (OMIM155240).
Based on these criteria, we selected 20 unrelated patients with a personal and family history of TC and/or BC, which were followed prospectively at the Department of Oncogenetics of the A.C. Camargo Cancer Center, Sao Paulo, Brazil. Subjects provided written informed consent following the Declaration of Helsinki and were advised of the procedures. The study was approved by the institutional Human Research Ethics Committee (FMB-PC-197/2012; CEP1175/08ext).
The medical records reported results of genetic testing for three patients as follows: one patient was tested for TP53 p.R337H (Brazilian founder mutation for Li–Fraumeni syndrome [59]) and was negative for this variant; one patient tested negative for TP53 whole-gene, but there was no technical detail; one patient with a putative diagnosis of Cowden syndrome was negative for PTEN variants with no further details.
Patients were identified with an alphanumeric character being either F (family with more than one patient assessed by exome sequencing), M (patients positive for MUS81 c.1292G>A p.R431H), or W (patients MUS81 wild-type), followed by Hindu-Arabic numerals (1–20). Clinical features and cancer family history of the index cases are detailed in Table S1.

Paired-end (PE) raw sequencing data were constructed and sequenced using the Illumina HiSeq 2000 platform (Illumina Inc, San Diego, CA, USA). Read length was 100 bp. PE raw sequencing data had the adaptors trimmed using TrimGalore with default parameters in paired-end mode (https://www.bioinformatics.babraham.ac.uk/), and reads were aligned to the GRCh37/hg19 human reference assembly using BWA-mem version 0.7.15 with default parameters [60]. Duplicate reads (multiple reads that start and end at the same position potentially due to amplification artefacts) were flagged using SAMBAMBA markdup (https://lomereiter.github.io/sambamba/), and base quality scores of the aligned reads were recalibrated using GATK v3.6-0 [61]. Alignment statistics were obtained with Picard (http://picard.sourceforge.net/), SAMtools samtools [62], GATK, and BAMtools (https://github.com/pezmaster31/bamtools). Variants were called with GATK HaplotypeCaller in gVCF mode and genotypes were called for the entire cohort using GATK genotypeGVCFs. Variants were annotated using ANNOVAR [63] and Varseq v2.x (Golden Helix, Inc., Bozeman, MT, USA, www.goldenhelix.com).
We excluded variants as follows: (1) synonymous; (2) observed in more than 2% of the analyzed alleles in GnomAD or AbraOM [64]; (3) with allele fraction <30% (fraction of reads supporting the variant); (4) variants with <10 reads for SNPs and <10 reads for INDELs; (5) variants not shared by all individuals of the same family. This last criterion (5) was adopted for variants detected in the families F1 (W6, W6-1, and W6-2) and F2 (W7 and W7-1).
In silico prediction tools were used to classify the variants and their pathogenicity score. For missense and loss-of-function variants to be predicted as pathogenic in silico, we used CADD with the threshold > 20 [65], while for splice site we used Ada and RF, with the threshold > 0.6 [66]. We also excluded variants classified as benign in ClinVar. We then flagged genes ranked according to high mutation burden due to extensive gene length [24]. From a total of 3855 remaining variants, we focused on variants mapped in cancer-related genes [18,19], recurrently altered genes, and recurrent variants detected in more than one patient/family. A summary of variant prioritization is described in Figure S1. The relationship between the 17 cancer-related genes and MUS81 was illustrated in a PPI network using data from the IID v. 2018-11 [27] (http://ophid.utoronto.ca/iid). We retrieved all direct physical interactions (experimentally identified in human, orthologs from other organisms, and computationally predicted). Final network was visualization using NAViGaTOR version 3.13 [67]. We also used the 17 cancer-related genes and MUS81, to perform a pathway enrichment analysis using PathDIP version 4.0.21.2 (Database version 4.0.7.0) [28]. An adjusted p-value was obtained using Bonferroni correction at a significance level <0.05.

We interrogated publicly available databases to assess copy number alteration and DNA methylation as a potential mechanism involved in MUS81 gene expression. Invasive ductal breast carcinomas (BC) (N = 678) plus adjacent normal tissues (N = 85), and papillary thyroid carcinoma (PTC) (N = 188) plus adjacent normal tissues (N = 21) were obtained from the UCSC Xena (https://xena.ucsc.edu) and cBioPortal (https://www.cbioportal.org) (both accessed on 8 April 2020). Only samples with available copy number alteration, gene expression, and methylation status were selected. Homozygous deletion, single copy deletion, diploid normal copy, low-level copy number amplification, and high-level copy number amplification were identified by the GISTIC algorithm, which combines the frequency and amplitude of an aberration to rates each segment and apply a permutation test to assess the statistical significance. From TCGA (The Cancer Genome Atlas) level 3, we obtained the RNA-seq data, with values log2(x + 1) transformed and normalized and methylation (Illumina450K) with beta values ranging from 0–1. Probes that were shown to be cross-reactive and SNP-affected were filtered out. Data analysis and visualization were conducted with statistical and graphical packages available from R. Furthermore, using the aforementioned TCGA BC and PTC and additional 50 PTC paired with the adjacent tissue [51], we investigated methylation probes within and outside CpG island sites of the MUS81 region. We evaluated both copy number alteration and methylation in relation to MUS81 expression.

Using the whole-exome sequencing approach, we were able to identify pathogenic and likely pathogenic variants in cancer-related genes and a novel variant mapped to the DNA repair gene MUS81 associated with familial TC and BC cases. The MUS81 c.1292G>A variant was confirmed using Sanger sequencing in the index cases and their relatives. This variant was found in low frequency in an independent set of sporadic TC and BC compared to our familial cohort, as well as in healthy individuals. Applying immunohistochemistry and functional analyses, we demonstrated that MUS81 c.1292G>A disrupts protein stability and affects DNA damage response. According to our in silico PPI analysis, MUS81 is predicted to interact directly or indirectly with other cancer-related genes, which might also impact the gene penetrance. Based on these data, we suggest that MUS81 plays a role in the predisposition of familial BC and TC. Other studies are necessary in a large number of cases to confirm this association.

The authors would like to thank the patients and their relatives who participated in this study and the Nucleic Acid Bank of A.C. Camargo Cancer Center (São Paulo, Brazil) for sample processing. The authors are grateful for the assistance given by Hellen Kuasne, Isabela A. Ortiz, and Richard C. Garratt. S.R.R. received investigator fellowship awards from CNPq-BR. The TPC1 cell line was kindly provided by Janete Maria Cerutti (Brazil). 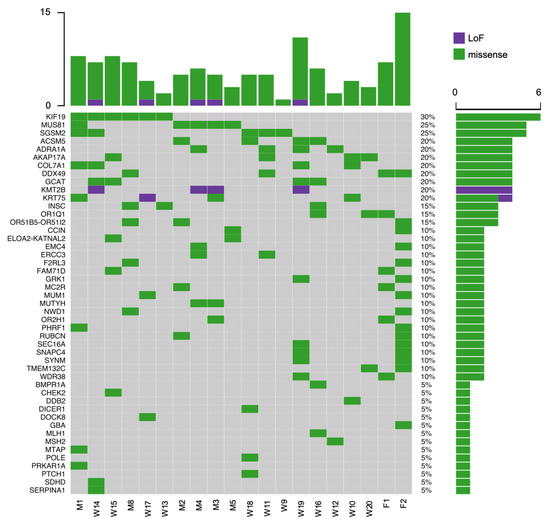 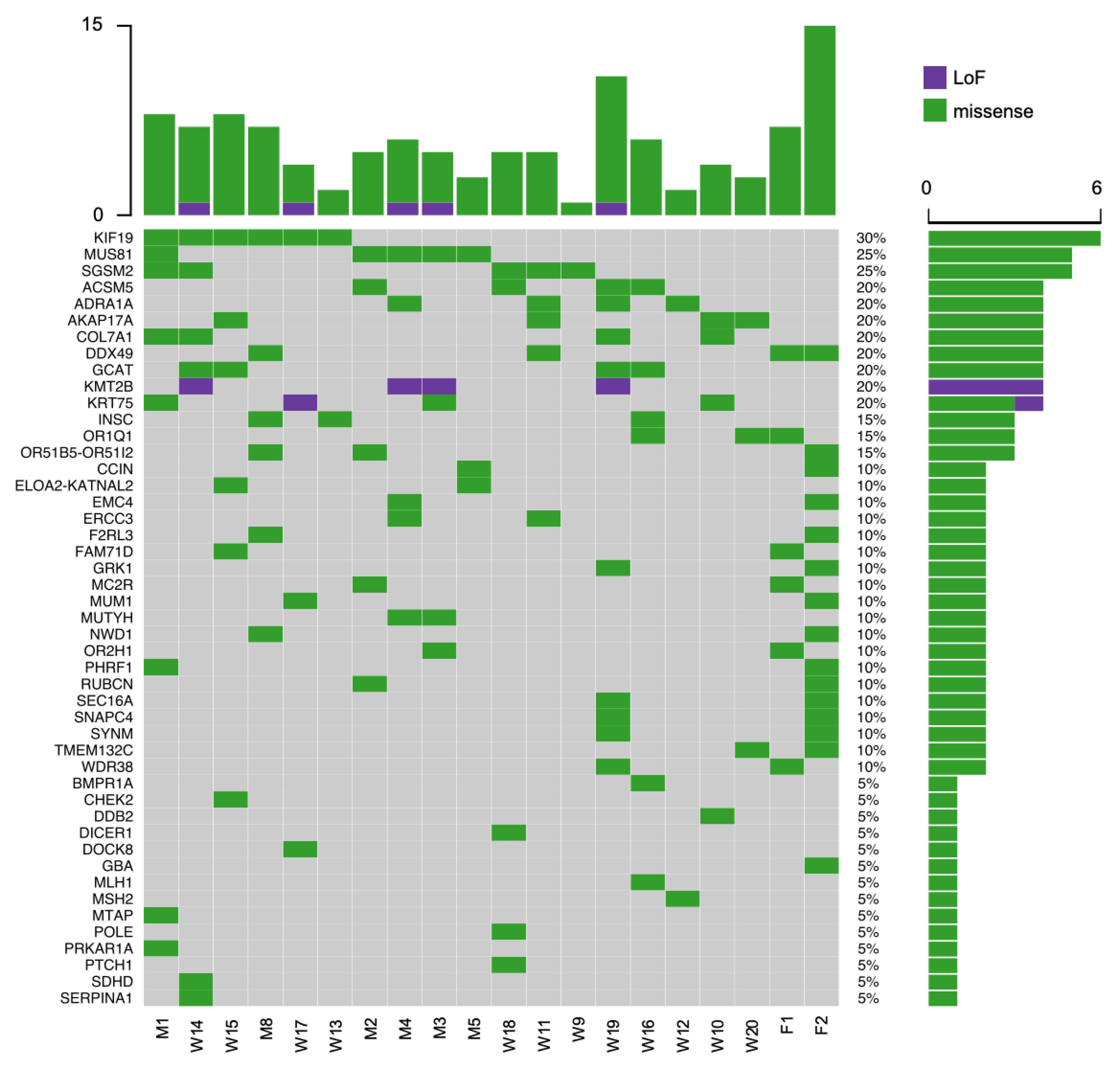 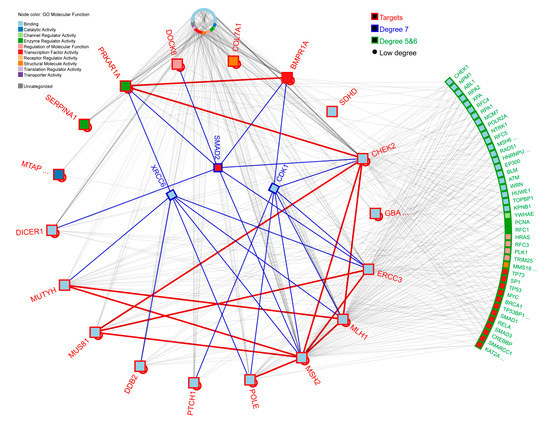 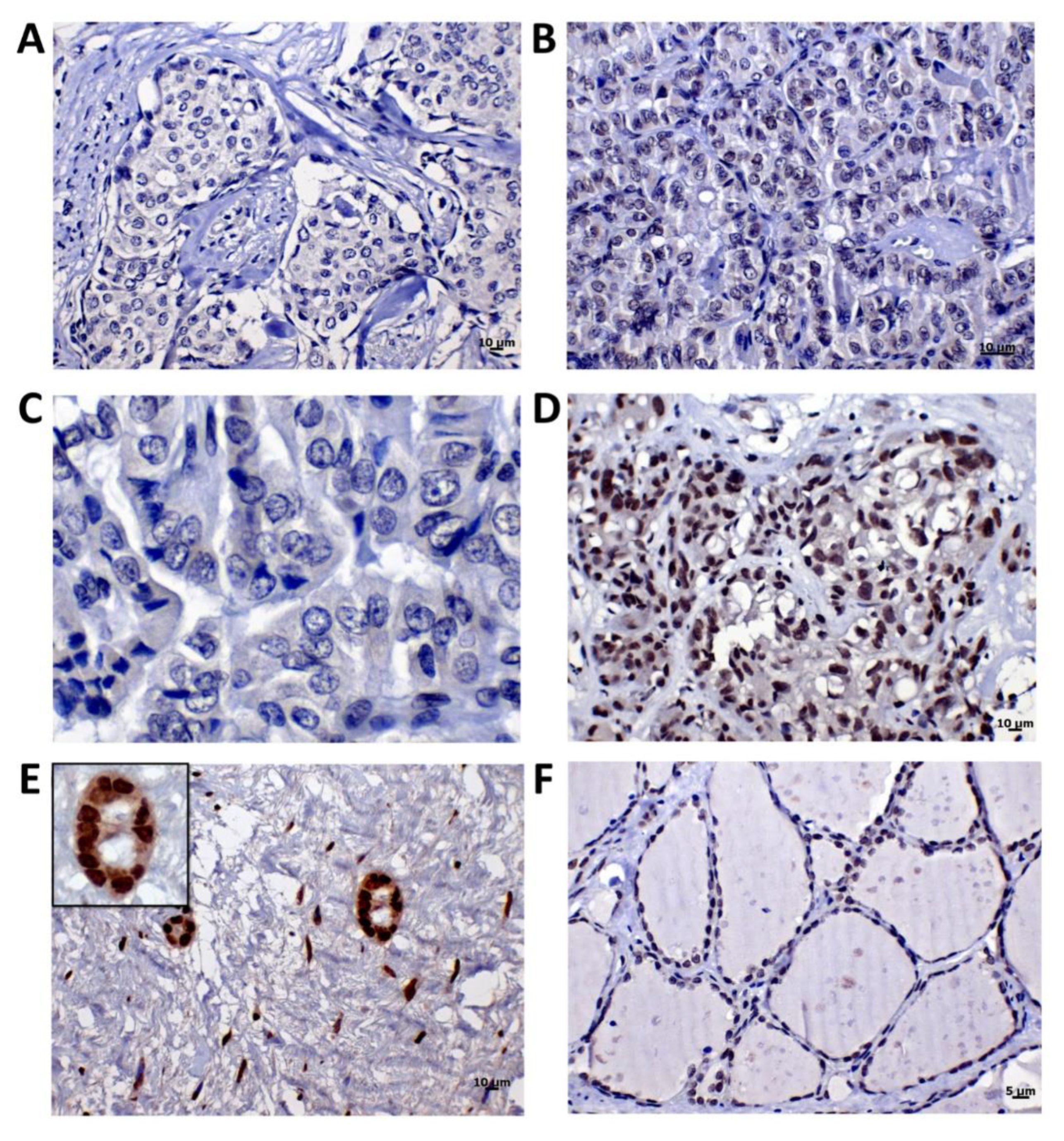