Background: Breast cancer (BC) is a heterogeneous disease for which the commonly used chemotherapeutic agents primarily include the anthracyclines (doxorubicin, epirubicin), microtubule inhibitors (paclitaxel, docetaxel, eribulin), and alkylating agents (cyclophosphamide). While these drugs can be highly effective, metastatic tumours are frequently refractory to treatment or become resistant upon tumour relapse. Methods: We undertook a cell polarity/epithelial mesenchymal plasticity (EMP)-enriched short hairpin RNA (shRNA) screen in MDA-MB-468 breast cancer cells to identify factors underpinning heterogeneous responses to three chemotherapeutic agents used clinically in breast cancer: Doxorubicin, docetaxel, and eribulin. shRNA-transduced cells were treated for 6 weeks with the EC10 of each drug, and shRNA representation assessed by deep sequencing. We first identified candidate genes with depleted shRNA, implying that their silencing could promote a response. Using the Broad Institute’s Connectivity Map (CMap), we identified partner inhibitors targeting the identified gene families that may induce cell death in combination with doxorubicin, and tested them with all three drug treatments. Results: In total, 259 shRNAs were depleted with doxorubicin treatment (at p < 0.01), 66 with docetaxel, and 25 with eribulin. Twenty-four depleted hairpins overlapped between doxorubicin and docetaxel, and shRNAs for TGFB2, RUNX1, CCDC80, and HYOU1 were depleted across all the three drug treatments. Inhibitors of MDM/TP53, TGFBR, and FGFR were identified by CMap as the top pharmaceutical perturbagens and we validated the combinatorial benefits of the TGFBR inhibitor (SB525334) and MDM inhibitor (RITA) with doxorubicin treatment, and also observed synergy between the inhibitor SB525334 and eribulin in MDA-MB-468 cells. Conclusions: Taken together, a cell polarity/EMP-enriched shRNA library screen identified relevant gene products that could be targeted alongside current chemotherapeutic agents for the treatment of invasive BC. View Full-Text
Keywords: chemotherapy resistance; combination chemotherapy; doxorubicin; docetaxel; eribulin; TGFBR; FGFR; MDM; TP53; shRNA library screening chemotherapy resistance; combination chemotherapy; doxorubicin; docetaxel; eribulin; TGFBR; FGFR; MDM; TP53; shRNA library screening
►▼ Show Figures 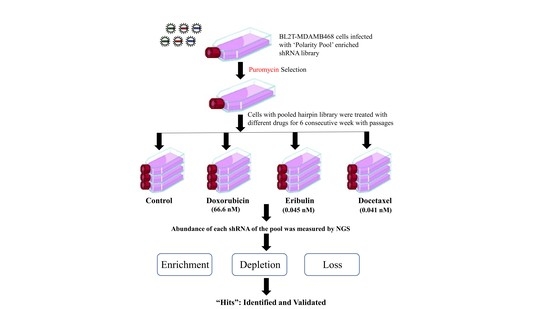