Breast cancer (BCa) cells disseminating to the bone can remain dormant and resistant to treatments for many years until relapsing as bone metastases. The tyrosine kinase receptor TIE2 induces the dormancy of hematopoietic stem cells, and could also induce the dormancy of BCa cells. However, TIE2 is also a target for anti-angiogenic treatments in ongoing clinical trials, and its inhibition could then restart the proliferation of dormant BCa cells in bone. In this study, we used a combination of patient data, in vitro, and in vivo models to investigate the effect of TIE2 in the dormancy of bone metastases. In BCa patients, we found that a higher TIE2 expression is associated with an increased time to metastases and survival. In vitro, TIE2 decreased cell proliferation as it increased the expression of cyclin-dependent kinase inhibitors CDKN1A and CDKN1B and arrested cells in the G0/G1 phase. Expression of TIE2 also increased the resistance to the chemotherapeutic 5-Fluorouracil. In mice, TIE2 expression reduced tumor growth and the formation of osteolytic bone metastasis. Together, these results show that TIE2 is sufficient to induce dormancy in vitro and in vivo, and could be a useful prognostic marker for patients. Our data also suggest being cautious when using TIE2 inhibitors in the clinic, as they could awaken dormant disseminated tumor cells. View Full-Text
Keywords: breast cancer; bone metastasis; dormancy; TIE2; chemotherapy resistance; cancer relapse breast cancer; bone metastasis; dormancy; TIE2; chemotherapy resistance; cancer relapse
►▼ Show Figures 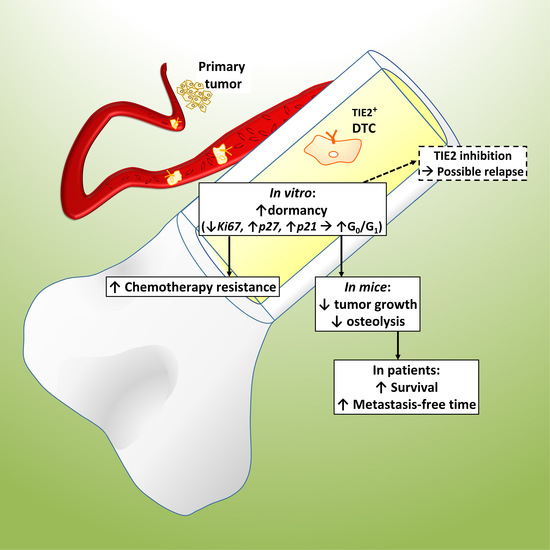