Over the past decade, immune checkpoint inhibitors have revolutionized the treatment of non-small cell lung cancer (NSCLC). Unfortunately, not all patients benefit from PD-(L)1 blockade, yet, the PD-L1 tumor cell expression is the only approved biomarker, and other biomarkers have been investigated. In the present study, we analyzed the presence of immunomodulatory molecules: PD-L1, CD47, CD73, Fas, and FasL on mature tumor cells (MTCs) and cancer stem cells (CSCs) in lymph nodes (LNs) aspirates and refer it to the lymphocyte subpopulation in peripheral blood (PB). PB samples and LNs aspirates obtained during the endobronchial ultrasound-guided transbronchial needle aspiration (EBUS/TBNA) procedure of 20 patients at different stages of NSCLC. The cells were analyzed by multiparameter flow cytometry. We reported the higher frequency of MTCs and CSCs expressing the investigated immunomodulating molecules in metastatic LNs than in nonmetastatic. The expression of CD47 and PD-L1 was significantly higher on CSCs than on MTCs. Among the lymphocyte subpopulation in PB, we observed a higher frequency of PD-1+ CD8 T cells and Fas+ CD8 T cells in patients with confirmed metastases than in nonmetastatic. Next, we found that the percentage of FasL+ MTCs correlated with the frequency of Fas+ CD3 T cells in LNs aspirates and Fas+ CD8 T cells in PB. Finally, we found that patients with metastatic disease had a significantly higher FasL+/Fas+ MTCs ratio than patients with nonmetastatic disease. Both MTCs and CSCs express different immunomodulatory molecules on their surface. The frequency of FasL+ MTCs associates with altered distribution of Fas+ lymphocyte subpopulations in LNs and PB.
Keywords: lung cancer; cancer stem cells; immune checkpoint inhibitors; EBUS/TBNA lung cancer; cancer stem cells; immune checkpoint inhibitors; EBUS/TBNA

Lung cancer remains the leading cause of cancer-related death worldwide [1,2]. Although small improvements have been made in the treatment of non-small cell lung cancer (NSCLC) over past decades, the efficacy of the new immunotherapy methods targeting immune checkpoints has been recently demonstrated in about 40% of patients [3,4]. More accurate biomarkers for individual therapy are needed.
Cancer stem cells (CSCs) are small numbers of cells that exist in the tumor microenvironment (TME) and hold stemness properties that sustain cancer progression, such as enhanced capacities for self-renewal cloning, growing, metastasizing, homing, and reproliferating [5]. Lung cancer TME is composed of a complex group of noncancer cells, such as stromal cells, tumor-associated macrophages, tumor-infiltrating lymphocytes, regulatory T cells, myeloid-derived suppressor cells, dendritic cells, NK cells, and natural killer T cells along with cancer cells: CSCs and mature tumor cells (MTCs). There are different accepted definitions for MTCs and CSCs regarding the surface markers they express. In the current state of knowledge, lung MTCs are described as CD45-/EpCAM+/CXCR4+ [6,7]. Lung CSCs are defined as CD45-/EpCAM+/CXCR4+/CD44+/CD133+/CD90+ [8,9,10,11]. It is considered that CSCs are responsible for recruiting noncancer cells to TME [12]. However, the interplay between CSCs and noncancer cells in TME, as well as interactions of CSCs with the immune system in the systemic circulation, is not fully understood. While there have been enormous advances in the understanding of the immunoediting process in the TME and its prognostic significance, less is known about changes in the regulatory mechanisms at the level of the LNs [13,14]. LNs are common sites of metastasis. Cancer cells that have metastasized to LNs may express immunosuppressive molecules and escape immune detection. Similar to primary TME, MTCs in metastatic LNs shape their interactions with the host immune system by controlling the infiltration and reactivity of immune cells [14]. At present, little is known about the frequency of immunomodulatory molecules on MTCs and CSCs in metastatic LNs in NSCLC patients.
As tumors develop, they acquire mechanisms to avoid attenuation by the immune system [15]. T cells play a key role in anticancer defense, but their population is modulated during the development of the disease [16]. The numerous suppressory and regulatory mechanisms inhibit the recognition of lung cancer antigens and are capable of blocking lymphocyte activation [17]. The strong suppressory pathway is the programmed death-1/programmed death ligand-1 (PD-1/PD-L1) pathway. Understanding these mechanisms can lead to the development of new strategies that provoke the immune system to recognize lung cancer as foreign. The success of checkpoint inhibitors creates interest in evaluating other antibodies that can be used to modulate T cell responses and/or enhance the ability of the immune system to destroy the tumor cells.
In our previous study, we confirmed the presence of PD-L1+ CSCs in metastatic LNs in NSCLC patients that may suggest their immunosuppressive properties [18]. This study aimed to evaluate the presence of immunosuppressing molecules: PD-L1, CD47, CD73, Fas (CD95), and FasL (Fas Ligand) on CSCs and MTCs in LNs aspirates, and to evaluate the presence of PD-1 (programmed death receptor 1), Fas, and LAG3 (Lymphocyte-activation gene 3) on CD4 T cells and CD8 T cells in systemic circulation in NSCLC patients (Figure 1); based on the examination of the endobronchial ultrasound-guided transbronchial needle aspiration (EBUS/TBNA) technique and the peripheral blood (PB) from the same patient.

The study group consisted of patients consecutively enrolled during diagnostic procedures for lung tumors. We qualified patients without any type of previous or recent anticancer therapy, clinical signs of infection, autoimmune diseases, or immunosuppressive treatment. Finally, only patients with histologically confirmed lung cancers were included in the study groups (n = 20). The current histological and TNM classification of lung cancer was used [19]. Each patient had provided written informed consent before EBUS/TBNA (the Medical University of Warsaw Ethics Committee: KB/230/2016). The group was divided according to the presence of LNs metastases confirmed histopathologically. The clinical characteristic of the lung cancer patients is summarized in Table A1.
Molecular analysis was performed in 12 patients with adenocarcinoma or NOS (not otherwise specified). In five patients, an activated mutation of EGFR was confirmed, in two other patients, a rearrangement of ALK/EML4, and in two patient KRAS mutations were found.

2.2. MTCs and CSCs Frequencies in Peripheral Blood and LNs Aspirates

The gating strategy for MTCs and CSCs is presented in Appendix A Figure A2.

The identification of circulating MTCs and circulating CSCs was performed in 5 patients. The amount was too low to perform a proper analysis, and we decided not to conduct further analysis of MTCs and CSCs in PB in subsequent patients.

2.3. MTCs and CSCs Express Different Immunomodulatory Molecules on Their Surface

We examined the expression of PD-L1, CD47, CD73, Fas, and FasL on MTC and lung CSCs in LNs aspirates. Representative histograms used to assess the presence of immunomodulatory molecules on CSCs are presented in Appendix A Figure A1. The frequencies of immunomodulatory molecules on MTCs were assessed in the same manner.
The cell frequencies and the GMF (geometric mean fluorescence) intensity of PD-L1, CD47, CD73, Fas, and FasL on MTCs and CSCs are presented in Table A1.
Next, we compared the expression (GMF) of examined immunomodulatory molecules on CSCs and MTCs. We found that the PD-L1 and CD47 expression was increased on CSCs compared to MTCs (2246 vs. 1489; 2589 vs. 1346, respectively, p < 0.05) (Figure 2). We did not report any significant differences between the expression of Fas, FasL, and CD73 on CSCs and MTCs.

2.4. Frequencies of Lymphocyte Subsets in PB

Flow cytometry analysis allowed assessing the presence of Fas and FasL on MTCs, CSCs, and T cells in LNs aspirates. Percentage of FasL+ MTCs correlated with Fas+ CD3 T cells in LNs aspirates (r = 0.8667; p < 0.05) (Figure 4A). We did not observe any significant correlations between FasL+ CSCs and Fas+ CD3 cells in LNs aspirates.
Next, we checked if there are significant dependencies between FasL+ MTCs, FasL+ CSCs in LNs, and Fas+ lymphocyte subsets in PB. We found that the percentage of FasL+ MTCs in LNs was correlated with the frequency of Fas+ CD8 T cells in PB (r = 0.7659; p < 0.05) (Figure 4B). No significant correlation between FasL+ CSCs in LNs and Fas+ T cells in PB was observed.
Finally, we observed that FasL+/Fas+ MTCs ratio in LNs differs between patients with metastatic and nonmetastatic disease. We found that patients with metastatic disease have a significantly higher FasL+/Fas+ MTCs ratio than patients with nonmetastatic disease (21.89 vs. 7.85; p < 0.05). Interestingly, the highest FasL+/Fas+ MTCs ratio was observed in patients with IV stage of the disease (Figure 5).

We obtained 2 ml of peripheral blood (PB) and placed it in tubes containing K2EDTA and processed for flow cytometry.
LNs group 4, 7, 10, and 11 aspirates were obtained during routine EBUS/TBNA procedure of lung cancer diagnosis. After diagnostic aspiration, the additional sample was taken for flow cytometry analysis. About 1 ml of LNs aspirate was diluted in 0.9% NaCl, collected in tubes containing K2EDTA, and processed for flow cytometry.
To identify MTCs flow cytometry and staining using monoclonal antibodies targeting the cell-surface expression of CD45 (V450), EpCAM (FITC) and CXCR4 (APC) were used (BD, USA). MTCs were defined as CD45-/EpCAM+/CXCR4+. CSCs population was determined by a panel of monoclonal antibodies: EpCAM (FITC), CD133 (PE), CD90 (PE-Cy7), CXCR4 (APC), CD44 (APC-H7), and CD45 (V500). CSCs were defined as: CD45-/CXCR4+/EpCAM+/CD133+/CD44+/CD90+.
Additionally, anti-PD-L1 (PerCP-Cy5.5), anti-CD47 (PerCP-Cy5.5), anti-CD73 (PerCP-Cy5.5), anti Fas (PerCP-Cy5.5), and FasL (V450) antibodies were applied to assess the presence of these molecules on MTC and CSCs in LNs aspirates.
The proportion of CD4+ or CD8+ subpopulations in PB and LNs aspirates were determined by a panel of monoclonal antibodies: anti CD45 (V500), anti CD3 (APC-H7), anti CD8 (V450), and anti CD4 (PE-Cy7).
Additionally, anti-PD-1 (FITC), anti-Fas (PerCP-Cy5.5), and anti-Lag3 (PE) antibodies were applied to assess the presence of these molecules on CD4 and CD8 T cells in PB. Briefly, preparation for flow cytometry was as follows: to each cytometric tube, 100 μL of LNs aspirate or PB and 4 μL of specific monoclonal antibodies were added. After 15 min of incubation in the dark, at room temperature, erythrocytes were lysed with lysing solution for 10 min and washed with 2% newborn calf serum in physiological buffer solutions (PBS). The cells were subsequently fixed in PBS. The samples were processed by the FACS Canto II flow cytometer (BD, USA). Geometric mean fluorescence (GMF) intensity of PD-L1, CD47, CD73, Fas, and FasL on MTCs and CSCs was measured. The analysis was performed using BD FACSDiva™ Software (BD, USA)
For the statistical analysis, the Mann–Whitney U-test was performed to: compare the differences between patients with confirmed metastases in LNs and patients without metastases, and compare the differences between the expression of immunomodulatory molecules on CSCs and MTCs. Correlation analyses were performed by calculating the Pearson r coefficient. Differences were considered statistically significant when p < 0.05. All analyses were performed using Prism (Version 5, GraphPad Software, La Jolla, CA, USA).

In conclusion, we reported the higher frequency of MTCs and CSCs expressing investigated immunomodulating molecules in metastatic LNs than in nonmetastatic. Moreover, we found some significant dependencies between FasL+ MTCs and Fas+ lymphocytes in LNs aspirates and PB. Additionally, we confirmed the utility of flow cytometric analysis of EBUS/TBNA samples in assessing the presence of metastases and cellular composition of LNs in NSCLC patients. 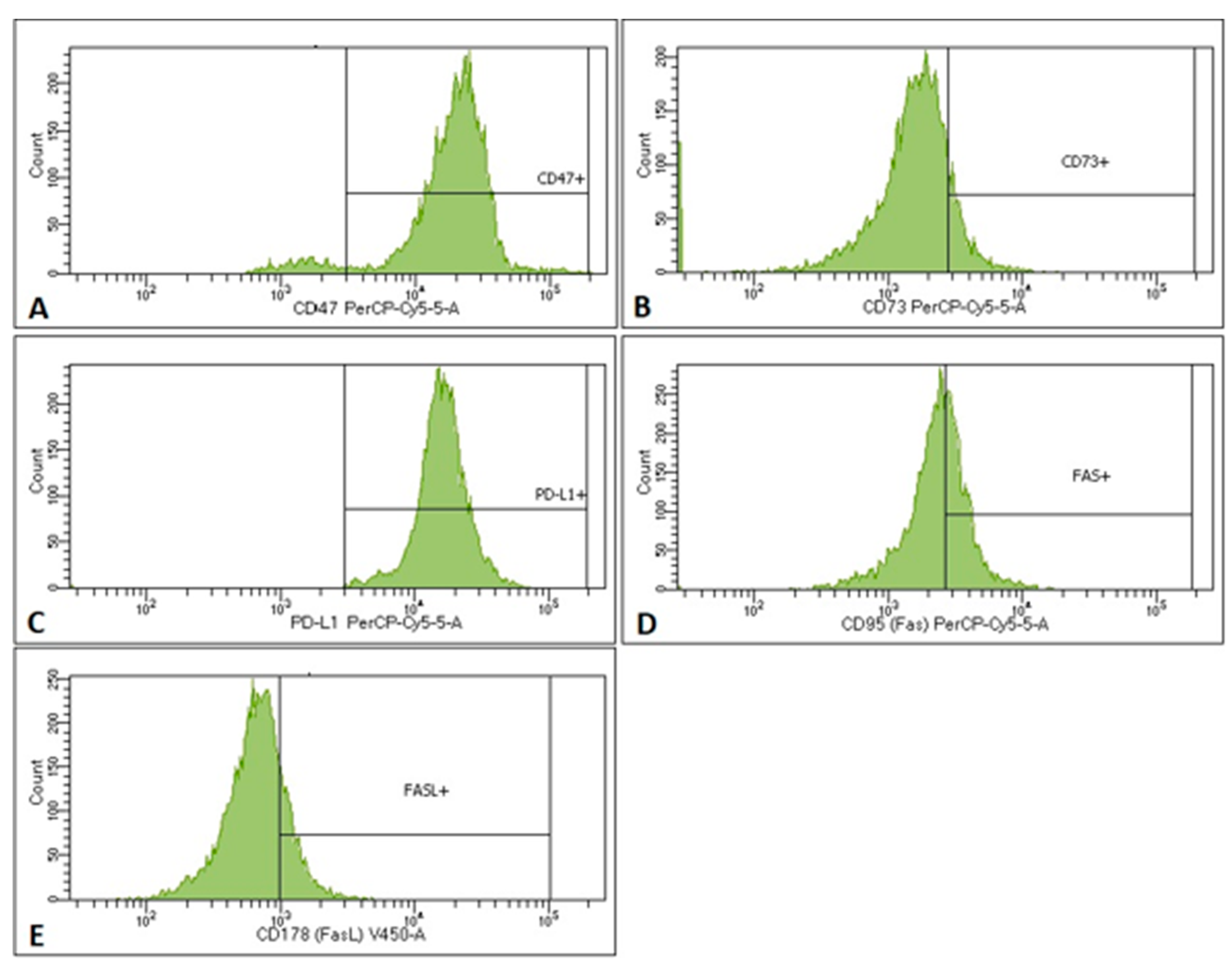 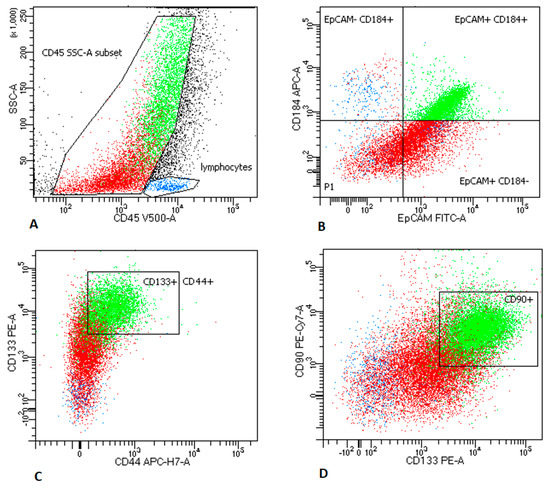 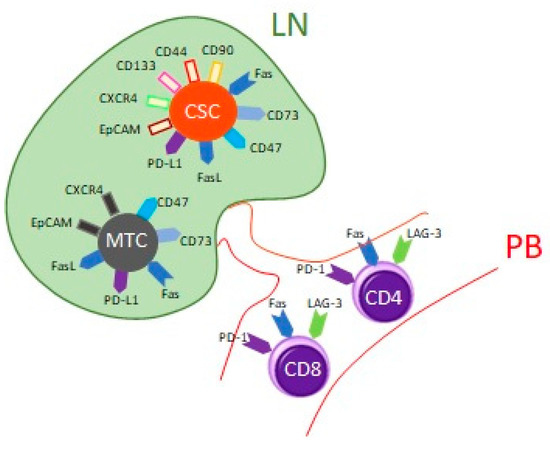 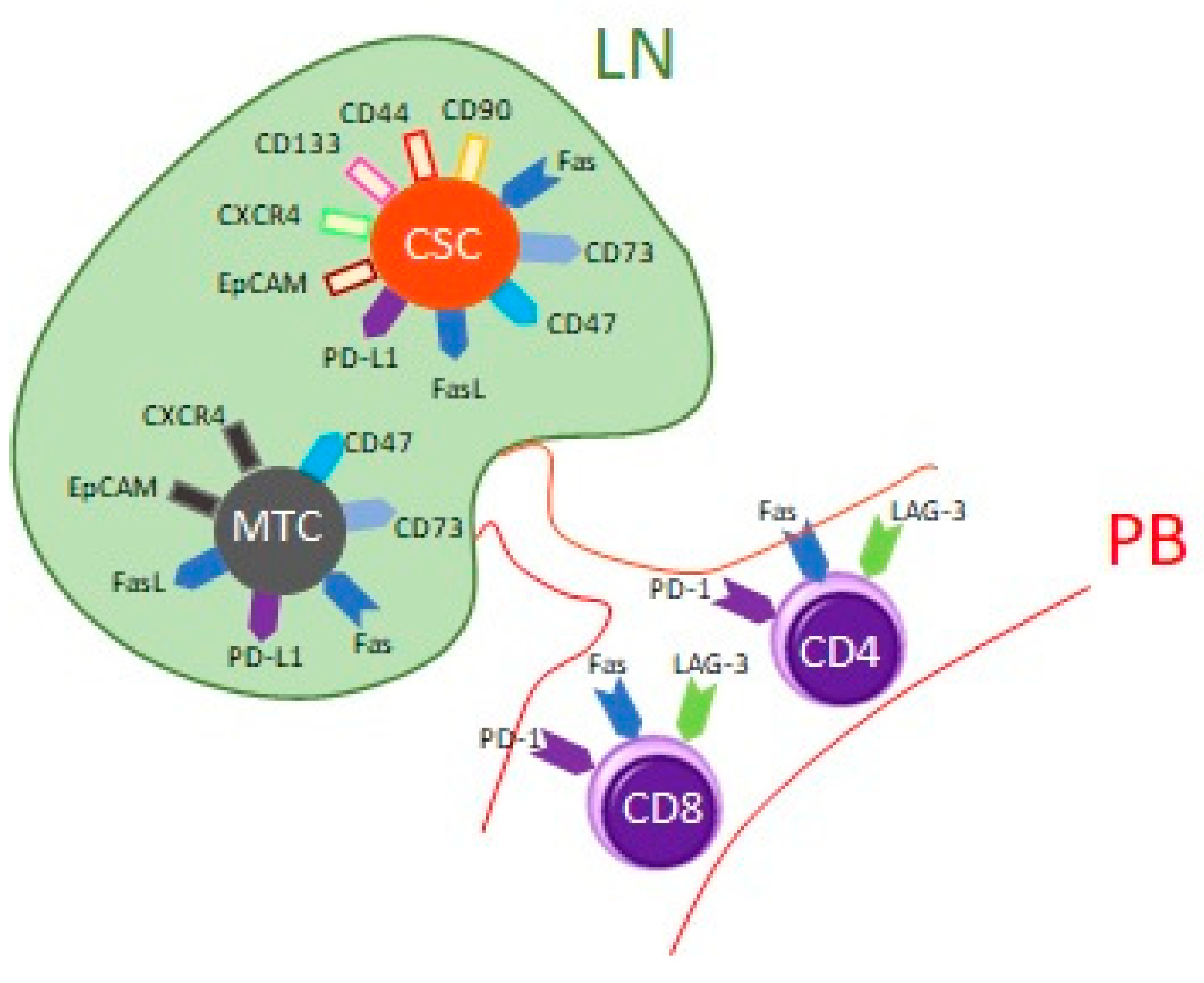