Cancer Stem Cells and the Slow Cycling Phenotype: How to Cut the Gordian Knot Driving Resistance to Therapy in Melanoma

Melanoma cells reside in a complex stromal microenvironment, which is a critical component of disease onset and progression. Mesenchymal or fibroblastic cell type are the most abundant cellular element of tumor stroma. Factors secreted by melanoma cells can activate non-malignant associated fibroblasts to become melanoma associate fibroblasts (MAFs). MAFs promote tumorigenic features by remodeling the extracellular matrix, supporting tumor cells proliferation, neo-angiogenesis and drug resistance. Additionally, environmental factors may contribute to the acquisition of pro-tumorigenic phenotype of fibroblasts. Overall, in melanoma, perturbed tissue homeostasis contributes to modulation of major oncogenic intracellular signaling pathways not only in tumor cells but also in neighboring cells. Thus, targeted molecular therapies need to be considered from the reciprocal point of view of melanoma and stromal cells.

The development of a modified stromal microenvironment in response to neoplastic onset is a common feature of many tumors including cutaneous melanoma. At all stages, melanoma cells are embedded in a complex tissue composed by extracellular matrix components and several different cell populations. Thus, melanomagenesis is not only driven by malignant melanocytes, but also by the altered communication between melanocytes and non-malignant cell populations, including fibroblasts, endothelial and immune cells. In particular, cancer-associated fibroblasts (CAFs), also referred as melanoma-associated fibroblasts (MAFs) in the case of melanoma, are the most abundant stromal cells and play a significant contextual role in melanoma initiation, progression and metastasis. As a result of dynamic intercellular molecular dialogue between tumor and the stroma, non-neoplastic cells gain specific phenotypes and functions that are pro-tumorigenic. Targeting MAFs is thus considered a promising avenue to improve melanoma therapy. Growing evidence demonstrates that aberrant regulation of oncogenic signaling is not restricted to transformed cells but also occurs in MAFs. However, in some cases, signaling pathways present opposite regulation in melanoma and surrounding area, suggesting that therapeutic strategies need to carefully consider the tumor–stroma equilibrium. In this novel review, we analyze four major signaling pathways implicated in melanomagenesis, TGF-β, MAPK, Wnt/β-catenin and Hyppo signaling, from the complementary point of view of tumor cells and the microenvironment. View Full-Text
Keywords: melanoma; cancer associated fibroblast; tumor microenvironment; melanomagenesis melanoma; cancer associated fibroblast; tumor microenvironment; melanomagenesis
►▼ Show Figures 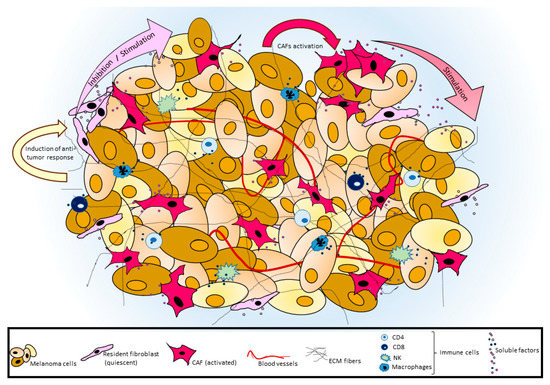