Mucosal melanoma is a rare disease epidemiologically and molecularly distinct from cutaneous melanoma developing from melanocytes located in mucosal membranes. Little is known about its therapy. In this paper, we aimed to evaluate the results of immunotherapy and radiotherapy in a group of patients with advanced mucosal melanoma, based on the experience of five high-volume centers in Poland and Italy. There were 82 patients (53 female, 29 male) included in this retrospective study. The median age in this group was 67.5 (IQR: 57.25–75.75). All patients received anti-PD1 or anti-CTLA4 antibodies in the first or second line of treatment. Twenty-three patients received radiotherapy during anti-PD1 treatment. In the first-line treatment, the median progression-free survival (PFS) reached six months in the anti-PD1 group, which was statistically better than 3.1 months in the other modalities group (p = 0.004). The median overall survival (OS) was 16.3 months (CI: 12.1–22.3) in the whole cohort. Patients who received radiotherapy (RT) during the anti-PD1 treatment had a median PFS of 8.9 months (CI: 7.4–NA), whereas patients treated with single-modality anti-PD1 therapy had a median PFS of 4.2 months (CI: 3.0–7.8); this difference was statistically significant (p = 0.047). Anti-PD1 antibodies are an effective treatment option in advanced mucosal melanoma (MM). The addition of RT may have been beneficial in the selected subgroup of mucosal melanoma patients.
Keywords: mucosal melanoma; nivolumab; pembrolizumab; ipilimumab; radiotherapy mucosal melanoma; nivolumab; pembrolizumab; ipilimumab; radiotherapy

Mucosal melanoma (MM) is a rare disease epidemiologically and molecularly distinct from cutaneous melanoma (CM) developing from melanocytes located in mucosal membranes. Overall, MM represents about 1 to 1.5% of all melanoma cases and 0.03% of all diagnosed cancers [1,2,3]. MM incidence has been reported globally stable over the last 20 years [4,5]. MM is diagnosed twice more often in Caucasians than in populations with darker skin colors, including African Americans [6,7], but much rarer than in the Asian population. The risk of developing MM increases with age. The majority of patients diagnosed are 60 years of age and older. The median age at diagnosis is 70 years, except for MMs arising in the mouth that affect younger patients more frequently [6,8]. Anatomically, it is mostly diagnosed on the mucous membranes of the head and neck (31% to 55%), anus and rectum (17% to 24%) or the vulva and vagina (18% to 40%) and less frequently in the colon, throat, larynx, lungs, urinary tract, cervix, esophagus or gallbladder [3,8,9]. The incidence of MM is over 80% higher in women than in men due to the relatively high number of genital melanomas diagnosed in women [3]. Risk factors for developing MM are currently unknown since ultraviolet (UV) radiation and viral etiology—cytomegalovirus, Eppstein-Barr virus, human papillomavirus, human herpesvirus—have also been excluded. In MM, no environmental exposures nor carcinogenic viruses have been found pathogenic [10,11,12,13,14]. Unlike cutaneous melanoma, which is characterized by a UV signature, MM harbors distinct molecular features, including a lower incidence of v-Raf murine sarcoma viral oncogene homolog B (BRAF) oncogene mutations but a higher incidence of tyrosine-protein kinase KIT (CD117) oncogene mutations, suggesting different genetic etiologies. In general, MM harbors fewer nucleotide substitutions per cell than CM, but more gene amplifications and structural variants than CM; the cause of this chromosomal instability has not yet been clarified [3].
Mucosal melanomas are generally diagnosed in an advanced stage, though they are more aggressive and carry a worse prognosis regardless of the stage at diagnosis. The five-year overall survival (OS) rate for MM is only 25% regardless of stage [15]. Poor treatment results and shorter survival may be associated with a lack of early symptoms or signs, resulting in advanced disease at the time of diagnosis. Insidious anatomical localization, and often amelanotic presentation, result in difficult visual detection and challenging resections with wide, or even negative, margins impossible to achieve. Moreover, rich lymphatic drainage from the mucosal surfaces promote metastases [3,8,15]. MM metastases most often develop in the lungs (54%), liver (35%) and bone (25%) [16].
Due to its rare occurrence, undefined etiopathogenesis and unpredictable clinical course, there are no specific recommendations of MM treatment. Both the European Society for Medical Oncology (ESMO) and National Comprehensive Cancer Network (NCCN) guidelines focus on the important role of surgery and radiotherapy (RT) in this group of patients [2,17]. The preferred therapeutic strategy in MM is still surgical excision. Perioperative RT improves local control but does not improve overall survival (OS), probably because of the high rate of distant relapse [18,19,20]. RT with definitive intent can also provide satisfactory local control. Definitive RT should be considered in patients who are not candidates for extensive surgery or in cases where adequate resection margin cannot be achieved [21]. Proton therapy and heavy ions deserve special attention [22]. In a retrospective analysis of a cohort of patients with sinonasal MM, the authors observed a 62% five-year local control rate for proton therapy [23]. The understanding of multimodal treatment in MM comes mostly from CM data extrapolation. Phase III clinical trials focused only on MM patients are lacking. Phase III trials with all melanoma patients, regardless of subtype, do not provide satisfactory data on MM due to the low number of cases enrolled. The real-world data on the efficacy of antiprogram med cell death 1 (PD-1) therapies in patients with MM are scarce. Although a growing number of studies suggest the significant benefit of RT as a boost for immunotherapy (ITH) in CM, such observations in MM have not been reported. Therefore, this study aims to assess the efficacy of systemic therapy with the emphasis on ITH in the MM patient population treated outside of clinical trials, and to define the efficacy of the immunotherapy-radiotherapy combination in MM.

Eighty-two patients from the participating centers who met inclusion criteria were enrolled. The clinicopathological characteristics of patients and tumors are summarized in Table 1. The median follow-up, as estimated by the reverse Kaplan-Meier method, was 29.0 months (CI: 19.1–41.7). At the time of data analysis—August 2020, 30 (37%) patients remained alive on the treatment or in follow up. It is worth mentioning that in fourteen (17.1%) cases, the systemic treatment was initiated due to unresectable tumors without distant metastases (with the majority of cases in the head and neck region—ten). MM, located in the genitourinary system, was predominantly present in females (female to male ratio = 21:1); no such differences were observed in any other location. The BRAF V600 mutation was detected in 4/33 patients from the head and neck region and in 1/49 patients in other locations (rectum).

The median OS was 16.3 months (CI: 12.1–22.3) in the whole cohort. The 12-month and 18-month OS rates reached 61% (CI: 51–73%) and 41% (CI: 31–55%), respectively. There was no OS difference between patients who received anti-PD1 ITH or other treatments as first-line therapy (p = 0.7). Kaplan-Meier curves for OS are presented in Figure 2B. Men and patients with elevated LDH levels had a worse prognosis. None of the other preselected clinical factors had a significant influence on OS in this group of patients (Table 2).

In this international retrospective study, we included consecutive patients with confirmed histopathological diagnosis of unresectable or metastatic MM. Patients must have been treated with anti-PD1 (nivolumab or pembrolizumab) or anti-CLTA-4 (ipilimumab) antibodies as a first or second-line treatment. Cases were recruited in five high-volume centers in Poland (two centers) and Italy (three centers) between July 2013 and August 2020.

The response was evaluated every 12 weeks in the contrast-enhanced CT scan of the primary tumor site, thorax, abdomen, and pelvis, and contrast-enhanced magnetic resonance imaging (MRI) for lesions in the central nervous system. Response to the treatment was assessed using response evaluation criteria in Solid Tumors 1.1 (RECIST). Objective response (OR) was defined as the sum of the number of patients who archived partial response (PR) or complete response (CR) as their best response. Disease control (DC) was defined as a sum of patients who archived stable disease (SD), PR or CR as their best response. Progression-free survival (PFS) was calculated from the start of treatment first dose to the disease progression, as assessed according to RECIST 1.1, or death. Patients who had at least stable disease (SD) at the last follow-up were censored. The overall survival (OS) was calculated from the start date of first-line treatment to the date of death. The OS from the start of anti-PD1 was also calculated. In both cases, patients alive at the last follow-up were censored.

The continuous variables were summarized by median and interquantile range (IQR), while categorical variables were summarized by count and percentage of total cases. All point estimates were reported with a 95% confidence interval (CI) unless stated otherwise.
The Kaplan-Meier estimator with the log-rank test, as well as the Cox proportional hazard model, were used for the survival analysis. Fisher’s exact test was used to assess for independence between categorical variables.
All analyses were performed in the R language environment version 3.6.3 (The R Foundation for Statistical Computing) with abundant use of tidyverse and survminer packages [51,52,53,54]. A p ≤ 0.05 was deemed statistically significant.

This study was approved by Bioethical Committee at Maria Sklodowska-Curie National Research Institute of Oncology in Warsaw under the registration number 73/2018.

To our knowledge, this is the largest analysis of data to date for anti–PD-1 therapy combined with analysis of the radiation therapy impact on immunotherapy efficacy in mucosal melanoma. Anti-PD1 antibodies are an effective treatment in advanced MM. The addition of RT to ITH may be beneficial in the selected subgroup of MM patients.

The following are available online at https://www.mdpi.com/2072-6694/12/11/3131/s1. Supplement A table: Details regarding Radiotherapy during anti-PD1 treatment. Supplement B: Comparison of (A) progression-free survival and (B) overall survival between mucosal melanoma and Polish general melanoma cohort. Supplement C: PFS and OS in patients treated with radiotherapy with concomitant immunotherapy, chemotherapy of BRAFi/MEKi.

This work has been supported by Maria-Sklodowska Curie National Research Institute of Oncology statutory funding. 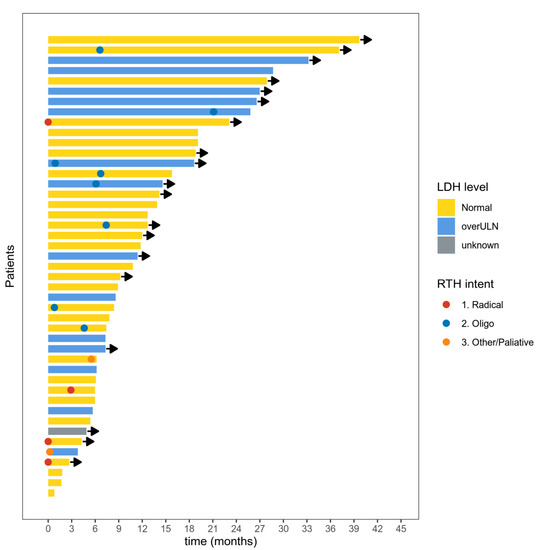 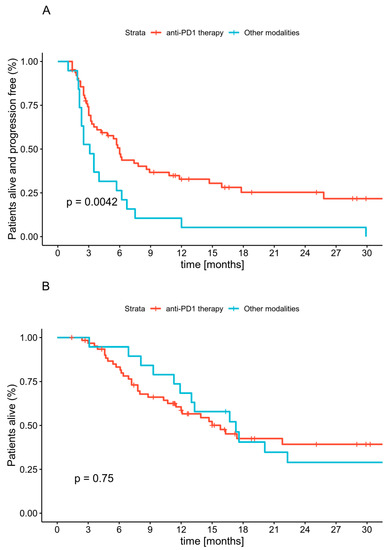 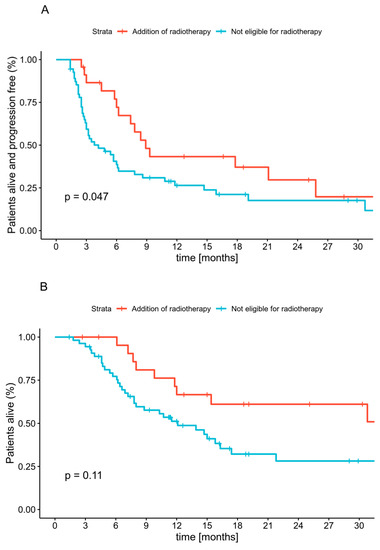 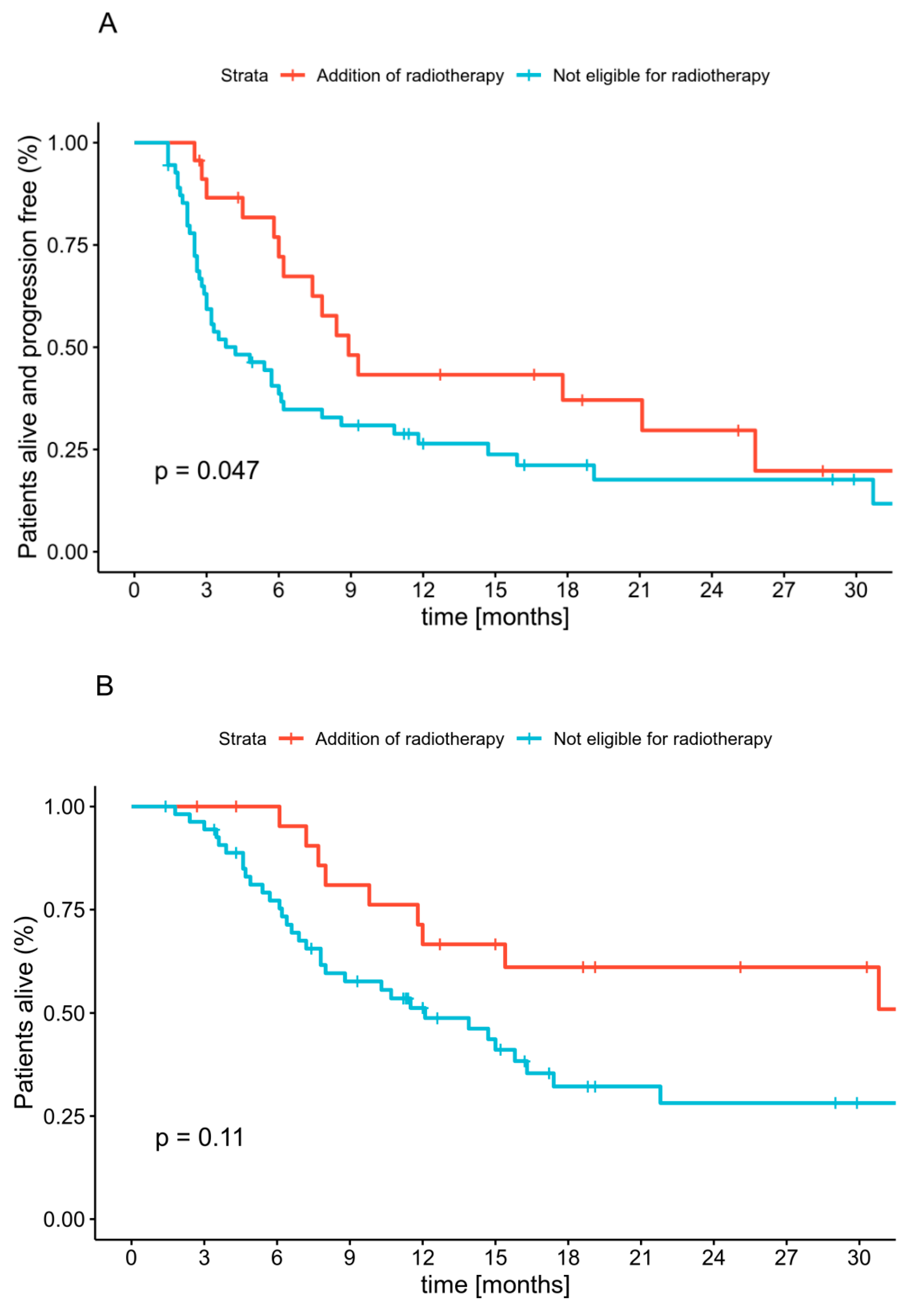