Disulfiram/copper (DSF/Cu) is a promising antitumor reagent for clinical application due to its excellent anticancer activity and safety. However, the anticancer mechanism of DSF/Cu has not been fully elucidated. Our study showed that DSF/Cu strongly induced cytotoxic effects on both nasopharyngeal carcinoma (NPC) cells and α-smooth muscle actin (α-SMA)-positive fibroblasts. Fluorescence activated cell sorting (FACS) analysis further showed that DSF/Cu induced a higher late apoptosis rate in α-SMA-positive fibroblasts than in tumor cells, and DSF/Cu promoted apoptosis and necrosis by an aldehyde dehydrogenase (ALDH)-independent method. Furthermore, we found that the antitumor activity of DSF/Cu against NPC cells occurred through ROS/MAPK and p53-mediated ferroptosis pathways, and that the ROS scavenger N-acetyl-l-cysteine (NAC) could reverse the cellular and lipid ROS levels. In 5-8F xenografts, both TUNEL and immunohistochemical (IHC) analyses indicated that DSF/Cu could induce apoptosis and inactivate cancer-associated fibroblasts (CAFs) by inhibiting the expression of α-SMA. In addition, combined with cisplatin (CDDP), DSF/Cu was well tolerated in vivo and could significantly suppress the growth of NPC tissues. Our study demonstrated that DSF/Cu induced antitumor activity against both tumor cells, as well as CAFs and suggested that the use of DSF/Cu as an adjunctive therapy for NPC is worthy of consideration. View Full-Text
Keywords: nasopharyngeal cancer (NPC); (disulfiram/copper) DSF/Cu; apoptosis; ferroptosis; cancer-associated fibroblasts (CAFs) nasopharyngeal cancer (NPC); (disulfiram/copper) DSF/Cu; apoptosis; ferroptosis; cancer-associated fibroblasts (CAFs)
►▼ Show Figures 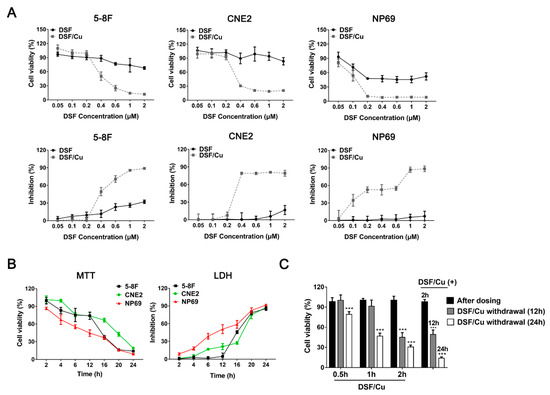