The survival of patients with pancreatic ductal adenocarcinoma (PDAC) is closely related to recurrence. It is necessary to classify the risk factors for early recurrence and to develop a tool for predicting the initial outcome after surgery. Among patients with resected resectable PDAC at Samsung Medical Center (Seoul, Korea) between January 2007 and December 2016, 631 patients were classified as the training set. Analyses identifying preoperative factors affecting early recurrence after surgery were performed. When the p-value estimated from univariable Cox’s proportional hazard regression analysis was <0.05, the variables were included in multivariable analysis and used for establishing the nomogram. The established nomogram predicted the probability of early recurrence within 12 months after surgery in resectable PDAC. One thousand bootstrap resamplings were used to validate the nomogram. The concordance index was 0.665 (95% confidence interval [CI], 0.637–0.695), and the incremental area under the curve was 0.655 (95% CI, 0.631–0.682). We developed a web-based calculator, and the nomogram is freely available at http://pdac.smchbp.org/. This is the first nomogram to predict early recurrence after surgery for resectable PDAC in the preoperative setting, providing a method to allow proceeding to treatment customized according to the risk of individual patients. View Full-Text
Keywords: pancreatic cancer; pancreatic ductal adenocarcinoma; recurrence; nomogram; neoadjuvant therapy pancreatic cancer; pancreatic ductal adenocarcinoma; recurrence; nomogram; neoadjuvant therapy
►▼ Show Figures 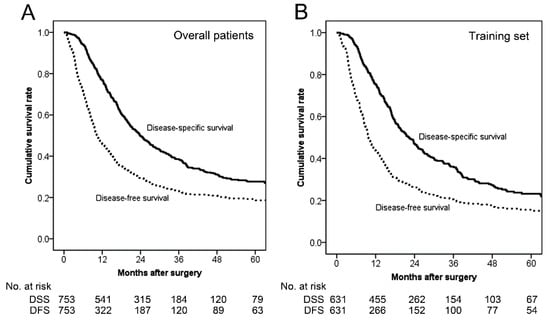