In BRAFV600mut metastatic melanoma, the combination of BRAF and MEK inhibitors (BRAFi, MEKi) has undergone multiple resistance mechanisms, limiting its clinical benefit and resulting in the need for response predicting biomarkers. Based on phase III clinical trial data, several studies have previously explored baseline genomic features associated with response to BRAFi + MEKi. Using a targeted approach that combines the examination of mRNA expression and DNA alterations in a subset of genes, we performed an analysis of baseline genomic alterations involved in MAPK inhibitors’ resistance in a real-life cohort of BRAFV600mut metastatic melanoma patients. Twenty-seven patients were included in this retrospective study, and tumor samples were analyzed when the BRAFi + MEKi therapy was initiated. The clinical characteristics of our cohort were consistent with previously published studies. The BRAFi + MEKi treatment was initiated in seven patients as a following-line treatment, and had a specific transcriptomic profile exhibiting 14 genes with lower mRNA expression. However, DNA alterations in CCND1, RB1, and MET were only observed in patients who received BRAFi + MEKi as the first-line treatment. Furthermore, KIT mRNA expression was significantly higher in patients showing clinical benefit from the combined therapy, emphasizing the tumor-suppressor role of KIT already described within the context of BRAF-mutant melanoma. View Full-Text
Keywords: metastatic melanoma; BRAF inhibitor; MEK inhibitor; baseline genomic alterations metastatic melanoma; BRAF inhibitor; MEK inhibitor; baseline genomic alterations
►▼ Show Figures 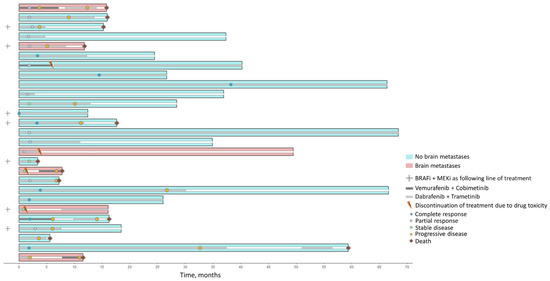