The search for effective methods of cancer treatment and prevention has been a continuous effort since the disease was discovered. Recently, there has been increasing interest in exploring plants and fruits for molecules that may have potential as either adjuvants or as chemopreventive agents against cancer. One of the promising compounds under extensive research is nobiletin (NOB), a polymethoxyflavone (PMF) extracted exclusively from citrus peel. Not only does nobiletin itself exhibit anti-cancer properties, but its derivatives are also promising chemopreventive agents; examples of derivatives with anti-cancer activity include 3′-demethylnobiletin (3′-DMN), 4′-demethylnobiletin (4′-DMN), 3′,4′-didemethylnobiletin (3′,4′-DMN) and 5-demethylnobiletin (5-DMN). In vitro studies have demonstrated differential efficacies and mechanisms of NOB and its derivatives in inhibiting and killing of colon cancer cells. The chemopreventive potential of NOB has also been well demonstrated in several in vivo colon carcinogenesis animal models. NOB and its derivatives target multiple pathways in cancer progression and inhibit several of the hallmark features of colorectal cancer (CRC) pathophysiology, including arresting the cell cycle, inhibiting cell proliferation, inducing apoptosis, preventing tumour formation, reducing inflammatory effects and limiting angiogenesis. However, these substances have low oral bioavailability that limits their clinical utility, hence there have been numerous efforts exploring better drug delivery strategies for NOB and these are part of this review. We also reviewed data related to patents involving NOB to illustrate the extensiveness of each research area and its direction of commercialisation. Furthermore, this review also provides suggested directions for future research to advance NOB as the next promising candidate in CRC chemoprevention. View Full-Text
Keywords: nobiletin; colorectal cancer; chemoprevention; bioactivities nobiletin; colorectal cancer; chemoprevention; bioactivities
►▼ Show Figures 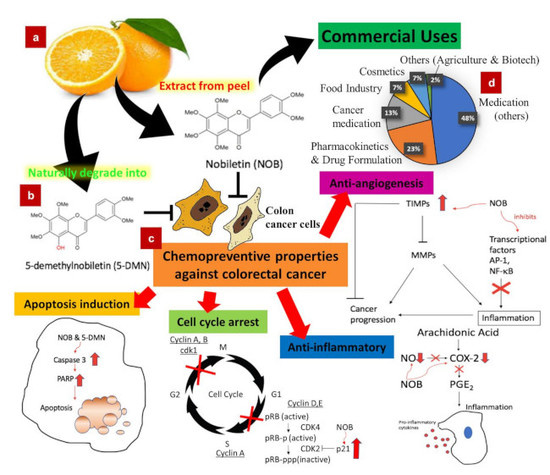